OhNo! ransomware is after your files 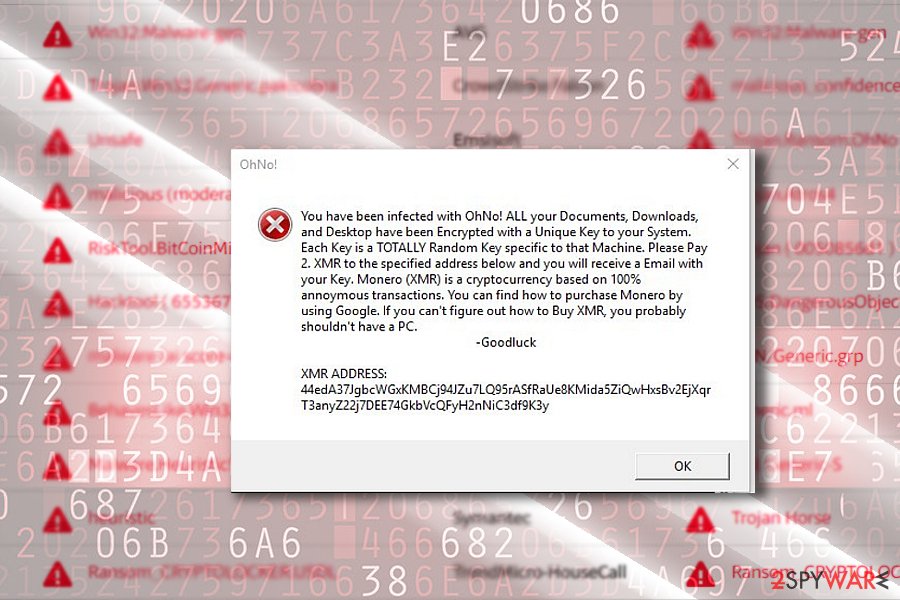 OhNo! virus operates as ransomware which is designed to encode files. Currently, it is still under development as not all samples of the malware encrypt data. Nonetheless, the virus appends .ohno file extension. It still manages to infiltrate systems and demands ransom. Here are the key features of the threat:

Though the virus does not function at its full power, remove OhNO! virus right away. Reimage Reimage Cleaner Intego or Malwarebytes will be helpful in this situation.

While the virtual infection does not operate as a full-fledged malware yet, it surely contains the potential to become such. After the infiltration, OhNo! virus generates multiple system and shell processses[2], such as:

Later on, it reads system registry files and further technical information about the system. It also launches Mount Point Manager and looks for other malware present on the system.  Additionally, the malware connects to Local Procedure Call (LPC ) port. It may hide in [random number].rar older.

Naturally, due to its activity, the overall PC performance highly deteriorates. Such behavior lets us assume that the malware currently performs the role of data collector rather than attempts to inflict damage.  Nonetheless, the crypto-malware also has a tendency to delete some files. After it completes its preparations, the error message called “OhNo!” pops up. Here is a short extract from it:

You have been infected with OhNo! ALL your Documents, Downloads, and Desktop have been Encrypted with a Unique Key to your System.(…) Please Pay 2.XMR to the specified address below and you will receive a Email with your Key.

Currently, the threat demands 2 XMR which approximately amounts to 276 USD. Since it is still under development, we discourage you from transmitting the money. Instead, focus on OhNo! removal.

Ways to get infected with a file-encrypting threat

Regarding the features of the malware, it tends to target systems with weak Remote Desktop Protocols (RDP). However, since it may also come into a system in .rar file, it suggests that spam emails are an additional distribution option.

You should not also exclude the possibility that the malware may dwell in a corrupted application. Thus, in order to lower the possibility of OhNo! malware hijack, make sure to update your security application, regularly scan the device and beware of the visited websites as well as downloaded software. 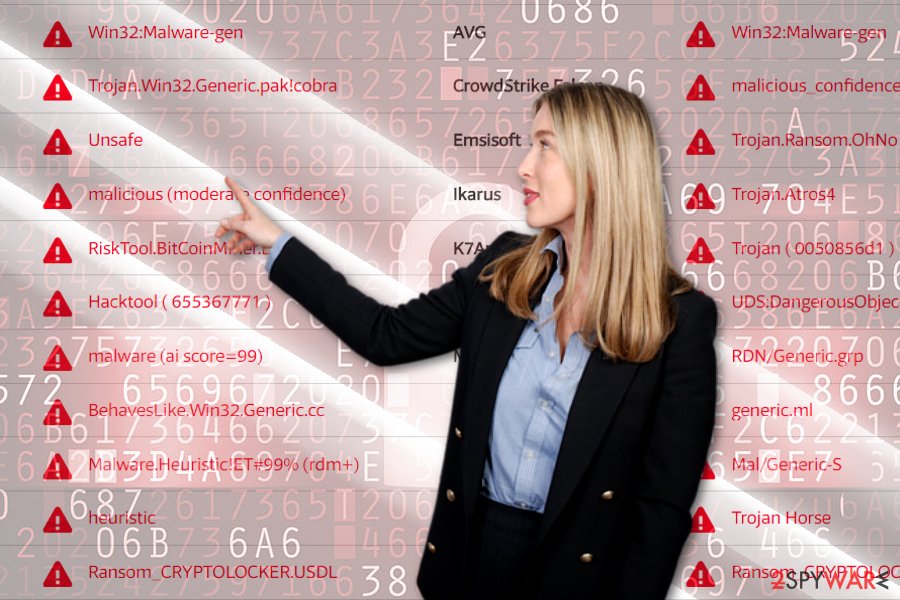 OhNo! ransomware now may look weak but it surely has the potential to become a destructive crypto-virus

As most of ransomware threats, this threat also targets Windows. You should be able to remove OhNo! virus with the assistance of anti-virus and malware elimination utilities. However, due to the activity of the threat, it is not surprising if you will not be able to launch the tools.

If you encounter OhNo! removal problems, launch the operating system in Safe Mode, Further instructions are displayed below. Try to terminate its processes via Task Manager as well. Note that OhNo! ransomware targets non-native English speakers, such as Danish[3] users as well.

Reboot the system in Safe Mode and then launch an anti-malware tool to get rid of OhNo! malware. Since the malware may not encypt files, make haste to eradicate it.

Guide which is presented above is supposed to help you remove OhNo! from your computer. To recover your encrypted files, we recommend using a detailed guide prepared by 2-spyware.com security experts.

If your files are encrypted by OhNo!, you can use several methods to restore them:

The benefits of Data Recovery Pro

This tool is designed to help you restore damaged and lost files. It might come in handy recovering files affected by ransomware.

It is another alternative to restore encrypted data as the program uses volume shadow copies automatically generated by the operating system and, likewise, recreates the copies of the original files.

Finally, you should always think about the protection of crypto-ransomwares. In order to protect your computer from OhNo! and other ransomwares, use a reputable anti-spyware, such as Reimage Reimage Cleaner Intego, SpyHunter 5Combo Cleaner or Malwarebytes

You can quickly scan the QR code with your mobile device and have OhNo! ransomware virus manual removal instructions right in your pocket.