Poweliks virus is a fileless infection that is hard to remove 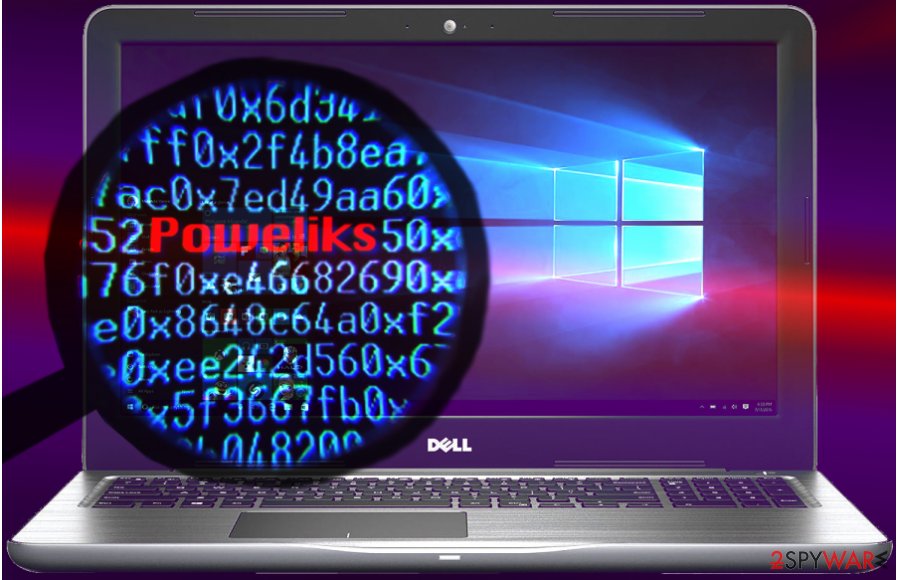 Powerliks virus (also known as Trojan.Poweliks, Trojan.Poweliks!gm, etc.) is a dangerous trojan horse[1]. Unlike regular viruses, it does not create a physical file on the operating system in order to operate. Instead, it injects a malicious code into a legitimate Windows process that is already running on the system and avoids detection this way.

At the moment of writing, it is capable of affecting only those machines that use Windows OS. Nevertheless, viruses are updated each day, so there is no guarantee that this threat won't start infecting other machines in a very near future. Just like with any other trojan horse, we highly recommend avoiding such threats as Trojan.Powerliks because they can be used for a long list of malicious activities.

In most of the cases, Powerliks virus can be used for infecting your PC system with related malware. In addition, it can also launch it, download its updates and initiate other dangerous activities that can be received from a remote attacker.

Usually, the Powerliks Trojan performs click-fraud operations. It repeatedly connects to various domains and loads advertisements from them. The malicious virus interacts with these advertisements without user's knowledge and this way earns money for its developers by using victim's computer's power and Internet connection.

The most obvious sign showing that Poweliks is already hiding in your PC system is the appearance of DLLHOST.exe, dllhst3g.exe, dllhost.exe *32, dllhst3g.exe *32 and similar entries in your Task Manager.

You probably already noticed that the malicious virus tends to obfuscate its presence by infecting legitimate processes and making them run malicious tasks. This helps the malware avoid detection and, obviously, instant removal even if the user is running a security software. However, DieViren.de experts say[2] that if you are using an anti-malware software that is up-to-date, you should not have any problems with Poweliks removal.

In addition, you can notice that your PC is slower than it used to be, programs are taking more time when you are trying to launch them, some part of legitimate websites are unreachable, etc. If these issues are already bothering you, you should run a full system scan with Reimage Reimage Cleaner Intego or other reputable anti-spyware and remove Poweliks virus immediately. 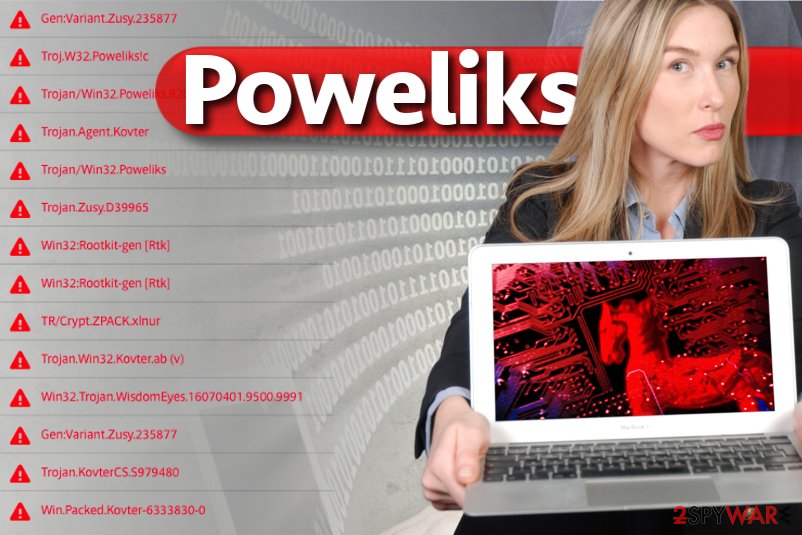 Poweliks virus is a click-fraud Trojan that is also considered to be a fileless infection. It affects legitimate Windows processes without leaving no physical files on the compromised system.

According to various security experts, this threat is mostly spread using Trojan.Mdropper. This trojan can be downloaded from illegal websites that are typically used for spreading various viruses. Also, this cyber infection can easily try to infect your PC via spam, misleading notifications and similar ways of distribution, so we highly recommend avoiding mails that report about unexpected prizes and winnings.

In addition, you should also stay away from ads offering you to update your Flash Player, FLV Player and similar programs. For that you should use only official websites of programs. Finally, in order to stay safe, you should always keep your PC protected as it should be.

This means that you should make sure that you have not only anti-virus installed on your machine. You should also install a reputable anti-spyware and try to keep it up-to-date. This will help you to avoid security vulnerabilities and will also prevent infiltration of such threats like this one.

The Trojan is still active today, so if you want to remove Poweliks 2017 virus, consider installing an up-to-date anti-malware software. If you want to make sure that your PC is safe, you should run a full system scan with one of these programs: Reimage Reimage Cleaner Intego, SpyHunter 5Combo Cleaner, Malwarebytes. Make sure you use updated versions in order to remove all suspicious files form your computer.

We do not advise you to try to perform Poweliks removal manually as this requires specific computing skills. The described Trojan is considered to be a fileless infection[3] which means that it is not enough to delete some files from the system to get rid of it. To completely fix the damage done by the malicious software, use automatic malware removal programs.

To successfully remove Poweliks, use the provided directions to restart your computer into a right mode for malware removal.

Finally, you should always think about the protection of crypto-ransomwares. In order to protect your computer from Poweliks and other ransomwares, use a reputable anti-spyware, such as Reimage Reimage Cleaner Intego, SpyHunter 5Combo Cleaner or Malwarebytes

You can quickly scan the QR code with your mobile device and have Poweliks virus manual removal instructions right in your pocket.