Tarmac virus (aka OSX/Tarmac) is a trojan virus that is delivered via OSX/Shlayer.D malware that is a recent version of OSX/Shlayer.[1] According to the latest research,[2] Tarmac virus is brought to macOS machines via fake Adobe Flash Player upgrades that distribute OSX/Shlayer.D. The trojan appears on the system as the 1.74 MB AdobeFlashPlayerInstaller.dmg file that is encrypted by using the SHA-256 algorithm. Nevertheless, the fake update comes signed by a non-existing person named Fajar Budiato and misuses an original Apple developer certificate coded 2L27TJZBZM. In addition, 27 AV engines find the fake Flash Player update file malicious.[3]

Tarmac virus gets downloaded to a macOS system once OSX/Shlayer.D malware connects to a C&C server. Afterward, the malicious installation process begins and executes the trojan through this directory:  Player.app/Contents/Resources/Player.app/Contents/MacOS/CB61E0A8408E by using administrative rights.

Continuously, Tarmac virus tries to get the victim to type in the administrator's password and if that is done, a fake Adobe Flash Player installer is displayed via WebView. Keep in mind that the trojan virus would be able to access the macOS nevermind if the password has been entered by the user himself or not. Tarmac trojan is coded to steal passwords, other login details, and supposedly storing the data on some type of remote server. 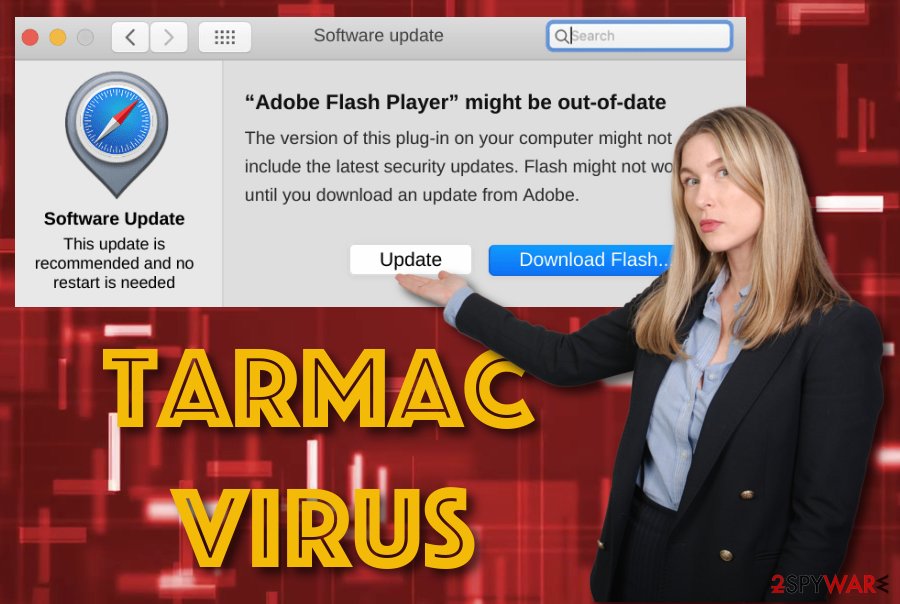 Furthermore, there are many dangerous tasks that can be carried by Tarmac virus later on. This malware might slightly increase the power of your CPU and GPU, damage some files or software that is found on your macOS, install other viruses and infections, run multiple damaging processes in the background.

Additionally, Tarmac virus might introduce itself by harvesting the credentials and personal data that you have stored on your computer system. Afterward, the information might be used for identity theft or you might discover some private detail put up for sale on the Dark Web as this technique remains to be a great income source for some hackers.

Nevertheless, Tarmac virus might get hold of your Apple ID passwords, take screenshots, gain access to your camera or microphone, forcibly open browser windows that will prompt you to download some camouflaged products that are truly hidden malware. Also, some trojans support cryptocurrency mining activity and run a specific module to collect Bitcoin, Lite coin or another type of digital currency on the infected PC by overusing its resources, including the CPU power.

If you ever spot this trojan in your macOS, you have to react immediately and remove Tarmac virus from the computer as soon as possible. If you do not really know if the malware has been hidden on your system, you can launch a thorough checkup with ReimageIntego, SpyHunter 5Combo Cleaner or similar software to find out all the issues.

Tarmac removal should be performed only by using automatic removal software, otherwise, you can cause severe to your machine or its software. Additionally, you take some risks of missing crucial infection sources. If any type of malicious component remains on the system, the trojan virus can repeatedly appear on your computer after the next startup process. 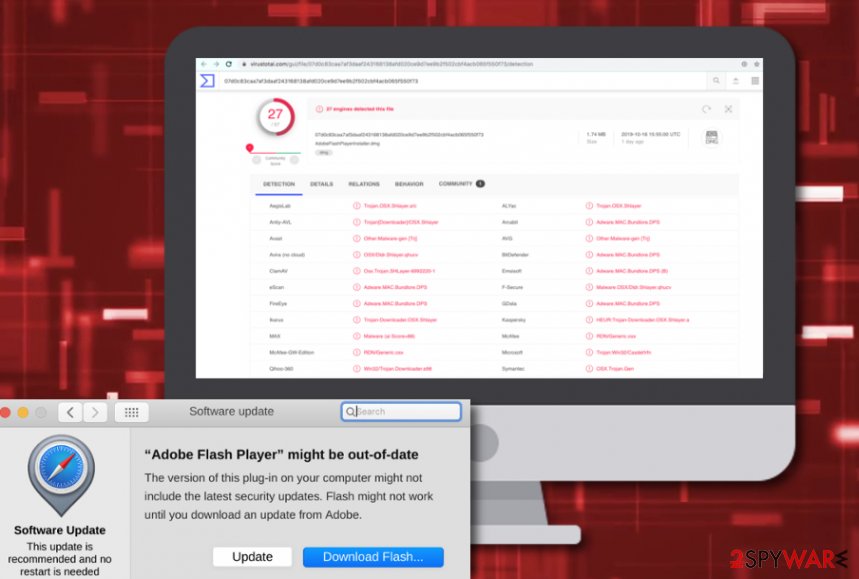 Trojan infections can be easily distributed through potentially unwanted programs such as adware. These odd apps might provide you with fake Adobe Flash Player installers that are known to include malware very often. Criminals like to camouflage their malware behind different app upgrades to give it a look of legitimacy.

You should keep all of your software regularly updated and always check on official reports about recently released updates. Continuously, include a strong antimalware program on your computer so that you will be informed if some type of camouflaged malware tries to sneak into your system unnoticed.

However, there are more ways of how trojan viruses might end up on your computer. These cyberthreats can be delivered through email spam that pretends to come from a reliable banking or healthcare-related organization. The malicious payload often comes inserted in an executable or word file that is attached to the bogus email message.

Last but not least, you should be aware of p2p sources such as The Pirate Bay or eMule as here you can get various cracked software and movies for free. Some criminals are likely to misuse these websites as they lack the required security.

Do NOT try to remove Tarmac virus or any other trojan horse, ransomware or a similar complicated threat on your own. There are numerous malicious components that can be spread all over the computer system. If you mix such a component with the legit file, you can run into more problems.

To get rid of infectious components, we recommend using SpyHunter 5Combo Cleaner or Malwarebytes. Make sure you update these apps before a scan to see if they can find the threat completely. To complete the Tarmac removal process, employ ReimageIntego. Once the software finds virus damage for you you can continue with the automatical elimination.

According to experts from LosVirus.es,[4] malware such as Tarmac trojan might be able to boot up automatically during every new computer startup process. This is the main reason why it is so important to eliminate all virus-related content at once. If you leave at least one infectious object, you might experience the same malware attack once you boot your PC again.

Disable the malware by rebooting to Safe Mode with Networking. Use the following guide for that:

To get a chance to run anti-virus, perform System Restore on your computer:

Finally, you should always think about the protection of crypto-ransomwares. In order to protect your computer from Tarmac and other ransomwares, use a reputable anti-spyware, such as ReimageIntego, SpyHunter 5Combo Cleaner or Malwarebytes

You can quickly scan the QR code with your mobile device and have Tarmac virus manual removal instructions right in your pocket.