Trojan-spy.win32.agent.gen – dangerous malware that can be untraceable for a long time 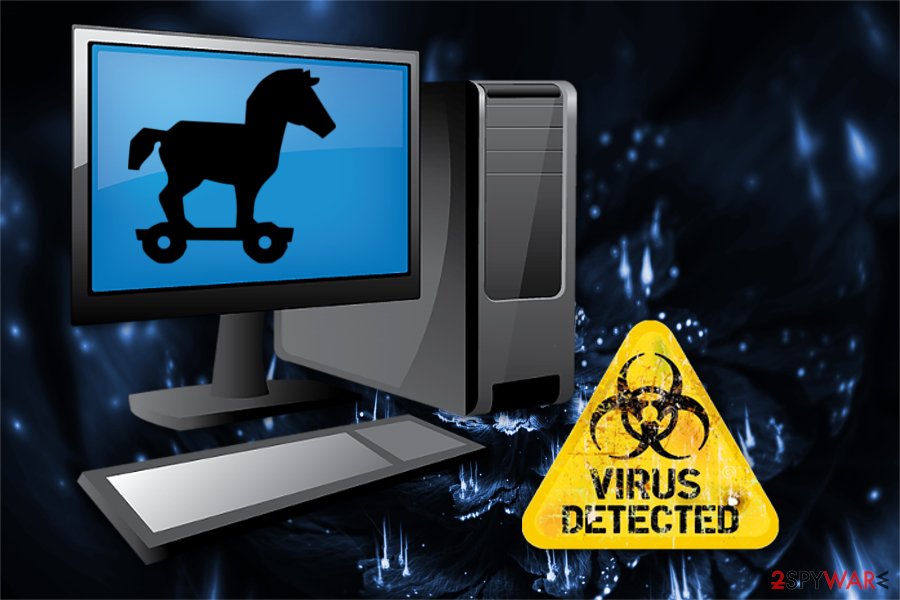 Trojan-spy.win32.agent is a generic name that describes a group of dangerous trojan horses that can perform malicious activities on the affected computer. Such cyber threats can sneak into machines unnoticed, can hide deep in the system and do harmful activities in the background. Trojan horses might be capable of stealing personal information, such as passwords/logins, banking or credit card information. Additionally, they might be used for malware, ransomware or spyware installation.

Trojan-spy.win32.agent.gen virus is one of the variants of a huge group of trojan horses[1] called Win32/Agent. Nevertheless, authors of such cyber threats try to create malware that can avoid detection; the major security vendors can still identify them. Among the most popular detections are these three versions of the trojan:

Trojan horses that belong to the same family share similar functionality. However, they contain some specific features and are created for different reasons. Some of the viruses are created for stealing information, and others are used for opening a backdoor for other cyber threats. Trojan-spy.win32.agent.gen might be used for the following reasons:

In order to perform these and many other activities, Trojan-spy.win32.agent needs to find its way to get into the system. However, these cyber threats cannot get into the machine without user's participation. Usually, developers of malware trick people into downloading obfuscated programs or updates. Also, trojan might spread via malicious spam emails or ads.

Once it gets into the computer, malware immediately makes system changes. Usually, it modifies Windows registry, deletes or creates new registry keys in order to boot on startup or disable computer's protection. Due to these changes, the affected machine becomes sluggish, programs unresponsive and countless system error messages might pop on the screen as well.

Some versions of Trojan-spy.win32.agent might also disturb browsing activities by displaying aggressive ads and preventing from accessing security-related websites. The latter trick helps malware to remain on the system longer because users are unable to install needed tools for the elimination.

However, Trojan-spy.win32.agent.gen removal has to be completed despite resistant trojan's behavior. For this task, you will need to install anti-malware program and scan the affected machine. In order to do so, you may need to boot the computer to Safe Mode with Networking. This helps to disable the virus and complete automatic elimination with Reimage Reimage Cleaner Intego or other reputable software.

Please do not try to remove Trojan-spy.win32.agent.gen manually. It's nearly impossible to clean all malicious files and programs from the machine. Trojan horses are complex cyber threats and might bring other malware to the system. So, you should rely on powerful anti-malware tools to make the system safe again. 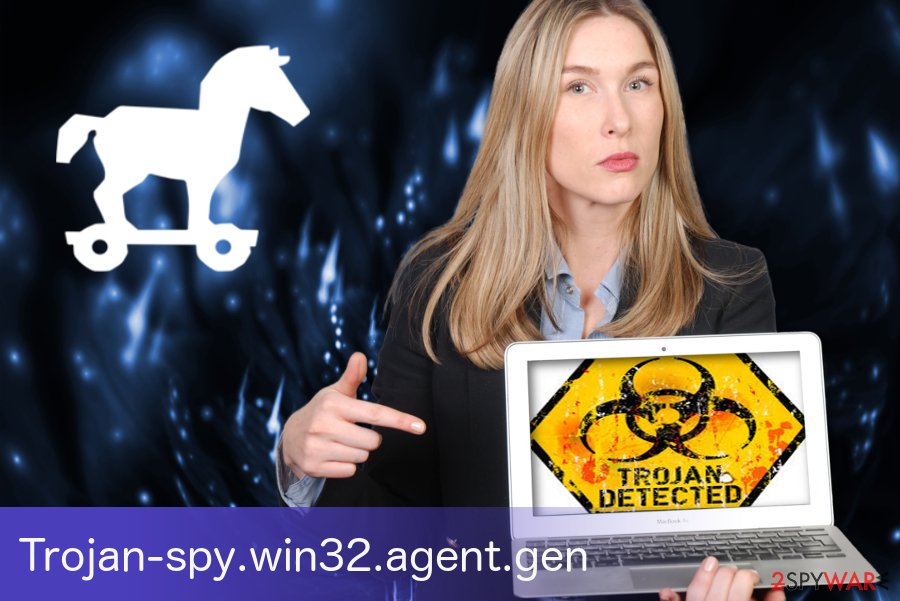 Trojan-spy.win32.agent.gen virus can exist on your computer longer that you think.

The name “trojan horse” itself reveals the main way how these malicious programs spread. They look like safe and legitimate files, programs or updates that users can download from the Internet. Developers of trojans use various strategies to trick users into letting malware into the system. Specialists from Les Virus[2] infrom about the most popular methods:

Thus, it's important to be careful when browsing online in order to avoid cyber infections. Always use legit download sources, stay away from suspicious ads and emails. Installing and regularly updating security program is also needed for computer's protection.

Trojan-spy.win32.agent.gen removal is not that easy, so we do not recommend any attempts of removing this virus yourself. As we have already mentioned, it may have installed various components and affected system processes, so it is nearly impossible to find and delete all these components manually.

In order to remove Trojan-spy.win32.agent.gen correctly, you need to use professional and powerful malware removal software, such as Reimage Reimage Cleaner Intego, SpyHunter 5Combo Cleaner and Malwarebytes. Once you download security software, update it and run a full system scan. If you cannot download or run security software, you have to reboot your computer to Safe Mode with Networking. You can find the guide below.

System Restore method is another way to disable trojan and run security software for virus elimination:

Finally, you should always think about the protection of crypto-ransomwares. In order to protect your computer from Trojan-spy.win32.agent and other ransomwares, use a reputable anti-spyware, such as Reimage Reimage Cleaner Intego, SpyHunter 5Combo Cleaner or Malwarebytes

Your opinion regarding Trojan-spy.win32.agent Cancel reply

You can quickly scan the QR code with your mobile device and have Trojan-spy.win32.agent manual removal instructions right in your pocket.