UNP Campaign Manager is a malware that causes slow performance, freezes, and crashes on your system, but also can lead to privacy issues and other infiltrations 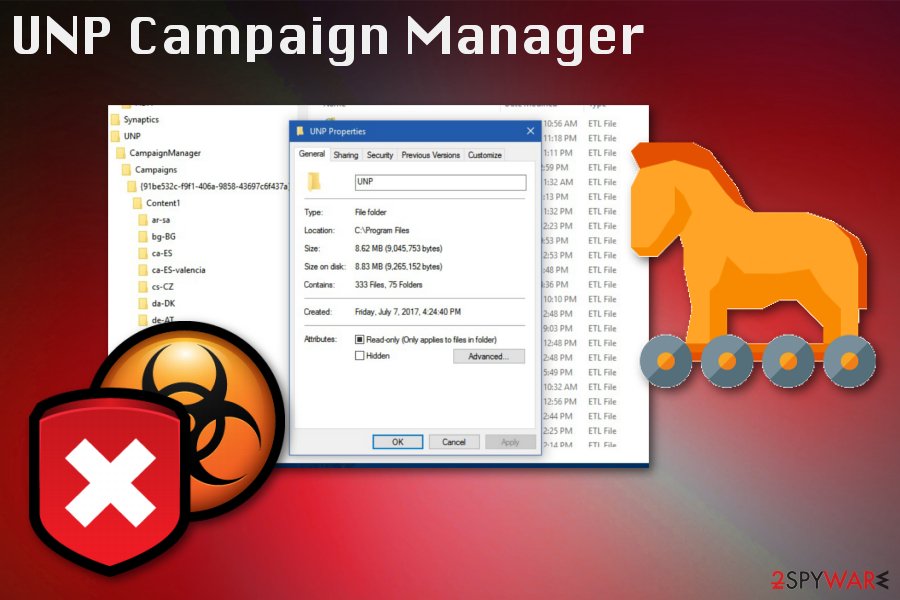 UNP Campaign Manager is the type of malware associated with Game Cracker developed by Dark Bay Ltd. This cyber threat is launching as an executable file also known as UNP.exe or UNPCampaignManager.exe. This file is not belonging to the Windows operating system because it is a trojan horse – one of the most dangerous cyber threats.[1] Users complain about the associated processes appearing on the system or in Task Manager and often causing additional issues with the device. Sometimes it even occurs after the OS update and leaves users' puzzled why these errors appear.[2] The trojan may be hidden in system folders or other common directories to convince people that this executable is a legitimate application and there is no need to delete it. Nevertheless, you need to remove UNP Campaign Manager ASAP and terminate all processes to end the unwanted activity.

Although the process UNP CampaignManager belongs to software which runs on the Microsoft Windows operating system, this file is not an essential part of the Windows system. This UNP.exe file is associated with the Game Cracker application and contains step-by-step instructions that the computer needs to follow to launch the function or a program.

Often such formats of the file get used by malicious actors to proliferate various questionable purposes. UNP Campaign Manager virus might be the result of such collaboration. When this threat gets on the system, it causes various errors related to processes that run on the device or the executable itself.

These messages can appear on the screen during program installation when the malicious executable is related to the program. Know that these errors indicate about UNP Campaign Manager trojan infection which can cause further damage to your machine because trojan horses often used as tools to distribute other malicious programs or even as backdoors.[3] 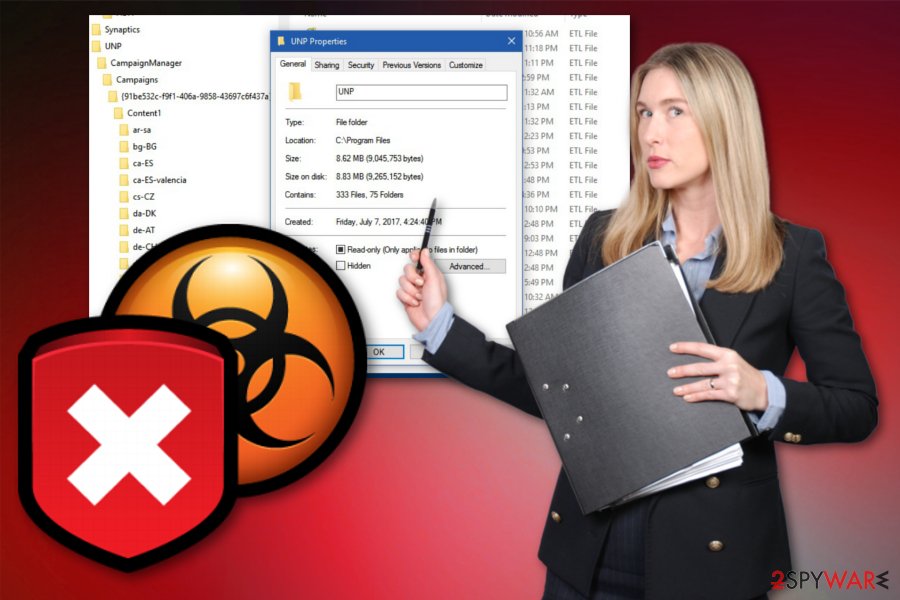 UNP Campaign Manager is the virus that also can be found on the system as UNPCampaignManager.exe or other executables. This common type of file helps to hide malicious purposes.

Unfortunately, when you leave UNP Campaign Manager or any similar trojan/malware running on the computer, it causes changes to your machine that include Windows registry entry alterations, virus infiltration or disabling security software. Also, various other suspicious programs can be installed by this threat and cause conflict with existing features or applications.

Make sure to clear the system from any trojan-related programs or applications and files. Since this is a complicated procedure, we offer using anti-malware tools for UNP Campaign Manager removal. This way you can check the system thoroughly.

To remove UNP Campaign Manager entirely it is not enough to end the process on Task Manager or delete the executable, this process requires a full system check and virus termination because this trojan has a bunch of other files and programs added on the affected computer. Employ ReimageIntego or any similar tool and check the system for virus damage or additionally corrupted files.

Various types of file formats are commonly used on the device and found on a daily basis. Unfortunately, this information is useful for malicious actors too because they develop products based on this fact and deliver their malware programs thinking about users' habits.

Maliciously infected documents, archives, PDFs or executables get attached to emails with subject lines like:

When the sender is disguised as the name of a well-known service or company these emails look safe and non-suspicious. However, when you download the attachment and open it on the system, you get the suggestion to enable the content. This is the step where you trigger a malicious script and payload dropper launches malware on your machine leading to cyber infiltration.

Since the UNP Campaign Manager virus causes various errors and system changes, manual virus termination is not advisable. You need to find all associated files, processes, and programs that may seem non-related in the first place, so it takes time.

The best option for UNP Campaign Manager removal is the automatic method using anti-malware tools and programs like ReimageIntego, SpyHunter 5Combo Cleaner, or Malwarebytes. This software runs on the system and checks all the places for malicious activities, malware or any additional corrupted files.

It may be challenging to remove UNP Campaign Manager due to the changes in the system registry or other startup files. For this reason, we have a few suggestions, for example, rebooting PC in the Safe Mode. This way you can be sure that the antivirus program is running as it should.

Finally, you should always think about the protection of crypto-ransomwares. In order to protect your computer from UNP Campaign Manager and other ransomwares, use a reputable anti-spyware, such as ReimageIntego, SpyHunter 5Combo Cleaner or Malwarebytes

You can quickly scan the QR code with your mobile device and have UNP Campaign Manager manual removal instructions right in your pocket.