Upd is a malicious program which belongs to Trojan.Kryptic.AD infection 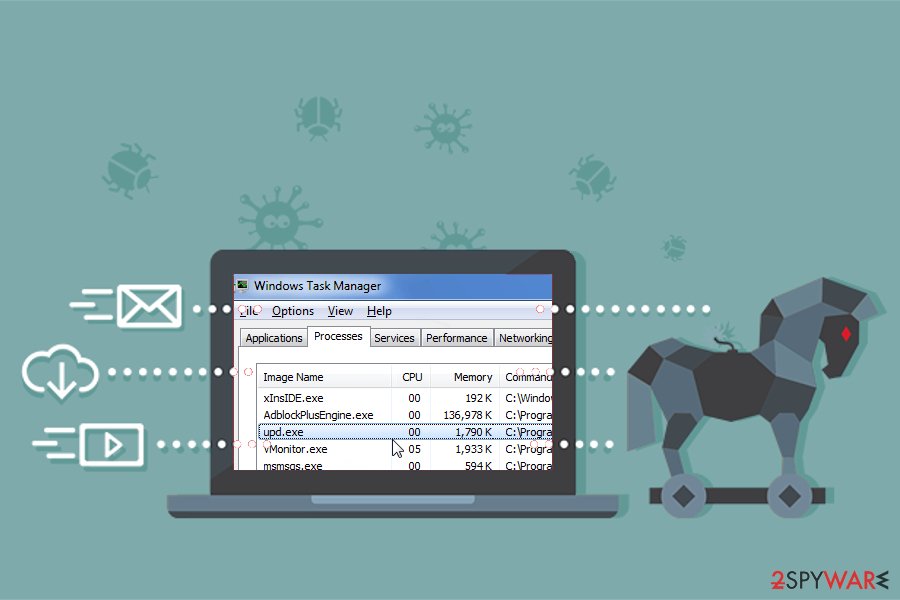 Upd is a Trojan horse which is often identified as Trojan.Kryptic.AD by antivirus tools. Usually, this malicious program can sneak into the system as Upd.exe file via spam emails, or together with rogue software downloads. Experts report that this cyber threat might record keystrokes, take desktop screenshots or run bogus commands on the system[1]. Thus, users should remove Upd if it is detected on their computers.

Upd.exe Trojan mostly targets Windows operating systems. According to the analysis, Upd.exe resides in C:\Program Files\Common Files directory where it takes up to 57 344 bytes of space. Although, experts report that this malicious program can also infect Mac computers.

Keep in mind that Upd.exe is an executable file, yet it doesn't open a visible window once executed. Thus, regular computer users can only detect it running in the Task Manager. The biggest concern about Upd is that it might perform the following malicious activities:

If you fail to detect Upd.exe virus in time, this program might be used to gather private information. In other terms, Upd.exe Trojan can record your credentials or online banking details and upload them to a remote server which is controlled by cybercriminals. 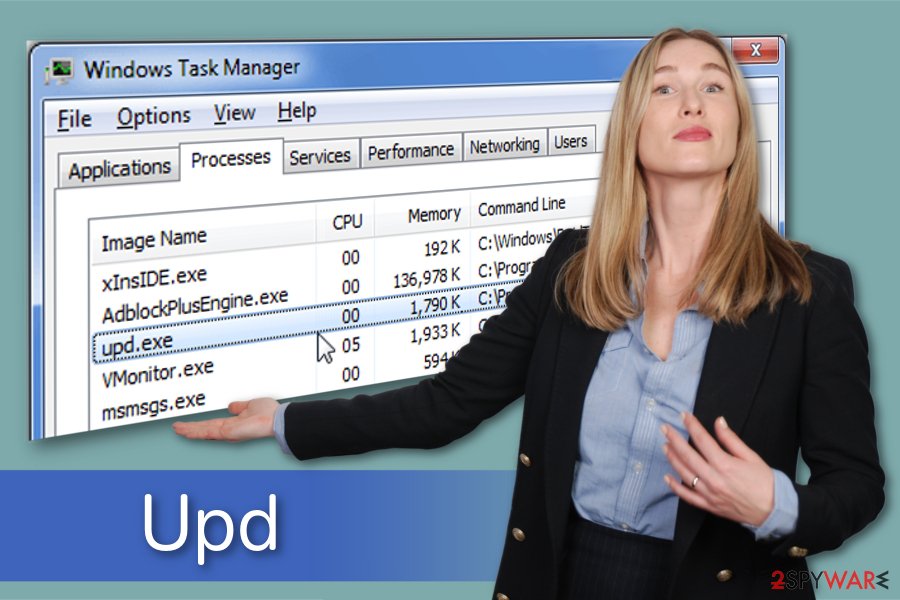 Upd is a virus which is capable of recording keystrokes, taking screenshots and sending the collected information to remote hackers.

Therefore, users are advised to stay cautious and remove Upd.exe immediately. Since Trojan horses are capable of hiding their malicious components across the system, people should employ reliable antivirus tools for the elimination procedure. We suggest using Reimage Reimage Cleaner Intego.

Be aware that it is essential to keep an eye on your bank account after Upd.exe removal. In case the malware managed to gather your credentials and passwords, they might be exploited in the future. Thus, report all unauthorized transactions to avoid financial losses and reset passwords right away.

Trojan horses can be distributed on peer-to-peer (P2P) networks

Commonly, people are highly eager to obtain legitimate software for free. Likewise, they search for software cracks or free updates on less than reliable sites or P2P[2] file-sharing pages. Unfortunately, this is one of the most common attack vectors how criminals manage to infiltrate malicious programs on the targeted systems.

Usually, they create legitimate-looking files which disguise Trojan horses and deceive inexperienced computer users. Therefore, it is vital to download applications only from verified websites. Additionally, be aware of malicious spam email attachments which can also hide the malware inside.

Unfortunately, regular computer users are not experienced enough to remove Upd.exe on their own. Merely terminating the process in the Task Manager won't help you to get rid of the infection permanently. In fact, it would just stop Trojan's activity for a short period of time.

For permanent Upd.exe removal, you must disable the infection in the first place. For that, we suggest using instructions which are appended below. Once Upd.exe virus is inactive, you will be able to download and install a professional malware removal tool.

Researchers[3] note that it is vital to pick a reliable and robust antivirus. Thus, we highly recommend using Reimage Reimage Cleaner Intego, SpyHunter 5Combo Cleaner, or Malwarebytes. You should let it scan your system files thoroughly and perform automatic elimination for you.

Explaining how to boot the system into Safe Mode with Networking:

Alternative way how to reboot the computer into Safe Mode with Command Prompt:

Finally, you should always think about the protection of crypto-ransomwares. In order to protect your computer from Upd and other ransomwares, use a reputable anti-spyware, such as Reimage Reimage Cleaner Intego, SpyHunter 5Combo Cleaner or Malwarebytes

Your opinion regarding Upd Cancel reply

You can quickly scan the QR code with your mobile device and have Upd manual removal instructions right in your pocket.