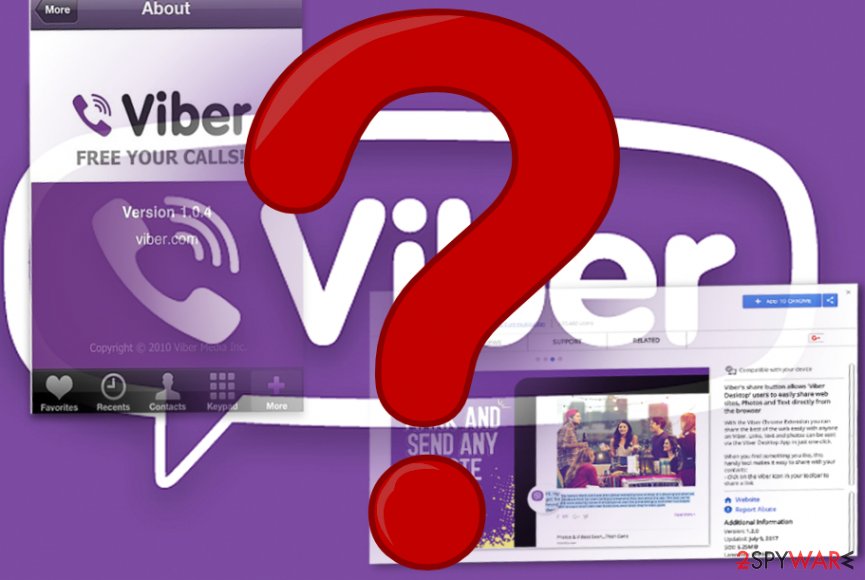 Viber is a legitimate messaging app created by Rakuten Inc.

“Viber virus” is a message which might suggest that your computer is infected with malware. Recently, Windows Defender and several third-party antivirus tools have flagged the well-known instant messaging app as a virus again. The tool is easily accessible online and functions on Android, iOS, Windows and Mac OS systems. According to the official website, the application now helps to communicate over 800 million users[1]. Though the software is devised by a Japanese[2] company Rakuten Inc[3], it quickly expanded its network in other countries by obtaining acquisitions and joint ventures.

Similarly to other communications applications, Viber offers free messages and video calls among fellow app users. You can also call to other countries for a low rate. This utility might seem highly functional and useful, however, recent reports about Viber being labeled as malware on Android devices and on standalone computers alert users.[4] What is more, it seems that the tool has been compromised before as well. Should you remove Viber? Find answers here.

If you have been a loyal user of this messaging application, similar reports might simply seem fake. The company has been steadily expanding its network. In 2010, Rakuten bought Linkshare, New York-based utility.

The following year, it launched its utilities designed for Indonesia and Brazil. In 2012, it increased its investments in Pinterest. Viber is also reported to be the official communication platform of FC Barcelona. Additionally, the app is compatible with Android, iOs, Mac and Window operating systems. Thus, what did go wrong?

On May 2017, Windows users, who have been using Viber on their PCs, might have got astonished by Windows Defender security alerts. The application was labeled as “Viber malware” and a potential security threat. Some of the third party anti-virus utilities recognized the app as a threat as well.

Interestingly, the app has been already labeled as malware before. Last year users have reported such behavior as well.[5] However, at that time, it turned out to be a false positive. Users have declared app data on their Android phones which solved the issue. Windows users offered reinstallation often software to fix the problem.

At the moment, the recent reports about Viber virus are still under investigation. It would be a great astonishment if the reports turned out to be true. On the other hand, the cases when well-known utilities get compromised are not rare. The cases of Skype and WhatsApp application perfectly illustrate such tendency.

Additionally, the privacy policy of the program contains statements which might trigger concerns for more cautious users. According to it, Viber collects the following types of information:

As common for instant messaging application, it acquires a vivid sort of personal data if you connect through Facebook, play Viber games, etc. However, the biggest issue is the privacy issue:

We only share your personal information with third-parties outside of Viber, for the purposes listed above, in the following circumstances(…)

Thus, it purely depends on you whether you are fine with such use of personal details. Otherwise, you might want to perform Viber removal. One of the options to eliminate it is to use Reimage Reimage Cleaner Intego or Malwarebytes services.

Also, you can remove Viber from your operating system and web browsers such as Google Chrome, Mozilla Firefox, Internet Explorer, Microsoft Edge, and Safari by using our step-by-step guide that is provided at the end of the article. Note that if you want to get rid of the application permanently, you need to uninstall its extension from browser apps.

“Viber malware” types from A to Z 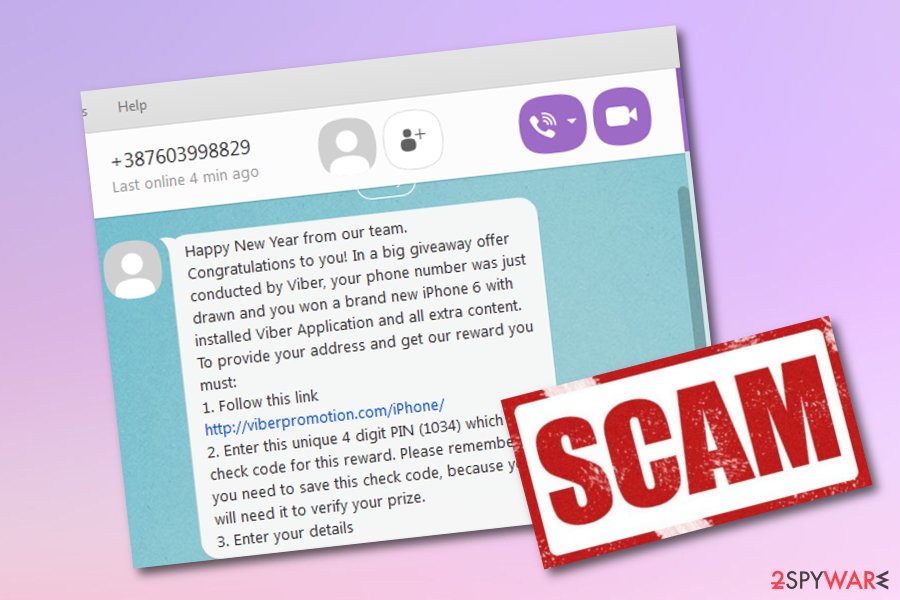 There have been reports about a dangerous botnet malware distributing via false Viber notification.[6] The crooks provide victims with a message of a falsely missed phone call from Viber support. The scam announces that the user has a missed call and injects a suspicious hyperlink into the text. If it is clicked, the victim is taken to a malicious web server.

Talking about Asprox botnet itself, this type of malware was created to deliver huge amounts of spam messages. However, it is also known that the botnet can steal credit card and banking information, push ads for pay-per-click revenue, and search for particular flaws in web pages. The hackers always ensure that the victim is running the IE browser and verify the IP before launching an attempt.

This type of scam targets Viber and WhatsApp users by claiming false things in text messages. Victims of this scam are tricked that they have won a particular prize, for example, the newest iPhone and asks the user to enter a digital code of four numbers. If he/she opts for entering the numbers, hackers might start urging for a particular weekly price that needs to be paid in order to receive the fake prize.

Symantec researchers discovered that the Beaver Gang Counter app has been distributed malware and using it to steal photos and videos from the well-known Viber application.[7] The infectious application can be found on the Google Play Store and aims to search Viber accounts for particular files and transfer them via remote servers. Such cyber threat has been detected by the name of Android.Vibleaker. 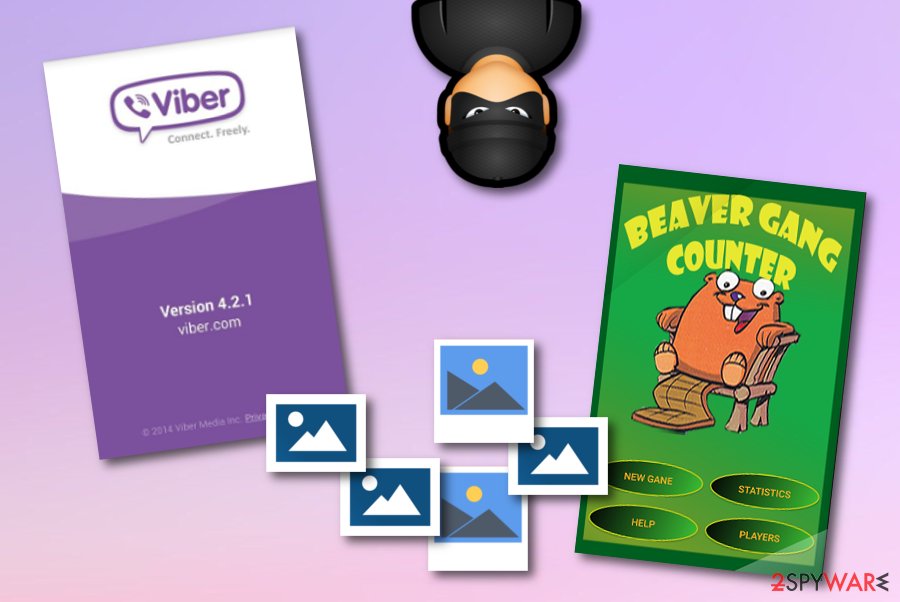 Security experts found out that some type of Android malware has been stealing sensitive data from popular messaging applications, including Viber.[8] Researchers claim that this type of virus compromises the “/system/etc/install-recovery.sh” file to execute every time when the victim opens Viber. An interesting thing about this malware is that it includes a particular module that helps to avoid detection and sneak into the device unknowingly.

Viber support has provided some guidance for their users who might have been dealing with various scamming/hacking attacks.[9] The company displays some instructions on how to avoid possible infections and scams. The staff claims notifications from Viber come only from their official website and are not urged to be forwarded to other users:

Due to its increasing popularity, there is a low possibility that you might encounter this app in the form of an optional add-on. Likewise, “Viber hijack” does not exist either. The application is available on its official website. In addition, you can also find Viber as a browser-add-on offered in Chrome web store.

Even though the distribution network does not raise concerns, do not exclude the possibility that crooks might exploit the software for their malicious purposes. If you are about to install Viber, download it from its official website. Once User Account Control notification pops up inquiring you about enabling the app, check whether Rakuten Inc is indicated as an official publisher. Do not download the app which presents “unknown” publisher.

In order to complete Viber removal, you will need to get rid of its cookies and third-party tracking web elements. Full browser reset is a faster solution. Anti-spyware applications come in handy in this situation as well.

If you have the software on Android, you will get rid of it by disabling it and uninstalling updates.

Once these steps are finished, Viber should be removed from your Microsoft Edge browser.

Get rid of Viber from Google Chrome

After you uninstall Viber software, make sure you get rid of its extension as well.

You can quickly scan the QR code with your mobile device and have Viber virus manual removal instructions right in your pocket.