WhatsappTime is an application that lets users chat via their Desktops, also collects and shares user information 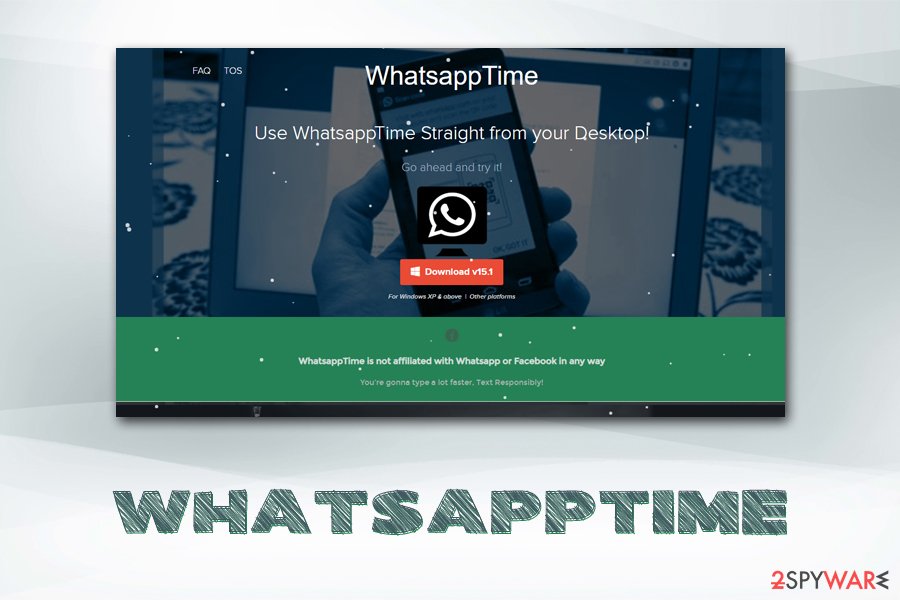 WhatsappTime is an application developed by a developer SoftNinjas and allows users to use WhatsApp on Windows desktop computers (the application is generally designed for Android and iOS devices). There are several other similar programs developed with similar functionality, although they are designed for Instagram, Facebook Messenger, and others. Nevertheless, WhatsappTime authors are not affiliated with these massively popular social network services.

WhatsappTime is distributed via third-party websites like Softonic, Softpedia, and similar ones, although users might also download it via the official site or find it on their systems unexpectedly after the installation of other freeware (due to software bundling).[1] While might find WhatsappTime functionality useful, they should also be aware that if this program entered without notification, there might be potentially unwanted programs present on the machine. Additionally, the application gathers a variety of information which might be shared with third parties for marketing purposes.

While WhatsappTime does not hijack Google Chrome, Safari, Mozilla Firefox, Internet Explorer, etc. and does not disturb web browsing sessions with intrusive pop-up ads, there are several indicators which do not meat the requirements of what a safe application should be, and it is advised users do not delay WhatsappTime removal.

First of all, WhatsappTime does not use a valid SSL certificate[2] on the official website, meaning that it is very vulnerable to cyberattacks. For example, malicious actors could intercept the website and insert a malicious installer and name it the same way (WhatsappTime.15.2.1dp3.exe). However, once this would be executed, users might find their machines infected with a rootkit,[3] worm, trojan, ransomware, or other dangerous malware.

Besides, the information that is put into a site that is not SSL protected might be stolen and used for malicious purposes, such as fraud. This is one of the reasons why you should never install WhatsappTime in the first place. 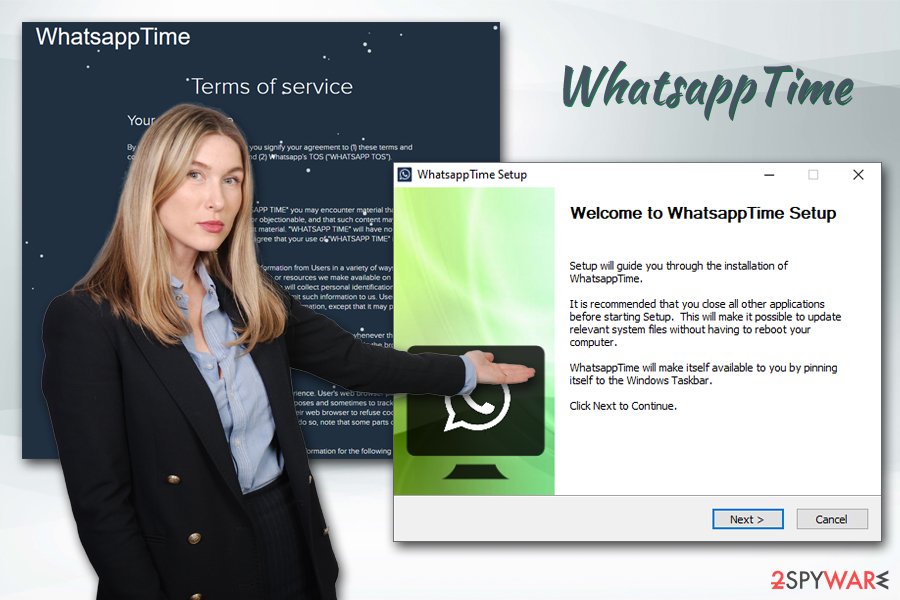 WhatsAppTime is an app that is distributed via an official website, as well as third-parties

Secondly, the installer of WhatsappTime is not verified, and publisher status during the installation is “unknown.” This is another threat to the system, as there are verification or standards that the installer is based on. In other words, you might install something you did not intend in the first place.

We may share or sell information with third parties for marketing or other purposes. – To run a promotion, contest, survey or other Site feature To send Users information they agreed to receive about topics we think will be of interest to them.

While for some, this is not a big deal, others might find this quite intrusive behavior, which will make them remove WhatsappTime altogether.

Ways the program is distributed

WhatsappTime has its own website, but mainly it spreads through a software distribution method called bundling. It means that this program is spread together with freeware and shareware. Unfortunately, there is no specific list of programs that could bundle the app, so we recommend you to be cautious whenever you download free programs on your PC. Make sure you install them without rushing.

To install the software correctly and avoid unwanted apps alongside your preferred one, make sure you configure the software's installation settings. Set them to Advanced or Custom, and then deselect all offers to download and install optional freeware alongside the primary software.

If you have already installed WhatsappTime on your system, and now you want to remove it, please follow WhatsappTime removal instructions that are provided on the following page. 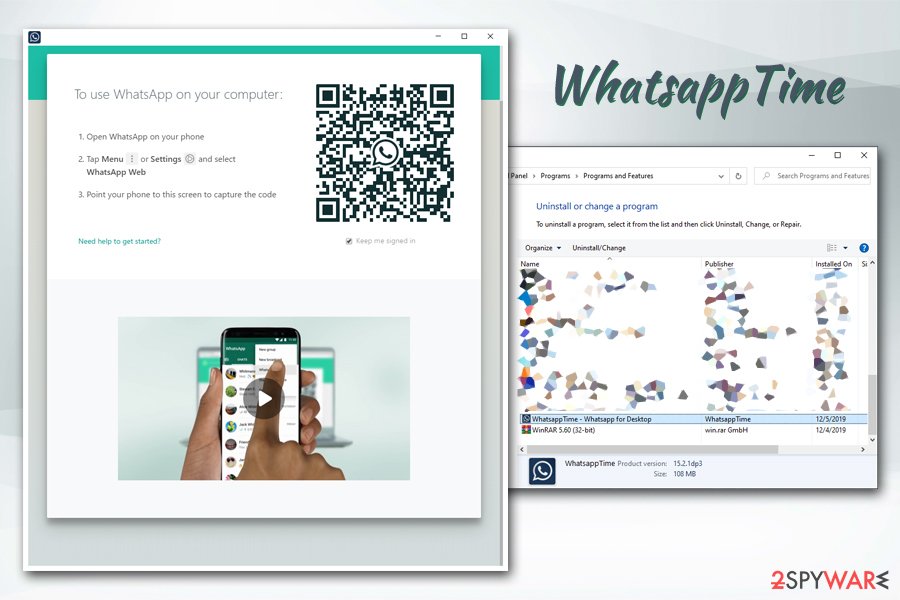 Despite being useful due to its functionality, WhatsAppTime does not use adequate protection to avoid attacks from outside sources

As a general rule, WhatsappTime removal should not be that of a complicated procedure. All users have to do is access the Control Panel and view the installed program list. However, if there are other potentially unwanted programs present on the computer, or you installed a malicious version of WhatsappTime virus, its termination might be a little tricky.

First of all, remove WhatsappTime manually as per our instructions below. You should then check for other apps you do not recognize, and delete them as well. However, if malware is involved, it obviously not going to be visible via Programs & Features section.

Therefore, you should scan your machine with anti-malware software, as it can detect all the malicious components and terminate them as required. Note, make sure that your security tool is up to date before performing a scan. Finally, as a final removal step, you should also reset the installed browsers in case potentially unwanted programs hijacked them.

Get rid of WhatsappTime from Internet Explorer (IE)

Once these steps are finished, WhatsappTime should be removed from your Microsoft Edge browser.

Reset Mozilla Firefox after you eliminate all the potentially unwanted apps:

Your opinion regarding WhatsappTime Cancel reply

You can quickly scan the QR code with your mobile device and have WhatsappTime manual removal instructions right in your pocket.