Zzzzz ransomware – yet another Locky version

Despite the amusing title, Zzzzz virus is no joke at all. It signals that your computer has been infected with the version of notorious Locky virus. Those, who might not have heard about this notorious ransomware, take a look at this article [1]. The malware has gained such title for its feature to encode all your personal files and append .zzzzz extension. However, dealing with this does not leave any positive experiences for its victims. Even if you happen to be on the list of targeted users, there is no need to panic. The first thing you should do is remove Zzzzz completely from the device. In that case, do not waste time and entrust the process to a reliable security tool, such as Reimage Reimage Cleaner Intego. After then, focus on data recovery options.

After Locky had dashed through the Internet with an immense force a couple of months ago, some virus researchers voiced their hopes that the cyber terror was finally over. However, little did they know what Locky developers had up their sleeves. The ransomware has been revived again. As a result, we have seen major new updates: ODIN, Thor, .shit file extension, and .aesir virus hit the Internet. What is more, the hackers even decided to aim higher as they infiltrated Facebook and spread the malware there [2]. The ransomware payload was hidden in a .svg file. Though it is unknown which version has been distributed, there are speculations that millions of the virus versions were dispersed. As the week hasn’t passed since the previous version, .aesir file virus appeared, Zzzzz malware made its appearance. Its operation way has not altered as it encodes the data with RSA-2048 and AES-256 algorithms. The main advantage of this method is that it utilizes the combination of mathematically interrelated public and private key [3]. Consequently, the process of decrypting the files without the private key remains a tiresome task. 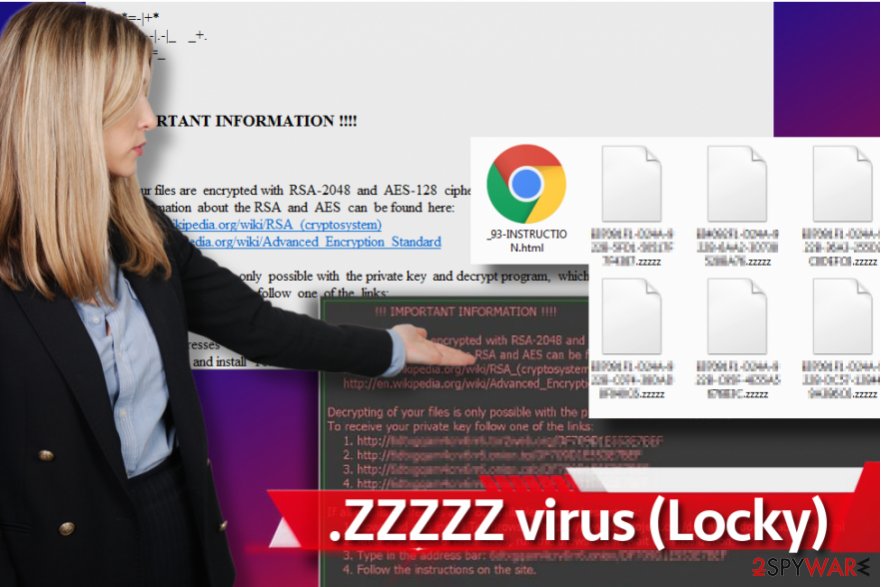 Although Locky ransomware creators were the first ones to use .Zzzzz file extension, it seems that they have inspired developers of Dharma ransomware to create a similar virus that uses the same extension. However, it must be said that Dharma Zzzzz ransomware acts differently and for some, its developers released not so many versions of it. The most significant difference between Locky's Zzzzz virus and Dharma's variant is that the latter one appends an email address to the encrypted file name, for example, .[amagnus@india.com].zzzzz. This email was spotted in .wallet file extension versions of Dharma, which appeared before these Zzzzz ransomware variants. However, although Locky and Dharma used to append similar extensions to encrypted files, these viruses are entirely different. No one managed to defeat not a single version of Locky, whereas Dharma ransomware project seems to be falling apart step by step. Someone (probably from the ransomware development team) has released a bunch of decryption keys; however, they appear to be working with certain variants of Dharma only. Nonetheless, we suggest trying this decryption tool by Kaspersky to restore your files if you find .[email].zzzzz file extensions on them.

How does ransomware find a way to infect a computer?

It is not difficult for ransomware threats to occupy the devices of those users who carelessly review their spam folders. Recently, some versions of Zzzzz hijack were detected in fake Amazon emails. The crooks disguise the malware in the email which is supposedly sent from this respective company asking to review the content of the attached file. What is more, the racketeers even dared to exploit the image of the Office of Personnel Management (OPM) to convince users into opening the files [4]. Luckily, in both cases, it is not difficult to suspect the fraud as the counterfeited emails contain several grammar mistakes, type and style errors. Locky still remains to be one of the most destructive ransomware threats. Its authors publish a new version every week. Therefore, beware of the latest edition – Osiris ransomware. All in all, having un-updated malware removal utility is a must as well [5].

When it comes to any file-encrypting malware, we recommend opting for an automatic solution. A security program, e.g. Reimage Reimage Cleaner Intego or Malwarebytes, ensures that no files are left behind after the elimination procedure. Keep in mind that the programs need to be updated daily in order for them to function properly. If you cannot proceed with Zzzzz removal due to some system malfunctioning, go through the guidelines of file recovery. After that, pay attention to the below-given guide to recover the files. Bear in mind that data recovery should be performed only when you remove Zzzzz virus completely.

Guide which is presented above is supposed to help you remove Zzzzz from your computer. To recover your encrypted files, we recommend using a detailed guide prepared by 2-spyware.com security experts.

If your files are encrypted by Zzzzz, you can use several methods to restore them:

Install the utility to recover some of your files. Though initially it was designed for locating the damaged files after a system crash, the creators updated the program to aid users to confront ransomware.

If you have enabled System Restore function, you should be able to find the previously stored copy of each file.

The program restores files according to the shadow volume copies created by Windows OS. ShadowExplorer then accesses these patterns and recreates your valuable files. However, some versions of Locky are known for deleting these copies. Make a rush and give this app a try.

Sadly, no one managed to defeat Locky virus yet, therefore, a free Locky Decryption tool is not available at the moment.

Finally, you should always think about the protection of crypto-ransomwares. In order to protect your computer from Zzzzz and other ransomwares, use a reputable anti-spyware, such as Reimage Reimage Cleaner Intego, SpyHunter 5Combo Cleaner or Malwarebytes

You can quickly scan the QR code with your mobile device and have Zzzzz ransomware virus manual removal instructions right in your pocket.