The recent discovery of the new Angela Merkel virus again proves that the social and cultural environments have impact and reflect even in malicious hacker creations. It is not the first time we hear about famous politician names being used to deliver ransomware. Just recently we have talked about Donald Trump ransomware which, luckily, wasn’t as successful as the President-elect Donald Trump in his presidential campaign. Angela Merkel ransomware has just appeared on the web, so the experts are not yet sure what this virus is capable off and what to expect from it. Nevertheless, some things can already be pieced together. For instance, after some investigation, the experts have found that the code of this particular virus is very similar to the one used by the Exotic ransomware which can suggest that either these viruses were created by the same hackers or that the code was simply replicated. It can also be expected that the hackers have used other components of the Exotic virus in the setup of Angela Merkel virus. If this is really the case, the files that this virus targets should be encrypted with AES and RSA algorithms and remain inaccessible until the ransomware victim buys the private data decryption key directly from the hackers. The crooks will try to persuade you that there is no other way to get your files back and if you reject their offer, you will never see your personals files again. Do not give in to this pressure — don’t send hackers any money. You cannot be certain if they will send you the decryption key and if this key will be effective in decrypting your files. Besides, by paying up, you only support hackers in creating more nasty cyber parasites. Thus, instead of trying to retrieve your files from the hackers, remove Angela Merkel ransomware and try out alternative data recovery techniques we present at the end of the article. 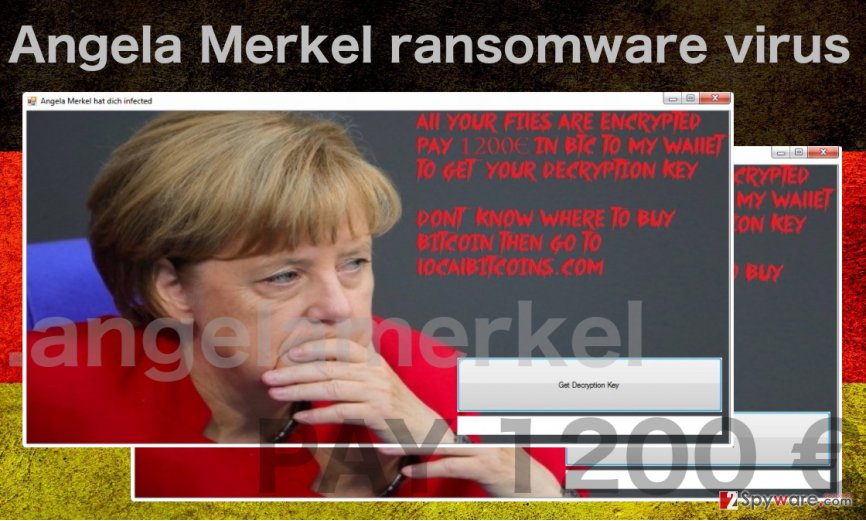 When infected with the virus, the computer starts operating a lot slower. After the whole encryption process is done, “Angela Merkel hat dich infected” pop-up with Angela Merkel’s picture shows up on the screen and orders the victim to pay 1200 Euros in Bitcoin to get the decryption key. The ransom note with further details can be found in every folder containing infected documents. Besides, every encrypted file will have the .angelamerkel extension added to them. Unfortunately, this extension, nor the encryption itself will be eliminated after Angela Merkel virus removal. Nevertheless, the virus seems to be still under development, so there is a great chance that its creators have left some cracks which might help bypass the encryption. Several strategies of alternative data recovery techniques are discussed at the end of the article. Before attempting any of these methods, though, make sure you scan your device with some professional antivirus software, for instance Reimage Reimage Cleaner Intego. Automatic antivirus tools will eliminate all the residue virus files and prevent the virus from bouncing back to your PC.

How can this virus breach into your computer?

There are several techniques that malware creators use to spread their malicious creations across the web. In the case of Angela Merkel infection, it can enter your computer: a) via a malicious email attachment, b) with the help of exploit kits, c) disguised as a software update. Despite the different possibilities, hackers favor the first infiltration method the most. That’s probably because it is the least effort-requiring technique of them all. The hackers simply have to come up with a convincing message and add the infected file at the end for the victim to download. Such notification are usually very convincing, so it might be difficult to differentiate potentially dangerous from the legitimate ones. Thus, keep your personal information safe from Angela Merkel and any other virus out there, by creating backup copies of your files.

Don’t believe any word that Angela Merkel virus says. It only tries to trick you into believing that you have no other choice but to pay the criminals, when in reality, it is not true. You have options, and one of them is Angela Merkel ransomware removal. Restart your device in Safe Mode with Networking and carefully follow the steps presented in the virus decontamination below. Then, install or run the already existing anti-malware utility to remove Angela Merkel ransomware from your computer entirely.

Guide which is presented above is supposed to help you remove Angela Merkel from your computer. To recover your encrypted files, we recommend using a detailed guide prepared by 2-spyware.com security experts.

If your files are encrypted by Angela Merkel, you can use several methods to restore them:

What are the advantages of recovering data using Data Recovery Pro

One of the main advantages of this technique is that this method is fast and automatic. This means that using it requires minimal effort as well as technical skill. This is especially useful for the less technically advanced users. Nevertheless, this method is powerful and can help recover some of the encrypted data.

How can you use Windows Previous Versions feature for the data recovery?

Instructions on how to use Windows Previous Versions feature are presented below, but before you get to that, please try to remember whether you had the System Restore function enabled before the virus attack. If not, you can skip to some other data recovery method, because this one will be of no use to you.

Do you have chances of recovering your data using ShadowExplorer?

If the virus has not eliminated any of the Volume Shadow Copies, the chances of data recovery using ShadowExplorer are valid. Give this method a try by following the guidelines below.

Finally, you should always think about the protection of crypto-ransomwares. In order to protect your computer from Angela Merkel and other ransomwares, use a reputable anti-spyware, such as Reimage Reimage Cleaner Intego, SpyHunter 5Combo Cleaner or Malwarebytes

You can quickly scan the QR code with your mobile device and have Angela Merkel ransomware virus manual removal instructions right in your pocket.