AnyProtect – a fake system scanner that seeks to earn monetary benefits from promoting its licensed version for $59.99 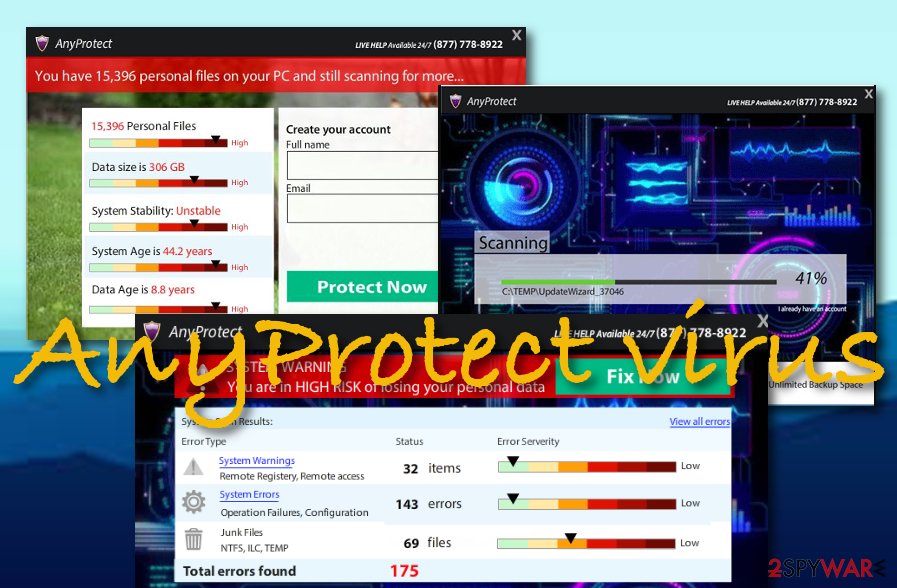 AnyProtect (also known as AnyProtect Online Backup) is a very doubtful application that has raised many questions and uncertainties. This program offers such a feature as an opportunity to store and backup your data in an online storing place. Although that sounds like a great feature, you should think twice before installing this program on your computer. That is because it may start interrupting you while you are browsing on the web by showing you various pop-up ads, in-text links, and similar content. AnyProtect scanner is likely to provide you with fake scan results that claim about possible data loss in order to threaten you and convince you to purchase the licensed version that costs $59.99.

AnyProtect, developed by CMI Limited and run by IronSource, brings the AnyProtect.exe process to the Windows computer system that takes up to 19.95 MB and is run in the Windows Task Manager. According to research, this fake system tool is most commonly found on Windows computers and targets users worldwide who live in countries such as the United States, Brazil, and Turkey.

Once AnyProtect end ups on the computer system, it includes a startup registration key in the machine and allows the program to launch every time when the computer is booted. Besides, a dubious process is also added to the Windows Task Scheduler that allows the app to perform self-activation in certain time periods. Some other related files can be found in directories such as C:\Program Files\ or C:\ProgramData.

Afterward, AnyProtect starts initiating full system scans that provide misleading information about your computer's security state. The app is likely to claim that numerous files need to be backed up, otherwise, they might experience permanent loss. However, this trick is performed only to encourage the users to purchase the licensed version of the program. 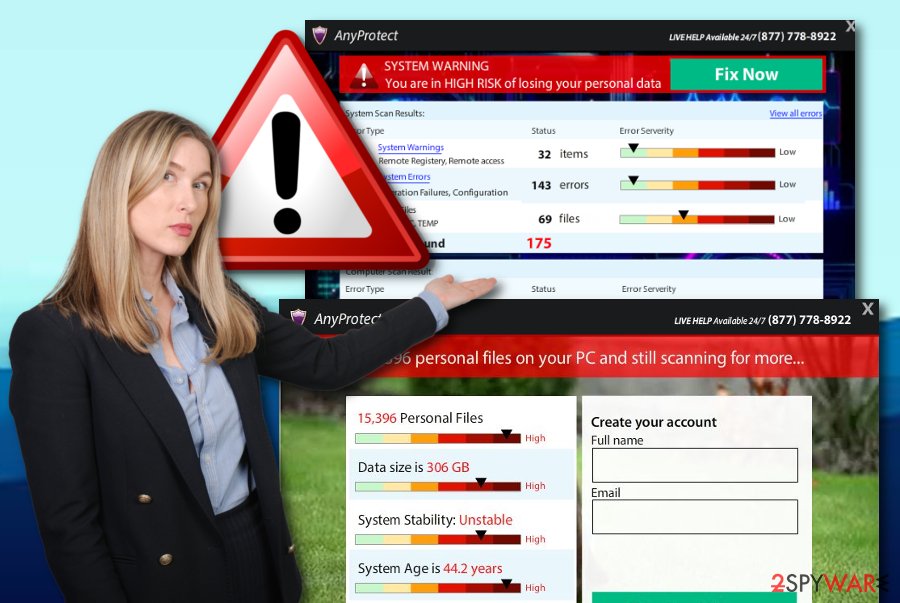 A user has reported to a Microsoft forum that AnyProtect and other apps such as GameDesktop and Wajaro keep reinstalling themselves after the removal process.[1] It appears that the system tool is not only hard to get rid of for good but also might be likely to come with other PUPs to the system unknowingly.

AnyProtect virus is the name given to this fake system tool due to the questionable reputation it has earned between users. There are many discussion forums[2] where the programs intrusive activity and unknown appearance have been talked about. Keep in mind that the main goal of this application is to gain monetary benefits from you.

Besides all the misleading scan results, AnyProtect can start delivering intrusive pop-up notifications, banner ads, and in-text ads that might be filled with offers to download rogue security software and other unreliable products. Nothing that comes from this potentially unwanted program can be trusted or taken seriously.

Another feature that might be included in the operation module of AnyProtect is redirecting to affiliate sources to deliver you other promoted apps. However, the worst part about these redirecting sessions is that you can accidentally land on a malware-laden location and get your system infected with a notorious virus.

AnyProtect is a fake scanner that aims to promote its licensed version for $59.99

Regarding all the unwanted activities and misleading scan results that the system tool is responsible for, you should perform  AnyProtect removal as soon as you spot the rogue software running on your computer. In case you also spotted some system compromisation, try fixing the corrupted areas with the help of a program such as Reimage Reimage Cleaner Intego.

There are two ways in which you can remove AnyProtect from your Windows or macOS computer system. You can complete the process manually by opting for the step-by-step guidelines that have been added to the end of this article or you can download and install reliable automatical software that will complete the entire process for you.

Do not be surprised if some rogue system tool or another potentially unwanted program appears on your computer system right after you install an unfamiliar freeware package. The most popular technique of distributing such apps is known as “software bundling”[3] and has been widely promoted by third-party developers.

Suspicious products from freeware bundles appear on computer systems of those who have selected the “Recommended” settings as the main downloading/installing mode of your software. If you do not opt for the “Custom” mode instead and uncheck the boxes next to every PUP, you are likely to end up with a useless and annoying program.

Furthermore, products such as fake system tools, adware, and others come from third-party downloading sources such as cnet.com, softonic.com, and download.com. Regarding this fact, you should get all of your programs and services only from their official websites and original developers, otherwise, you are taking risks of ending up with some type of PUP.

Also, you can receive a particular potentially unwanted program through a rogue third-party ad, hyperlink, or a fake flash player update offer. These types of components are placed all over the Internet and can be met on any type of third-party source. According to Virusai.lt cybersecurity specialists,[4] you should avoid clicking on suspicious locations on the web that look concerning to you.

Get rid of AnyProtect scanner from your computer

This dubious program may drop a couple of registry entries in order to launch itself every time when you start your computer. Therefore, sometimes it is difficult to remove AnyProtect manually as you might not be able to discover all suspicious components and if you do not delete all the products that are related to the system tool, the program can easily start running again after you boot your computer system the next time.

However, we highly recommend removing this program from your computer as soon as possible and there are some reliable tools that will help you to deal with AnyProtect removal properly. You should select a reliable program, download and install it to your computer system, perform a full system scan, and launch the fix process.

In other cases, if you are interested in uninstalling AnyProtect virus on your own, there also is such a possibility. However, make sure that you include the proper skills that are needed to eliminate such PUPs. Afterward, look down below where you will find guiding steps on how to clean both Windows and Mac operating systems.

To get rid of potentially unwanted applications from your Windows operating system and terminate all the additional products that were brought by the system tool, use these instructing steps:

To remove AnyProtect from Windows 10/8  machines, please follow these steps:

To eliminate the questionable system tool and clean your macOS machine from unknown content, complete the following guidelines:

If your macOS is displaying some infection symptoms, proceed with the following guide:

Your opinion regarding AnyProtect Cancel reply

You can quickly scan the QR code with your mobile device and have AnyProtect manual removal instructions right in your pocket.