Codecfix — malware that is usually downloaded from P2P websites 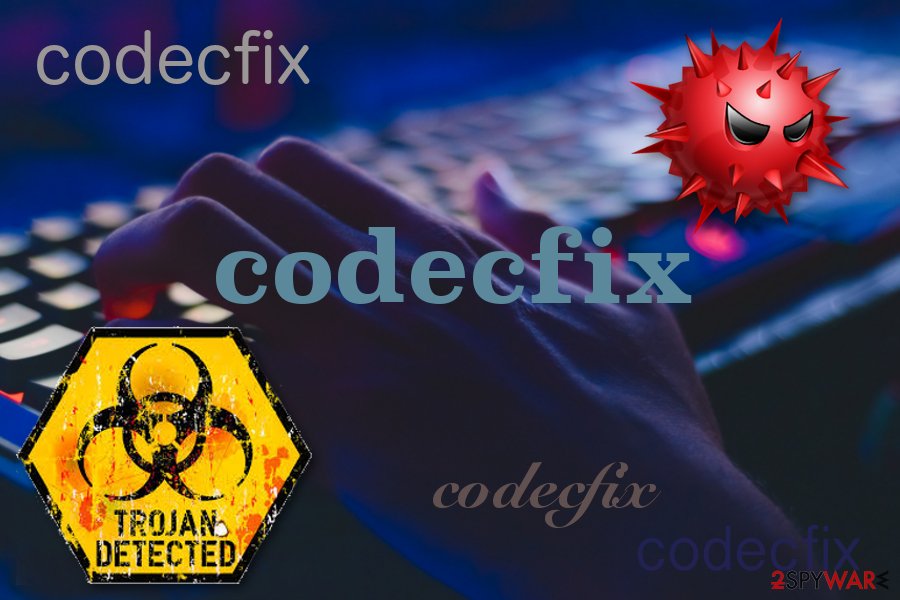 Codecfix is a dangerous executable that initiates virus downloads and originates from torrent sites like Pirate Bay.[1] Once .wmv file is downloaded onto the machine, those who tried to open it received a message, informing users of an attempt to download and install Codecfix.exe file. Those who agree to the installation of the suspicious executable, inject malware payload into their computers. Users who employ reputable anti-malware tool can be protected from the intrusion. However, those who did not use comprehensive security software end up with a messed up systems – a multitude of unknown programs, including SafeFinder, are installed on the computer without users' consent. The infected netizens also said that they were unable to uninstall the additional applications, as such function was disabled. Without a doubt Codecfix is not something that should be trusted, so read this article to find ways to eliminate the threat.

Windows Media Video (WMV) is an old type of video file that needed several codec packs to play videos properly. Therefore, files were often included with the automatic prompt to the correct codec. Having this in mind, many users might be familiar with this process and think that Codecfix.exe is a legitimate codec, which is not the case.

Users reported that fraudulent files always use small compressed files that are disguised Game of Thrones or Deadpool videos, and always seeded by as many as 5,000 seeds. This malicious Codecfix file is uploaded by a few usernames that are newly registered.

Thus, even if you try to pirate software or video (which we highly discourage), do not fall for the trick of malicious actors. Do not agree to install Codecfix malware, and simply delete the file immediately. However, if you already installed the virus, you should eliminate it using anti-malware tools and the run ReimageIntego to repair your system.

When malicious Codecfix loads on the system it interacts with the primary disk partition and modifies system files, spawns processes and makes changes to Windows Registry, which ensures the persistence. Codecfix virus is a severe threat, but not many security tools can identify this file as malicious.[2]

Since trojan makes additional changes on the system of your device, it becomes more challenging to remove Codecfix malware. However, you should do that as soon as possible. Employ reputable anti-malware program and then scan the device thoroughly to remove trojans or other malware.

Opt for automatic Codecfix removal as many researchers[3] advise and scan the system entirely. You may need to enter the Safe Mode with Networking before using security software because malware often disables some of its components.

Also, remember that Codecfix virus can be designed to run background processes like cryptocurrency mining.[4] These cyber threats are often developed with the purpose of spreading other intruders like ransomware, which could completely wipe out your personal files or result in money loss. 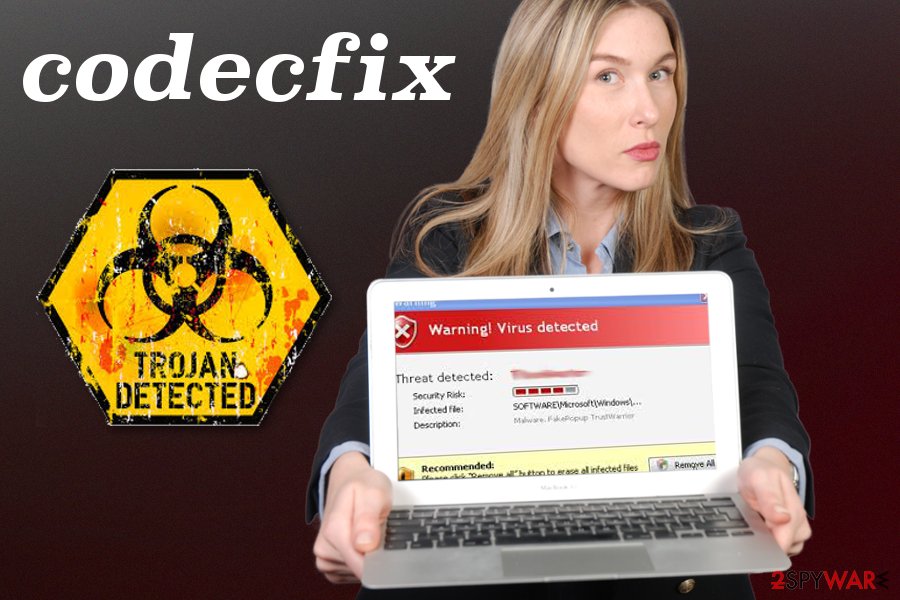 codecfix is a virus that can make changes on the system to keep the malicious process more persistent.

Trojan infections can be prevented

Malware infection is a serious virtual safety threat and should not be taken lightly. One of the most common malware distribution methods is Peer-to-Peer networks. A computer connected to this network becomes a separate server, as well as a client, as files can be shared easily. It goes without saying that such file-sharing practice is extremely unsafe, and downloaded files can be something completely different than expected (e.g., malware).

Because P2P offers anonymity, it became a nest for bad actors who are willing to profit or simply damage other users' computers as a prank. Therefore, using such networks is not wise, especially when it comes to cybersecurity. However, many users still choose to do so. If you are one of them, make sure you download legal content only and scan the downloaded files with anti-malware software before opening them.

Additionally, files that were initially not infected can be modified by hackers and injected with malicious payload without authors knowing about it. Therefore, choose legitimate sources online – there are plenty of free but legit video streaming services available online.

Proper Codecfix removal cannot be performed without reputable anti-malware tools. Using software like ReimageIntego, SpyHunter 5Combo Cleaner or Malwarebytes can significantly improve the performance of your device and guarantee the virus elimination. A thorough system scan using one of these programs or anti-malware of your choice indicates threats and deletes them.

You should not try to remove Codecfix virus by yourself, as malicious software is complicated and only trained IT experts are capable of doing so. Simply enter Safe Mode with Networking as explained below, bring your security software up to date, perform a scan and get rid of all the malicious entries.

Reboot the machine in Safe Mode with Networking, to remove codecfix entirely from the system:

Follow the guide and try System Restore feature as the method of virus termination:

Finally, you should always think about the protection of crypto-ransomwares. In order to protect your computer from codecfix and other ransomwares, use a reputable anti-spyware, such as ReimageIntego, SpyHunter 5Combo Cleaner or Malwarebytes

Your opinion regarding codecfix Cancel reply

You can quickly scan the QR code with your mobile device and have codecfix manual removal instructions right in your pocket.