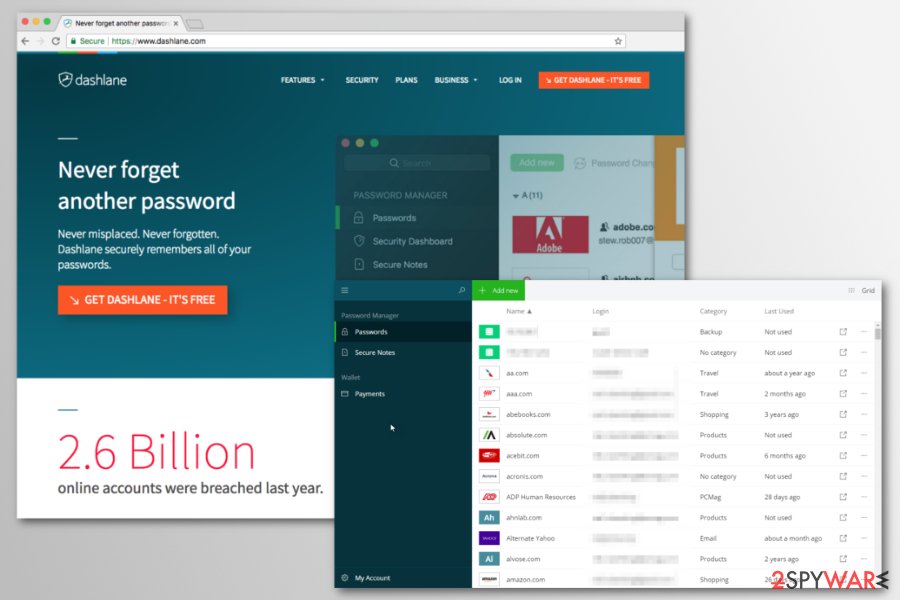 Dashlane is a password managing application[1] that is available for free but also offers two paid versions. The program is legitimate. However, users report about downsides of this tool, such as silent installation, annoying pop-ups, changed browser’s homepage or high CPU usage on Windows, Mac OS X, iOS, and Android devices.

Some antivirus programs identify this password manager as a virus. However, such Dashlane virus does not exist. This program is not malicious and cannot harm your PC. The problem is that security tools might warn about it due to released updates, added new features and improved functionality.

However, as we have mentioned in the beginning, Dashlane has some negative functionality that raises users’ suspicions. The program is reported to appear on the computer and hijack browser’s homepage. This might happen because the software might be spread bundled with free programs. It was also blotted software on ACER computers.

Though, such cases are not very common. Most of the time, users install it from the official website Dashlane.com. Additionally, Dashlane app can be downloaded from iTunes or Google Play Store. However, before installing it, it’s important to read user reviews. Some of them not only report about program’s functionality but high CPU usage as well:

Normally okay but loads of issues at the minute.
Using 99% CPU when trying to login, often doesn't popup, only working in standalone mode.
This is happening on my laptop and my desktop![2]

There’s no doubt that such high usage of device resources might lead to serious damage to it. Hence, such activities should not be tolerated. However, some reports also tell about annoying pop-ups delivers by Dashlane password manager too.

Dashlane ads might promote its paid versions – Premiums and Business. However, after the installation of the app, you might also notice an increased amount of advertisements on the web. Though the majority of problems might occur if users download the app from third-party sources, for instance, P2P networks, or inattentively install freeware.[3]

If you noticed that your computer or smartphone started acting oddly after the installation of password manager, you should scan the device with Reimage Reimage Cleaner Intego or another anti-malware. If you installed a malicious version of the app, you will be able to remove Dashlane within a few clicks.

However, if you are just not satisfied with app’s functionality, you can uninstall it as an ordinary program or browser extension. This program is absolutely legit, so you should not have any difficulties with uninstallation. If you need help with Dashlane removal, scroll down to the of the article. 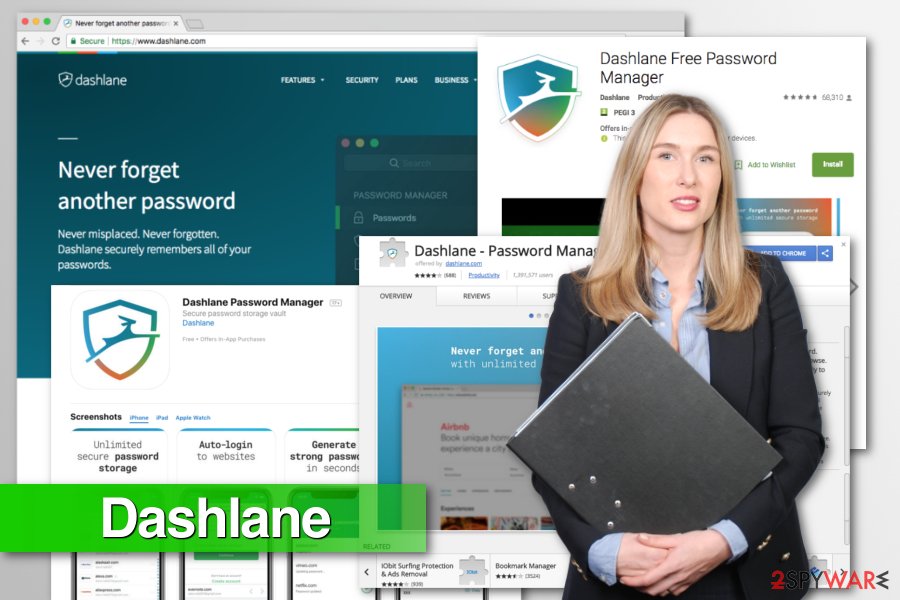 Dashlane is a legitimate password manager which can be downloaded from app stores.

The program has an official website and is available on Chrome Play store, iTunes, and Google Play Store. Additionally, you might find it on P2P networks or file-sharing sites or even software bundles. Though, you should not install software from these sources.

Keep in mind that both legit and insecure programs can enter the system if you use unknown download sites or use incorrect installation settings. For installation, always use official developers websites and use Advanced/Custom settings only.

Differently than Quick/Recommended setup, Advanced settings reveal what optional components were included in the software bundles. Keep in mind that many free programs spread together with additional downloads! However, a security team from Utanvirus.se[4] suggest opting out all of the third-party apps that are offered to download. Typically they are potentially unwanted programs.

Instructions on how to uninstall Dashlane

If you accidentally installed or you do not want to use this password manager anymore, you can remove Dashlane as an ordinary application:

However, if you downloaded this program in the software bundle or suspect that you may have obtained a corrupted version, you should opt for automatic Dashlane removal, meaning that you should scan the device with an updated anti-malware and make sure that your PC is not infected.

Get rid of Dashlane from Windows systems

If your PC was infected with Dashlane adware, follow these steps to get rid of it:

These steps will help you to uninstall Dashlane from Mac OS X:

Once these steps are finished, Dashlane should be removed from your Microsoft Edge browser.

Navigate to Chrome extensions and click Trash icon to delete the unwanted extension.

Get rid of Dashlane from Safari

Your opinion regarding Dashlane Cancel reply

You can quickly scan the QR code with your mobile device and have Dashlane manual removal instructions right in your pocket.