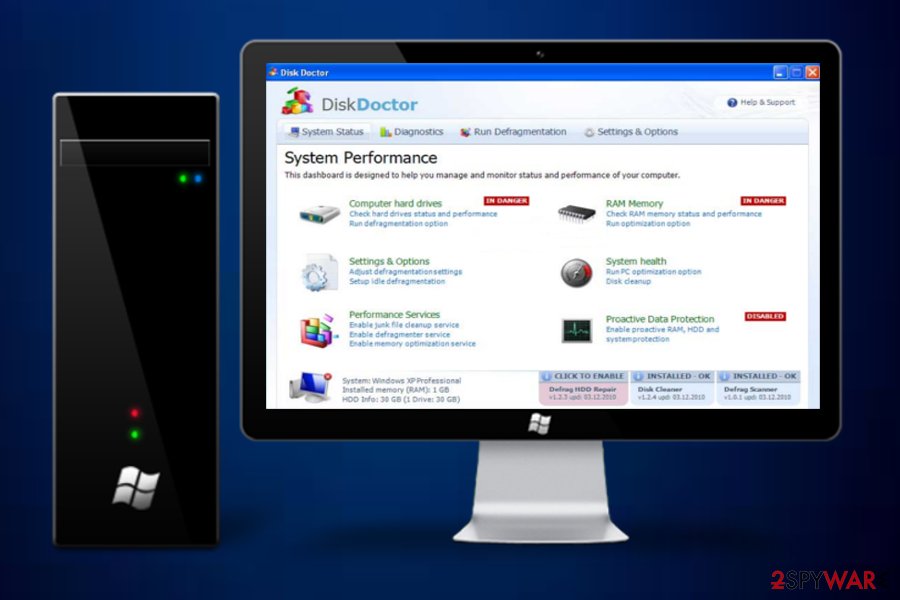 Disk Doctor is a rogue computer repair and analysis program forcing to believe that certain programs and the hard drive have been damaged. The system utility uses false scan results and fake error messages as a method to make you think that your computer has some serious problems. However, showing bogus virus-related alerts is not the only thing that Disk Doctor is capable of. The rogue app modifies the C:\Windows\System32\ location so that it shows changed or no content at all and makes users believe that there is some type of corruption.

Disk Doctor may block other programs and system utilities too. If you try to run a particular app, you will be provided with a message that some corruption with the program or the hard drive has happened. Nevertheless, in order to protect itself from legitimate anti-malware programs, suspicious software will attempt to block them. Besides, this way users will be encouraged to purchase the advanced version of Disk Doctor as it would be the only “security” app currently available.

While Disk Doctor virus is running it will be configured to start automatically when Windows starts. Once started, the program will perform a scan and then list a variety of hard drive disk errors, memory failures, and other problems. These errors, though, do not exist on your computer but will be provided as huge threats to your computer security.

When you are provided with bogus scan results by Disk Doctor, you will be encouraged to purchase the licensed version of the program for “fixing” all of the problems. This is the main trick why this rogue security software[1] is on your computer in the first place. Developers seek to gain income by providing users with false information.

While the program is running, Disk Doctor will also display numerous warnings and pop-ups from the Windows taskbar. These error warnings range from notification stating that your computer has critical registry errors to a warning stating that hard drive is missing. The text of some of the alerts you may see include:

The program will also constantly show you alerts asking you to register the program. As they are shown so frequently this can become quite an annoyance. What is more, Disk Doctor will block nearly all legitimate programs on your computer and display the following message:

Some examples of the fake problems it detects on your computer are:

With all of this said, if you are infected with Disk Doctor, please do not purchase this program as it has no true value and is a complete scam used for benefitting from gullible users. Instead of spending your money on such as useless do, better go search for reviews on reliable security software and get ultimate protection on your machine so that similar PUPs will not be able to sneak into your system unnoticed again. 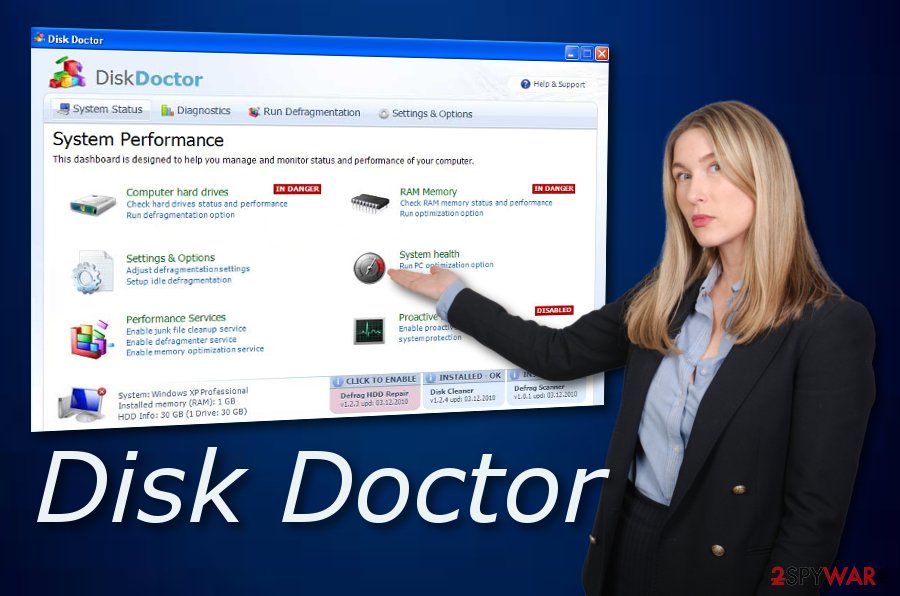 Additionally, you should perform Disk Doctor removal as there is no point in keeping the tool. All the program will do is take up your disk space, bombard you with fake alerts, and annoy you very fast. For the elimination process, we recommend downloading reliable antimalware software or using the step-by-step guidelines that have been added to the end of this article.

When you remove Disk Doctor from your machine, you should automatically check for possibly-corrupted entries, files, or other system components. If the rogue software has modified some of these locations, you can try using a system repair tool such as ReimageIntego that might help you to bring your system's position back to as it was before the PUP's approach.

Recently, some other software also named Disk Doctor showed up pointing out to be a system cleaning utility for macOS machines. This tool has been advertised and promoted on various third-party websites as a program useful for freeing disk space. However, it appears to be another fake system tool that does not fulfill its functionality. The same is claimed by user reviews.[2]

According to security specialists from NoVirus.uk,[3] rogue system tools sometimes have their own distribution webpages and sometimes they do not. However, these types of products are most likely to infiltrate the computer system via third-party downloading sources such as cnet.com, softonic.com, or download.com.

“Software bundling” is also a common technique used by third-party developers when they inject the PUP into an entire software package. People who have set their installation settings to “Quick” or “Recommended” ar the most vulnerable for bundling techniques. Regarding this fact, you should change the configuration to “Advanced” or “Custom where you will be able to take full control of your incoming downloads.

Sometimes, rogue security software can get installed through other PUPs such as adware, browser hijackers, or even through some type of malware such as Trojan viruses that provide remote control to the victim's computer system. For full system protection, you should always keep an active antivirus program that will alert if something odd is happening.

Additionally, rogue third-party products can be advertised via pop-ups that you meet on unsecured websites or come injected into suspicious hyperlinks. Our point is that you should avoid clicking on unknown directories that occur along the way while you are surfing the Internet sphere.

Disk Doctor might bring multiple additional components to your Windows computer and leave them in the Task Manager or Windows Registry. Keep in mind that these locations will also need cleaning for a full removal process.

There are two ways how you can remove Disk Doctor from your machine. You can do it either manually or automatically.  The first option requires more of the user's involvement and effort. It might take much more time for you to figure out all the PUP hiding places than it would take antimalware software that is considered the second option.

Disk Doctor removal by using antivirus programs can be much easier and more effective than on your own. All you have to do here is to download and install a reliable tool and wait for it to finish the fixing process. This way you will be sure that the rogue security software will not return within the next computer boot.

To remove the fake optimization software from your Windows computer system, apply the following guiding steps:

To eliminate bogus apps from your macOS machine, carry out these instructing guidelines:

After uninstalling this potentially unwanted program (PUP) and fixing each of your web browsers, we recommend you to scan your PC system with a reputable anti-spyware. This will help you to get rid of Disk Doctor registry traces and will also identify related parasites or possible malware infections on your computer. For that you can use our top-rated malware remover: ReimageIntego, SpyHunter 5Combo Cleaner or Malwarebytes.

You can quickly scan the QR code with your mobile device and have Disk Doctor manual removal instructions right in your pocket.