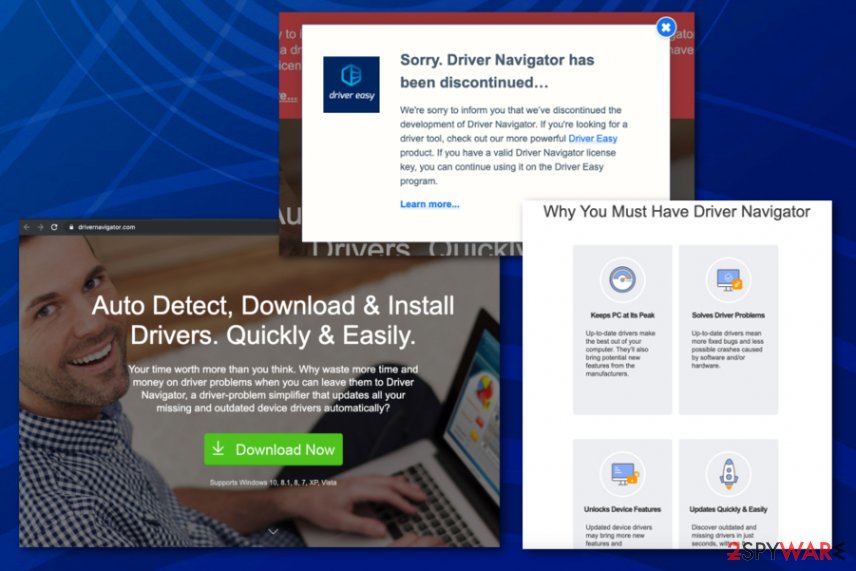 Driver Navigator PUP is nothing the developers have promised on the site or promotional ads. Driver Navigator is the rogue Windows tool that falls into a potentially unwanted program category and is used to perform misleading system scans. These alleged system checks show pre-determined results and trick them into purchasing the full version of this rogue driver optimizer. For a long time, this shady tool was one of the more annoying PUPs found on various free installers and promoted via deceptive sites and pop-ups. However, at the time of writing the update for this article the official promotional site stated about discontinuing. and pushed another driver tool – Driver Easy for just $29.95.

It has all the claims Driver Navigator virus previously had and supposedly is more than valuable for any Windows user. Un until 2017 users reported in various online forums that random pop-ups and shady installation were the main issues regarding the suspicious program. We can determine that neither of these tools can be worth your trust and especially money. There are many other tools that can claim about usefulness and value but deliver PUPs based on social engineering scams instead.[1]

Driver Navigator virus shows fake system alerts, claims to scan the machine and delivers altered results with a full list of issues because this content encourages users to contact the alleged technical support team or install the offered tool. In most cases, the scanning occurs out of nowhere but people still fall for the scam because the list contains names of outdates software or even crucial PC issues.

Driver Navigator by Easeware is an untrustworthy system tool that claims to be designed to detect problems in device drivers and fix them automatically. While this potentially unwanted program[2] cannot be called a virus, experts suggest keeping a distance from it. It is one of the system tools that are offered for helping people update their drivers. Unfortunately, you should still be careful with this application because it can trick you into spending your money on nothing.

The official site where Driver Navigator is distributed and promoted states that the tool is no longer developed, but developers there claim to offer another shady tool Driver Easy that is known for not good features.[3] This is yet another potentially unwanted program but with a different name.

If you know that this program appeared on your computer after downloading it from its official website, it's less dangerous because the tool itself is questionable, not the additional applications. However, there are hundreds of people who report about the unwanted appearance of the Driver Navigator virus on their computers.[4] This means that you cannot be sure that this PUP is the only app that landed on the machine.

In this case, you should know that drivernavigator.exe and similar files infiltrated your machine in a bundle with freeware. This is the main way used by the program's developers to spread the trial version on the Internet. 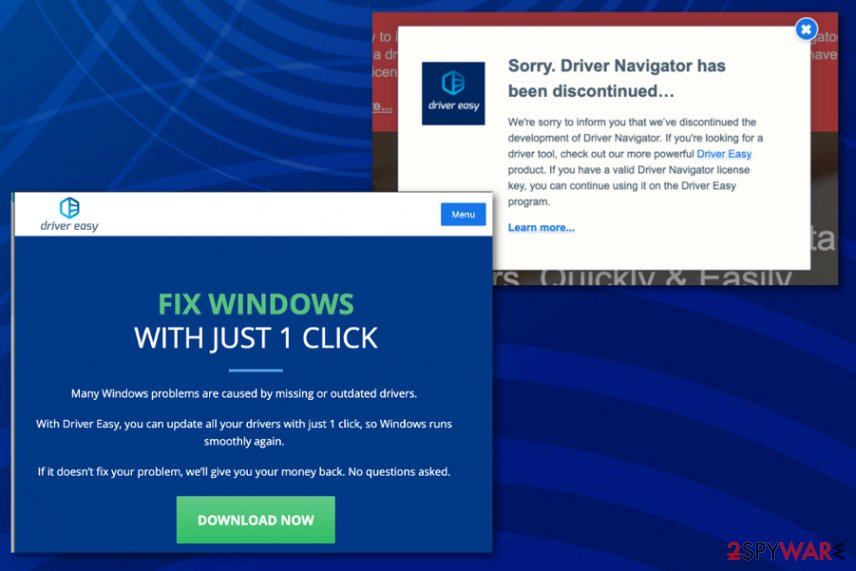 You don't have to remove Driver Navigator if you avoid its installation in the first place. For that, you just need to stay focused on the installation of free software. If you want to use a tool that can fix Windows issues efficiently, we recommend using Reimage Reimage Cleaner Intego.

The first sign indicating that this optimization tool might have got installed on your PC is a serious system slowdown and continuous redirects to drivernavigator.com during your browsing. In addition to that, this dubious application adds a Windows Task Scheduler, launches system scans, and supposedly looks for system errors and outdated drivers.

Of course, scan results inform about hundreds of issues. Unfortunately, you have to keep in mind that these results are typically filled with random files from your computer which removal or updating would hardly improve your PC's performance.

They are used to trick you into believing that Driver Navigator EaseWare is a reliable tool and that you need to buy its full license (for 39.95$) in order to fix drivers and other errors. DO NOT buy the license first of all because it is useless.

Besides, keep in mind that for buying it you will be asked to disclose your full name, credit card details, and other similar information. To prevent possible inconveniences you might have to deal with after interacting with the described virtual annoyance, you must think about Driver Navigator removal. We and security experts from DieViren.de[5] recommend using the proper software to clean your computer from unwanted programs. 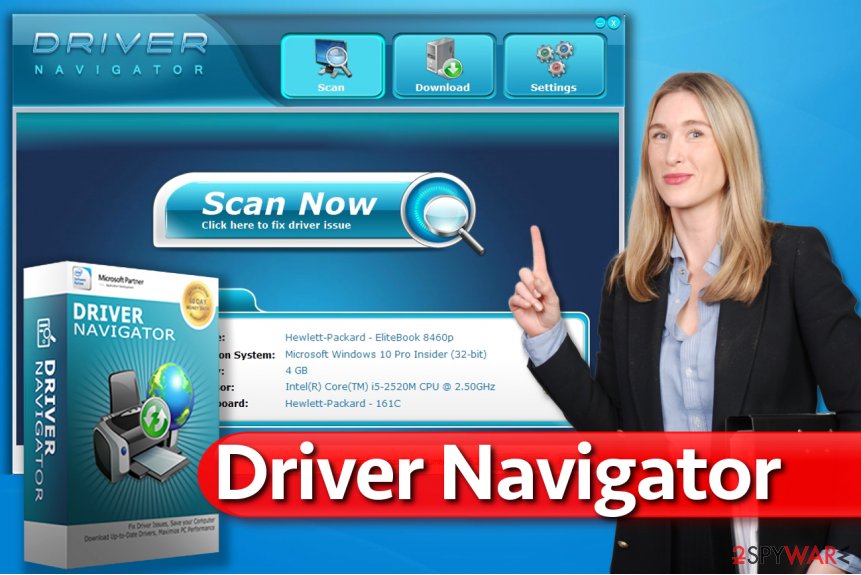 Driver Navigator is an untrustworthy system tool that we do not recommend using. In addition, purchasing the full version of it might be a waste of money.

Find out how PUP programs sneak into your computer

As we have already mentioned in the previous paragraph, fake system alerts and scans can start appearing as if out of nowhere. Be aware that the developer of this program has been actively using “bundling” as the main distribution method of the trial version of this app and other tools.

Of course, the main aim of such programs is to trick people into buying the licensed version of the software. If you want to prevent the infiltration of suspicious apps, you should start paying more attention to the installation process of free programs and the legitimacy of sources you download anything from.

No matter if you are about to install a well-known program or unfamiliar software, either way, you should select the Advanced or Custom installation option and carefully check the entire installation process. The most important thing is to check every checkbox and opt-out of 'optional downloads', such as various browser add-ons, plug-ins, toolbars, and extensions.

If you will do everything correctly, the chances that you will install a PUP or another similar program are very low. Research has shown that this dubious optimization tool is mainly prevalent in the United States, Canada, and Hungary. But PUPs can enter any device. 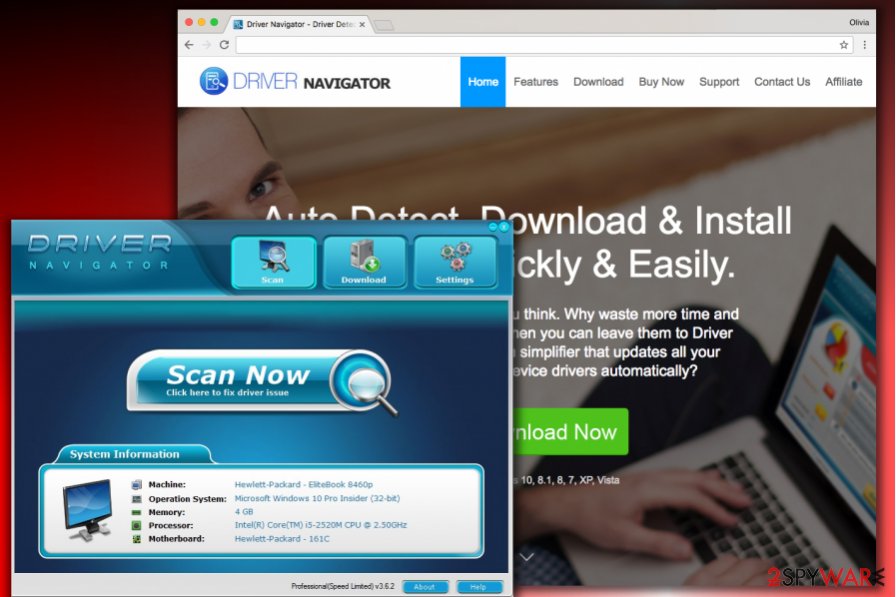 Driver Navigator is the tool that claims to offer various functions of the system application.

The answers you have been looking for

Question. I have been looking for a free Driver Navigator license key so that I could download and install the full software version on my computer. Is there a way to crack this program safely?

If you were looking for “Driver Navigator with a crack free download,” most likely you came across many suspicious-looking websites offering you to obtain the full version of the described software illegally.

We hope that you did not install anything from them on your computer. Otherwise, your security is at risk. In such a situation, we highly recommend testing your system with anti-malware software such as Reimage Reimage Cleaner Intego.

Question. Driver Navigator showed up this morning despite that I have never attempted to install it on my computer. Is there an explanation for this? Since when programs just appear on my computer without asking my permission?

Answer: You could install the Driver Navigator virus unknowingly. Typically, it travels in a bundle with freeware that you can download from various file-sharing networks and sites. Be careful when installing free software and do not forget to drop unwanted items before hitting the “Install” button.

In most cases, suggestions to add unwanted free additions hide behind Default/Standard installation settings. There is no secret that users tend to rely on these settings since they are offered by the setup. For some reason, Custom/Advanced settings scare many computer users, and that is why they miss the chance to drop unwanted extras.

Your question implies that you are looking for instructions on how to remove Driver Navigator. You can find a full-length removal guide right below the article.

If the DriverNavigator virus has already started its fake scans, you should take needed actions to stop them from appearing. Please, make sure you ignore these warning messages and false result sheets because they have nothing to do with the optimization of your computer.

For manual Driver Navigator removal, you can follow the instructions provided right below the article. But all those steps involve changes in certain parts of the machine, settings oft he registry, startup and web browsers. If you don't have enough knowledge about these processes, you can damage the machine instead.

So we recommend running a full system scan with updated security software to make sure that your PC is free of viruses that might have been causing system slowdowns and other problems. Also, you will get a chance to ensure that you managed to remove Driver Navigator completely. For that, you can use one of the software variants listed down below.

To uninstall Driver Navigator, rely on this guide

Once these steps are finished, Driver Navigator should be removed from your Microsoft Edge browser.

Get rid of Driver Navigator from Google Chrome

You can quickly scan the QR code with your mobile device and have Driver Navigator manual removal instructions right in your pocket.