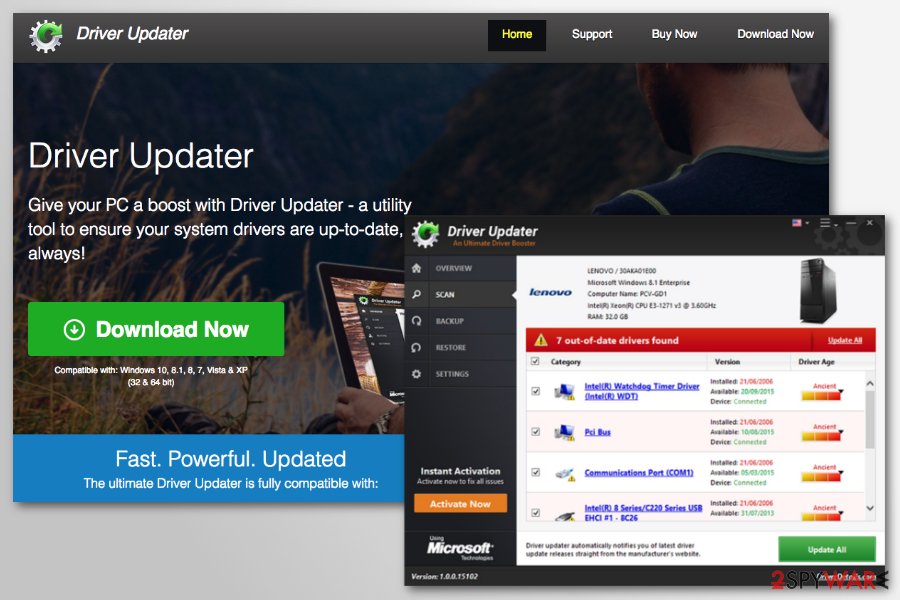 Driver Updater is a bogus driver updater software created by the infamous PCVARK and can be download from driverdetails.com. The application is meant to keep the Windows computer up to date by automatically updating drivers for various PC components. However, the truth is that Driver Updater shows exaggerated or even fake scan results in order to make users believe that their computer is highly unstable. However, as soon as they click on the “Update” button, they are led to a payment page which asks for $29.95 every six months. Essentially you are paying for a tool that can not only compromise your device but also will charge your credit card every six months until you cancel the subscription (which on itself might be quite complicated). Regular Windows users rarely need driver updates, unless they are using their PC for gaming or video editing; and even then there are official tools that can update the computer for you.

PCVARK is a notorious PUP publisher and distributor, with creations like Mac Auto Fixer, Advanced Password Manager, Malware Crusher, and the infamous Advanced Mac Cleaner under its belt. These apps, along with Driver Updater, are mostly distributed with the help of software bundling and are also actively promoted via advertisement campaigns.

Once installed, the application immediately scans the device and, unsurprisingly, finds a large number of outdated drivers. Driver Updater shows numerous entries, all in red, claiming that the system is in danger, making unaware users quite concerned. Fake system optimizers are designed to scare the user, creating the illusion that the only way to fix their device is by paying for the full version of the program.

Based on social engineering, Driver Updater works very similarly to tech support scams, apart from that these are usually shown on Google Chrome, Mozilla Firefox, Safari or other browsers. They claim that the PC is infected with malware, and the only solution is to download bogus software or call the criminals. It is all a hoax, and Driver Updater removal should be performed before it can inflict damage to the system. 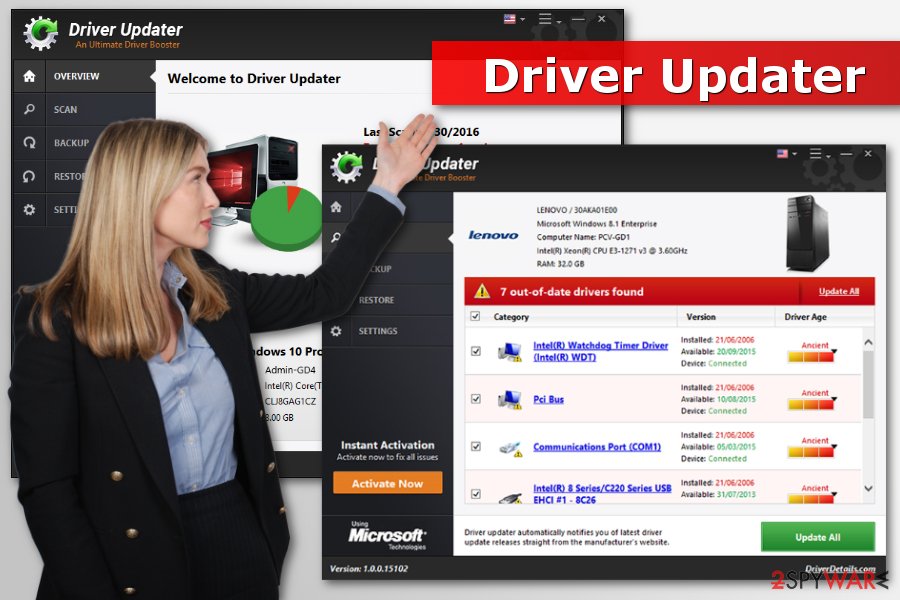 Driver Updater is rough PC optimization software that can sneak into the system unnoticed and trick you into purchasing useless program.

To remove Driver Updater, you should check our guide below. In some cases, the potentially unwanted program[1] might install additional apps to your system without your permission. In such a case, use security software that specializes in PUP elimination, such as Malwarebytes. Once complete, we recommend using Reimage Reimage Cleaner Intego for system recovery – it can remove registry entries created by the PUP and fix other damage done by Driver Updater virus.

As we already mentioned, drivers[2] are an important software component that keeps the operation between hardware and software compatible. In some cases, new released can improve the performance of the device and patch the bugs. However, these releases are relatively rare, and most regular users do not need to update their drivers to keep the normal functioning of the machine.

Generally, you should only update drivers if you are having problems with a device, for example, graphics card. However, you most certainly do not need tools like Driver Updater to do so, as it costs you money and can download wrong drivers, compromising the device.

You can rely on tools like official Nvidia Geforce Experience or AMD application to update drivers securely. Additionally, there are other two options: using Device Manager and downloading them from the official websites. Remove Driver Updater bloatware and do not pay – it is merely a scam and will not provide your computer with anything useful. 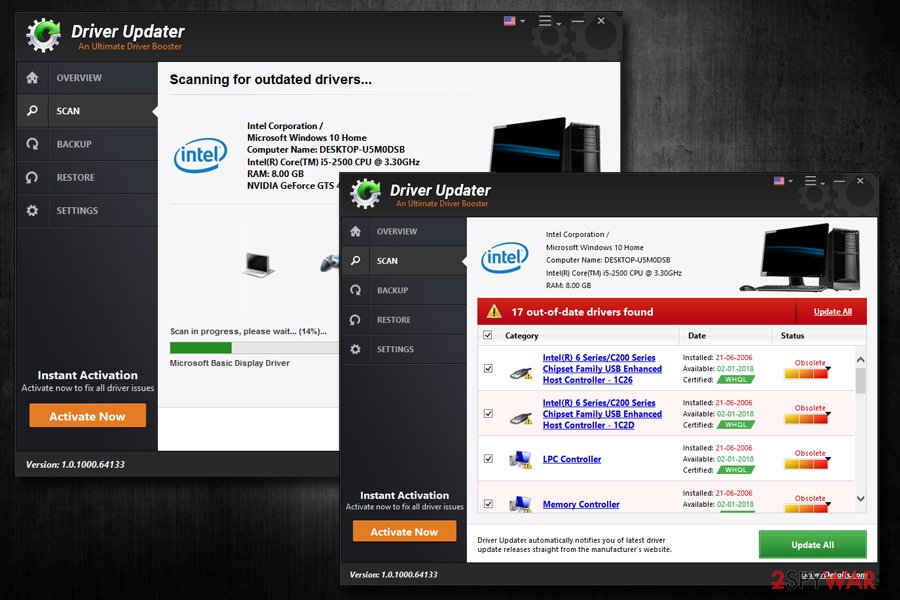 We downloaded Driver Updater to check out its functionality. It found 17 outdated drivers (allegedly back from 2006) and prompted us to update them immediately. We proceeded, and the application was offered to us for $29.95. We declined and continued with Driver Updater uninstallation.

As soon as we entered the Control Panel and selected the program to remove it, we were immediately redirected to the “75% discount offer” and now offered the application for $5.99. We can assure you that it is typical PUP behavior, and no legitimate software developers would do that. That is another reason you should not trust Driver Updater and its developers – it is merely a scam that tries to take your money.

Finally, multiple AV engines recognize the threat as potentially dangerous and mark it as:[3] 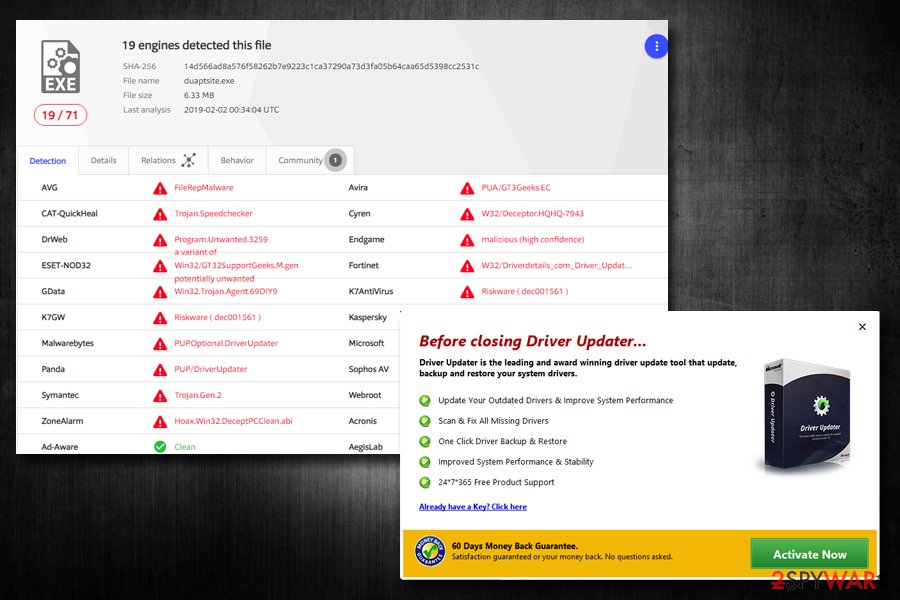 Distribution methods and download sources of the PC optimization software

Driver Updater has an official website that offers to download it directly. Additionally, you can find it available on various file-sharing sites, P2P networks, and similar free download sources. Of course, we do not recommend using them.

However, authors of the program also take advantage of software bundling method that allows spreading it in freeware or shareware packages. It means that this tool can be offered to download with any free program or sneak into the system unnoticed if you do not pay proper attention to the needed software installation.

Specialists from LesVirus.fr[4] note that using Recommended or Standard settings are the easiest way to install PUPs without realizing it. These settings do not reveal about additional components. To avoid unwanted apps, you have to use Advanced or Custom settings only and opt out pre-selected optional downloads.

Uninstall Driver Updater and other PUPs

You can remove Driver Updater from Windows computer just like any other program. Navigate to Control panel, find it and click Uninstall button. However, if you accidentally installed in a software bundle, you have to look up for other unwanted entries that may have been installed too.

To quickly find and eliminate suspicious components that may have been installed on your device, you should opt for automatic Driver Updater removal. All you have to do is to scan the computer with updated and reliable security software.

Check for the suspicious programs and browser extensions that may have been installed together with Driver Updater. Remove all these entries as shown below to get rid of the PUP entirely:

Get rid of Driver Updater from Microsoft Edge

Once these steps are finished, Driver Updater should be removed from your Microsoft Edge browser.

You can quickly scan the QR code with your mobile device and have Driver Updater manual removal instructions right in your pocket.