DriverToolkit is a doubtful optimization utility classified as PUP 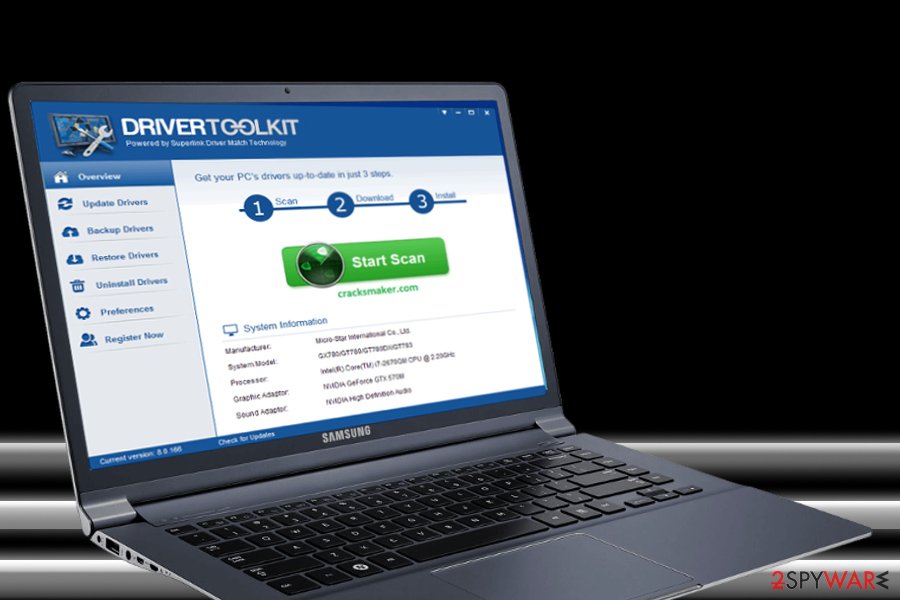 DriverToolkit by Megaify Software Co. is a free software utility that is supposed to clean, repair and optimize PCs. It is said to download or update system’s drivers and perform driver backup. Its database of hardware devices and drivers is supposed to consist of more than 12,000,000 entries. While initially, it may seem useful, AV engines, including Avira, Sophos, and others recognize it as PUP (PUA/DriverToolkit.EL.1).[1] The reason why it has been included in PUP category is related to stealthy installation and doubtful system’s optimization procedure.

Many people reported that their Windows OS slowed down significantly due to high CPU usage by DriverToolkit.exe. This executable file, a 32-bit process that can be found in C:\Program Files\drivertoolkit\drivertoolkit.exe or \Program Files(x86) is directly related to DriverToolkit software. The file has been revealed spreading stealthily and working as a download/install source for Megaify Software products.

If the user inadvertently installs the DriverToolkit.exe file, it creates a Startup process to start functioning each time the user logs into Windows. Consequently, the corresponding DriverToolkit optimizer launches its scanner and may initiate regular system’s scans. The scan results are subsequently transmitted to a server to identify problematic drivers and other components and download the patches or updates.

However, most of the users who have tried this tool refer to it as DriverToolkit virus. One of the reasons is stealthy installation and severe system’s slowdown. Another reason, according to users, is unsuitable software, which eventually causes hard disk failure and similar Windows problems.

Not to mention, DriverToolkit removal may appear to be a difficult task to perform. If the user attempts to get rid of it manually via Control Panel, he or she faces the absence of an automatic remover, or the elimination process ends up with an error message saying:

Windows is unable to find DriverToolkit.exe to uninstall it.

In a nutshell, even though the DriverToolkit virus and the DriverToolkit.exe file are not malicious (security rating 21%), it’s not the one that you should trust. Instead of optimizing the system, it may display false or predefined scan results and ask you to purchase the license.[2] Besides, the longer you keep it, the higher is the risk to experience various Windows errors, slowdowns due to excessive CPU usage by DriverToolkit.exe, and similar problems.

Virukset.fi[3] cyber researchers recommend people to remove DriverToolkit without delay. For this purpose, take advantage of a reputable security tool, such as Reimage Reimage Cleaner Intego or SpyHunter 5Combo Cleaner. If you cannot launch the scanner, try to restart Windows into Safe Mode with Networking (the guide is given below). 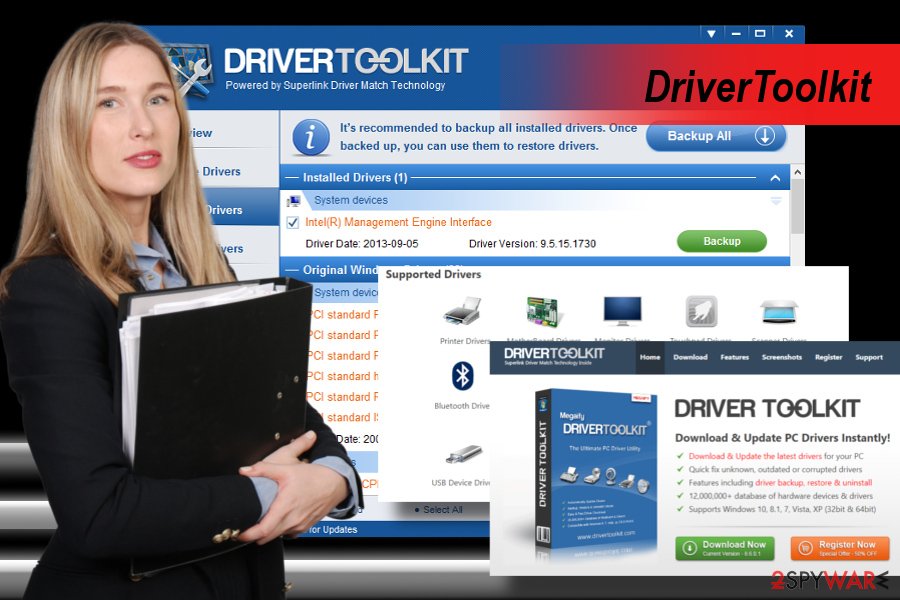 Programs like this one are frequently spread in a bundle with freeware and shareware. Indicated as recommended tools, they are typically marked by default. Therefore, if the user clicks the Next button during freeware installation all the time, your consent to install the entire bundle is counted automatically.

To prevent this from happening, install free apps using Advanced or Custom installation option. Then carefully read all information disclosed and opt out of each additional component. In fact, it’s better not to install a free program that promotes potentially unwanted apps at all.

DriverToolkit malware is potentially dangerous since it initiated doubtful system’s optimization tasks without being asked for that. Besides, the software it installs is highly suspicious and may not be compatible with The current Windows version.

To remove DriverToolkit, download a professional anti-virus or update the one that is currently running on your PC. Run a full system scan and eliminate all the finding. In case you cannot launch antivirus scanner, restart your PC into Safe Mode with Networking as explained below.

It's not known whether the DriverToolkit virus installs web browser's extensions. However, if you have installed it unwillingly with freeware, there's a high possibility for other PUPs to be hiding within your browser. To disable all of them, you should reset browser's settings. The following tutorial on how to reset Google Chrome, Mozilla Firefox, and other browsers will help you.

The following guide explains how to eliminate potentially unwanted program from Windows. If you cannot find the uninstaller, the only way to get rid of is to run a scan with security software while in Safe Mode with Environment.

Get rid of DriverToolkit from Internet Explorer (IE)

Once these steps are finished, DriverToolkit should be removed from your Microsoft Edge browser.

Your opinion regarding DriverToolkit Cancel reply

You can quickly scan the QR code with your mobile device and have DriverToolkit manual removal instructions right in your pocket.