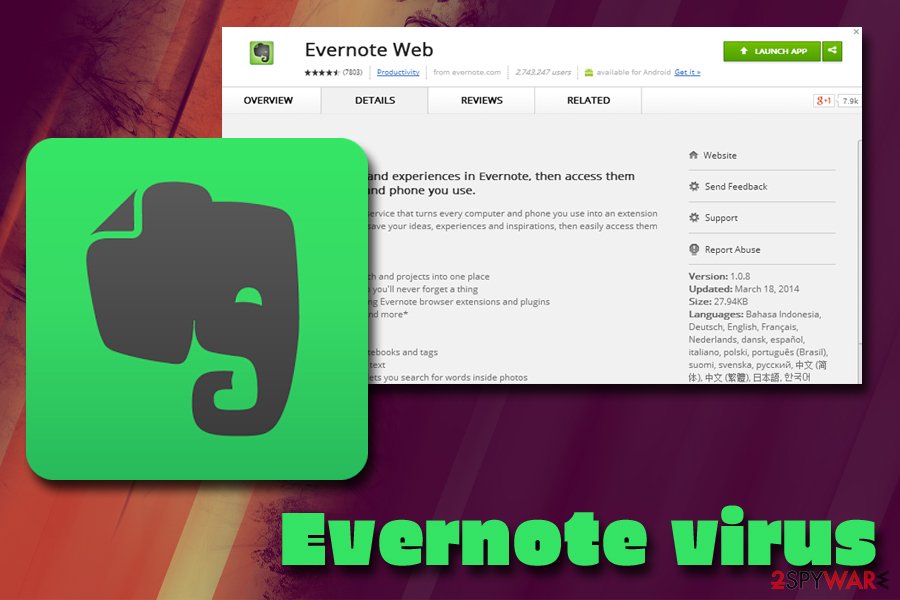 Evernote virus, which is also known as Evernote Web virus, is a term used for cyber infections that can get into user devices by pretending to be an official Evernote app, published by a trustworthy company[1]. The service is designed initially to take notes and organize to-do tasks and has over 1.5 million downloads on Google Play.[2]

It turns out, scammers are using the name of this legitimate company to trick computer users into thinking that they are using a browser extension, while in reality, the malicious version is being installed. Evernote Web virus uses the same name as the real Chrome extension, so it can be very hard to identify whether you are infected or not.

Besides the fake Evernote version, security researchers also recently uncovered a security vulnerability inside the Evernote Web Clipper Extension for Chrome under the code name CVE-2019-12592.[3] It allows hackers to hijack the Chrome Web browser and harvest sensitive user data like cookies, login credentials, and other private information.

Reportedly,[4] Evernote virus, which is a fake version of the official app, s distributed with the help of Multiplug (a potentially unwanted program), which is digitally signed by Sergei Ivanovich Drozdov, who claims to be an open source developer.

This PUP manages to insert the deceptive browser extension to Comodo Dragon[5], Torch, and Google Chrome browsers. Upon the infiltration, Multiplug PUP drops the following files into the host browser extension folder:

Thanks to the inserted JavaScript code, as well as the tricks that Multiplug PUP uses, the fake extension receives a name “Evernote Web,” which can trick users into believing the app is legitimate. While the Evernote virus does not show any symptoms of the infection, there is a small hint that shows discrepancies – when visiting Chrome://extensions page, click on the “visit website” button next to the Evernote Web extension – it will bring you nowhere.

Evernote virus extension loads a content script into every Internet website that the victim visits, and as a result, the user receives a virtual layer of various web advertisements in a variety of different forms – banners, pop-up and pop-under ads, in-text links and more. 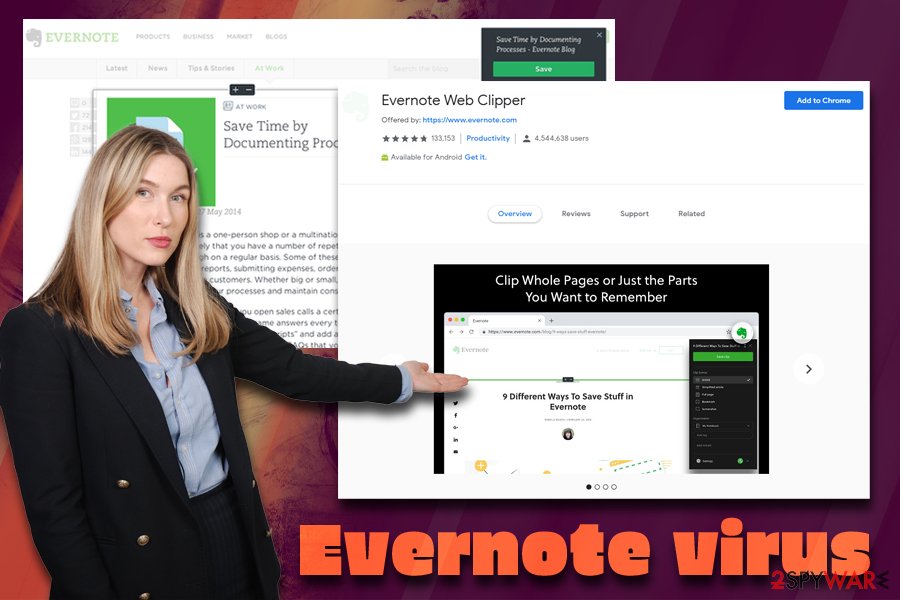 These ads can lead you to highly insecure Internet sites, especially those that promote spyware and malware programs[6]. You should not blame Evernote firm for these ads – it has nothing to do with with the legitimate Evernote app. Instead, you should remove Evernote Web fake extension using a tutorial that we have prepared, or run a system scan with an anti-spyware program for automatic Evernote removal.

For malware termination, we suggest using reputable security applications which should delete the Evernote virus without troubles. Additionally, you should also scan your device with Reimage Reimage Cleaner Intego to restore it to the previous state and remove virus damage.

In most of the cases, such ads appear right after installing some free application without checking what is hiding inside it. As we have already mentioned, Multiplug can easily be involved in the distribution of Evernote web adware.

When inside and active, the fake Evernote virus may not only cause unwanted ads during your browsing. It can also be set to track your browsing habits and redirect you to affiliate websites. While there is no guarantee that each of such sites is safe, you should be very careful with 'ads by Evernote web,' 'brought to you by Evernote web,' 'Evernote web ads' and similar pop-up notifications.

There is no doubt that third-party extensions are useful features used by many users worldwide, as they make the browsing smoother and provide useful functionality. However, letting the unknown code to enter your browser and potentially make changes to the way it operates is much more dangerous than most people think.

It is true that various extensions often require additional permissions to better take care of the tasks they are designed to do. However, when a critical software vulnerability like CVE-2019-12592 gets involved, things get much worse, as even the most private data like banking details might be stolen by cybercriminals.

To exploit the vulnerability, hackers would have to perform the following steps:

The researchers who discovered the vulnerability at Guardio[7] reported the issue to Evernote, and Evernote Web Clipper extension was immediately patched. To avoid this version of Evernote virus, please make sure you run 7.11.1 (or later) version of the application. 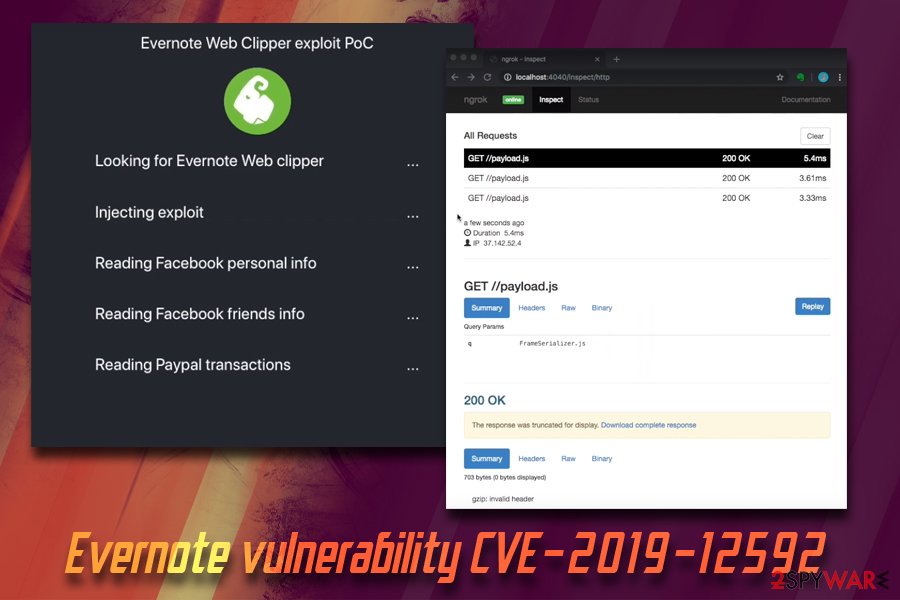 Watch out for the malicious versions of the application

The malicious app's hijack[8] happens without user's knowledge because this fake browser extension arrives alongside Multiplug software. You can accidentally agree to install these programs when installing a free application that you downloaded from the Internet.

In general, potentially unwanted programs are distributed with a help of software developers that seek to increase their income by adding various extensions, plugins and add-ons to their popular free products in exchange for money. That's why we must recommend you to be very careful when downloading such free programs as download managers, PDF creators and video streaming software to your computer because each of them can be filled with optional components.

If you want to check what programs are you installing on your computer, make sure you read End User License Agreement. In addition, if you see no suspicious information, you should select Custom or Advanced installation settings of the freeware[9].

After that, you should follow each of installation steps carefully and opt out of all unknown third-party programs. If you think that this program might be hiding in your PC system, you should follow a guide below and fix it. Leaving this PUP may increase the risk of infecting your PC with malware.

Evernote virus is one of those programs that may trick you into visiting unsafe websites or make you install questionable programs on your computer. To avoid that, you must remove Evernote Web virus and make sure the app you are using is legitimate. You can find the helpful removal guide that we have written below. However, an even easier method to complete Evernote Web removal is to scan the system with anti-malware application and let it clean the system for you.

Besides making sure that the malicious version of the application is terminated, you also need to take care of Evernote Web Clipper Extension that is designed for Google Chrome. The browser checks for all the installed browser plugins updates automatically, although just to be sure, you should check if the Evernote extension is version 7.11.1 or later.

In Windows, you need to remove MultiPlug application and then clean affected web browsers from the fake Evernote extension.

Get rid of Evernote virus from Microsoft Edge

Once these steps are finished, Evernote should be removed from your Microsoft Edge browser.

Go to Extensions tab, find Evernote Web and click on the trash bin icon next to it to delete the extension. We highly recommend you to delete all other unknown browser extensions as well.

You can quickly scan the QR code with your mobile device and have Evernote virus manual removal instructions right in your pocket.