Funmoods has been added to 2-spyware.com for several reasons. If you have been using this program for a while, beware that it may cause several issues on each of your web browsers, including redirects to unknown websites, annoying pop-up ads and slow downs on each of your web browsers. The developers of this program think they are not doing anything bad, but you need only to set this search engine your start page or the default search engine, and you will see how many troubles it may cause.

First of all, we should mention that Funmoods may show up on your computer without any sign. That’s because it has been actively spread with the help of bundling. Also, as soon as it enters the system, it may try to alter its settings. As soon as it finishes these changes, the victim starts suffering from redirects to Funmoods and other websites. Please, do NOT think that such activity is harmless! If you don’t want to be tricked into visiting very suspicious websites, you should stay away from this browser hijacker. Besides, as 2-spyware team notifies, this program may start tracking your browsing activity and may collect your search terms, mostly visited websites and data that you add when visiting them. Beware that there is no information about third parties that are capable of reaching this data.

If Funmoods has already hijacked your web browser, you should stay away from its search results that may be corrupted. If you want to avoid such questionable and sometimes even aggressive marketing technique that seeks to turn visitors into customers, you should remove Funmoods hijacker. The easiest way to remove it and prevent infiltration of other suspicious programs in the future is by running a full system scan with Reimage Reimage Cleaner Intego. Make sure its updated and has a full database if you want to find all components that are related to this potentially unwanted program. 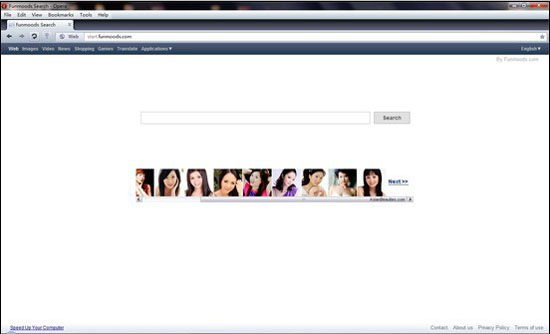 How could funmoods hijack my computer?

There are several ways how you can get infected with funmoods. You can install it yourself because it is presented as a funny tool that allows filling your chats with moods. However, its developers have never been warning PC users that the installation of this program may lead them to various issues, like unwanted ads and redirects. In addition, Funmoods can be installed without your consent because it has also been spread in a bundle with freeware and shareware. If you want to avoid it, you need to monitor installation of the freeware by selecting Custom or Advanced installation option. If this program hijacks your search page and your start page, it may redirect all of your search queries to spammy websites. The most of its ads is related to Russia, such as ‘Meet Real Russian Women!’, ‘Chat with Sexy Russian Women’ and so on.

Funmoods is not difficult PUP, so you shouldn’t find problems when trying to remove it from the system. If you want to get rid of it, you should follow a special uninstall guide, which is provided down below. However, we advise you to use automated tools. The problem is that the most of anti-spyware tools do not detect funmoods as there are several opinions regarding classification of this program. Lately, some vendors tried to add new detection techniques, so we would recommend using automatic removal tools to get rid of funmoods.

Get rid of FunMoods from Internet Explorer (IE)

Change your homepage if it was altered:

Reset MS Edge if that above steps did not work:

If this solution failed to help you, you need to use an advanced Edge reset method. Note that you need to backup your data before proceeding.

Your opinion regarding FunMoods Cancel reply

You can quickly scan the QR code with your mobile device and have FunMoods manual removal instructions right in your pocket.