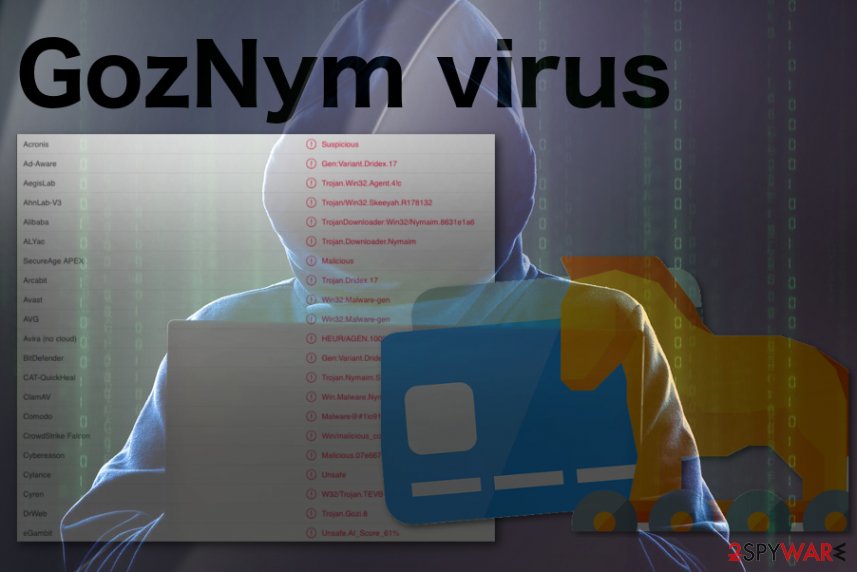 GozNym virus is a modified trojan that uses two known malicious programs to steal money from banks, credit unions, and other platforms. Ursnif and Nymaim are the malware programs used as examples in the coding of this malware. GozNym is designed as a virus that combines functions of dropper and banking trojan to achieve the malicious goal of stealing money from various accounts.

Trojans can perform online banking fraud, steal passwords, or different valuable information, credentials. This banking malware, in particular, is already known because victims suffer substantial financial losses due to this infection. Unfortunately, GozNym trojan contains malicious coding that also damages the system it infects, so various hackers may get access to the device and control the behavior of your PC remotely.

It was first spotted in April of 2016, but it was later determined that malware were active much earlier. It got developed in 2015 when the infections took first hits across the United States. The trojan developers gained more than $100 million from victims all over the world over the years. Although FBI and Europol have responsible people arrested and sentenced,[1] the malware can get distributed by other cybercriminals who either copy the coding of this threat or distribute the similar versions of the banking malware.

GozNym virus is a threat that combines ransomware/ dropper qualities with banking trojan functionality. It works as a banking malware when it steals credentials needed for financial transactions and then initiates fraudulent transfers. Although primary attacks were launched on businesses and financial institutions, this virus can be used to perform fraud, laundering, and other conspiracies involving random people.

This hybrid trojan spreads mainly via spam email campaigns and targets countries all over the world. GozNym virus affects individual users and large businesses. The latter target makes more profit, so the cyber group focuses on large scale financial services and institutions. However, the attack remains the same regardless of the particular victim – virus steals banking credentials from victims' compromised computer.

GozNym virus belongs to the infrastructure of the Avalanche malware distribution network that is responsible for spreading severe cyber threats like the following:

You should be aware that GozNym Trojan emails spread around looking like legitimate emails from businesses, companies, and services, you may use on a daily basis. Experts[4] note that email spam campaigns get more advanced every month. Once the email is received an infected file attachment or malicious link redirects victim to a domain controlled by the criminal. This is how easy banking malware gets downloaded on the computer, you cannot even notice the process. 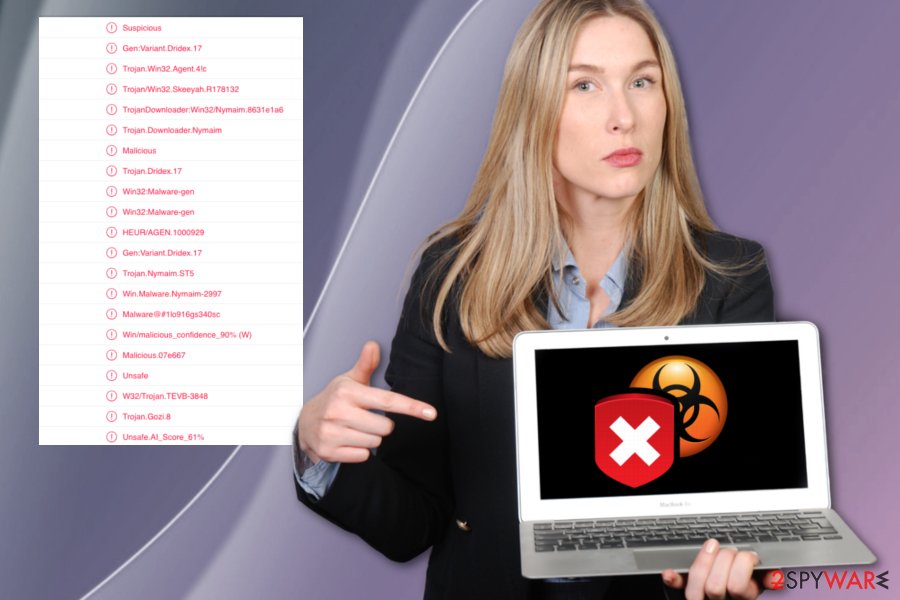 GozNym virus is the financial trojan that targets businesses and companies to steal large amounts of money from their accounts. Although people responsible for the distribution of this malware got arrested, or at least 10 of them, malware samples can be found on the internet and dark web is the place were hackers can obtain anything they want or need. The gang behind GozNym banking trojan might still be active and working on other campaigns.

There were tons of allegations and suspicious, conspiracy theories around this banking malware. It was believed that GozNym virus is a product of a mastermind from Georgia, Russian hackers, and Ukrainian criminals. However, this malware was created back in 2015 and have been active for years.

You should get an anti-malware tool and check the system, so you can have enough time to remove GozNym virus entirely from the machine. This virus involves phishing campaigns and exploits, malicious websites, so additional malware can easily get on your machine.

Get reliable tools for GozNym virus removal and clean the machine thoroughly. Attacks can lead to stolen money, sensitive data, and create more danger to your privacy. Employ Reimage Reimage Cleaner Intego for virus damage removal and make sure to keep the system safe by taking precautionary measures.  GozNym virus is a trojan that installs its code via web browser and steals various information from the victim. More than 40 000 people got victimized by the trojan throughout the years. GozNym Trojan infection can lead to various fraudulent campaigns, and virus may run other processes on the system that users cannot notice until it is too late. This malware is modified to have more functions than any other trojan:

The GozNym network exemplified the concept of cybercrime as a service, with different criminal services such as bulletproof hosters, money mules networks, crypters, spammers, coders, organizers, and technical support.

GozNym virus was created by advanced criminals who had many different roles in the process, so all of them made the malicious attack even more dangerous with the organizational tactics. Each person involved had the role of a coding expert, phishing email sender, or the person that manages all the transactions and financial gains.

There are plenty of malware creators who can obtain GozNym trojan code or create an identical virus and deliver that as a new strain to victims across the world. Stay away from any shady websites, phishing emails, and fake programs that may lead to such infections.

Email campaigns get used for delivering malware for ages now and scammers, cybercriminals get even more advanced and mart about this method of virus spreading. Emails in such attacks get designed to look like legitimate notifications from companies or services like eBay, DHL, FedEx, or even businesses related to the particular target.

Scammers use these emails and attach files or links to them. Once the file gets downloaded and opened, or a hyperlink clicked, the victim is redirected to the domain served by hackers where the automatic trojan installation is triggered. Files attached to such emails ca differ from images, PDFs, sound files, documents.

If you get asked to enable any content on the email itself, suggested to download something from the shady website or the link included int he notification is shortened, so you cannot see the website's name, pay close attention to such email. If you receive an email that was not expected to come, make sure to delete it before opening.

GozNym virus is the threat can install other malware, especially when the initial info-stealing tactics fail. This silent intruder easily can load ransomware on the machine and affect the performance significantly. Also, such threats damage the machine, result in privacy, money loss, or even permanently corrupted device.

You should immediately try to remove GozNym virus when you can see that your device is running slower or crashing from time to time out of nowhere. Get the reliable anti-malware tool and scan the machine thoroughly with the program, so it can detect all the intruders.

When system check results come in, you can perform GozNym virus removal with one of these: Reimage Reimage Cleaner Intego, SpyHunter 5Combo Cleaner, or Malwarebytes. After the process, make sure to double-check with another system scan and clean additional malware or fix virus damage that trojan may have caused.

Finally, you should always think about the protection of crypto-ransomwares. In order to protect your computer from GozNym and other ransomwares, use a reputable anti-spyware, such as Reimage Reimage Cleaner Intego, SpyHunter 5Combo Cleaner or Malwarebytes

You can quickly scan the QR code with your mobile device and have GozNym virus manual removal instructions right in your pocket.