HACKED virus  –  a Jigsaw version – returns in a new form 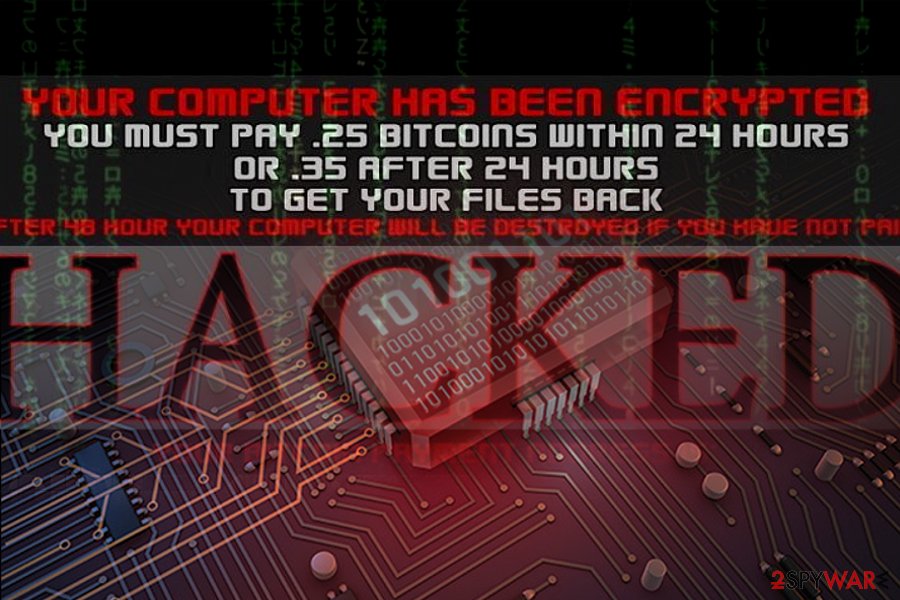 HACKED virus originates from Jigsaw ransomware family. In December 2016, it came as a screenlocker  and appending file extensions. As you may already know, it is not the first time Jigsaw developers are trying their luck with new ransomware versions. CryptoHitman virus, Payransom virus and Payms virus are just a few variants of the virus that the malware analysts have discovered.

The ransom note differs depending on the language, e.g. @readme_English.txt[2]. Unfortunately, the developers managed to wrap the malware in a disguise of Windows update. If you suspect the presence of this malware, make a rush to remove HACKED ransomware. ReimageIntego or Malwarebytes will save your time in dealing with the infection.

How the original version works

It turns out that this new variant of the virus has been obfuscated via AutoIt – a free Windows scripting tool [3]. The first traces of the malware were detected before December last year. Since then, the malware has been changing its veneer — lock screen images and payment GUI. Here is an extract from a prevalent version of the virus.

Your computer has been encrypted
You must pay .25 Bitcoins within 24 hours
Or .35 after 24 hours
To get your files back
After 48 hour your computer will be destroyed if you have not paid
HACKED
Your Bitcoin payment address is:
[Bitcoin_payment_address]

As you can see, the developers have become extensively more aggressive, putting the victim under deadlines and threatening to “destroy” not only the encrypted computer files but the device itself. The hackers don’t go into much detail about how this payment should be issued and how the decryption tool (if there is one) will be delivered to the victim.

In addition to the lockscreen, HACKED ransomware automatically connects the victim to a malicious URL with more detailed ransom payment instructions. The good news is, an access to the browser may help remove the lock screen and access your desktop.

On the other hand, the files remain encrypted even if the screenlock command is deactivated. Unfortunately, there is no guarantee that the promised data decryption key will be granted to you either, that is why we suggest carrying out the HACKED removal without any delay. We suggest using automatic antivirus software like ReimageIntego for this process to go as smooth as possible.

Another interesting feature that has changed in the HACKED version is the addition of .locked and .Locked extensions. These new extension variants add to .versiegelt, .encrypted and .payrmts [4] ones that have already been used by the previous Jigsaw versions.

Could these new extensions be regarded as an allusion to Locky virus, which was the first one to introduce them? Could Jigsaw and Locky ransomware be joining forces? The experts are yet unsure. Nonetheless, they are certain that the sooner Hacked removal is completed the better.

The latest edition exhibits an interesting feature to impersonate Windows update. The malware also presents random note in different versions. Unfortunately, the felons did a good job counterfeiting the update as the screen looks identical to the real one.

However, there are minor flaws which indicate the malicious origin of the update. The entire process takes place in a new window. Note that the logo of your Windows version is absent as well. For instance, in case of a genuine update, you should see the percent indicator and the logo of your used OS, e.g. Windows 7 Professional or Home. Interestingly, this latest version of HACKED also displays a tendency to occupy only Windows 7 systems.

For instance, in case of a genuine update, you should see the percent indicator and the logo of your used OS, e.g. Windows 7 Professional or Home.

Interestingly, this latest version of HACKED also displays a tendency to occupy only Windows 7 systems. Unfortunately, the malware still evades multiple security applications. At the moment, it is identified as Win32.Malware.Bucaspys.C and UDS:DangerousObject.Multi.Generic[5]. The malware also drops How_to_decrypt_files.txt file.

However, installing latest anti-virus updates may significantly lower the probability of a hijack. If you notice its Hk Inc file, hacked.exe running in the Task Manger or the discussed update window, reboot the system and initiate HACKED elimination procedure. 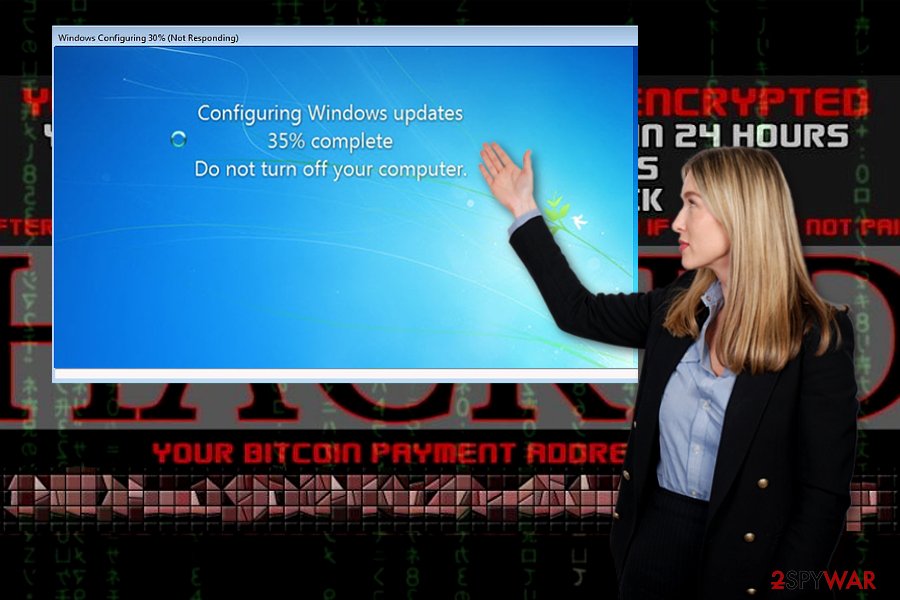 HACKED initiates fake Windows update process. Note that the genuine update does not occur in a a new window

Observing its specifications, it is likely to travel via malicious spam campaigns, corrupt ads or infected links like most infections in this category [6]. Potential victims receive this virus in their email as Word document, spreadsheet or PDF file. Unaware of the potential dangers, users download these files in hopes to find the promised invoice information, legal document or other supposedly important content.

As soon as such email attachments are downloaded and opened, the malicious script does its job and downloads HACKED crypto-malware on the computer. Of course, data backups [7] are always a good solution and most of the time guarantees a successful file recovery in case the computer gets corrupted.

Discussing HACKED removal options, unfortunately, few of them remain. Unless you are an IT expert, manual elimination might be futile as the infection roots in the system. Update your security application and run the scan. In case you cannot exit the lock screen (press ALT+F4) or launch the tool, restart the system in Safe Mode.

Then, you should be able to remove HACKED virus and its components. Note that data recovery would be effective only when you eliminate the crypto-virus entirely.

In case the first method does not seem convenient, perform System Restore.

Guide which is presented above is supposed to help you remove HACKED from your computer. To recover your encrypted files, we recommend using a detailed guide prepared by 2-spyware.com security experts.

If your files are encrypted by HACKED, you can use several methods to restore them:

What is Data Recovery Pro?

In case your system crashed and some of your files got damaged, this tool might be one of the best options. Dealing with HACKED malware, it may not be the best choice. On the other hand, it might succeed in restoring some of the files.

This program uses shadow volume copies to create the copies of the original files. There is no information that the malware deletes these copies so you may succeed in retrieving some of the affected documents and files.

Make use of Jigsaw Decrypter to unlock files with .hacked extension

Since it is a derivative version of Jigsaw malware, you may benefit from the decrypter created for the original version. Note that the latest version might be immune to this software.

Finally, you should always think about the protection of crypto-ransomwares. In order to protect your computer from HACKED and other ransomwares, use a reputable anti-spyware, such as ReimageIntego, SpyHunter 5Combo Cleaner or Malwarebytes

You can quickly scan the QR code with your mobile device and have HACKED ransomware virus manual removal instructions right in your pocket.