Malware Crusher can be downloaded from its official distribution website or distributed as bundled software.

Malware Crusher is an anti-malware application designed by PCVARK and can be downloaded on the official website, although it may also be distributed with the help of software bundling. In such a case, users might find the app making scans after the installation of freeware or shareware. Another reason for Malware Crusher being categorized as a potentially unwanted application is due to misleading scan results. It exaggerates the results in order to make the machine look like it is in a critical state, and the immediate removal of threats is necessary. However, as soon as users want to eliminate them, they find out that they need to purchase a licensed version of the program. Deception and fake scan results is the business model of most system optimizing programs. Additionally, some security software applications detect Malware Crusher as potentially unwanted.[1][2]

The developers claim that the Malware Crusher program is “The best Windows anti-malware for complete security,” which is far from the truth. There are several other reputable anti-virus solutions that are continually being tested by such independent sources like AVTest.[3]

We also decided to do certain testing on the Malware Crusher. We downloaded the application from the official website and installed it. As expected, our system was flagged with hundreds of “threats,” reaching anywhere from registry entries of file recovery programs to .png pictures used by applications. 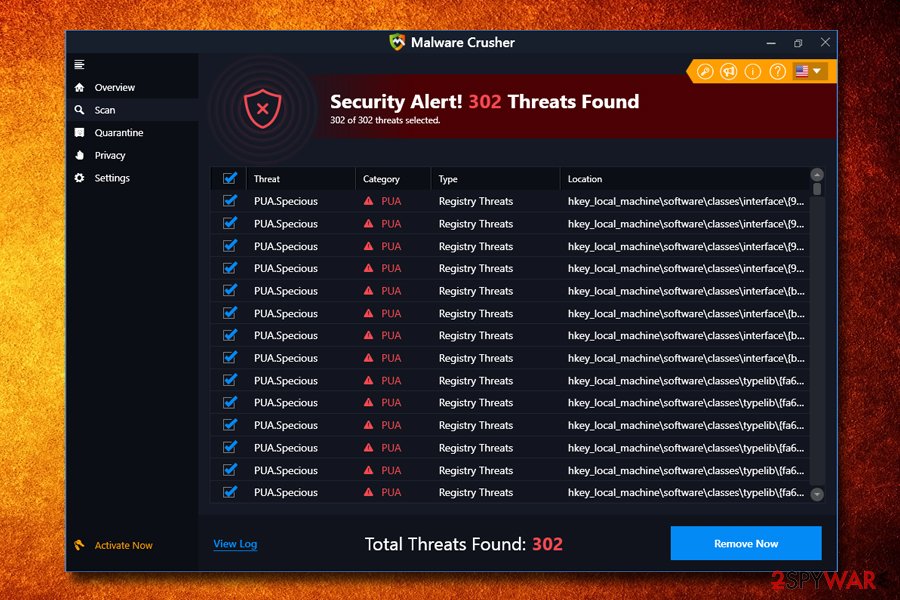 As soon as we wanted to “repair” our computer, the app forwarded us to the purchasing page. We performed a full system scan with Malwarebytes, and all the files injected by Malware Crusher were detected. We then proceeded with Malware Crusher removal.

As we already mentioned, Malware Crusher detects registry entries as potentially dangerous, using visual effects and scare tactics to make users believe that their computers are at high risk. The red text warnings, unprotected browsers, and similar issues. Before you ask, an innocent registry entry will not make any changes if removed, as its size reaches barely few kilobytes.

Mac users also voiced their concerns about the infiltration and elimination processes in the official Apple forums. They noted that Malware Crusher entered their machine with as an optional component from Flash installation and they had troubles with its removal.[4][5]

Finally, even Microsoft is against using registry cleaners[6]. As described by Microsoft, Windows Registry is:

The Windows registry is a database of settings for all hardware, software, and user preferences on your computer that controls how Windows interacts with your hardware and applications. Windows continually references the registry in the background and it is not designed to be accessed or edited.

In the worst case scenario, the modification of the Registry can result in complete system failure, which would require a full reinstall of the operating system.

To conclude, our view on the application is critical, and we do not think that it is a suitable security tool for home users. We suggest you use Malwarebytes to remove Malware Crusher from your PC, especially if it got onto your system seemingly out of nowhere.

We have received a vast of questions from people who wonder “is Malware Crusher a virus?” We want to warn you that this program is legitimate but classified as a potentially unwanted program (PUP)[7] rather than a virus.

However, since its developers are employing questionable scan results which do not act in the best interests of the computer user, some people use the term Malware Crusher virus to describe its negative features.

We highly discourage the use of Malware Crusher application, as there are much better alternatives available. However, if you choose to do so, use it at your own risk. 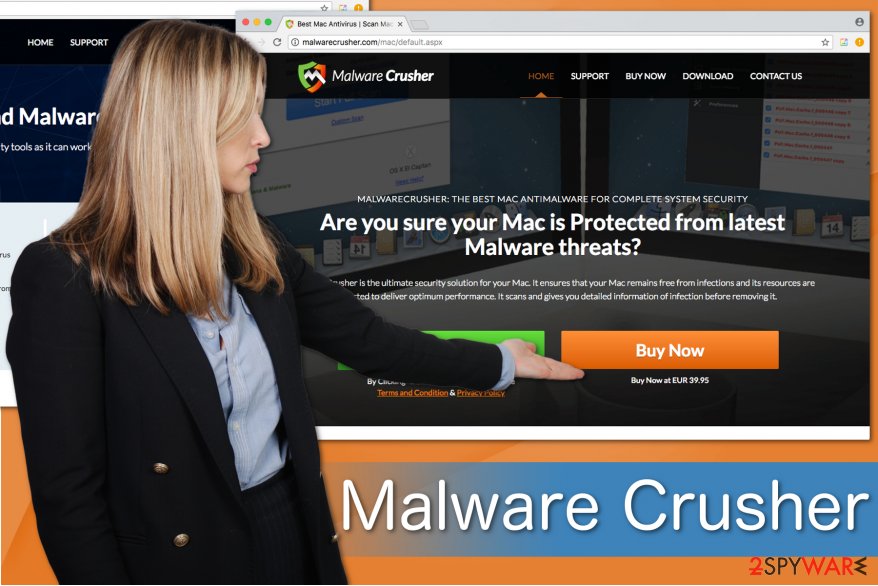 As we have already mentioned, users can manually download the unreliable system optimizer from the official website, or it may sneak inside their computers via bundling method[8]. This technique helps the developers to spread their products without asking the permission of the users whether they want it or not.

Likewise, many people are tricked to install this potentially unwanted program by not paying close attention during the procedure. Later, they wonder how to get rid of Malware Crusher pop-ups and search for methods to uninstall this fraudulent software.

Therefore, we suggest you to learn how to protect against various ad-supported programs like this one. Here are several steps that should be obeyed during the installation of all free applications:

We believe that there are a lot of people who are searching for the answer how to get rid of Malware Crusher completely. Novirus.uk[9] team has informed us that the elimination procedure might be complicated and the software can reappear after some time.

So, we suggest you pick a reliable Malware Crusher removal option and download a professional antivirus. It will help you to check your system for additional entries that might be displaying annoying pop-ups and notifications. Also, keep in mind that this elimination method is automatic. Likewise, the security software will delete the adware for you.

However, if you want to uninstall Malware Crusher manually, you should be very careful. Before you start the elimination, make sure that you are aware of how to complete the procedure safely. For that, we suggest reading our guidelines presented below.

If you have downloaded Malware Crusher's version for Windows, the guide below will explain you how to uninstall this bogus software from your system.

To eliminate the PUP from macOS, follow this guide::

If your macOS is displaying some infection symptoms, proceed with the following guide:

now online
Browser reset guides
Virus Activity Level
Virus Activity
2020-10-30
Increased
Discovered/Renewed Today:
Most Dangerous Today: Will damage your computer. You should move it to the Trash
Get this widget »
News
Malware
Read on mobile

You can quickly scan the QR code with your mobile device and have Malware Crusher manual removal instructions right in your pocket.