MegaBackup is a suspicious application that creates problems to computer users 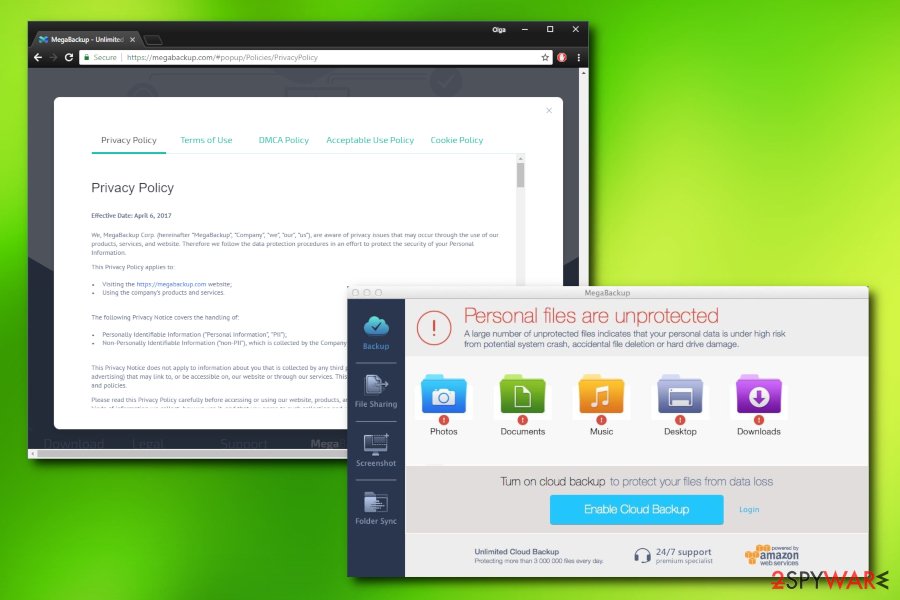 MegaBackup is backup software that is used for cloud services. The app is available for both, Mac and Windows users; however, it is mostly advertised as a Mac product. While the paid version of the program lives up to the expectations, the free option stresses users out due to the continual advertisement on Google Chrome, Mozilla Firefox or Safari browsers. Because of that, the app is considered to be adware[1] rather than using virtual storage platform. Additionally, users complained about MegaBackup removal problems, as the app it troublesome to get rid of.

The dubious application usually enters computers via software bundling. Therefore, users do not notice the process and wonder where the program came from. Combine the rapid appearance, intrusive ads, and elimination difficulties, and you will get people calling it MegaBackup virus.

Similarly to scareware[2] programs that detect various issues on the computer that are false, this dubious app flashes several warnings about the “dangerously” unprotected files. However, users are prompted to subscribe for $4.99 a month for a full MegaBackup version, which would allow the automated backups.

Those who do not agree to upgrade will be spammed with pop-ups, banners, hyperlinks, coupons, video, audio and other annoying ads until MegaBackup removal is performed. The procedure might be complicated at times, and users need to kill running process before they can get rid of it. If you do not want to waste time, we suggest you use Reimage Reimage Cleaner Intego – software that can turn your computer back to normal.

There is a wide variety of PC optimization applications which supposedly boost up the device capabilities twofold. However, users should be alerted not to install corrupted an anti-spyware application. Similar tools, which castaway many promises of superb computer processing speed and additional extra gigabytes of free space, might have significant flaws outweighing the promoted benefits. In fact, there might not be any advantages at all.

It seems that Mega Backup is not an exception as well. Backups are essential if you want to protect your files against the damage incurred by accidental system crash or against file-encrypting malware. In reality, in order to perform a backup, you do not need any additional applications. For example, iCloud service is free, and all users have to do is register by creating an account. Alternatively, backups can be kept on storage devices, such as USB sticks or external HDDs. 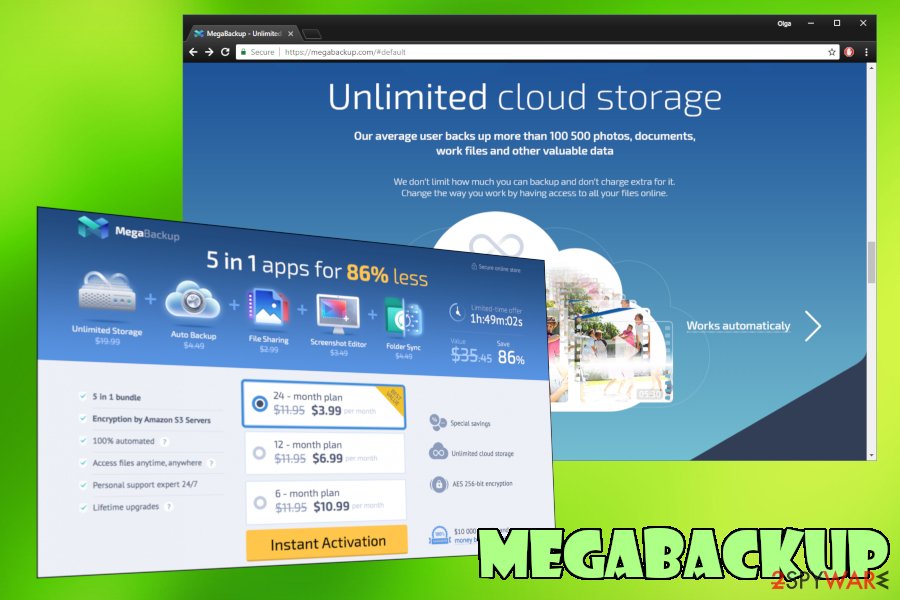 While you can be spammed with irritating ads, it is by far least dangerous feature of MegaBackup virus. The collection of user information raises concerns. Non-personally identifieble information is collected, such as:

Unfortunately, by using MegaBackup, users also agree to share personal data, like email, name, address and payment information. This data is also collected by a third-party company Avangate, so users are highly advised to read their Privacy Policy. Additionally, personal information might be transferred to third-parties due to these conditions:

<…>Therefore, when the company becomes owned by a third party as a result of a merger, acquisition, reorganization, or bankruptcy, customer information may be passed to this third party as well.

While MegaBackup is not malicious, it uses quite much CPU speed which affects the overall PC performance. What is more, the software is suspected of creating more system vulnerabilities. The more the device has them, the higher is the probability that your system might be occupied by a trojan or backdoor. Lastly, you should not expect much from the tool which offers a significant number of various features. Such universal applications might fail to perform one task properly. Thus, if it appeared on your computer suddenly, security experts[3] advise you remove MegaBackup virus ASAP.

The majority of these type of applications have their own websites. Most likely, you might have run into MegaBackup while surfing the Internet. Additionally, this software is promoted by using “bundling” technique. It attaches itself to free applications as optional add-ons.

Unfortunately, users’ inattentiveness facilitates the distribution of suspicious tools. They just skip the installation steps and hit the “Install” button without realizing that unwanted applications sneaked into the system. In order to prevent such infiltration, opt for “Custom” settings after initializing the installation process. Later on, you will be able to spot unwanted optional tools and unmark them.

While you can remove MegaBackup virus manually, some users reported problems doing that. After attempting to transfer the application to the Trash folder, you might see the message that the action could not be completed because the program is running. If you want to stop it manually follow these steps:

Additionally installed adware elements might prevent you from quick elimination. In that case, install a security application which helps you finish MegaBackup removal. The software comes in handy as it can ward off serious cyber threats. Lastly, we attach the standard manual guidelines for eliminating the app below.

Get rid of MegaBackup from Mac OS X system

Once these steps are finished, MegaBackup should be removed from your Microsoft Edge browser.

To clean your Google Chrome browser, reset its settings to default:

You can quickly scan the QR code with your mobile device and have MegaBackup virus manual removal instructions right in your pocket.