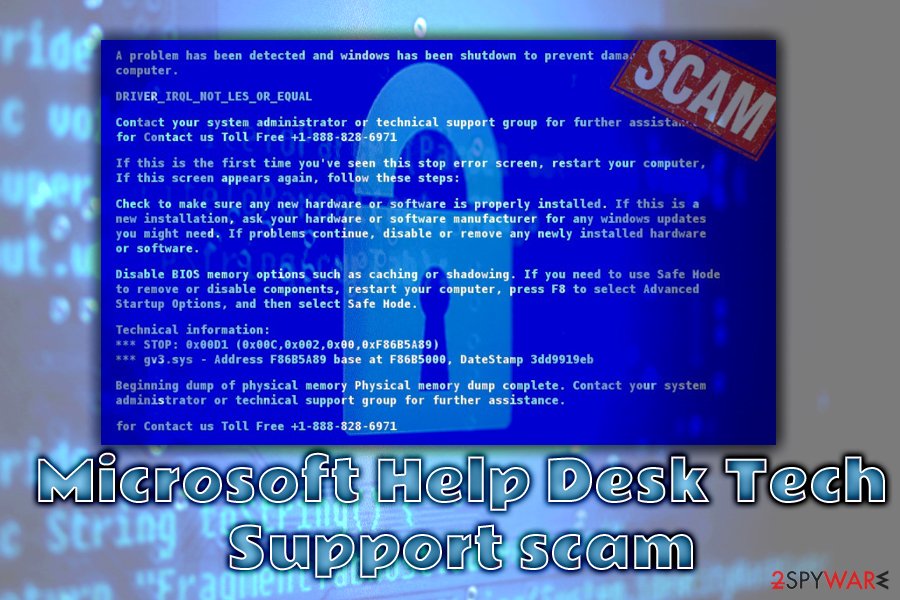 Microsoft Help Desk Tech Support is a fake message that is shown of Windows desktop users after they get infected with a trojan. The bogus error message is displayed as a Blue Screen of Death (BSoD) and does not allow victims to access their desktop or use applications installed. Unfortunately, a PC restart does not prove to be useful either, and users are shown the same locked screen again. As typical for tech support scams, the fake error states about some troubles (in this case, bad actors claim that there is a problem with gv3.sys files), prompting users to call a toll-free number presented in order to fix their machines. However, Microsoft Help Desk Tech Support authors should not be trusted, as this merely a scam.[1]

Though this time the crooks did their best by devising an elaborate scam, some features reveal the true nature of such malware. Therefore, we urge you to remove Microsoft Help Desk right away before it fully entangles your operating system.

You can use reputable anti-malware software that would detect and remove Microsoft Help Desk virus from your computer promptly. However, since the access to the PC is denied, you will have to access Safe Mode with Networking in order to be able to enable security software.

Fake Microsoft Security Essentials window informs that the application has detected malicious files on the system. It also includes the number of a supposed technician number. However, if you do not have this application installed on your device, such alerts look more than fishy. Furthermore, genuine notifications of a reputable anti-virus program never suggest you call any number.

Despite increasing public awareness, tech support scams are on the rise [2]. Recently, the emerging versions of support scams have been improved up to the point that they contain elements of ransomware as well. In relation to this, Microsoft Help Desk Tech also asks you to restart the computer to prevent further damage. Do not comply with hackers suggestions. Rebooting the device might accelerate a process of infection with Microsoft Help Desk Tech hijack. Interestingly, that there has been a rise of file-encrypting malware which impersonates tech support scams [3].

Microsoft Help Desk Tech Support notification also provides technical information to convince of the legitimacy of such claims. It states that some errors occurred related to gv3.sys file. Initially, the original file is a legitimate component of Windows OS files. Such a maneuver tries to cover tracks of the malware. 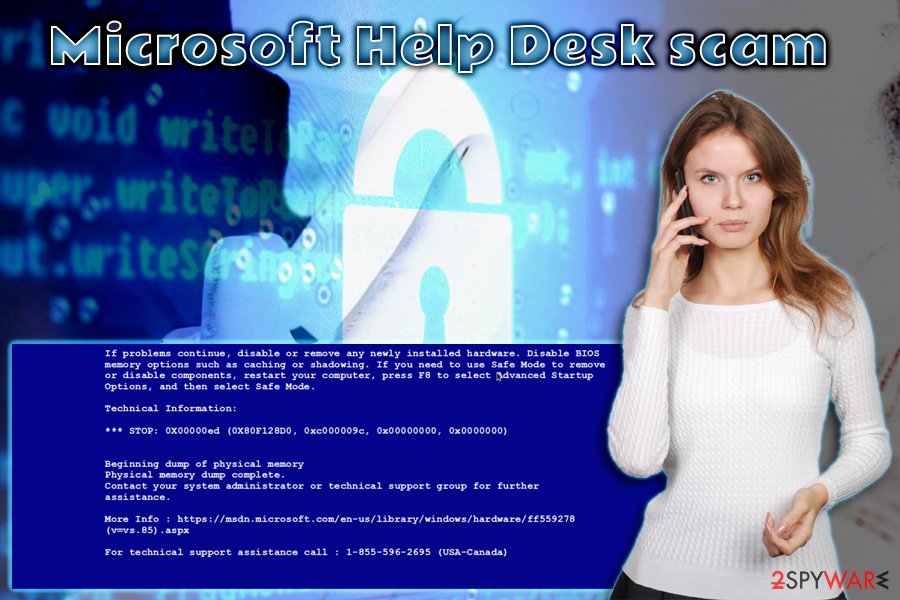 What happens if you call the given number in an attempt to contact Microsoft Help Desk Tech Support fake technicians? There are several outcomes.

In the first case, a felon might lead you through a series of steps which, later on, grant the crooks remote access to your computer. Secondly, due to the “Microsoft Help Desk Tech” redirect, you might be misguided to a domain which contains a bunch of severe cyber infection. As a matter of fact, the very malware is regarded to be a trojan [4].

In any case, we encourage you to start “Microsoft Help Desk” removal. As soon as the elimination is completed and the normal operation of the operating system is regained, you should make use of Reimage Reimage Cleaner Intego software as it can fix all the damage done by the Microsoft Help Desk Tech Support malware.

If you tend to visit questionable and file-sharing domains, the risk to encounter a virus boosts up. By clicking the corrupted link or the ad, you might end up on a malware-ridden website and install a trojan without even realizing it.

Such infections might also fish for new users via exploit kits when users visit hacked or malicious site, where JavaScript scans the machine for certain vulnerabilities that could be exploited. Evading them without a proper security shield is quite complicated [5]. Therefore, we recommend using a powerful anti-malware tool with the real-time protection feature.

Additionally, beware of phishing and scam emails. They impersonate official institutions to convince users into opening the infected attachments. You never know what kind of malware might hide there.

While most scams show up on browsers like Google Chrome, Internet Explorer, Mozilla Firefox, Sari, or others, Microsoft Help Desk Tech Support virus appears as a screen-locker, which prevents users from accessing the machine. Essentially, the scam is a trojan that tries to convince users about the seriousness of the situation.

To remove Microsoft Help Desk Tech Support scam, you should employ reputable security software that is capable of detecting and getting rid of it. But before that, you need to access Safe Mode with Networking, as accessing the desktop is impossible in the normal mode.

As soon as Microsoft Help Desk Tech Support removal is complete, you should run a complementary software like Reimage Reimage Cleaner Intego. It will fully fix the damage done by malware and recover broken Windows files.

You can also try to eliminate the trojan by using System Restore:

Finally, you should always think about the protection of crypto-ransomwares. In order to protect your computer from Microsoft Help Desk Tech support scam and other ransomwares, use a reputable anti-spyware, such as Reimage Reimage Cleaner Intego, SpyHunter 5Combo Cleaner or Malwarebytes

You can quickly scan the QR code with your mobile device and have Microsoft Help Desk Tech support scam manual removal instructions right in your pocket.