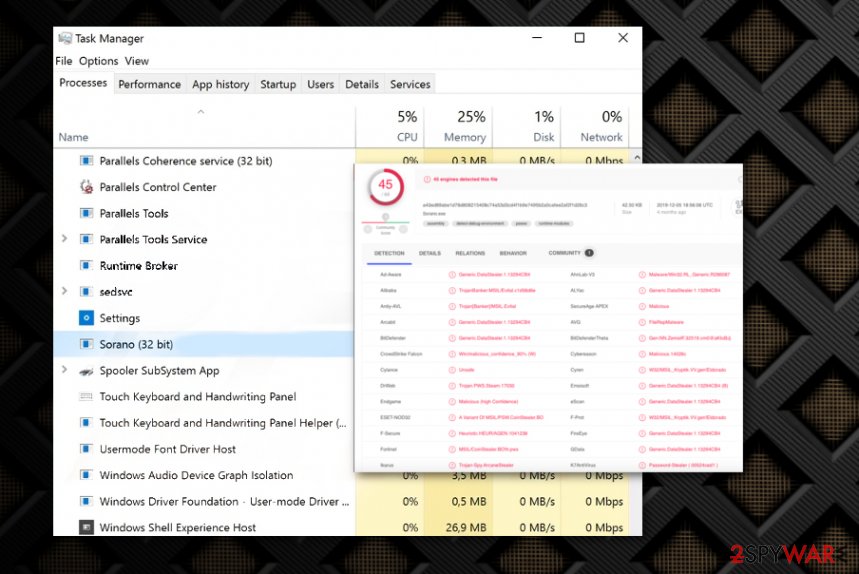 Sorano Stealer virus is the piece of malware that is offered as a product in underground forums and can appear on the targeted systems out of nowhere when hackers release malicious campaigns. This is the information-stealer virus that gathers information in various ways to get details that may help in later blackmail attacks, or the attacker may sell this information. There can by various scenarios after the info-gathering because it depends on the particular goals and modus operand of the cybercriminals.[1]

Some relations with Russian hackers show that this can be the creation of a developer from Russia that makes a big effort to promote and distribute the threat in the wild with the help of such dark web sites and forums. The source code itself of this stealer is placed on the GitHub data, so anyone with more advanced skills can use this code, modify the functions, and spread it around for specific purposes.

Unfortunately, Sorano Stealer utilizes a popular Russian messaging application to transfer data from the affected system to a remote server that is controlled by the attackers, so there can be many uses for the gathered information. It is not known what data this trojan is after, but there are many valuable details that malware can obtain from the computer directly and use other pieces of malware to get. Nevertheless, the virus runs in the background without displaying any symptoms or noticeable features, so the user of the affected machine is not aware of the infection until the suspicious process is noticed in Task Manager or the virus creates frustration due to speed and performance issues.

Sorano Stealer virus is the password-stealing virus that can gather banking details, credentials, and other information valuable for the hacker and other third-party attackers. This is the malware that can be purchased, and cybercriminals may buy the full-on trojan to spread for their own purpose of information gathering.

There is a version of this Sorano Stealer that can be obtained without paying but the publicly available version may not be up to date, so criminals still rely on paying the developers for the malicious program. Analyzing showed that this is a Russian hackers-related threat because it uses Telegram API and is distributed in Russian hacker forums and other sources. This makes the trojan even more dangerous since Russians are known for being notorious and especially malicious.[3]

Sorano Stealer virus acts like a typical malware focused on gathering information, so it can: 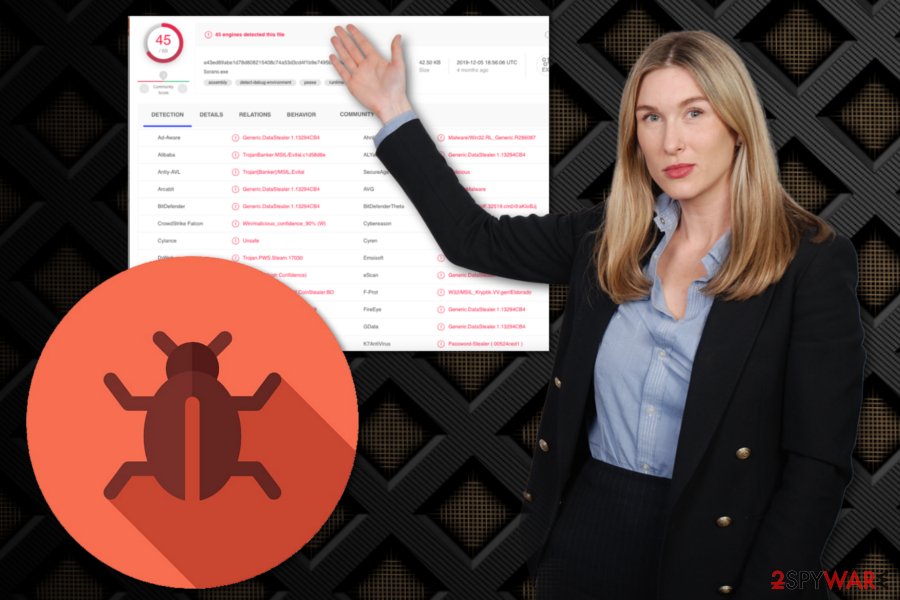 Sorano Stealer virus is the malware that runs silently in the background but can be detected by AV tools. Once the Sorano Stealer virus payload is dropped on the system, anything, and everything can be tracked, recorded, and collected. This is a common malware, so crooks can buy the threat to use it as a hacking tool and install the additional malware like ransomware or cryptocurrency miners.

The worst feature of this Sorano Stealer is the fact that anything the trojan is set to do cannot be noticed by the user or quickly eliminated. The malware can run all the needed processes, gather information, and vanish without causing any symptoms. Luckily, some more cautious users can notice issues with the speed and performance of the system went his malware is affecting their device.

In cush cases, you may react sooner and remove Sorano Stealer virus in time before the disaster. If you spot any changes in the performance, notice the Sorano process running in the background or different file, process on the Task Manager, you need to react as soon as possible and scan the machine using proper AV tools. The detection rate[4] should help you with the proper tool selection.

Sorano Stealer virus removal is an important process that requires anti-malware tools because you need to find and terminate all the related files, programs, and applications that can potentially pose a danger or cause damage to your device. This is a product of cybercriminals you need to remember that and react as if your device has been affected by serious malware.

Since you cannot know how long the Sorano Stealer virus is running in the background, you are not aware of how damaged the system can already be. Anti-malware programs can find malicious software and files that are involved in the malware campaign, but you need additional help from ReimageIntego or a similar optimizer software that locates and repair affected files or corrupted functions of the system.  Sorano is the info-stealer virus that gathers passwords, banking information and can lead to identity theft.

You do not know when or how this malware got on your system because trojans and other malware like this spread around using malicious files and other methods involving scripts of the malware. Files with malware payload get attached to email notifications and included in the pirated software packages. When the user is not paying enough attention to such details like senders, sources, and additional files, the script is triggered directly on the machine.

If you want to avoid these installations, you need to take a closer look at emails you receive and the details that may become the red flag. Typos, grammar mistakes, and unknown senders should raise questions and encourage you to delete the received email instead of opening the message or downloading the file, clicking the link in the notification.

You should consider this malware as a serious danger to your privacy, system, and even security because anything gathered by this virus can lead to blackmail campaigns and damaged machines when the additional virus gets added after the trojan infection. Make sure to remove Sorano Stealer virus as soon as you notice issues with performance. If you check the system with SpyHunter 5Combo Cleaner or Malwarebytes more often you may terminate malware before it affects your machine.

Sorano Stealer virus removal is pretty quick if you choose the reliable program and run the full system scan during with AV detection engine can find and indicate any possible intruders for you. When this is done, you can see all the malicious programs and files, delete them with a few clicks and clean the system. After that, the only procedure left to do is ReimageIntego that manages to fix virus damage and repair system files that create issues.

Finally, you should always think about the protection of crypto-ransomwares. In order to protect your computer from Sorano Stealer and other ransomwares, use a reputable anti-spyware, such as ReimageIntego, SpyHunter 5Combo Cleaner or Malwarebytes

You can quickly scan the QR code with your mobile device and have Sorano Stealer virus manual removal instructions right in your pocket.