W32.aidetectvm.malware is the generic identification that states about malicious computer threat that can introduce malware to the system 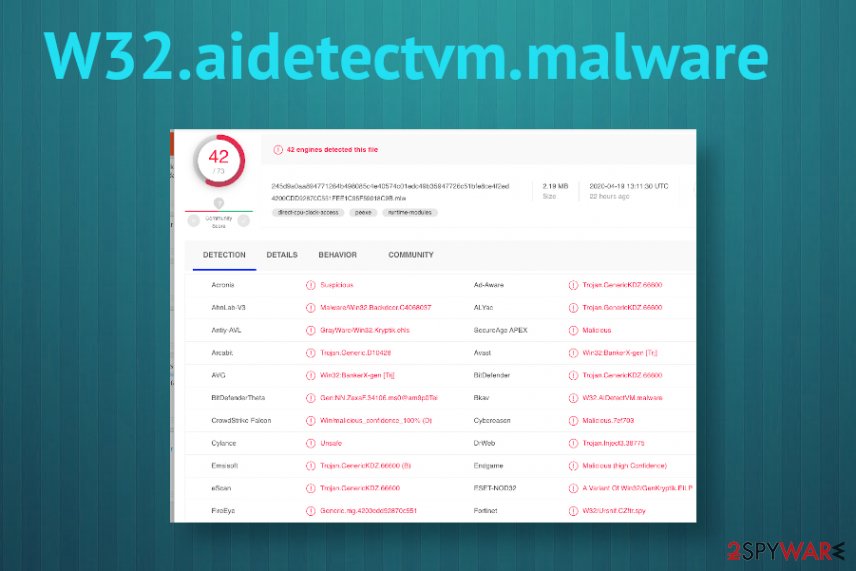 W32.aidetectvm.malware is the infection that makes your computer running slow and crashing more than usual. All the frequent shutdowns and unwanted pop-ups, errors, even system alerts should indicate that there is something wrong.  This name of the threat, in most cases, is the result of the AV detection-based program[1] because the anti-malware program spotted a suspicious file or activity that possibly can be associated with internet criminals or malware. Various vendors can show the same detection result due to different reasons because some of them indicate the suspicious software or a web browser-based virus, domain. This is the result that appears on the Windows operating system and indicates that 32 bit is the type of OS in particular. Users,[2] have no idea why the alert is displayed because these errors occur out of nowhere. This is normal, because sometimes these detections may be falsely positive and indicate non-existent issues.

W32.aidetectvm.malware is possibly a false positive result that is not related to any intruder or issues on your device, but AV tools are designed to detect and indicate possibly dangerous or even malicious programs, files, and even sites where user can get exposed to malware-laced material.

However, detection results and pop-up alerts with results like this can appear all the time, if that is the case, you should react and try to remove W32.aidetectvm.malware as soon as possible. The best results can be achieved with a tool that warned you about the danger, in the first place. Your machine may perform poorly due to occurring pop-up alerts alone, so the sooner you find a solution, the better.

If W32.aidetectvm.malware virus appears to be a trojan or a different type of dangerous computer virus, it can:

W32.aidetectvm.malware may run in the background and reinstall itself to keep the persistence up. Such stealthy threats aim to take advantage of the system, exploiting various flaws, and once important parts get affected, the virus can spy on victims directly or execute any codes without the indication that there is an intruder. This fact that trojan can run undetected for a while makes it more dangerous and damaging.

You should consider that when you focus on W32.aidetectvm.malware removal because when the threat has its roots deep in the system, all associated applications and files need to be deleted to remove the infection fully. For this purpose. experts[3] always recommend going for proper system tools like ReimageIntego that can also repair damaged files, affected or corrupted programs for you when the detection is falsely positive due to incompatibility issues, for example. 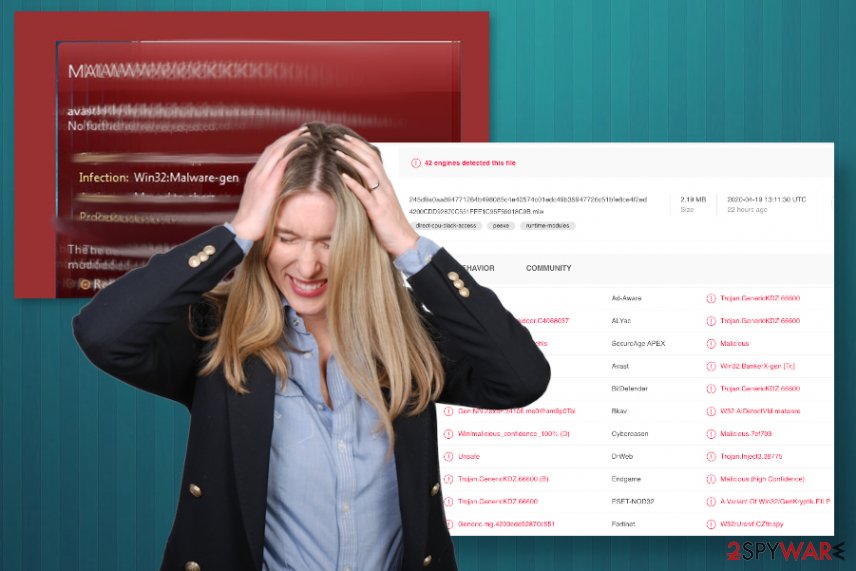 W32.aidetectvm.malware is the generic detection name that appears on warnings and alerts from the anti-malware tools. W32.aidetectvm.malware can be set to do a handful of processes and have many features that usually are affecting the system significantly, but cannot be noticed in time. Malware like trojans or worms can execute commands that expose the machine to a malicious actor or run the additional script of threats like ransomware and cryptomining viruses.

The name of the trojan virus comes from the ability to invade the system silently, so the infection can run for a long time until you notice anything disturbing or the AV tool that you use indicates W32.aidetectvm.malware as a possible issue. Malicious actors behind the threat can aim yo gain access to sensitive information stored on your device or even target passwords, credentials, other login details. banking account data.

Personal information is one of the more valuable things that malware creators may design their products to gather. W32.aidetectvm.malware can be a tool used to achieve particular tasks of cybercriminals. Since cryptocurrency is the second thing that malicious actors may focus on, you may receive a virus that runs on the resources of the machine and generates Bitcoins for the creator.

Once trojans end up on the computer, it is possible to get a ransom-demanding malware that directly blackmails money from you. The most important thing is to react as soon as possible and clean the machine fully from all the threats, so there is no opportunity for W32.aidetectvm.malware or any other virus to repeat the infection in the future.

Stay away from suspicious materials to avoid malware infections

Most of the threats that are based on stealthy infiltration and silent background processes get distributed with the help of malicious files. However, malware-laced file distribution techniques also can differ. Various web pages and sites that are harmful replicas of legitimate pages and sites designed exceptionally for malware distribution can drop files with malicious scripts on your device and lead to serious issues immediately after that.

Also, stay away from spam emails and notifications received from unknown sources, senders that resemble companies or services that you don't use or rely on. Such emails include links to those malicious pages or direct files like documents or executables that rigger the launch of a virus script. Always scan the attachment with the malware protection tool before loading it on the machine.

You should also pay attention to the content you visit willingly, sites that you rely on for software downloads, and other purposes. Read the license agreements and privacy statements of sites that become the source of your applications. downloading anything from operating services and untrustworthy sites can lead to serious problems with the machine and even result in identity theft or money loss.

You may think that the W32.aidetectvm.malware virus is damaging your machine the minute you receive an alert with the name of this intruder, but the infection might not even happen when the detection is falsely showing up on the computer screen. This is the threat that can possibly infect Windows devices, but there are not many symptoms that users can notice.

The first reason that should be a red flag and make you want to remove W32.aidetectvm.malware is the general performance of the machine that gets affected by the trojan because the computer starts running slow and crash from time to time. You need to be cautious and pay attention to any system performance changes, so run the AV tool to found out what is wrong.

If you use professional anti-malware tools already, W32.aidetectvm.malware removal shouldn't be difficult or cause any issues for you. The detection with this particular name can indicate various threats, so when you run SpyHunter 5Combo Cleaner or Malwarebytes, and the result shows up, you need to follow the steps and clean the machine from the malware yourself.

After all these processes, you should also use ReimageIntego for the help with possible damage or corrupted files that may be the initial reason why you see the alert about a possible security issue that may not even exist.

System reboot in Safe Mode with Networking can make a huge difference in this W32.aidetectvm.malware removal process

W32.aidetectvm.malware trojan can get terminated with the help of System Restore feature

Finally, you should always think about the protection of crypto-ransomwares. In order to protect your computer from W32.aidetectvm.malware and other ransomwares, use a reputable anti-spyware, such as ReimageIntego, SpyHunter 5Combo Cleaner or Malwarebytes

Your opinion regarding W32.aidetectvm.malware Cancel reply

You can quickly scan the QR code with your mobile device and have W32.aidetectvm.malware manual removal instructions right in your pocket.