W32.P2P.Tanked is a computer worm which can help infiltrate other cyber threats 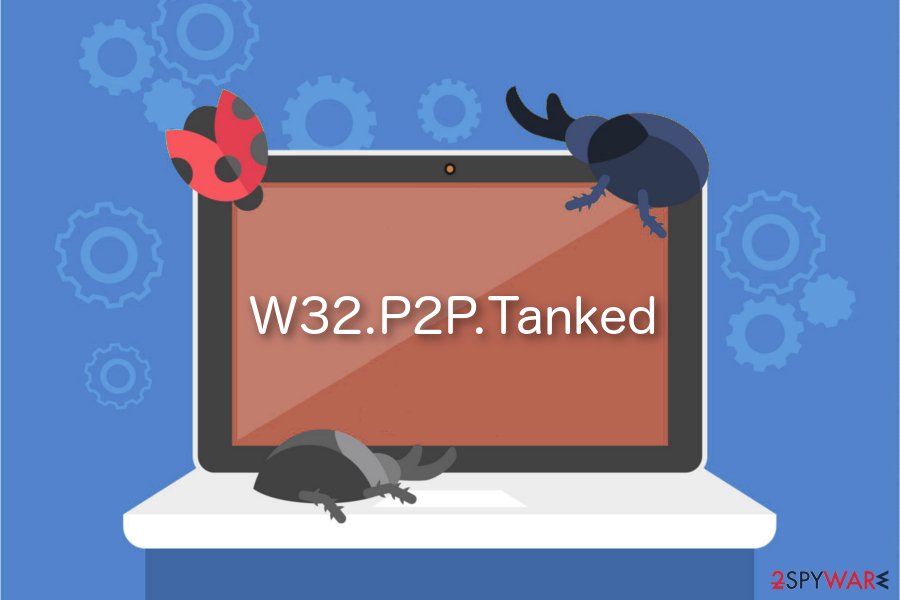 W32.P2P.Tanked is a worm[1] which can replicate itself and spread through the network. Its primary purpose is to infect other computers connected to the network while remaining active on the attacked system. Usually, these type of cyber threats does not perform system changes. Although, they might include a backdoor[2] feature to infiltrate other malicious programs on the computer.

Experts note that users can get infected with W32.P2P.Tanked while downloading software from peer-to-peer (P2P) KaZaA and iMesh file-sharing sites illegally. Keep in mind that it is tough to detect computer worms as they do not display any visible window once settled on the system.

Additionally, W32.P2P.Tanked is programmed to hide its presence on the computer and operate in the background only. According to the research, there are numerous different names which are used by this cyber threat, including the following:

Furthermore, researchers warn that W32.P2P.Tanked might have Trojan capabilities and help cybercriminals gain control over the infected device remotely. As a result, this activity might be used against the user to infiltrate more malicious programs on the system or even network. 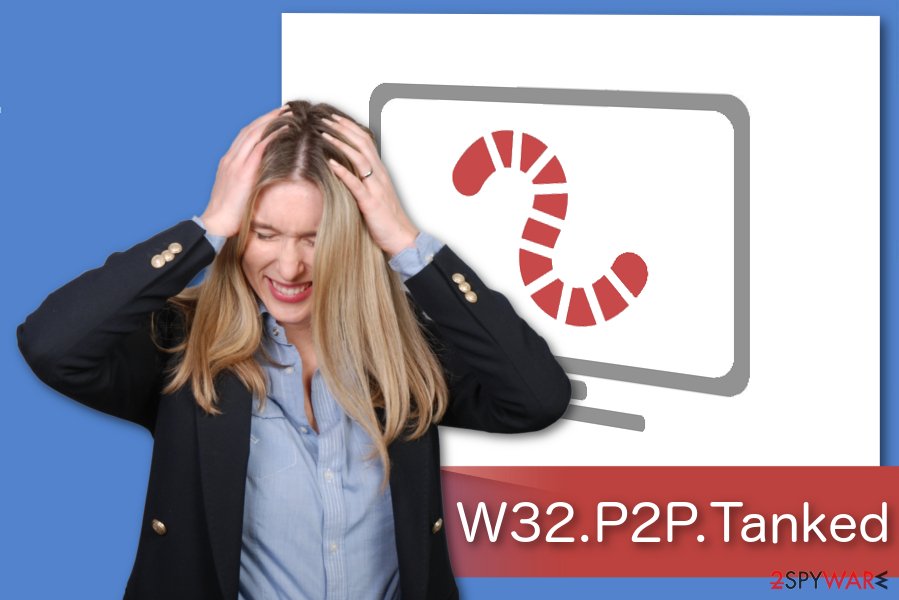 W32.P2P.Tanked is a dangerous cyber threat which can reach targeted devices via KaZaA and iMesh file-sharing sites.

Likewise, you should be cautious of this dangerous cyber threat and remove W32.P2P.Tanked as soon as detected. Since inexperienced computer users might not be able to identify this infection, they are advised to keep a professional security software running on their systems.

For W32.P2P.Tanked removal you can use ReimageIntego or another reliable antivirus. Be aware that urgent elimination is a must if you want to avoid further damage to your computer by other malicious programs. Thus, do not hesitate and uninstall W32.P2P.Tanked right away.

Although, experts note that there is a substantial risk that this computer worm might be delivered via spam emails as well. Keep in mind that scammers deceive users by sending electronic letters with fake invoices or shopping receipts to infiltrate cyber threats. Likewise, stay away from suspicious emails to avoid infections.

Finally, it is not only essential to download software from official websites and check for authorized developers but also keep your operating system and antivirus up-to-date. Computer worms exploit vulnerabilities to circumvent the system and attack the computer. Thus, updates and patches keep your PC secure.

As this cyber threat hides its presence and is capable of infiltrating other malicious programs, W32.P2P.Tanked removal is more challenging than you think. Researchers[3] say that is essential to detect all worm-related components and additionally uninstall other cyber threats to protect your system.

Likewise, if you try to remove W32.P2P.Tanked manually, there is a substantial risk that you will leave some of the malicious elements and the worm would reappear after some time. Therefore, get a robust malware removal tool and let it perform the elimination.

Our top choices to help you uninstall W32.P2P.Tanked are ReimageIntego, SpyHunter 5Combo Cleaner, and Malwarebytes. If you can't download one of these antivirus programs, you should try to disable the worm by booting your computer into Safe Mode as shown in the instructions at the end of this article.

Reboot your computer into Safe Mode with Networking if you can't install an antivirus.

Finally, you should always think about the protection of crypto-ransomwares. In order to protect your computer from W32.P2P.Tanked and other ransomwares, use a reputable anti-spyware, such as ReimageIntego, SpyHunter 5Combo Cleaner or Malwarebytes

Your opinion regarding W32.P2P.Tanked Cancel reply

You can quickly scan the QR code with your mobile device and have W32.P2P.Tanked manual removal instructions right in your pocket.