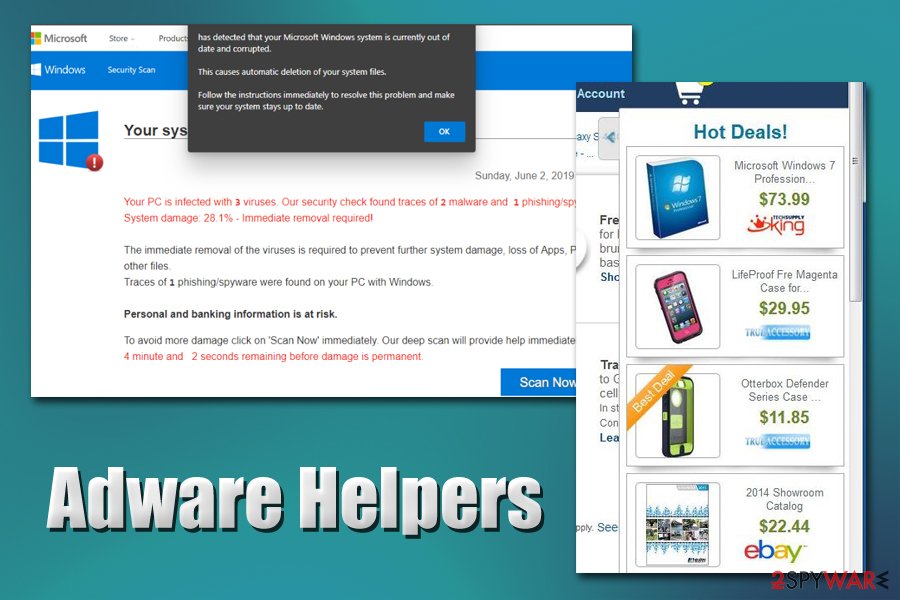 Adware Helpers is a potentially unwanted program and malware that can display ads, hijack browsers and also proliferate other malware

Adware Helpers is a detection name of various adware programs that may be used to perform a variety of different tasks on the host machine. Potentially unwanted applications that are marked in such a way can vary greatly – some might possess browser hijacking capabilities, while others might be much more malicious and gain root access to the infected device. Therefore, Adware Helpers virus should never be ignored, as, in some cases, this threat can be just as bad as malware.

The main goal of Adware Helpers is to deliver users advertisements while they browse the internet via Google Chrome, Safari, Mozilla Firefox, Internet Explorer, or any other browser. Ads are one of the main ways to monetize for application developers, although, in case of adware, the delivered commercial content is not always safe, and may result in personal information disclosure to unknown parties, installation of other PUPs/malware, monetary loss due to frequently encountered scams,[1] and much more.

Adware Helpers, among many other potentially unwanted programs, is usually installed unintentionally, mostly through the bundled software installers. Typically, a few apps are packed into a freeware installer that users download, and merely do not notice the optional components [hidden] inside. Additionally, Adware Helpers virus may also be installed unintentionally after being tricked by an attractive commercial or a fake Flash/Java update prompt.

The typical symptoms of Adware Helpers may include, but are not limited to:

It is also worth mentioning that plenty of background activities are often associated with Adware Helpers, which include information gathering. A typical adware program is set to collect the IP address, web browsing history, Internet Service Provider, geolocation, links clicked, sites visited, and other anonymous data with the help of such technologies like Flash cookies, web beacons,[2] pixels, etc. This data is later used to deliver personalized ads and might be sold to third-parties.

However, as mentioned above, the presence of Adware Helpers might indicate that your system is infected much worse than you might think, as some instances of the parasite are known to inject malicious processes into the computer. These can ensure that the app reinstalls itself, collects personal information, sends spam, and performs other activities on the infected computer. 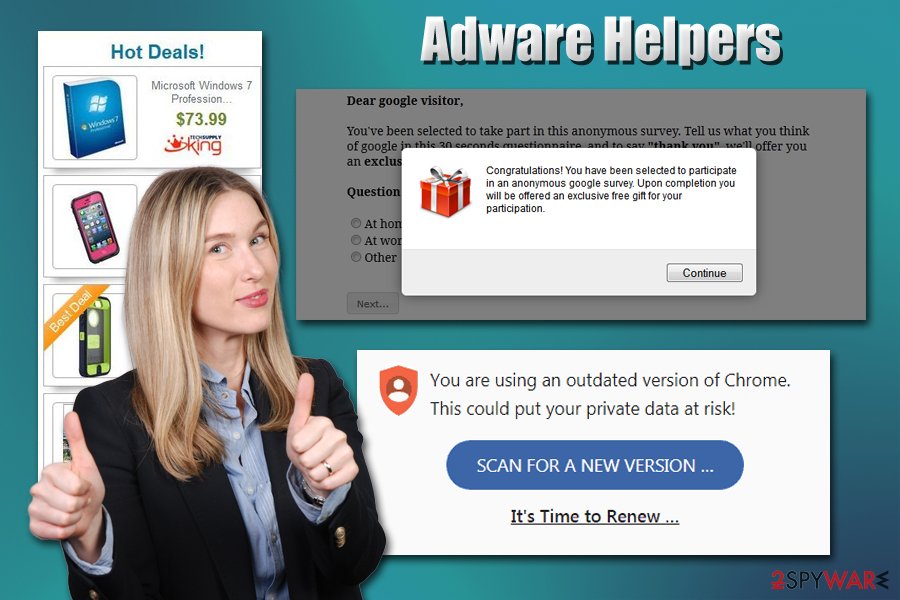 If anything, Adware Helpers removal will improve your web browsing experience – ads that pop-up seemingly out of nowhere will be gone. Depending on the severity of the infection, however, the process might not be as simple as it seems, as Adware Helpers may be a rootkit[3] or another persistent type of malware, such as Backdoor.Win32.Rbot.

In such a case, you can only remove Adware Helpers with powerful anti-malware software and then use Reimage Reimage Cleaner Intego to repair all the system damage. If the case of the infection is mild, you can also attempt to terminate it manually, as per our instructions below.

Adware infiltration is often deceptive, although mostly initiated by users themselves. The automatic intrusion of PUPs may only be possible if there is another malicious program already installed on your system (such as a backdoor). Since not all malware is designed to steal information or lock your personal files (ransomware holds files hostage until a ransom is paid in Bitcoin, making it one of the most devastating computer infections), it can also be employed to divert the HTTP traffic and install other ad-supported apps, resulting in an increased amount of ads.

Thus, the number one thing to remember when dealing with online threats is the way you install your software. For example, going to shady torrent or cracked software sites is not a good idea, as these websites are often booby-trapped with malicious scripts and Trojan downloads. Thus, the best way to avoid adware and malware is by picking a reputable source for downloading applications, such as Google Web Store, Amazon, etc.

If you still think that you need third-parties to download new apps, please be aware that software bundling is often used by such sites. Therefore, during the installation, make sure you never skip steps, read the installation instructions carefully, decline all the offers, and watch out for pre-ticked boxes. Most importantly, always opt for Advanced/Custom settings instead of Recommended/Quick ones when prompted, as potentially unwanted components are often hidden behind the latter. 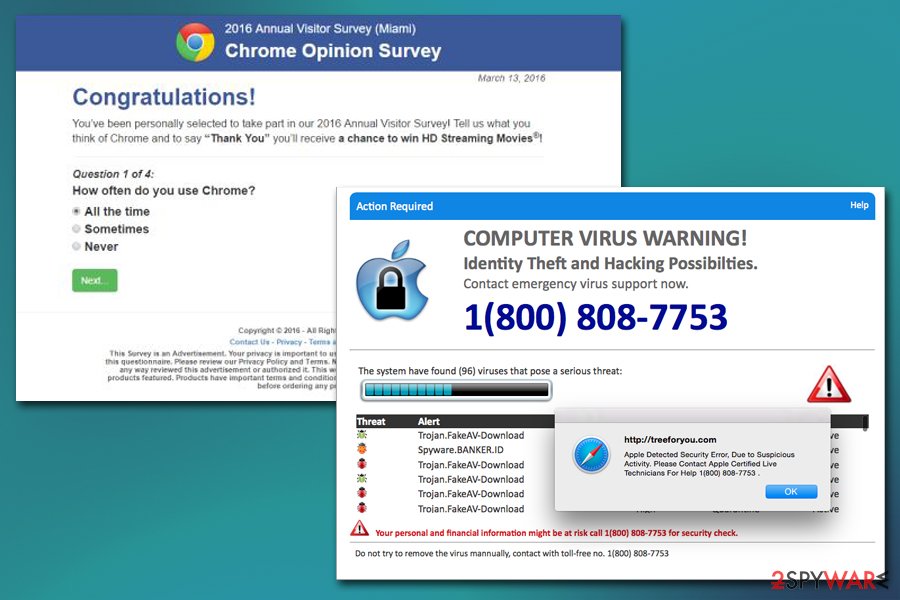 As we mentioned previously, Adware Helpers removal might not be as easy if the type of infection is malware – especially if it is a rootkit. If that is the case, this type of malware might be so persistent that even the re-installation of Windows would not help (some cases were observed where malware roots itself into the system's kernel[4] – the highest possible permission position). Luckily, such cases are rare, and most next-gen anti-malware programs are capable of dealing with rootkits, as well as other malicious applications.

If you so desire, you can also check our instructions below, and remove Adware Helpers manually. Note that it is only possible when the infection is minor, and no persistence modules were inserted by the infection – such PUPs can be uninstalled via the installed application list.

Once you eliminate Adware Helpers virus, you should also ensure to reset all the installed browsers to ensure intrusive advertisements do not come back.

Get rid of Adware Helpers from Windows systems

To get rid of Adware Helpers from Windows, follow these steps:

Once these steps are finished, Adware Helpers should be removed from your Microsoft Edge browser.

Resetting Mozilla Firefox will stop the unwanted ads from coming back:

Google Chrome reset will ensure that no intrusive ads are present during web browsing sessions:

Get rid of Adware Helpers from Safari

You can quickly scan the QR code with your mobile device and have Adware Helpers manual removal instructions right in your pocket.