Barack Obama Blackmail ransomware is a crypto-malware which targets to encrypt .exe files only 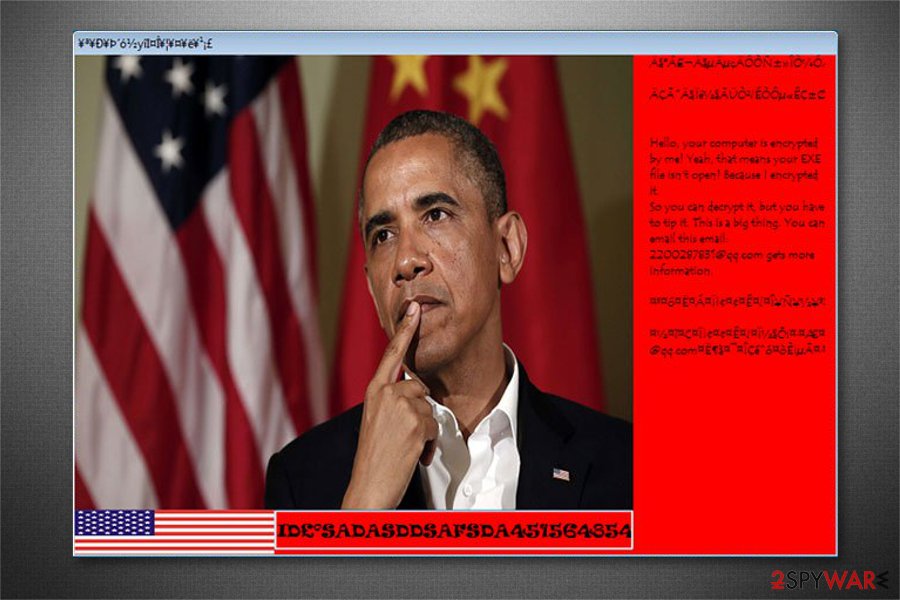 Barack Obama Blackmail ransomware is a new cyber threat which encrypts executable files on the targeted devices. Researchers note that this malware is also known as Barack Obama's Everlasting Blue Blackmail virus which opens a pop-up window as a ransom note once data encryption is finished. Victims are asked to pay the ransom and contact the attacker via 2200287831@qq.com email address for more information.

The ransom-demanding message is displayed as a pop-up window which includes the following information:

Hello. your computer is
encrypted by me! Yeah, that
means your EXE file isn’t open!
Because I encrypted it.
So you can decrypt it, but you
have to tip it. This is a big thing.
You can email this email:
2200287831@qq.com gets
more information.

Further analysis revealed that Barack Obama Blackmail ransomware is highly sophisticated as it is programmed to stop numerous processes which are related to antivirus tools. This file-encrypting virus executes the following commands to kill Kaspersky, McAfee, and Rising Antivirus tools:

However, you can use other security tools, like Reimage Reimage Cleaner Intego, to remove Barack Obama Blackmail ransomware and protect your computer. Note that you might need to boot your system into Safe Mode first. The instructions showing how to do so are appended at the end of this article. 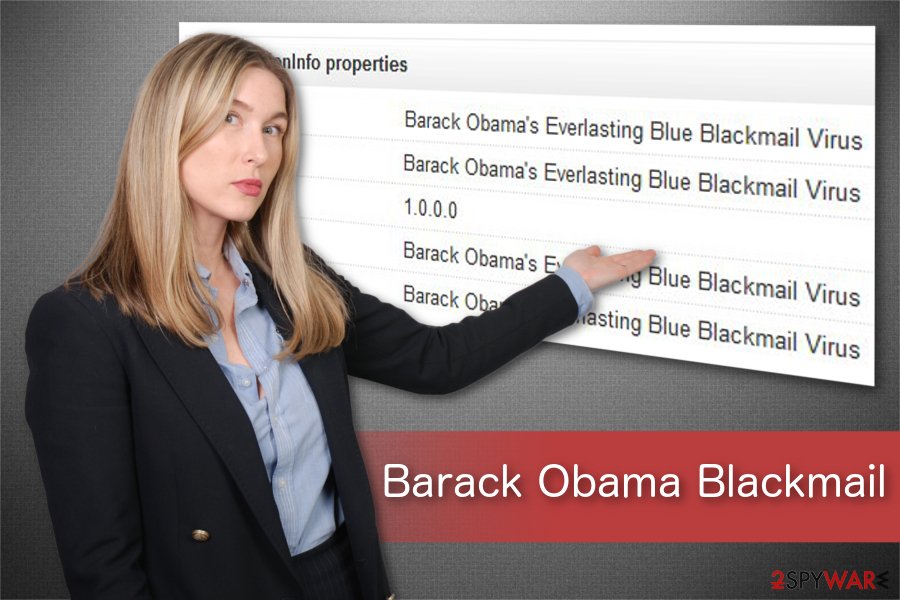 Barack Obama Blackmail is a ransomware which opens a pop-up ransom-demanding window and asks to contact the criminals via 2200287831@qq.com email address for more information.

After Barack Obama Blackmail removal you have several options to recover encrypted .exe files[2]. There are effective tools along with the guidelines showing how to decrypt information. Find them below this report. Otherwise, you can use backups to retrieve your data.

Ways to protect your computer against ransomware

Ransomware-type cyber threats travel inside malicious spam emails. The electronic letters might impersonate notifications from legitimate companies to trick people into installing file-encrypting viruses. Note that the malware can disguise as .pdf or .jpg attachment.

Once the malicious attachment is opened, the computer is infected with ransomware. Therefore, you should stay vigilant and carefully monitor your inbox for spam emails. You can search for any grammar mistakes or misspellings along with urges to click on suspicious links or attachments. These are one of the best indicators that you might be a target of ransomware.

Researchers also encourage users to stay away from ads and peer-to-peer (P2P) file-sharing sites. Some ads might be programmed to execute malicious scripts and automatically install malware as well. Therefore, you should use only safe websites and download programs from authorized developers.

Researchers[3] warn that regular computer users should never try to remove Barack Obama Blackmail ransomware on their own. There is a substantial risk that people might delete essential system files or kill fundamental processes and damage their computers permanently.

You should get a professional antivirus software to complete Barack Obama Blackmail removal properly. Our IT experts suggest using one of the following security tools and read the instructions below:

If you are unable to install an antivirus, reboot your computer into Safe Mode with Networking:

Guide which is presented above is supposed to help you remove Barack Obama Blackmail from your computer. To recover your encrypted files, we recommend using a detailed guide prepared by 2-spyware.com security experts.

If your files are encrypted by Barack Obama Blackmail, you can use several methods to restore them:

According to the experts, it is possible to use this software to get back encrypted .exe files by Barack Obama Blackmail ransomware. Follow the steps below:

Get help from ShadowExplorer tool

This software requires Shadow Volume Copies of the encoded files. If they are still in place, follow the instructions below:

Finally, you should always think about the protection of crypto-ransomwares. In order to protect your computer from Barack Obama Blackmail and other ransomwares, use a reputable anti-spyware, such as Reimage Reimage Cleaner Intego, SpyHunter 5Combo Cleaner or Malwarebytes

You can quickly scan the QR code with your mobile device and have Barack Obama Blackmail ransomware manual removal instructions right in your pocket.