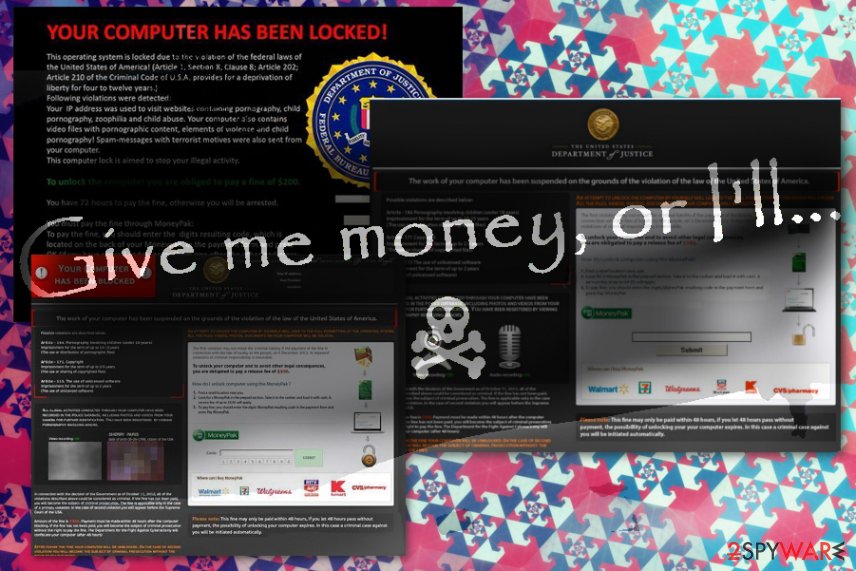 Department of Justice Virus is the ransomware that blocks you from accessing the computer until you pay the demanded amount. This so-called fine is demanded due to the violations because the alert states about the distribution of pornography, unlicensed software, copyrighted files. Of course, you did nothing like that and you shouldn't pay the ransom since there is no proof of these claims. Unfortunately, people still fall for this scam since it states that the Department of Justice is involved.

Questions about Department of Justice Virus

Department of Justice Virus is one of many similar threats that deliver scary messages to get profit. Nymaim virus, Politie virus, Metropolitan Police virus are all ransom-demanding threats based on messages from agencies of the government. All the types of such malware demand payments transferred via MoneyPak or Ukash services. The amount can differ, but it usually starts with $300 per victim. DO NOT consider paying the “fine” since it does not give any positive results fro the security of your device.[1]

Department of Justice Virus message claims that you viewed child pornography, obtained other illegal content or even distributed such material yourself. Those lock screen windows can also show that your machine got locked and your private information got recorded via the webcam and microphone. People get scared after such claims and pays the fine for the criminals to avoid any actions.

Unfortunately, victims of the Department of Justice Virus pays for nothing since these statements are fake. However, these people can capture and record footage of you from audio devices or the webcam, so the possibility of streaming your private videos and audio is truthful.

Nevertheless, if you react to these alerts and messages, you can get rid of the Department of Justice Virus and avoid further damage. When the threat locks you out of the applications and the system in general, it seems to be impossible, but we have a few methods below the article to help you. One of them is rebooting the machine in Safe Mode.

This is one of the threats from Ukash virus group that try to attack people living in the United States of America. This threat belongs to the category of ransomware, so it is designed to get inside the system secretly and then try to rip users off. Just like other crypto-malware, it creates lots of troubles for its victims by locking the system down. This results in a complete system's take over – the user becomes incapable to get on the Internet, launch legitimate anti-malware programs or do other things on the PC. 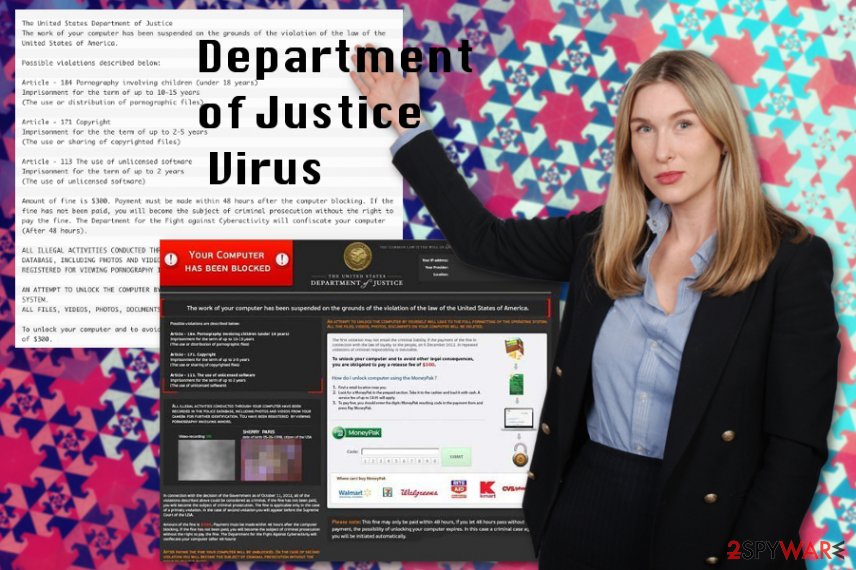 Department of Justice virus is the screen-locking threat that asks the user to pay at least $300 to keep access to his or her computer.

This scam is designed to use the same ways of intrusion as all previous Ukash viruses: it uses spam emails, freeware, shareware, and other sources to come inside undetected. Once there, it locks the system down and shows its only message, claiming that the Windows system has been blocked because you have been using copyrighted content, visiting pornographic websites or even spreading malware.

For that, now you have to make a payment of $300 using the Moneypak prepayment system. Here's how this message looks like:

Your computer has been locked!
This operating system is locked due to the violation of the federal laws of the United States of America (Article: 1, Section 8, Clause 8; Article 202; Article 2012 of the criminal code of the U.S.A. Provides for the deprivation of liberty for four to twelve years.)
Following violations detected:
Your IP address was used to visit websites containing pornopraphy, child pornography, zoophillia and child abuse. Your computer also contains video files with pornographic content, elements of violence and child pornography!
(…)
You have 72 hours to pay the fine, otherwise you will be arrested.
(…)

No matter how trustworthy it seems, you must ignore this alert because it has nothing to do with the Department of Justice. If you pay this $100 or $300 fine, you won't have your computer unlocked and you will lose your money as well. In order to avoid that, you should focus on Department of Justice Virus removal as soon as possible. 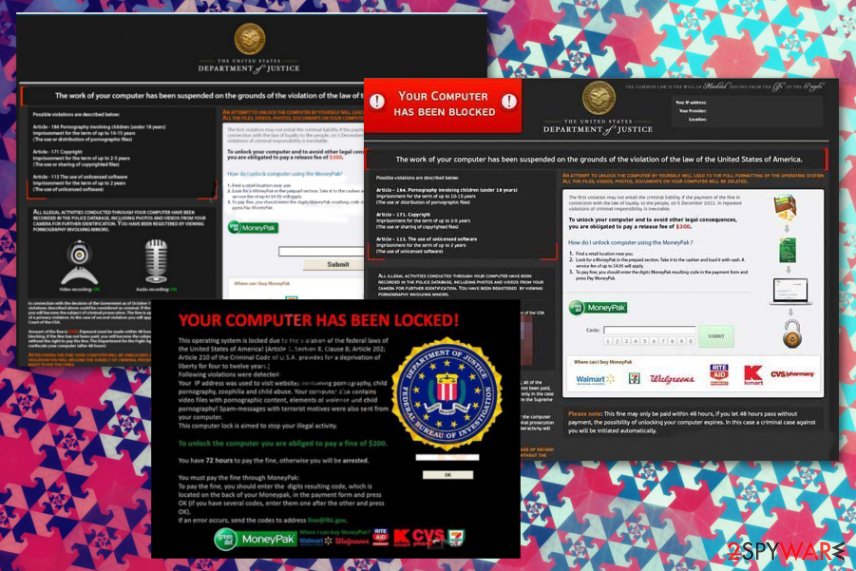 Department of Justice virus is the malware that shows various windows with demanding messages that are focused on crypto-currency extortion or monetary gain in general.

Possible ways to get malware on the machine

The threat that locks the screen immediately with fake alerts or messages stating about illegal activities can get on the machine without your permission, so there is no way to stop the infiltration while it happens. Especially when there is no need for your permission.

Ransomware threats come to the targeted computer via spam emails, other similar campaigns and with the help of malicious macros and infected files, the payload gets dropped directly on the network.[3] From there the attack goes to the second stage – extortion and scary message delivery.

In most cases, you just need to download and open the attached file on your system. Then malicious script either delivers you malware designed to spread ransomware or directly launches the money-extortion based virus. You can avoid these infiltrations if you pay attention to received emails and try to delete them before opening on the PC. This is what experts[4] always recommend.

In order to remove Department of Justice virus, you should try following the information below. It includes a few methods that MAY work in this virus removal. Remember that manual removal method can be used only if you have enough knowledge about the computer's system and its architecture

In other cases, Department of Justice virus removal can be performed with anti-malware tools like Reimage Reimage Cleaner , SpyHunter 5Combo Cleaner, or Malwarebytes. These automatic virus termination tools help to eliminate all files, programs related to this threat and the ransomware itself. Make sure to pay attention and possibly run a system scan more than once to ensure the proper cleaning.

To remove Department of Justice virus, follow these steps:

Use System Restore as an alternate method of the virus removal

Finally, you should always think about the protection of crypto-ransomwares. In order to protect your computer from Department of Justice and other ransomwares, use a reputable anti-spyware, such as Reimage Reimage Cleaner , SpyHunter 5Combo Cleaner or Malwarebytes

Your opinion regarding Department of Justice Virus Cancel reply

You can quickly scan the QR code with your mobile device and have Department of Justice Virus manual removal instructions right in your pocket.