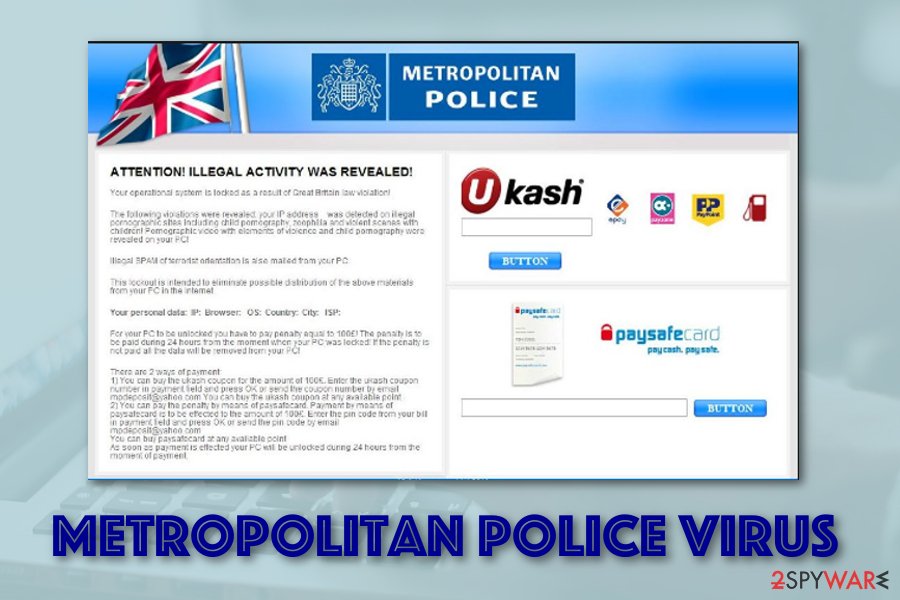 Metropolitan Police virus, also known as “Metropolitan Police – your computer was locked to stop your illegal activity!” is a computer-locking scam that launches attempts on people from the UK. This malware drops a scamming message that claims about a lock screen that is a result of some type of illegal tasks performed. As a way to restore your computer back to its previous states, victims are urged to pay a ransom of £100 via Ukash or Paysafecard[1] for ensuring anonymity.

Be aware of Metropolitan Police scam as it claims false things for monetary benefits. You can encounter this type of scam on third-party websites or it can be brought to your computer system as a sign of an adware infection. However, you should not believe in these claims at any point of view. Scammers have been doing a great job of convincing gullible people here.

Metropolitan Police virus states that your IP address has been found linked to adult-themed networks that included illegal content of young children in particular violence scenes and even zoophilia. As a result of this, a penalty of £100 needs to be transferred in the time period of 24 hours. If the fine is not paid, crooks threaten with permanent data loss.

“Metropolitan Police – your computer was locked to stop your illegal activity!” is a scam that offers to pay the fake fine in two different methods both of which ensure the anonymity of the transaction. This way hackers can continue with scamming purposes and be capable of attacking even a bigger number of users. 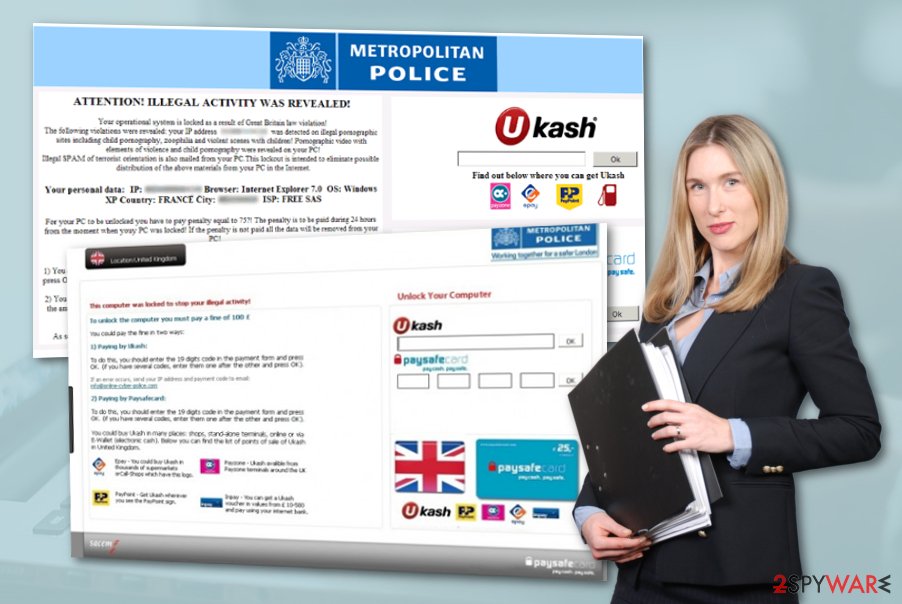 Note that having Metropolitan Police virus on your computer and following its commands might be dangerous. Not only that you are at big risk of monetary losses but this scam can also result in the secret installation of malware. It might carry a Trojan virus in some type of location, e.g. hyperlink or third-party advertisement.

The best thing to do is to remove Metropolitan Police virus from your machine and the object that has been forcing its appearance. Our recommendation would be to get anti-malware such as ReimageIntego to help you out. This software will scan the entire computer system and locate any potentially suspicious or dangerous objects.

However, if you think that some type of threat might be located on your computer and causing more trouble than just the appearance of the scam before you take care of Metropolitan Police virus removal, you should look at the end of the article and launch your computer in different boot options for disabling any types of malicious processes.

A computer user has reported to a Norton by Symantec forum that he encountered that he has been encountering the Metropolitan Police virus scamming message within each computer boot. Gladly, rebooting the system in System Restore appeared to be a helpful thing for him.[2]

The delivering process of scams

According to experts from Virusai.lt,[3] scam messages can appear occasionally on third-party websites, for example, piracy networks, adult-themed pages, gambling sites, and similar. If a scam occurs on this type of source, what you have to do is close the website (if possible). If not, reboot to Safe Mode and run an anti-malware scan to ensure that no malware was injected while you were dealing with the scam message.

Additionally, the forced appearance of scams can be caused by some type of potential threat that has been injected into the computer system. This can be any type of potentially unwanted programs, for example, adware, browser hijacker, etc. Furthermore, some other scamming messages are commonly delivered via email spam campaigns and target users straight from their inbox by providing them with false information.

If you have been dealing with this annoying scam lately, you should remove Metropolitan Police virus from your computer system without any hesitation. Use reliable anti-malware such as ReimageIntego, SpyHunter 5Combo Cleaner, or Malwarebytes to search the entire machine for possible malware strings.

Once this software detects “Metropolitan Police – your computer was locked to stop your illegal activity!”, you need to make sure that no additional components have come together with this scam. As we have already mentioned, the scamming message might bring dangerous threats straight to the system.

For this not to happen, you need to deal with Metropolitan Police virus removal on time. Besides, you can take a look at the below-provided system boot options that will allow you to disable all suspicious processes on your computer.

Use Safe Mode with Networking to deactivate all malicious activities that might have been going on lately:

Boot your computer to System Restore and disable the malware. Activate this mode with the help of these guidelines:

Finally, you should always think about the protection of crypto-ransomwares. In order to protect your computer from Metropolitan Police and other ransomwares, use a reputable anti-spyware, such as ReimageIntego, SpyHunter 5Combo Cleaner or Malwarebytes

You can quickly scan the QR code with your mobile device and have Metropolitan Police virus manual removal instructions right in your pocket.