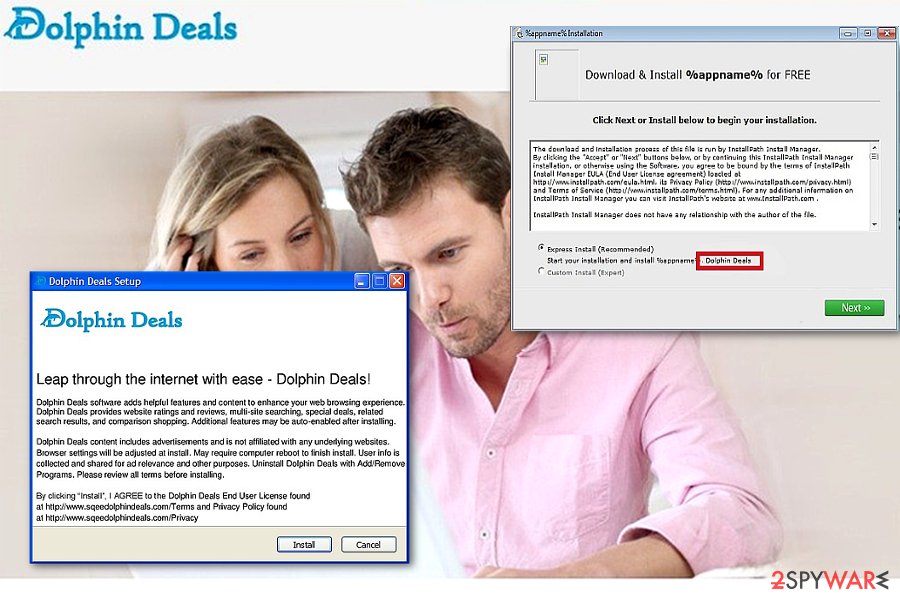 Dolphin Deals, released by SuperWeb LLC, functions as an adware-type[1] program which can significantly diminish your browsing quality. Due to certain peculiarities such as deceptive distribution techniques, some might treat this PUP as a virus. We have made some investigation on this particular app and discovered that it might provide “RocketTab powered by Dolphin Deals“ named ads that shows possible relations with another adware app named Rocket Tab.

Dolphin Deals adware is a program that should raise your concerns after installation. You might find your web browsers modified in some particular ways. PUPs are able to change the default homepage and new tab URL bar.

Dolphin Deals adware does not hold a very high danger level as it technically is not malware. However, this does not mean that the PUP should be ignored and kept on the affected system for a long period of time as it can:

The majority of digital shopping assistants also tend to share the collected information with third parties, which again results in another stream of Dolphin Deals ads or the commercial offers of sponsored domains. Developers aim to record your browsing habits, experience, and history that allows them to produce a bigger number of targeted adverts.

These pop-up alerts are not only an annoyance, but they leave a negative impact on your browser's capabilities to process information and load new tabs fastly. Dolphin Deals might try to execute enormous loads of adverts throughout a very short period of time that might relate to decreased browsing quality and even high CPU usage. 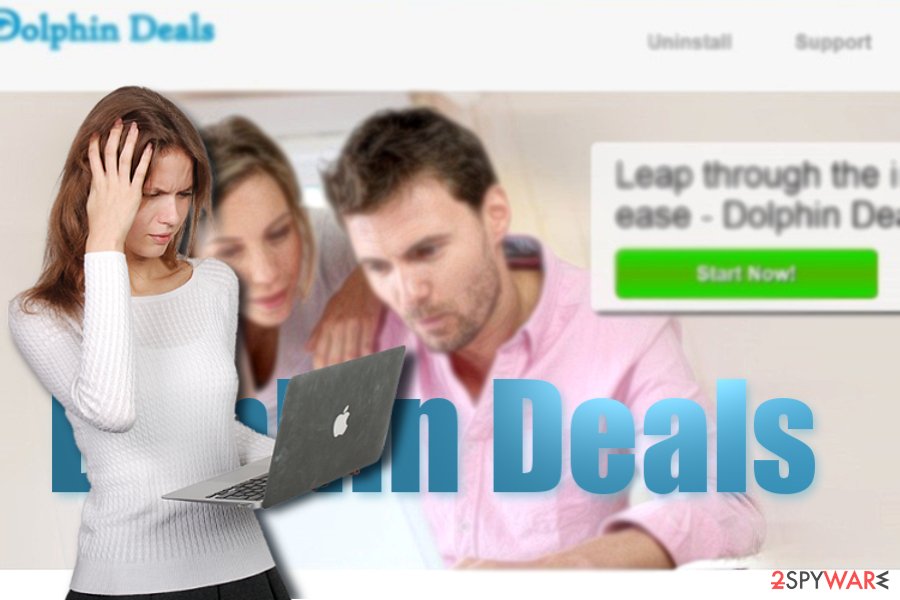 Dolphin Deals tended to attach itself to highly dubious applications.

The only way to prevent this from happening is to remove Dolphin Deals from your computer system and web browser apps such as Chrome, Explorer, Firefox, Safari, etc. Note that the adware might inject BHOs[2] such as extensions, add-ons, and plug-ins that also need to be terminated for a full removal process.

You can complete Dolphin Deals removal by leaning on automatical or manual technique. If you choose the second method, you will have to put some effort of your own. However, if you find this method too challenging, you can always download a program that will complete the entire task for you.

Also, Dolphin Deals virus might leave some compromised system components such as files, entries, and similar. If you find some content that needs fixing, you can try repairing it with a system tool such as Reimage Reimage Cleaner Intego. However, feel free to use any type of program if you think that it will suit your needs better.

Dolphin Deals adware was active a few years ago, though even now some users spotted it on the cyberspace. Now its official domain is not available anymore. Previously, users may have downloaded its browser extension and installed it as independent software. Due to these peculiarities, it was able to spy on users' browsing habits more efficiently.

Even if you were fine with the lack of privacy, its distribution model is what alarms IT experts. Dolphin Deals was spotted traveling along with shady applications. Considering the fact that it clings to fishy applications, it is not surprising if you get misguided to poorly secured partner websites with weak SSL certificates. Adware programs are becoming a more popular tool among hackers.[3] 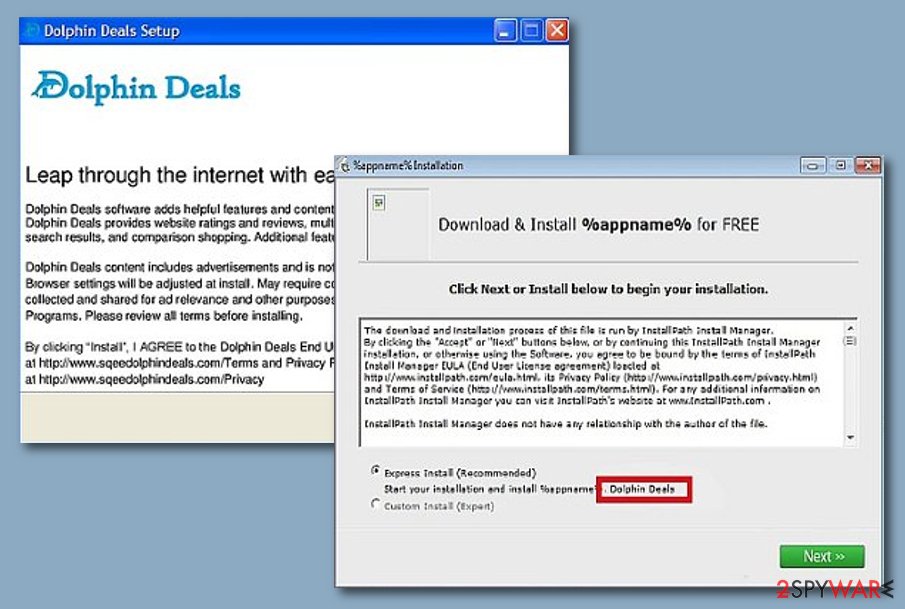 PUPs attempt to slip along with another program

The majority of adware programs have official download websites. Enthusiastic online shoppers are likely to have installed this app. Alternatively, the adware might also enter the operating system if you accidentally install it with another free program. This might happen if you like downloading software from websites such as download.com, softonic.com, cnet.com, and soft32.com.

Also, you have a bigger risk of receiving adware within your installations if you use the Quick or Recommended configuration instead of the Custom or Advanced one. The previous mode allows users to take full control of all incoming objects and opt-out products that give a concerning look to them. This way people can be sure that no questionable app will slip into the system without their own notice.

Continuously, adware programs sometimes pretend to be suspicious software updates (JavaScript, Flash Player). If you are looking forward to updating some apps on your computer, go to the official website and check out all newly-released upgrades there. Additionally, do not be afraid to invest in a reliable antivirus program that will drop alerts if you encounter something suspicious/malicious during your online sessions.

If you now are convinced to remove Dolphin Deals, you may eliminate it manually or automatically. Install an anti-spyware program and let it do the job for you. You can also download some system repair software and try to repair compromised entries or files. It is also highly important to clean the browser from its tracking cookies.

In order to do that, below manual Dolphin Deals removal guidelines might be of service to you. Browser reset is a faster solution. Proceed to the guidelines carefully. The extension is compatible with all main browser types, but it mainly targetted Chrome and IE users. It was highly spread in France[4] too.

To clean your Windows computer from adware and unwanted content, employ the following steps

To erase BHOs from Internet Explorer, you have to follow the below-provided guide

To ensure the stability of your MS Edge browser, use the below-provided instructions

Once these steps are finished, Dolphin Deals should be removed from your Microsoft Edge browser.

Get rid of Dolphin Deals from Google Chrome

To reverse Google Chrome back to its previous state, carry out the following tasks

You can quickly scan the QR code with your mobile device and have Dolphin Deals Ads manual removal instructions right in your pocket.