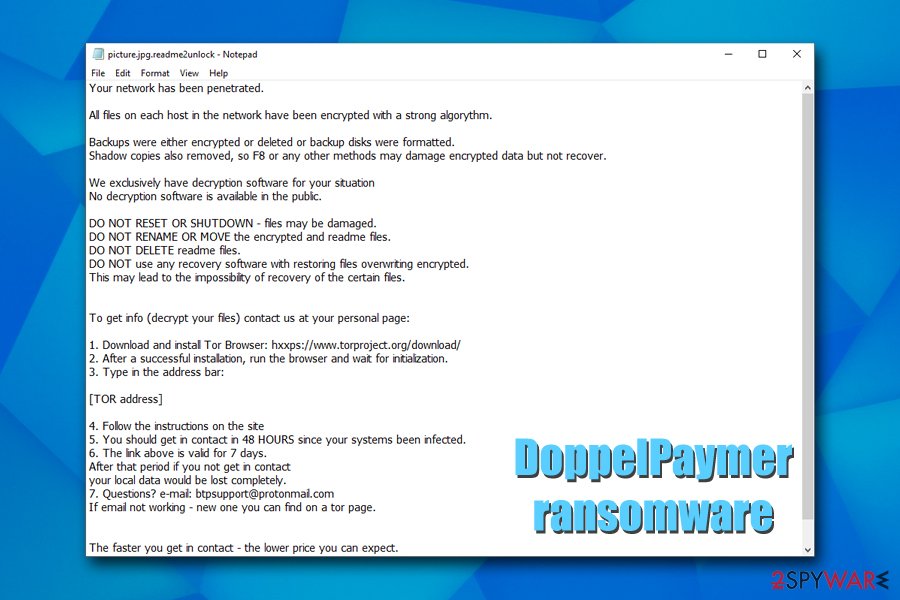 DoppelPaymer ransomware is a file locking virus that derived from a well-known BitPaymer, which was previously used in various high-profile targeted attacks

DoppelPaymer is ransomware-type of computer infection that stems from another file-locking malware that first emerged in August 2017 – BitPaymer. This ransomware strain was developed and distributed by the INDRIK SPIDER cybercriminal group, which was famous for first using the infamous Dridex banking Trojan in its Big Game Hunting[1] attacks against such targets like Chilean Ministry of Agriculture, Texas, and City of Edcouch.[2]

In July 2019, researchers at CrowdStrike spotted a new variant which they dubbed DoppelPaymer ransomware – it was possessed multiple similarities with its predecessor. According to Croudstrike experts' findings,[3] they believe that the developer of BitPaymer left the cybercriminal gang and started distributing its own version of the malware – DoppelPaymer.

The actor uses targeted attacks to infect companies from various industries and infect full networks and all the connected drives. DoppelPaymer ransomware uses the RSA-2048 and AES-256 encryption algorithm[4] to encrypt data on the infected machine and appends .locked extension to each of the files. Additionally, every modified file also receives a separate ransom note, which goes by the name [filename].[file extension].readme2unlock.txt.

DoppelPaymer was released with multiple improvements over BitPaymer

Since its update from the BitPaymer, the DoppelPaymer virus has received several updates to increase the persistence and evasion of the computer threat. One of the main changes was made to the ransomware source code, which allows it to perform file encryption process at a much faster rate – it increases the chances of all or most files being encrypted before the machine operator can interrupt the process.

Additionally, DoppelPaymer ransomware crashes if some of the required conditions are not met – researchers believe that the process was programmed so that automatic sandbox[5] analyzing would be avoided. Finally, the malware also kills several processes and services once it gets executed in order to prevent termination of the encryption process of the data.

However, instead of using service names, DoppelPaymer ransomware utilizes lists of CRC32 checksums, which prevents security researchers from performing reverse-engineering techniques. The malware incorporates the ProessHacker with custom DLL (a legitimate open-source administrative utility tool) as well as a kernel driver, which consequently allows the shut down of the predetermined services and processes.

Croudstrike researchers wrote the following in their report:[3]

Both BitPaymer and DoppelPaymer continue to be operated in parallel and new victims of both ransomware families have been identified in June and July 2019. The parallel operations, coupled with the significant code overlap between BitPaymer and DoppelPaymer, indicate not only a fork of the BitPaymer code base, but an entirely separate operation. This may suggest that the threat actor who is operating DoppelPaymer has splintered from INDRIK SPIDER and is now using the forked code to run their own Big Game Hunting ransomware operations.

Due to these modifications, DoppelPaymer ransomware removal might become complicated. Nevertheless, accessing Safe Mode with Networking and running a full system scan with the most recently-updated security software should do the job. 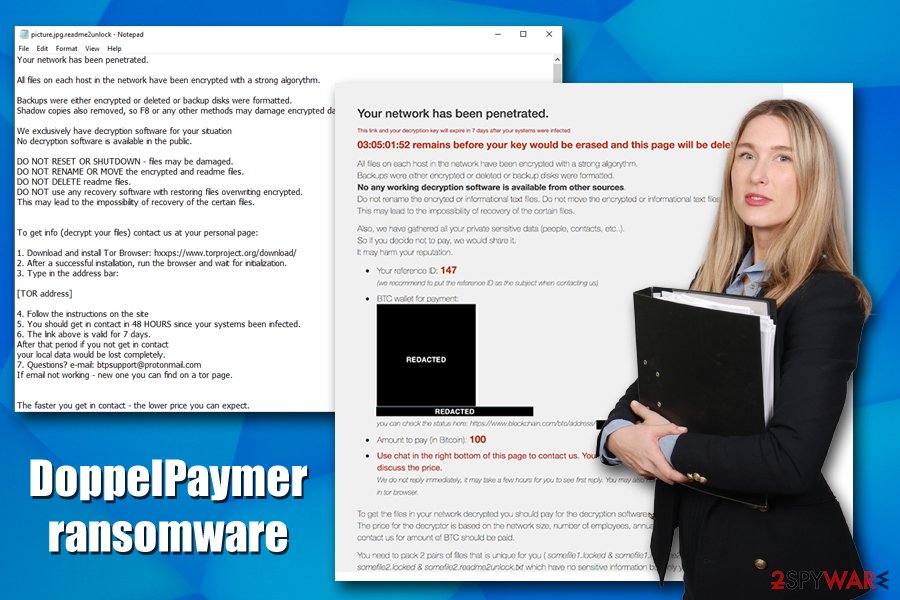 DoppelPaymer is a ransomware virus thap appends .locked extension to each of the files and then demands ransom to be paid for data decryption

DoppelPaymer ransomware does not provide the ransom amount

Upon infiltration and the necessary system modifications such as loading of several modules, DoppelPaymer ransomware begins the encryption process of databases, documents, pictures, and all the other relevant files that are stored on corporate computers. After encryption, each of the affected files receives .locked marking – for an example, a picture.jpg is transformed into picture.jpg.locked and is no longer accessible. Note, .locked extension has been used by several other ransomware strains, including Unlock92 and Luxnut.

Once the data encryption process is complete, DoppelPaymer creates a multitude of ransom notes (one per file) and places them into the same folder. All the notes are identical, and state the following:

Your network has been penetrated.

All files on each host in the network have been encrypted with a strong algorythm.

Backups were either encrypted or deleted or backup disks were formatted.
Shadow copies also removed, so F8 or any other methods may damage encrypted data but not recover.

To get info (decrypt your files) contact us at your personal page:

1. Download and install Tor Browser: hxxps://www.torproject.org/download/
2. After a successful installation, run the browser and wait for initialization.
3. Type in the address bar:

4. Follow the instructions on the site
5. You should get in contact in 48 HOURS since your systems been infected.
6. The link above is valid for 7 days.
After that period if you not get in contact
your local data would be lost completely.
7. Questions? e-mail: btpsupport@protonmail.com
If email not working – new one you can find on a tor page.

The faster you get in contact – the lower price you can expect.

Crooks behind the DoppelPaymer virus claim that rebooting the system or using a recovery program can damage the encrypted files. Because data corruption can indeed happen when trying such actions, experts highly advise to backup all the encrypted files before proceeding with file recovery. Nevertheless, victims should first remove DoppelPaymer ransomware with the help of powerful anti-malware software in Safe Mode with Networking – we provide the instructions below. We also recommend using Reimage Reimage Cleaner Intego to repair the corrupted system files and ensure normal PC operation.

Once DoppelPaymer is deleted, users can attempt to retrieve files with recovery software or by using automated Windows backups, although both methods might not bring any positive results. Nevertheless, paying cybercriminals the high amount of ransom (they might ask for 2 BTC, 40 BTC, or 100 BTC) might be extremely risky due to the shady business model. After all, cybercriminals are engaging in illegal activity, so trusting them is not recommended. 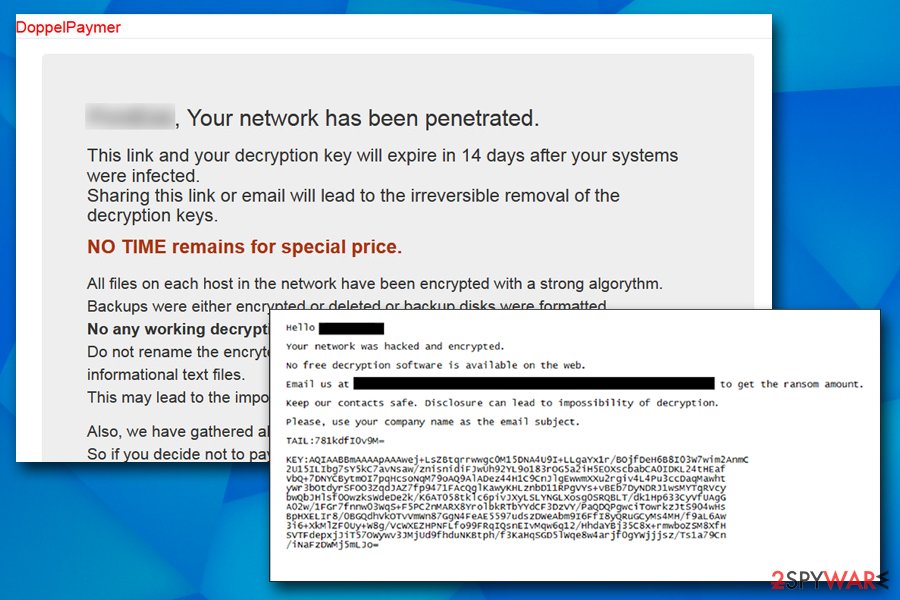 DoppelPaymer ransomware drops a .txt ransom note that later directs users to Tor page - they can communicate with the attackers via the online chat there

To avoid ransomware infiltration in organizations, it is important to train the employees about cybersecurity, employing complicated passwords with the two-factor authentication feature, keeping all the operating systems and the installed software updated, as well using cybersecurity solutions that would be able to detect and stop the incoming payloads.

DoppelPaymer virus is a modular threat, and its developers are known to be the same individuals who created Dridex Trojan and were also affiliated to GameOver gang[6] – Zeus criminal network. Therefore, there is a chance that, besides the ransomware, there might be other payloads present on the infected network or the machine. For that reason, DoppelPaymer ransomware removal is mandatory. Nevertheless, the backups of each of the files should be performed, as the process of malware elimination or even system reboot might corrupt all the encrypted data, and it might not be recoverable at all.

To remove DoppelPaymer ransomware, users should access Safe Mode with Networking, as explained below, and perform a full system scan. Advanced security solutions should be able to find all the malicious components of malware along with any secondary payloads that might be present on the device/network.

Additionally, we also recommend contacting the local authorities and report the cybercriminal incident. For further information and DoppelPaymer decryptor software that might emerge in the future, visit the following websites:

get rid of the DoppelPaymer ransomware by accessing Safe Mode with Networking – it would temporarily disable ransomware operation:

System Restore might also be useful when trying to eliminate ransomware:

Guide which is presented above is supposed to help you remove DoppelPaymer from your computer. To recover your encrypted files, we recommend using a detailed guide prepared by 2-spyware.com security experts.

If your files are encrypted by DoppelPaymer, you can use several methods to restore them:

Data Recovery Pro cannot decipher files. However, it might be able to access copies of the working files from the hard drive and restore them from there.

This method can only be used if you implemented System Restore function before the infection.

In some cases, ShadowExpolorer might retrieve all .locked files

In case DoppelPaymer failed to remove Shadow Volume Copies, your best bet is using ShadowExplorer to recover the data.

No decryptor is currently available

Finally, you should always think about the protection of crypto-ransomwares. In order to protect your computer from DoppelPaymer and other ransomwares, use a reputable anti-spyware, such as Reimage Reimage Cleaner Intego, SpyHunter 5Combo Cleaner or Malwarebytes

You can quickly scan the QR code with your mobile device and have DoppelPaymer ransomware manual removal instructions right in your pocket.