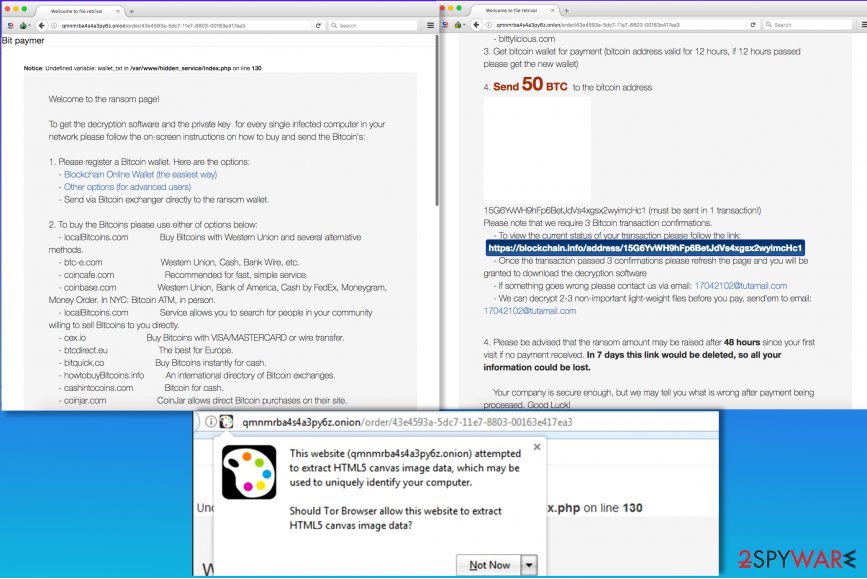 BitPaymer ransomware is a crypto-malware which uses RC4 and RSA 1024 ciphers to encrypt information on the computers. Researchers have first discovered this file-encrypting virus in July 2017 operating under the name of FriedEx. Although, BitPaymer continues to attack computers in 2018 and even expanded its targets to large-scale organizations, like hospitals and government entities. The compromised data is marked with .locked file extension which remained the same even when the malware was updated. However, developers include different ransom notes and contact details with every new variant of BitPaymer.

Bitpaymer virus has been created by the same group of hackers who are responsible for Dridex banking trojan. However, this time cyber criminals aimed at Scottish hospitals.[1] Fortunately, it did not manage to cause huge damage. However, it asked to pay 50 Bitcoins for data recovery. 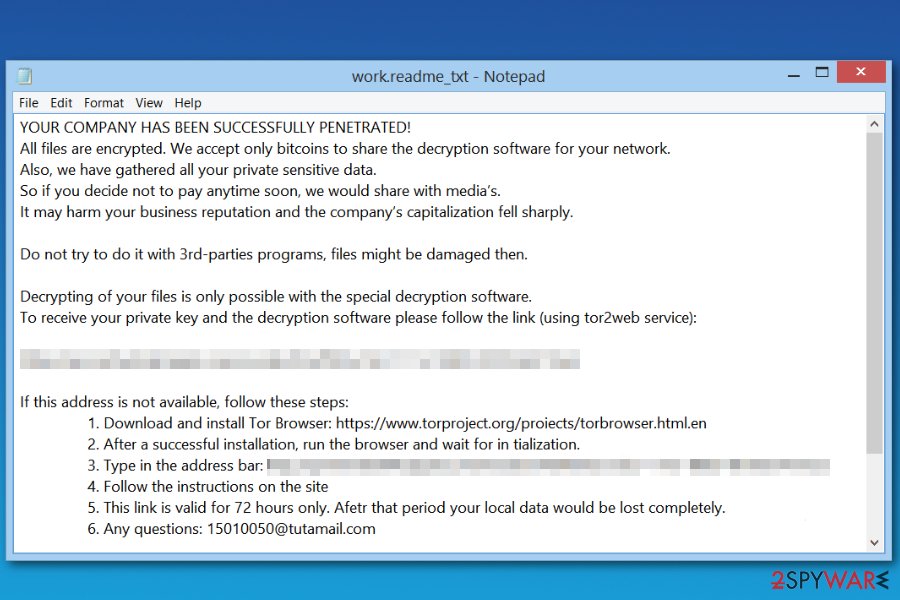 BitPaymer is a ransomware-type infection which appends .locked extension after file encryption.

The virus has been updated a several times. However, nothing in ransomware's operation has been changed. The only major difference is used different Bitcoin wallet address (for ransom payments) and used contact email address. Currently, researchers detected three of them. However, there might be a bunch of different ones too:

The payment is only accepted in Bitcoins, which is the favorite cryptocurrency used in many illegal operations[2]. The payment system itself is legitimate; however, cyber criminals tend to use it to become anonymous and untrackable. But in a case of a ransomware attack[3], an immediate Bitpaymer removal is required to protect your PC from further malware attacks.

The Bitpaymer ransomware suggests installing Tor browser in order to access a particular ransom payment website. The payment website has no shame to ask the victim to pay 50 Bitcoins, which is an incredibly large sum of money – approximately 230,000 US dollars. We doubt that the Bitcoin wallet provided on that website will ever receive any payments from ransomware victims because such amount is simply unreasonable. 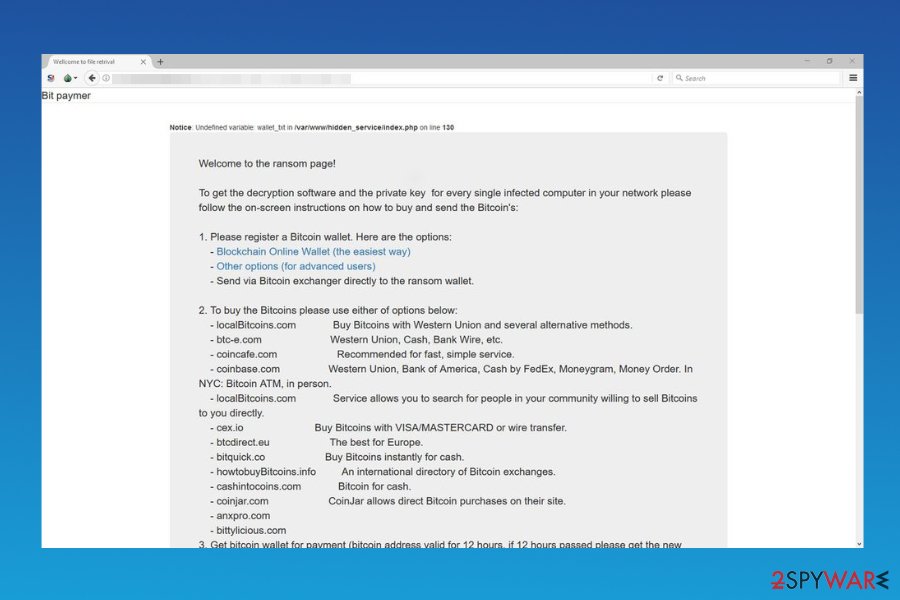 The main targets of BitPaymer malware are hospitals or government entities.

Speaking of alternative data recovery methods than paying the excessive ransom, there are some tools that you can try out. We have described possible data recovery techniques below this article. However, before taking any actions to recover your files, remove Bitpaymer virus first. To complete this task, we highly recommend using security programs such as Reimage Reimage Cleaner Intego that can eliminate spyware and malware from your PC.

If your files were encrypted by Bit Paymer, we hope that you had a data backup. It is the most efficient way of restoring files; however, not many ransomware victims have it. In case you’re reading this article because you want to find out more about the latest ransomware viruses, we strongly recommend you to create a data backup. For more security-related tips, visit NoVirus.uk site[4]. 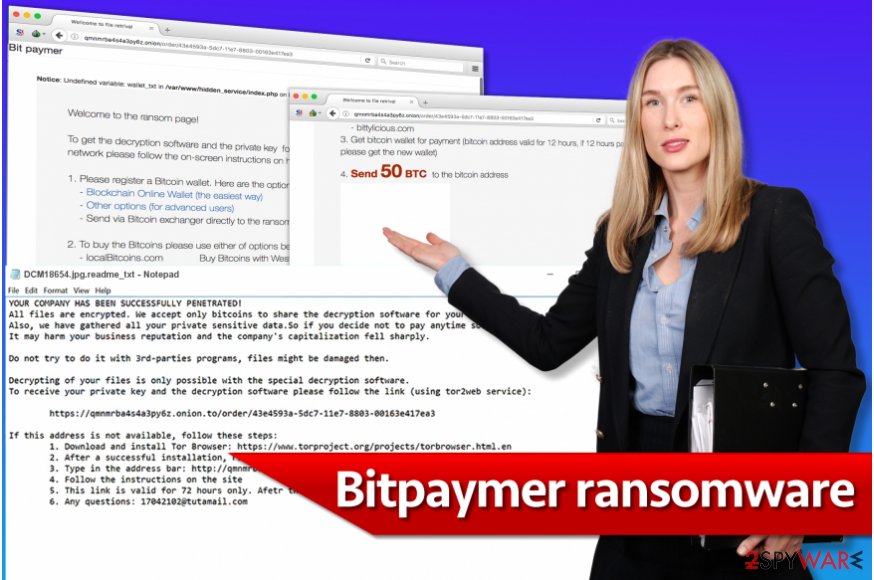 BitPaymer is a crypto-malware which uses RC4 and RSA 1024 algorithms for data encryption.

The PGA of America was possibly infected with Bitpaymer

Previously, the main targets of BitPaymer malware were hospitals and government entities. However, now the developers of this dangerous cyber threat decided to attack the PGA of America by hijacking the network. The staff identified the ransomware attack only on Tuesday morning when they started receiving ransom notes on each affected computer.

Just like SamSam ransomware, BitPaymer uses RDP Brute Force attacks to infect the network. After the attack, malware drops a ransom note where criminals inform about a penetrated network and ask to contact them via email:

Your network has been penetrated
All files on each host in the network have been encrypted with strong algorithm.
Backups were either encrypted or deleted or backup disks were formatted.
No free decryption software is available in the public.

Additionally, crooks threaten not to rename or move encrypted files. According to them, this may cause more damage and files might be lost forever. However, it’s just a psychological terror and attempts to gain more money from unsuspecting computer users. 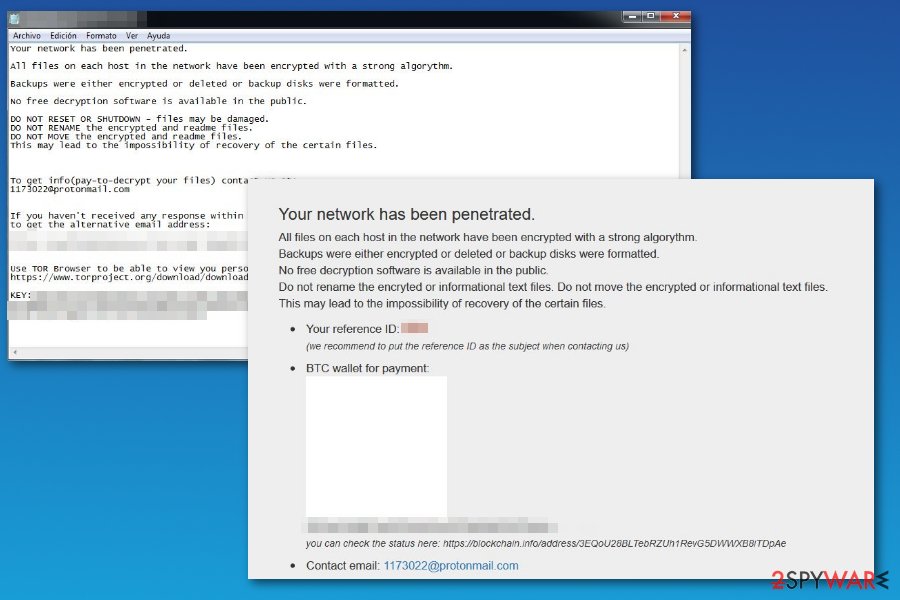 BitPaymer virus offers free decryption of 2 files to ensure that the decryption is possible.

According to the research conducted in May, experts have identified other BitPaymer RDP attacks which left ClaudiaBarnengham@protonmail.com and 1173022@protonmail.com email addresses for contact purposes. However, other major changes were not noticed.

Similarities between BitPaymer and Dridex malware

The analysis of malicious software codes allowed to confirm that both viruses are created by the same developers. It means that criminals are ambitious and willing to commit more cyber crimes. Instead of continuing updating banking trojan, they are also taking advantage of the most popular cyber crime – ransomware business.

Developers managed to create one of the most dangerous banking trojans. Thus, they are expected to update Bitpaymer and find new ways to make another hazardous crypto-malware soon.

Hospitals were one of the main targets of the crypto-malware

BitPaymer ransomware was undeniably active during the end of August. Researchers note that this file-encrypting virus managed to attack even three hospitals at National Health Service’s (NHS) Lanarkshire outpost. According to the sources, developers demanded to pay 53 Bitcoins (approximately 190 000 British Pounds at the current exchange rate) for BitPaymer decrypt software. 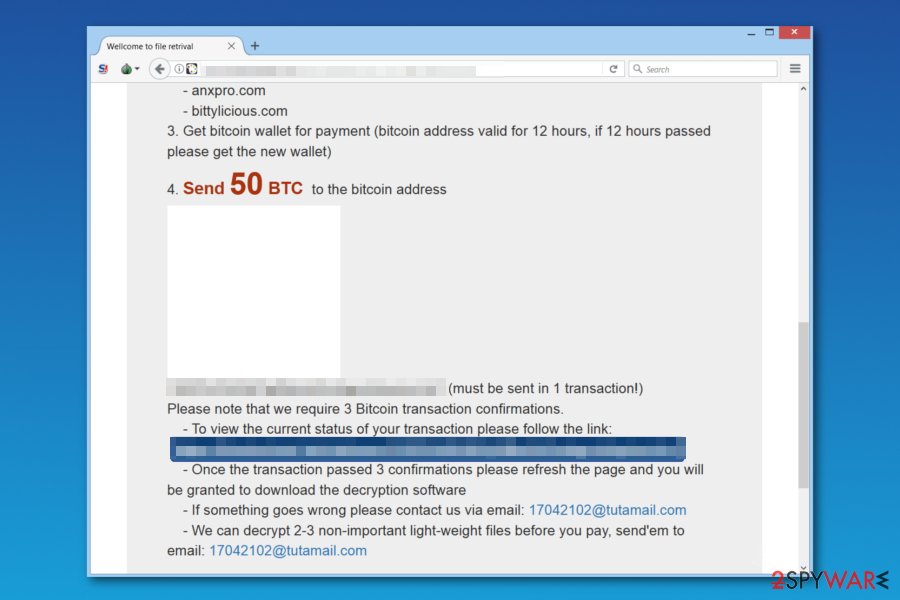 NHS Lanarkshire reported[6] about the issue and shared the news that hospitals’ security and IT systems were under control. Ransomware affected phone and staff rostering system mostly. Therefore, the attack disturbed hospitals’ work. They had to postpone surgeries and cancel people appointments.

It’s unknown how Bit Paymer launched the attack. It is suspected that malware may have launched RDP brute-force attack. Security experts continue investigating this issue.

The peculiarities of BitPaymer RDP attacks

Usually, ransomware spreads via spam emails, exploit kits, or with the help of Trojans. Although, BitPaymer ransomware uses RDP Brute Force attacks to infect large networks and extort money from organizations or companies. There are several tips to help you protect your computer or even business from ransomware attacks.

First of all, we highly recommend that you secure your computer with anti-malware software to ward off malicious software. Then, you should create a data backup. Create copies of the most important files and transfer them to an external data storage device, such as hard drive or USB. Keep it away from the computer and use when needed only.

Finally, we suggest keeping all of your programs up-to-date. In other words, whenever your computer suggests you to install an update to programs that you already have, agree to do it. You can also enable automatic updates and save yourself some time. Please remember that you should never decide to install software updates presented by suspicious Internet sites – these can land some spyware/malware programs on your PC.

Those who are infected with this sophisticated cyber threat should do not hesitate and take action immediately. The most convenient way to remove BitPaymer is running a full system scan with a professional security tool, like Reimage Reimage Cleaner Intego, SpyHunter 5Combo Cleaner, or Malwarebytes. Although, in some cases malware might block all antivirus programs. Thus, reboot your computer into Safe Mode with networking as shown below.

Do not try to perform a manual Bitpaymer removal. It can only be completed by experienced IT professionals that have experience in dealing with malware like ransomware. Attempts to uninstall ransomware can result in failure and cause you a lot of problems.

Delete the ransomware using the anti-spyware or anti-malware software. If you do not have it yet, install it after rebooting your PC into Safe Mode with Networking. This mode should always be used when dealing with malware – it helps to temporarily disable the virus and clean up the computer system efficiently.

Guide which is presented above is supposed to help you remove Bitpaymer from your computer. To recover your encrypted files, we recommend using a detailed guide prepared by 2-spyware.com security experts.

Data backup clearly is the best tool when it comes to data recovery. If you haven't created it in the past, it will be quite hard to recover your files now. However, we suggest trying one of the provided methods to restore some of your files.

If your files are encrypted by Bitpaymer, you can use several methods to restore them:

Data Recovery Pro can help you to restore your files easily. Although it might not be able to break the encryption of Bitpaymer ransomware, it might successfully recover some of your files. This is how you should use this tool:

Finally, you should always think about the protection of crypto-ransomwares. In order to protect your computer from Bitpaymer and other ransomwares, use a reputable anti-spyware, such as Reimage Reimage Cleaner Intego, SpyHunter 5Combo Cleaner or Malwarebytes

You can quickly scan the QR code with your mobile device and have Bitpaymer ransomware virus manual removal instructions right in your pocket.