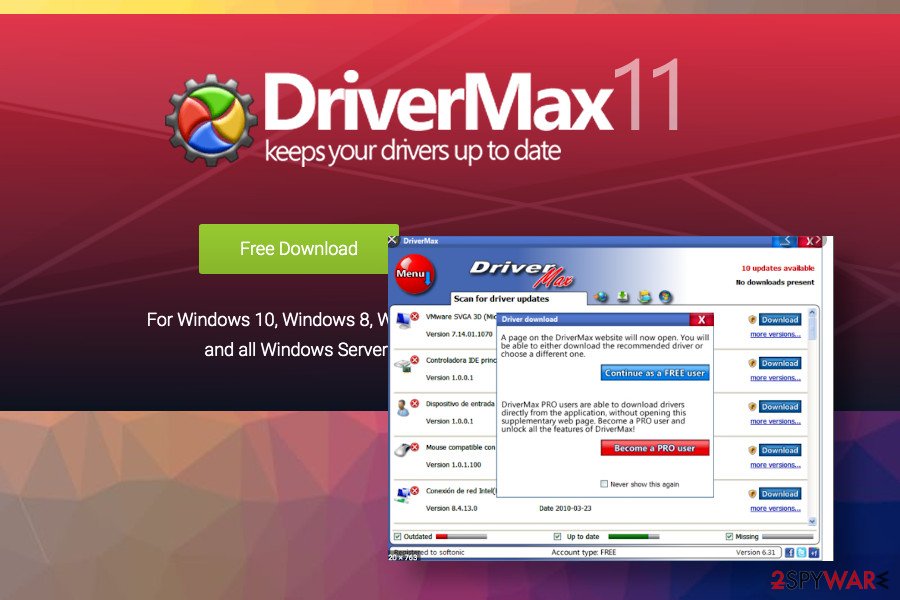 DriverMax introduces itself as a PC optimization utility capable of boosting PC's performance by regularly updating drivers. The tool is owned and managed by Innovative Solutions Inc., the company famous for VPN PRO, Advanced Uninstaller PRO, Orange Defender, and NeoSetup programs. However, the DriverMax has been included in the database of Potentially Unwanted Programs (PUPs) and rogue system tools[1]since 2014 due to the stealthy distribution technique, the rogue system scans, and the complicated removal process.

Although the developers of this program claim that it is able to increase PC's performance, they do not explicitly explain that nothing will be done as long as the user won't pay for the license key. After a successful installation via freeware, the DriverMax virus starts launching its scanners and returns exaggerated results to trick people that the system's drivers are out-of-date. Regardless of the subscription price of this updater, do not pay for a tool that, instead of boosting performance, can compromise your device and charge your credit card automatically until you cancel the subscription.

The DriverMax utility has been launched in 2014. Since 2016 it has been actively distributed via freeware and, therefore, frequently scolded by PC users. According to dieviren.de researchers, the program has been suspended for some time and reappeared in 2018.

If it manages to infiltrate the system as a companion of another free application, it grants the user's permission to start its first system scan. If it gets permission, it initiates this procedure and then provides a list of outdated programs. Typically, it reports multiple system errors and offers to purchase its license to fix problems and update drivers.

Before you enter credit card details and pay for DriverMax license, you should know that its alerts may be exaggerated and displayed only for tricking you. If, after all, you decide to pay for a licensed version, prepared for the redirection to the specific website that will ask you to create an account, and don't forget to cancel the subscription before it expires. Otherwise, the fee for subscription's continuation will be automatically charged. We recommend ignoring such propositions because they may be a cause of identity theft and similar problems.

By the way, if you enter your name, email, address, and other sensitive information, the DriverMax virus may start constantly sending you annoying emails offering you to download other suspicious programs. We highly recommend you ignoring emails sent by DriverMax and uninstalling this questionable application from the system.

The question of how to remove DriverMax is predominant when trying to research this tool on Chrome. People share their experience on Reddit and other forums when they were not able to find an uninstaller of this tool and how it uses tricksters under permissions settings to evade uninstall.

People are not allowed to remove DriverMax since its Properties are set to Read-Only option and the user is not given the admin rights to initiate changes. Although the user may slide a toggle to off next to Read-only, the settings are automatically restored once the Properties window is closed. 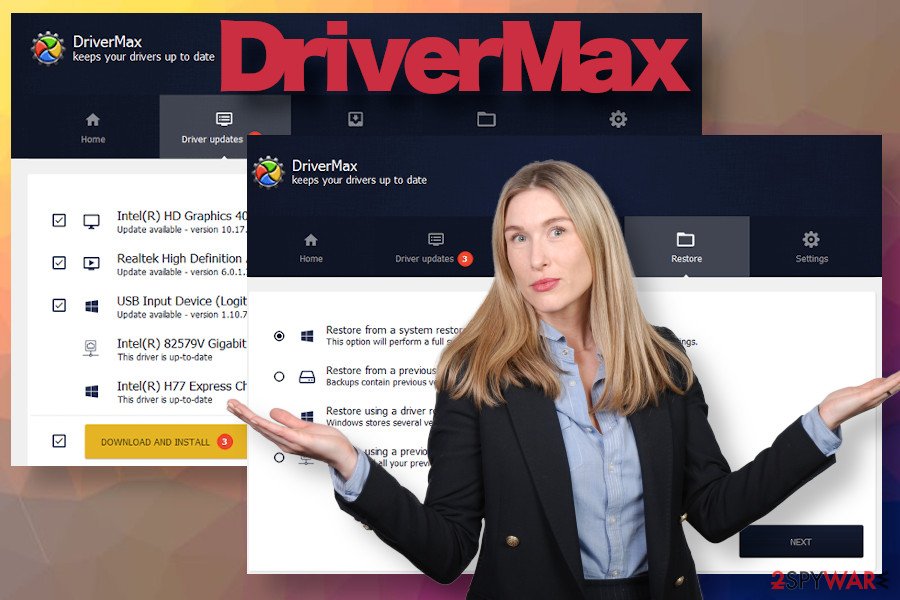 The easiest way to get rid of DriverMax driver updater is to initiate a thorough system scan with Malwarebytes, SpyHunter 5Combo Cleaner, or another AV engine. In case the removal process triggers a pop-up saying that the program is currently in use and cannot be deleted, disable drivermax.exe file via the Task Manager.

Note that the drivermax.exe file[2] itself is considered to be 54% dangerous due to the ability to connect to the Internet, record keystrokes, mouse inputs, and monitor the performance of apps. Thus, running it on the system is not recommended under any circumstances.

Those users who opt for manual DriverMax removal may also need to remove the C:\Program Files\Innovative Solutions folder or eliminate it completely. Finally, since this program tends to infiltrate PC bundled with freeware, there is a high-risk of adware or hijacker coming alongside.

Driver update software is not recommended using, especially when it comes with freeware

This particular software utility can be found on its official site where it is promoted as a “handy Windows Update utility which makes keeping your system drivers up-to-date an extremely easy task”. It is compatible with Windows OS (Windows 10, Windows 8.1, Windows 8, Windows 7, Windows Vista, and Windows XP). Users can download a free trial version or purchase a full license for a month, half of the year, or yearly subscription.

However, this PUP is more frequently downloaded via freeware or fake software update popups. You may expect to see this suspicious program on your system after installation of Download Managers, Video Converters, fake java/flash/player updates, and similar adware-type programs.

Do not trust notifications suggesting you free updates for Java or Flash Player[3] under any circumstances as these are condemned for malware distribution. Bundling, as such, is a legitimate way of disseminating the package of programs via one installer. The idea of this method is potentially dangerous has become prominent when users started complaining about ad-supported browser extension and browser hijackers being the main freeware attachments. 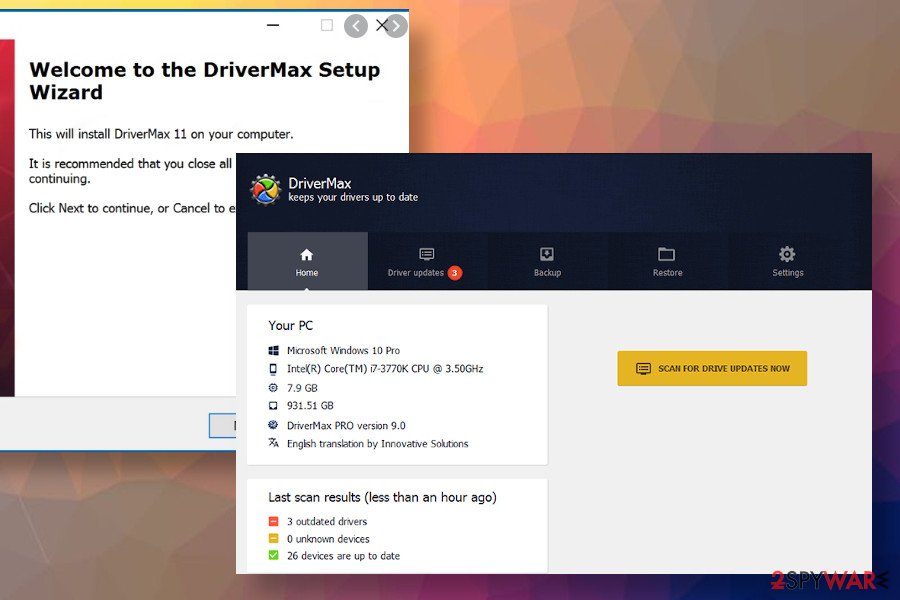 That's why security experts from NoVirus.uk[4] advise people to choose the Advanced/Custom installation option, which allows users to trace the whole installation process and decline such propositions. If you have already installed this rogue driver update tool, ignore the email messages that it generates, do not pay attention to the alerting scan results, and other activities. Instead, implement its full removal.

Uninstall DriverMax to prevent damage to the system's drivers

DriverMax is not a malicious program itself. However, it may pose harm to your computer's performance. It is not recommended to fix drivers just for the idea since a “wrong fix” may cause incompatibility errors, BSOD errors, and software crash.

If you decided to remove DriverMax, follow the guide submitted below and remove this application.

For manual removal of DriverMax, we recommend you using these steps:

If you are Windows 8 user, then right-click in the lower-left corner of the screen. Once Quick Access Menu shows up, select Control Panel and Uninstall a Program.

Nevertheless, we strongly recommend users remove DriverMax virus automatically using a tool like SpyHunter 5Combo Cleaner or Malwarebytes. That's because this PUP may be distributed alongside adware or another malware-type program may be promoted via this driver updater. A full system scan is the only way to ensure the full system's restore.

If you cannot find the answer on how to uninstall DriverMax, the following steps should save your day. Implement each step as explained and the malware removal should be successful.

Once these steps are finished, DriverMax should be removed from your Microsoft Edge browser.

Get rid of DriverMax from Google Chrome

Your opinion regarding DriverMax Cancel reply

You can quickly scan the QR code with your mobile device and have DriverMax manual removal instructions right in your pocket.