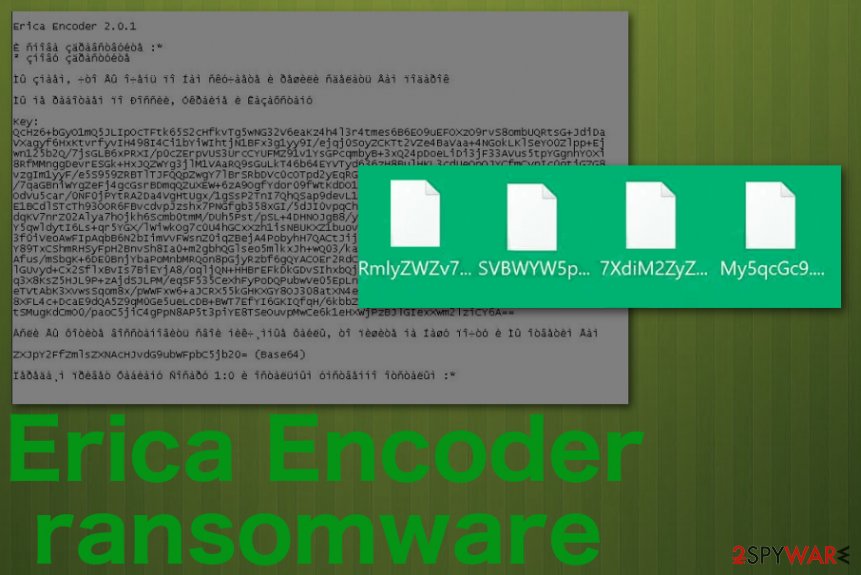 Erica Encoder ransomware is a threat that encodes files using the AES encryption algorithm and marks all the affected data, renames files using random characters and numbers. The appendix from random characters placed at the end of every file is needed to show the user which files got affected during the encryption. Since the main goal of criminals behind the threat is money, the ransom note HOW TO RESTORE ENCRYPTED FILES.txt is placed on the system immediately after the encryption with a message demanding for payment. That is written in Russian but also has a phrase in Ukranian. According to some researchers, it is believed that Erica Encoder is made by Ukranian hackers.

Ransom-demanding message insults users because of the short phrases placed through the text file, all state about the importance of backups, and calls the victim loser. This is a new threat, and Erica Encoder ransomware virus also gets called Erica2020 or Erica Encoder 2.0.1 ransomware because of the mentions in the same text file. Victims are encouraged to pay for virus creators because it is the only way to get back affected files, but contacting these criminals via provided erica2020@protonmail.com, erica_files@protonmail.com emails is not recommended.[1] You may get exposed to dangerous content and get additional malware instead of those decryption keys that hackers promise.

Erica Encoder ransomware is targeting Russian-speaking countries because the ransom message is initially written in this language with a few mentions in Ukranian. The sample of the threat got out there early January 2020 and is believed to be developed by Ukrainians because of the text note, including the traces of test encryption and some more Ukranian text. However, this threat can appear in any computer despite the country because distribution mainly involves random online content.

Erica Encoder ransomware demands money from victims in the ransom note file HOW TO RESTORE ENCRYPTED FILES.txt that displays this(translated from the original – Russian):

Hello again :*
I greet you again

We do not work in Russia, Ukraine and Kazakhstan

If you want to restore your worthless files, then write to Our mail and we will answer you

We give greetings to Fabian Sosar 1: 0 and the rest mentally retarded: *

Commonly, Russian-speakers get targeted by such malware due to political conflicts and general hate, but that doesn't mean Erica Encoder ransomware is not going to affect your machine if you are in another country of Europe or in the U.S. Cryptocurrency extortion-based threats are focusing on wide-spreading techniques and can end up on devices all over the world. You need to be cautious to avoid any infection no matter what.

The infiltration happens without any notice because the payload of the virus gets dropped directly on the system. You may notice some speed issues or affected performance of the machine, but encryption is not the process that you can spot. Also, it happens quickly since Erica Encoder ransomware developers mainly focus on this. 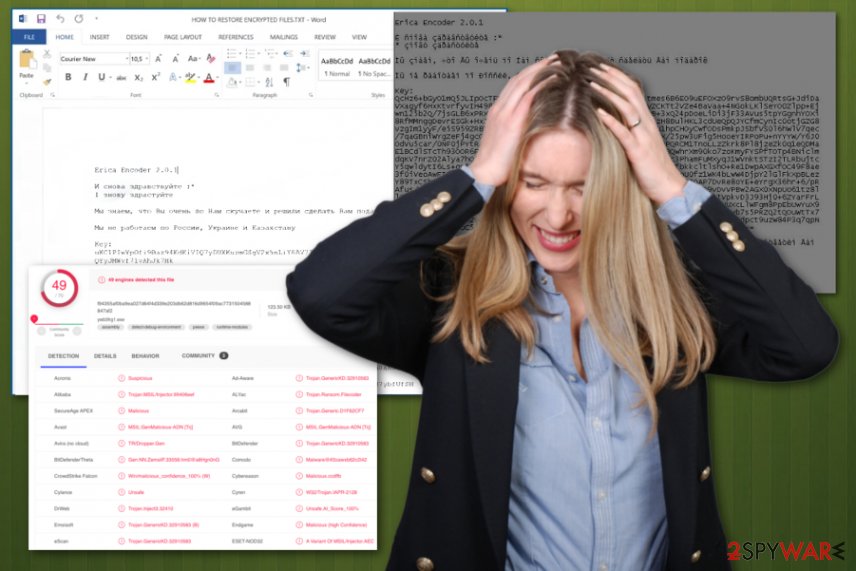 Erica Encoder is a dangerous cryptovirus because it is developed by criminals who only care about blackmail. The scary and insulting message from developers and the initial encryption process makes Erica Encoder ransomware victims confused and concerned. That is understandable, but we cannot stress this enough – paying is not the best option. If you try to connect with threat actors and ask for more information or a straight-up decryption tool, they can provide you with a certain ransom amount that you need to pay or deliver you the malicious file that damages the computer further.

Other experts[3] all over the world and we note that it is better to remove Erica Encoder ransomware without keeping the contact with criminals. It is not an easy process, and it involves security software help, but you can clean the machine and recover your files without the intervention from malicious people. If you have file backups up to date, you should do that as soon as possible.

If not – make sure to collect those encrypted files with the hope of recovering them with a later-developed decryption tool before you terminate the malware using AV tools. When ransomware gets deleted, most of the files needed for decryption get also deleted, so keep that in mind.

The particular Erica Encoder ransomware encrypts files using the AES encryption algorithm that allows the threat actors to change the original code of the image, document, video, audio file, database, or archive. There are no tools developed for the decryption, so the best way to recover those files is to restore them using safe copies stored on your external devices – backup.

Also, if you don't have backups that could help you with these encrypted files, rely on third-party software that can restore such affected data. Only do that after the proper Erica Encoder termination because any program or file related to malicious threat can lead to repeated encryption.

Once Erica Encoder virus is eliminated, and all the programs get disabled, removed from the machine, it is time to tackle virus damage on the machine. To do that properly without causing any damage to your machine, you should use a PC optimization tool or a repair software like ReimageIntego. Programs like this can be helpful because Windows registry entries or system files affected by the malware may get repaired, and virus damage eliminated without any danger. If you try to alter startup preferences or registry entries, you can cause problems with essential PC functions.  Erica Encoder ransomware - malware that alters common files and asks for payments. Do not consider paying and remove the threat as soon as you can instead.

Protecting yourself and your valuable data from crypto-extortion malware

Since there are tons of different malware types, distribution methods also go all over the place and depend on a particular virus, malicious campaigns, and malware developers. Ransomware is a category also has many ways that are commonly used to deliver the payload of such intruders.

One of the more common ones- spam email campaigns when legitimate-looking emails are received and include attachments injected with malicious scripts directly or macro malware that is designed to trigger the drop on the machine with a few clicks. You need to note that any email that is not expected can deliver malware and delete suspicious notifications as you get them.

Also, a few red flags to look out for:

Erica Encoder ransomware virus is not a simple threat because it involves encryption, file altering functions, and blackmailing victims directly. Additionally to the primary encoding function, this threat interferes with crucial settings, disable functions helpful for virus termination, and file recovery, so the victim has fewer solutions.

These symptoms can make people frustrated and desperate to find the best way to remove Erica Encoder ransomware. Unfortunately, since security tools get blocked or disabled and programs designed to fight against malware cannot work correctly there are some steps you need to take additionally.

We have listed a few methods below, like Safe Mode and System Restore, that can help to achieve better results of Erica Encoder ransomware removal. An additional recommendation is to choose a trustworthy anti-malware tool for system scanning. ReimageIntego, SpyHunter 5Combo Cleaner, Malwarebytes can also help to tackle virus damage and repair affected system parts.

Guide which is presented above is supposed to help you remove Erica Encoder from your computer. To recover your encrypted files, we recommend using a detailed guide prepared by 2-spyware.com security experts.

If your files are encrypted by Erica Encoder, you can use several methods to restore them:

To restore encrypted data or accidentally deleted files, you should get a tool that is capable to do so

When System Restore gets enabled, Windows Previous Versions can be used for file recovery

When malware like Erica Encoder ransomware is leaving Shadow Volume Copies untouched, you can rely on ShadowExplorer

Decryption tool for Erica Encoder ransomware is not developed yet

Finally, you should always think about the protection of crypto-ransomwares. In order to protect your computer from Erica Encoder and other ransomwares, use a reputable anti-spyware, such as ReimageIntego, SpyHunter 5Combo Cleaner or Malwarebytes

You can quickly scan the QR code with your mobile device and have Erica Encoder ransomware manual removal instructions right in your pocket.