Warning for Linux OS owners: FairWare virus is on its way

While the majority of ransomware threats aimed at Windows OS users, FairWare virus now sets its target on Linux OS users. It seems to differ from its malwrae counterparts by a few features. Though the threat attempts to block servers and certain websites, it is still possible to remove FairWare. Some speculate that the threat takes the liking of corporate users since it causes more significant damage. Likewise, there are bigger chances to receive the payment. In any case, we do not recommend making the transaction as there are no guarantees given. Instead, shift to FairWare removal. You can use Reimage Reimage Cleaner to do that.

This threat is classified as ransomware, but the most intriguing feature is that it may not encrypt the files. Actually, it takes hold of the files and then transfers them to remote server. There have been cases with previous ransomware which simply deleted the personal data, but it is unlikely in this case. Nonetheless, FairWare malware demands 2 BTC which is even to 1,151.33 USD.

Taking a look at READ_ME.txt, the hackers seem to enjoy themselves since the manner of speech clearly bullies its victims. What is more, the average term given for retrieving the data is set to be two weeks. The cyber criminals urge to contact fairware@sigaint.org only when the users have remitted the payment and had their server and payment ID codes. The message warns users not to ask supposedly foolish questions related to data recovery. Moreover, it does not offer to obtain any software which would verify the files being in the hackers‘ possession. 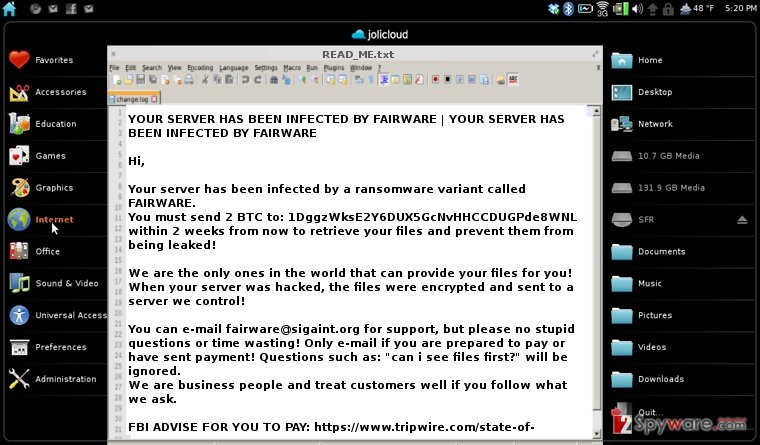 Analyzing this virus, it is likely that the current version is just an experiment. Linux OS users detected the virus after realizing that some of their websites were shut down. The file with the instructions is usually placed in the /root/ folder. It might be just the beginning of a bigger cyber campaign since the malware blocks websites and servers.

How does the virus infect computers?

Besides the removal, such question might indeed cause curiosity. It is likely that FairWare ransomware mainly disperses via spam emails bearing malicious attachments. Unfortunately, hackers have reached a certain degree of mastery since differentiating a fraud from an official email became quite a challenge. Users have been attacked lately with fake emails from telecommunications, transportations, customs or tax institutions. Such emails are forged in quite a persuasive way. After seeing the logo and credential of a supposed specialist, few users anticipate the danger of opening the malicious attachment. Furthermore, it is vital that you would increase the security of your operating system by installing a proper security application. Later on, the ransomware might employ trojans or exploit kits as transmission tools. Thus, only an updated anti-spyware is able to detect on time before they sneak into the operating system. Lastly, stay alerted when visiting file-sharing domains. In general, cautiousness might reduce the chances of FairWare hijack.

Effective elimination of the ransomware

At the moment, the only possible way to remove FairWare might be the automatic termination. You can use either of anti-spyware application, though we recommend Reimage Reimage Cleaner or Malwarebytes. Meddling with the threat manually might not bring any wanted results. The security software is specifically created for confronting such viruses. The program will perform FairWare removal within a couple of minutes. Later on, you need to consider where and how you will keep the files to avoid a similar unpleasant scenario in the future. FairWare virus might delete volume shadow copies, but you will evade the frustrating consequences if you keep the private data in several portable data storage locations.

Finally, you should always think about the protection of crypto-ransomwares. In order to protect your computer from FairWare and other ransomwares, use a reputable anti-spyware, such as Reimage Reimage Cleaner , SpyHunter 5Combo Cleaner or Malwarebytes

You can quickly scan the QR code with your mobile device and have FairWare ransomware virus manual removal instructions right in your pocket.