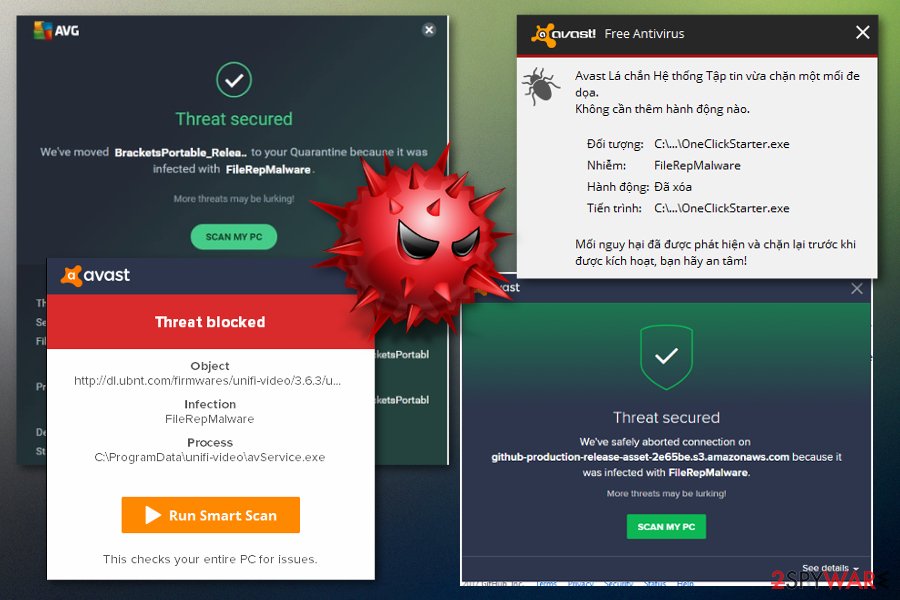 FileRepMalware is the cyber threat that can have various functionalities from PUP to trojan. This detection name also is known as Win32:Evo-gen [Susp]. Most commonly Avast and Avg AV engines[1] reporting about the potential danger of the file or website. In most cases, antivirus terminates the threat and reports about the already eliminated intruder. It is associated with suspicious KMSPico installations and similar apps that are supposed to activate programs without the developer's knowledge. But there is a big possibility that this malware gets on the system as a virus itself and proliferates Windows system. Since various commercial content comes to your screen due to this infection, it is believed that FileRepMalware virus is a PUP[2] but other detection names associated with the virus show trojan functionalities and possible danger to your system. You shouldn't ignore those alerts and employ AV to clean the device.

The FileRepMalware virus has been considered as a Trojan Horse.[3] It's one of the generic detections, which means that antivirus fails to recognize the exact behavior of the file, but due to suspicious traits, classify it as potentially malicious, and immunize immediately. Besides, the popularity of the file seems to be important as well.[4]

The technical references of the FileRepMalware, which is Win32:Evo-gen [Susp], can be translated as follows – Win32 means that the reported file is a part of Windows system, while the Evo-gen imply a generic classification of trojan-type files.

If your antivirus returned an alert urging to remove FileRepMalware PUP from the system, all certified security specialists[5] would agree that should do so without delay. This potentially unwanted program (PUP) or file has been discovered spreading with a fake KMSPico app. The latter is capable of downloading an adware program to the system. Therefore, the malware may be responsible for opening the back door and executing other malware (adware, browser hijacker) to the system. 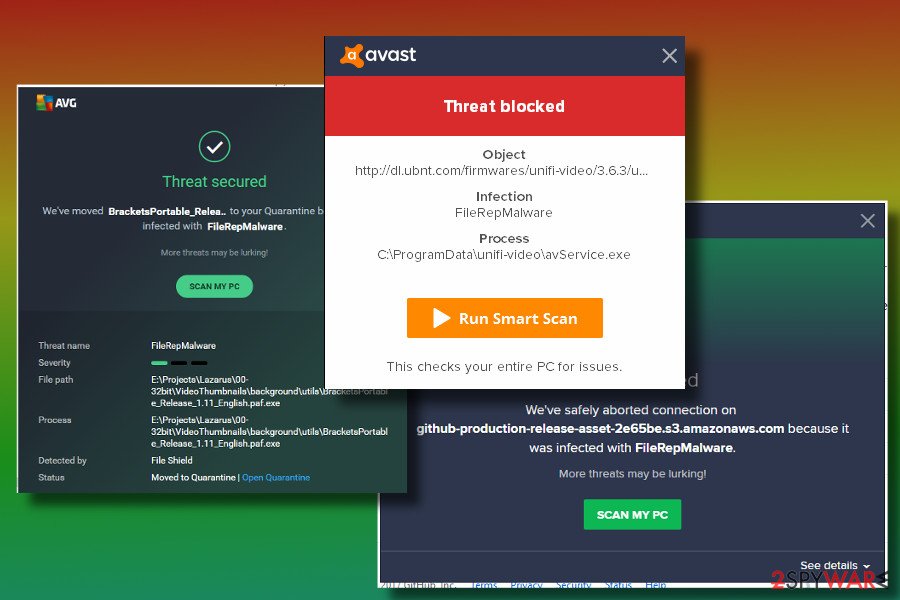 FileRepMalware is a term used by AV and AVG engines to warn users about the possible danger of the file.

To prevent suspicious activities that malware is capable of doing, you should initiate FileRepMalware removal asap. If your antivirus has already warned you about this threat, terminate it without any doubt. Additionally, fix the damage caused by this malware with the help of Reimage Reimage Cleaner Intego or another reliable security tool. Those who did not deal with malware before should know these facts:

Unfortunately, more updated and severe malware can delete files on your system or even add new suspicious data on the device to make sure the main virus is persistent and difficult to remove. When FileRepMalware virus is on the system, repetitive errors appear on the screen, and various programs even get shut down out of nowhere.

You need to focus on removing FileRepMalware because slow computer performance is only the start of frustration and possible damage to your device that this threat can cause. If you store your personal information on the computer, malware can access that and even use in further scams when you receive spam email messages or suspicious calls on the phone.[6]

Make sure to remove FileRepMalware using a reputable anti-malware tool, and we recommend employing other programs than the one that displayed errors to double-check. Also, repair tools like Reimage Reimage Cleaner Intego can improve the performance by cleaning possible virus damage and fixing issues. 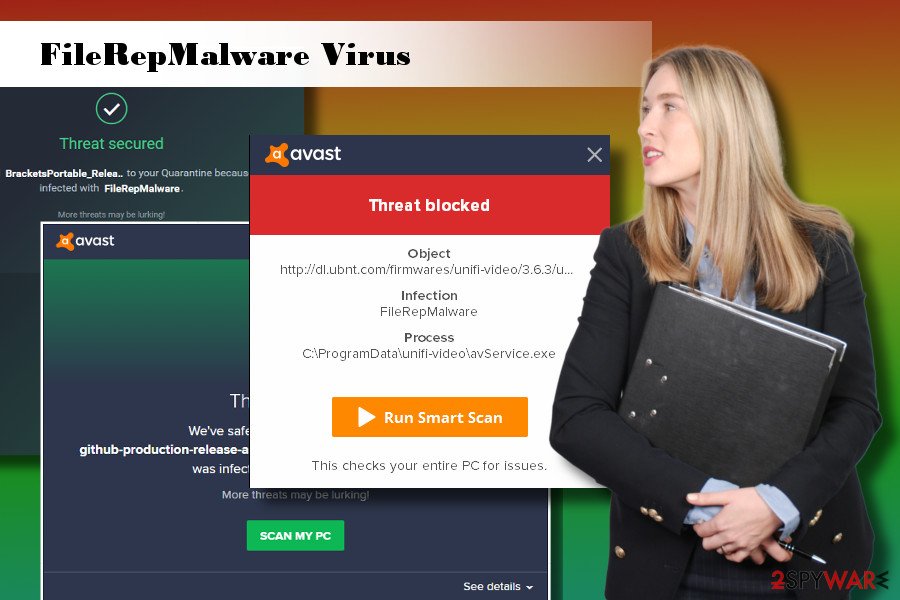 FileRepMalware virus is a potentially malicious file. Currently, it's considered to be a Trojan Horse, but has also been found to be related to the KMSPico app.

Harm that can be brought by trojans

However, if the worst had happened and a Trojan horse entered your Windows computer system by the name of FileRepMalware, you need to be prepared to face unwanted and even damaging consequences. Trojan infections never bring anything positive and sometimes are very hard to detect by the human eye.

If you have ever been infected with a trojan via FileRepMalware, you will supposedly receive increased CPU and GPU work.[7] Also, the malware might relate to software and computer slowdowns, start injecting harmful executables in different locations and run malicious processes in the Windows Task Manager directory.

Be aware if FileRepMalware appears to be a malicious program and not just an ad-supported application. Trojan horses might relate to the collection of personal data and crucial system details. If you discover this dangerous threat, do not hesitate and grab reputable anti-malware software to permanently delete the virus from the machine. 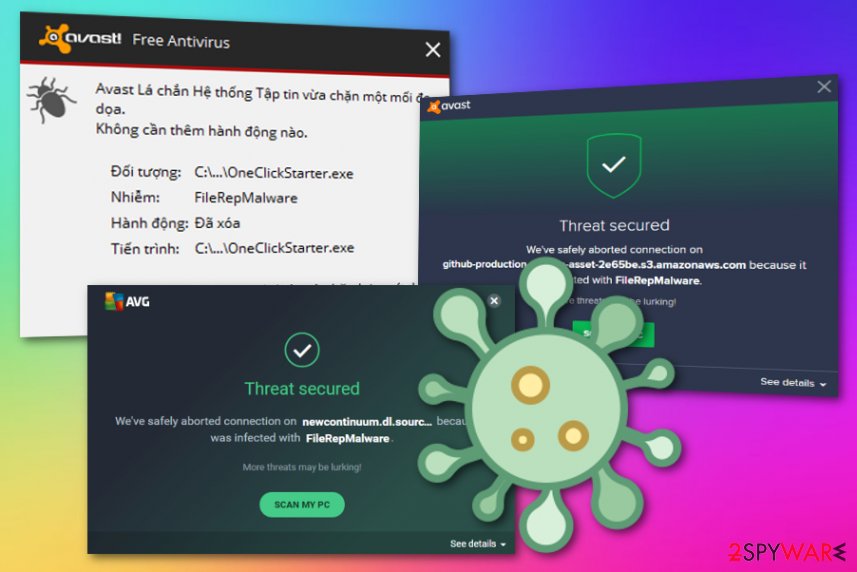 Typically malware spreads as a part of legitimate free apps. Indeed, illegal or dangerous programs can also transmit potentially malicious files, but needless to say that such programs should never be installed. Few people reported that they were not allowed to install specific software updates due to the AV detection of these malicious files.

To proceed with the installation, they disabled the antivirus temporarily. Please don't do that! Although AV engines can be wrong, the warning about a potentially malicious file should not be ignored as you can end up with malware on your PC. Besides, having an expert-tested antimalware program is always crucial for any type of computer system.

Also, it's essential to check whether an “Advanced” or “Custom” installation option is available. To monetize free services, freeware developers often attach PUPs to the main installer and discloses them under “Quick” or “Basic” installation methods. Therefore, to prevent unwanted programs on the system, be extremely careful when choosing and installing free apps.

If your antivirus successfully immunized the file, you don't have to bother anymore. If, however, you were informed about a threat by your antivirus or noticed the file on one of the Windows or Windows system folders, get rid of it asap. As long as the behavior of this file hasn't been clarified, we would highly recommend you to perform FileRepMalware removal asap.

It's challenging to remove FileRepMalware manually. This file may come into the system, meddle into Windows system folders and then multiply. Therefore, the best way to get rid of it is to run a scan with an updated anti-malware. Additionally, you should use a professional utility to recover your Registry to its primary state. Note that the virus tends to alter it according to its needs.

Also, you should also check for KMSPico and other potentially unwanted programs on the system that was installed on the system at the same time as FileRepMalware virus. Note that a big variety of software can hide suspicious content into web browser applications, so you should check Chrome, Firefox, Edge, Explorer, and other browsers too.

If you want to try to remove FileRepMalware manually, remove all potentially unwanted programs from Control Panel. Also, check all Windows and Windows System folder and HKEY_LOCAL_MACHINE\Software\Microsoft\Windows\CurrentVersion\Run folder in Windows Registry:

If you noticed an excessive amount of advertisements when browsing, remove PUPs and potentially malicious files and then reset your web browser.

Cleaning Microsoft Edge is possible if you complete all of the below-given instructing steps correctly:

Once these steps are finished, FileRepMalware should be removed from your Microsoft Edge browser.

Discovered something suspicious in Mozilla Firefox? Do not worry, you can remove all unwanted objects from your web browser by performing these below-given steps:

You may need additional checking for threats related to FileRepMalware virus on your Google Chrome browser:

Findin unexpected extensions or plug-ins in your Safari web browser does not signal about anything good. The removal of adware-based objects can be successful by following this guide:

Your opinion regarding FileRepMalware Cancel reply

You can quickly scan the QR code with your mobile device and have FileRepMalware manual removal instructions right in your pocket.