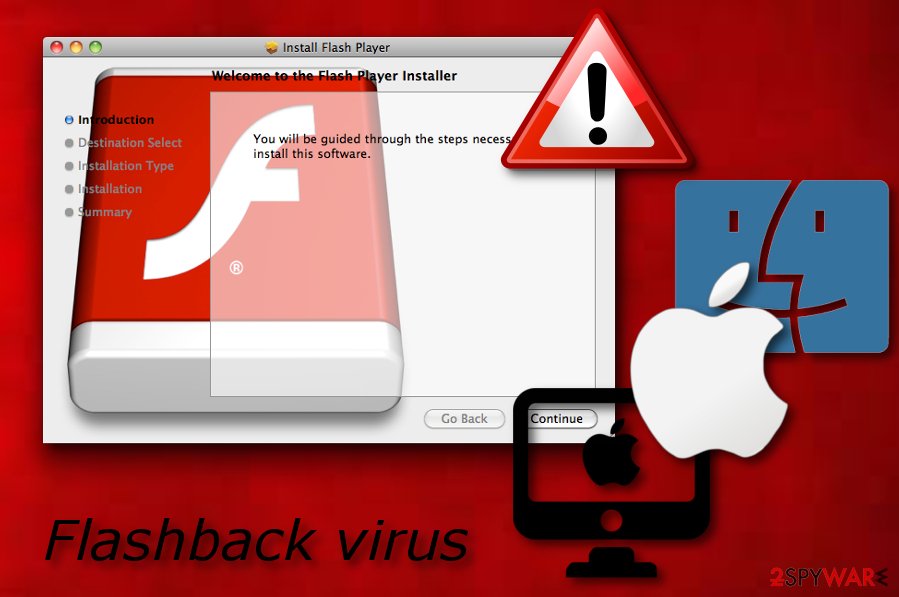 Flashback virus, also known as OSX.Flashback, Fakeflash, Flashback trojan, or Trojan BackDoor.Flashback. This fraudulent Trojan horse[1] affects Mac users and their computer systems only. Furthermore, Flashback virus was discovered several years ago – in 2011 by an antivirus organization named Intego. The dangerous infection uses a tricky Adobe Flash Player installer with the name “Flashback” in order to infiltrate the victims' computer systems.[2] It is very important to know that infections such as trojan ones are capable of secretly hiding on the infected machine and performing hazardous activity silently. Flashback trojan can also be very dangerous if kept on the system for a long time. A trojan infection can relate in many things such as the injection of other viruses, identity theft, program crashes or corruption, system sluggishness or unrepairable damage, high CPU and GPU usage, etc.

Talking about April 2012, when the Trojan horse was first launched, it made attempts against numerous Mac users worldwide. According to research, most people that were infected lived in The United States – about 56%, after that in Canada – 19.8%, United Kingdom – 12.8%, and in Australia – 6.1%. Furthermore, the trojan was modified into a more modern one called BackDoor.Flashback.39 and discovered in April 2017.[3]

A report claimed that this dangerous virus infected numerous Mac machines by creating a botnet which contains 274 bots. This variant targeted Java vulnerabilities which were found on the Mac PC. Moreover, the trojan injected a malicious executable to be able to run a specific code from a remote server. Additionally, this version of the Flashback virus was able to infect only those users who visited the malware-laden website.[4]

As we can see, Flashback virus is an extremely malicious trojan which has been active for several years. Such infections can cause unrepairable damage to your computer system or even relate in sensitive data losses. Even though Trojan horses do not show any particular symptoms, sometimes they can be identified from these signs:

If you spot the beforementioned symptoms, make sure you remove Flashback virus from the system as soon as possible. For this purpose, you should use only reliable and expert-tested computer security tools that will complete the process effectively. Furthermore, make sure that all malware-laden components are also found. For this, we suggest downloading and installing a computer program such as ReimageIntego.

Flashback virus - a Trojan horse which enters the computer system as a fake Adobe Flash Player.

Performing the Flashback trojan removal requires a big variety of skills. This is the main reason why the Trojan horse cannot be eliminated by using manual technique. If you decide to get rid of the dangerous computer infection on your own, you might cause even more trouble or damage the system. However, it is advisable to boot the computer to Safe Mode with Networking that might help you to disable some malicious activities.

Flashback virus seems to be extremely malicious as it is very hard to terminate. According to cybersecurity researchers, once the malicious attacks had emerged in the past years, Apple decided to release Java Runtime Environment (JRE) which would be a way to deal with the dangerous malware and would be available not only on Mac but also on other operating systems such as Windows, Linux, and Solaris. However, the release did not come out and did not stop the trojan from infecting numerous Mac users in 2014.[5] 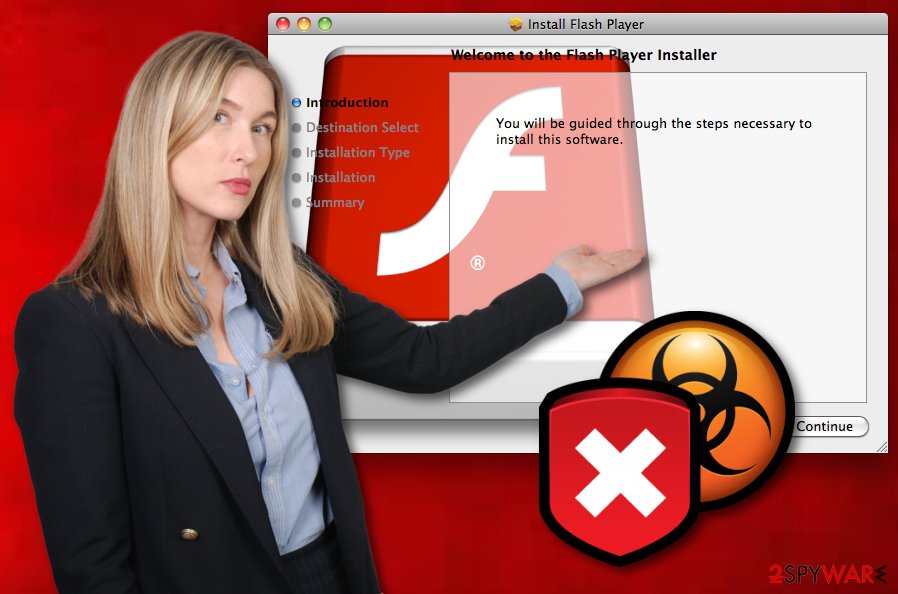 According to the specialists' team from NoVirus.uk, Trojan horses can be distributed in a few ways. The most common distribution sources are malware-laden websites, phishing email campaigns, and rogue attachments. Even though these cyber threats are extremely sneaky, you can take some precautionary measures to avoid them from infiltrating your Mac or Windows computer:

Furthermore, a good option would be to purchase a reliable anti-malware program. Our suggestion would be not to be afraid to invest in a truly reputable and effective tool. Remember that the antivirus needs to be updated once in a while. If taken care of properly, the computer security software will allow you to perform regular system scans and alert if some malicious components are found.

Once spotted in the Mac operating system, the trojan infection needs to be removed ASAP. To remove Flashback virus, you will need to lean on reputable antivirus tools that will complete the process effectively. Moreover, we recommend installing a system optimization program such as ReimageIntego that will detect various rogue objects such as malware-laden components, outdated registry entries, and increase the speed of your computer's work.

After you perform the Flashback trojan removal, make sure that you perform some system backups. This action will ensure you that the cyber threat was eliminated successfully and is no longer active in the system. Furthermore, do not forget to memorize all trojan avoiding techniques. Perform such steps in the feature to avoid similar infections and keep your Mac or Windows computer safe from damage.

Turn on the Safe Mode with Networking function to deactivate the dangerous computer virus:

Activate System Restore on your computer system by following these below-given steps:

Finally, you should always think about the protection of crypto-ransomwares. In order to protect your computer from Flashback and other ransomwares, use a reputable anti-spyware, such as ReimageIntego, SpyHunter 5Combo Cleaner or Malwarebytes

You can quickly scan the QR code with your mobile device and have Flashback virus manual removal instructions right in your pocket.