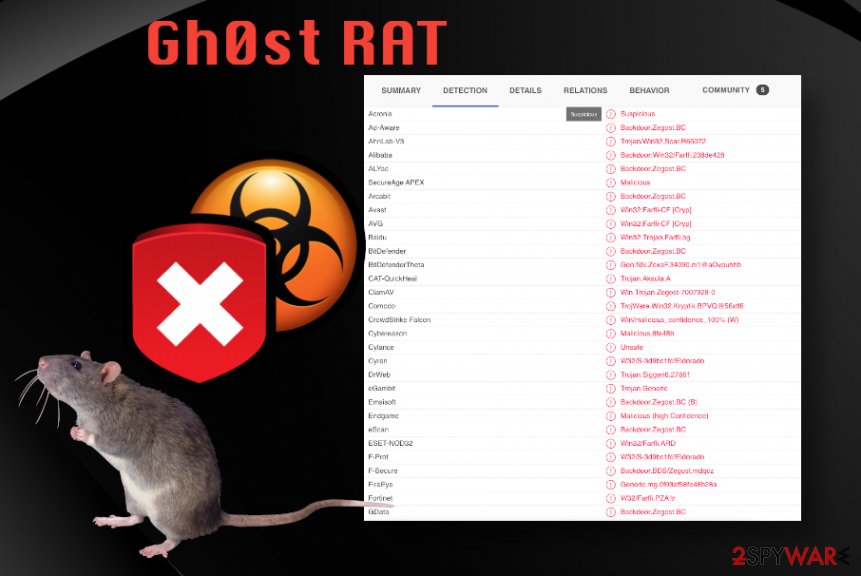 Gh0st RAT is the remote access trojan that can be set to control the infected device remotely and open backdoors for more severe threats like ransomware. Cybercriminals can set the tool for any wanted purpose because it is a complex wide-range malware. In most cases, such threats are used to cause damage, problems with privacy, or finances and lead to losses of data and funds. This threat started to appear on devices in 2016 when first attacks surfaced. Cybercrooks released the trojan in state-sponsored attacks and campaigns targeting political opponents of the Chinese ruling party. It also has been included in many attacks targeted towards businesses and industries. It is known that the same threat source code is used at least since 2012, but there are many people who can either obtain or update the payload and spread it around.[1]

Gh0st malware can be extremely powerful because criminals who use the RAT to achieve their goals aim to get a bigger number of valuable files or directly steal money. In 2017 and 2018, researchers stated that this threat was released targeting individual people too. It can be advertised on shady websites, hacking forums, and pretty much any malicious actor can purchase the virus to spread it around and gain power over any victim. Malware like this is silent, and operations that can be associated with a trojan are not observed easily since mainly background processes do not cause any symptoms.

Gh0st RAT can be used to carry out any illicit activities that criminals behind the attack set to achieve. It can range from spying on users directly to stealing various data and information from machines, web browsers. This trojan can:

Gh0st RAT is the threat that hackers already know, copy, and use. It is updated and complex malware that causes remote attacks because it allows hackers to control machines in real-time. When complete control is gained by a malicious actor, a computer becomes a tool for malicious activities.

Gh0st malware can turn on the webcam, microphone and record you, run other functions, and monitor what is going on in the room or on the device. It is considered to be a powerful malware because spyware runs in the background and performs all the operations silently and sometimes trojan can exit the system once all the needs activities are done.

Some victims of such threats cannot even remove Gh0st RAT when it is no longer running on the machine, but the damage is already done, and exposure to malicious content, other infiltration, and malware added behind your back can remain after the move. Checking the system more often with AV tools and security programs can ensure that such infection will not happen again.

Unfortunately, Gh0st RAT often evades detection[2] and ensures the persistence by changing settings, running or disabling programs on the machine. These alterations make the cleaning and virus termination processes difficult, but you can reboot the machine in Safe Mode with Networking before you run any AV tools, so the machine is thoroughly checked, and all trade of malicious programs removed. 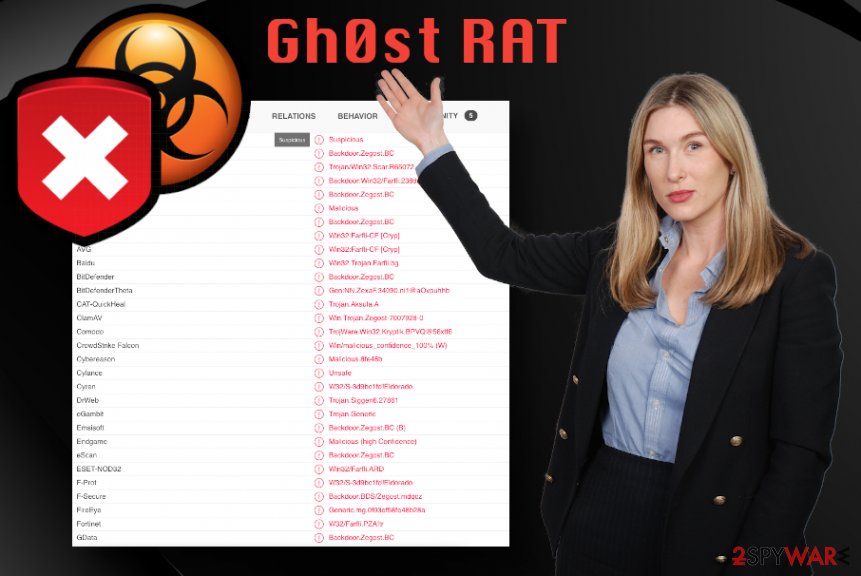 Gh0st malware - remote access tool that is possibly used to infect the machine with other threats like miners or ransomware.

If attackers manage to take full control over the machine by using Gh0st RAT, the computer can become a tool for mining cryptocurrency[3] because resources of the computer may be used to perform such activities and gain profit for the hackers. The infected host can be affected further when remote binaries get downloaded, or hacker enters the shell to have full control.

Gh0st RAT removal is the particularly difficult procedure because of all the files, programs that malware ads or take, and because of the changes made in the background of the system. Registry alterations are one of the processes that can trigger serious virus damage when not taken care of in time. But any interference with such essential parts of the PS can create further issues. We recommend relying on professional tools like Reimage Reimage Cleaner Intego instead. This utility is more likely to check and fixes those affected files without damaging anything else.

Most antivirus detections are generated automatically since Gh0st RAT has encrypted capabilities it is hardly recognizable as malware. This threat as a few components that make it more dangerous than any other trojan or information-stealer:

Malicious intruders that remain running in the background can come to your device using various techniques. Most of them involve infected files or hacked sites because this is the way that malware creators can trigger the payload drop and installation automatically. User interaction is not needed or need only at the beginning.

Identical looking malicious sites can misuse interfaces of cryptocurrency platforms or other services to steal credentials, trigger downloads of the file that installs trojan directly in the background. As for malicious files that come via pirated software or cheat code packages these mostly come as EXE or DLL files, so you don't pay close attention to such pieces and allow them to get downloaded.

Unfortunately, the most malicious method is spam email campaigns. Users receive emails from companies, services, and other senders that resemble known sources or commonly used platforms. These notification include malicious files with macro functions, and the only requirement is that the user downloads the MS document and enables the content. Once that is done, the payload is automatically triggered, and infection starts. Avoid anything that you are not sure about: emails, sites, messages, download pages.

Gh0st RAT virus can unfortunately, have versions, and since its source code is available for everyone, it can be updated and generally modified by any malicious actor that decides to spread the threat around. A number of known variants shave the possibility to date itself once the initial actions are done.

Gh0st RAT removal can be achieved, and even when the main trojan is not on the machine, full system check and virus termination process can significantly increase the speed and performance of the computer. When you rely on SpyHunter 5Combo Cleaner or Malwarebytes and run those on the system with the full system scan function, you can see what PUPs or more serious threats affect the system from the inside.

There are no reasons to skip through steps when you receive a full list of threats. A few clicks of the mouse and the machine is cleared from any malware. Unfortunately, if you have lost files or money, there are not many options for you, but you can remove Gh0st RAT and get rid of the virus damage using Reimage Reimage Cleaner Intego after that. From there, precautionary measures and steps to ensure that the machine is safe are crucial. keep reliable AV tools on the PC and run it more occasionally, so the computer is virus free in the future too.

Finally, you should always think about the protection of crypto-ransomwares. In order to protect your computer from Gh0st RAT and other ransomwares, use a reputable anti-spyware, such as Reimage Reimage Cleaner Intego, SpyHunter 5Combo Cleaner or Malwarebytes

You can quickly scan the QR code with your mobile device and have Gh0st RAT manual removal instructions right in your pocket.