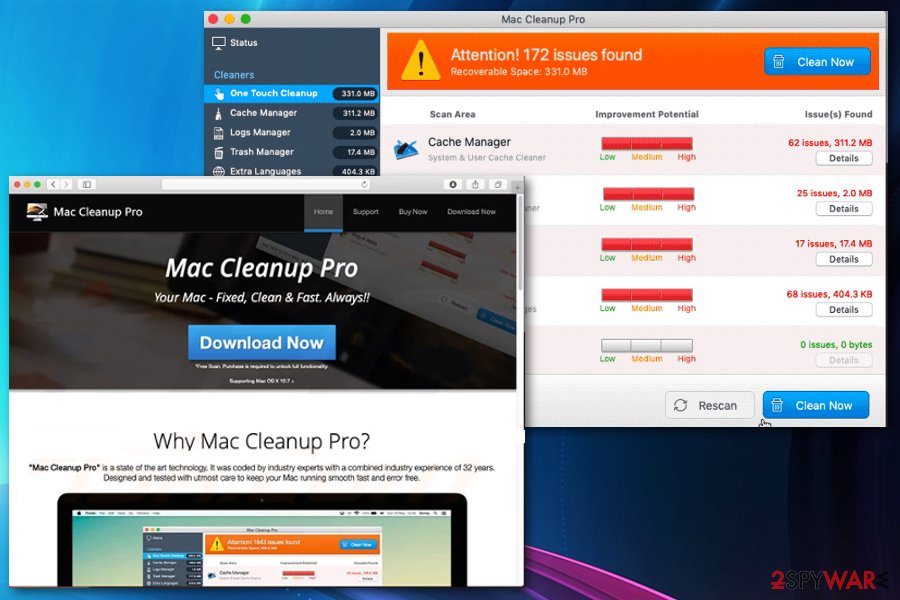 Mac Cleanup Pro is a potentially unwanted application (PUP) that looks legitimate and handy while gathering various sensitive information about its user. Just like Advanced Mac Cleaner, Mac Auto Fixer, and similar viruses, this tool appears to be a good Mac OS optimizing program. However, the program has been using deceptive techniques to spread around and then delivering deceptive advertisements to convince its victims that they have numerous issues on their computers. At the moment, the virus is spreading as a Flash Player update by using such and similar notifications: Flash Player Update!, Adobe Flash Player is out of date, and similar. Beware that these ads are fake and you should take care of Mac Cleanup Pro removal. The virus is also associated with adware[1] trying to infect the system with a totally useless app. To sum up, you should never invest in such tools if you don't want to lose your money.

While the term “Mac Cleanup Pro virus” is not entirely accurate, users have been actively using it to describe their struggle with this program. The biggest concern is its intrusive behavior that has been frustrating people for several months now. After infiltrating its target computers with the help of bundling, the PUP has also been causing havoc on the system and also failing to leave the system when being asked.

The main activity of Mac Cleanup Pro relies on fake system scanners that are displayed each time the system is rebooted. Additionally, the app starts reporting numerous issues and offers to purchase its license to fix all of them. All these scanners can significantly diminish the time you spend on your device and make your computer or browser run slow.

You may also notice that your Safari, Google Chrome or Mozilla Firefox browsers have started displaying numerous ads while browsing the Internet. This promotional content is used to promote either this tool or similar applications that are supposed to:

However, this list is used just to trick you into installing even more PUPs on your computer. Additionally, these programs can not only start interrupting you with their fake ads but can also trick you into purchasing their useless full versions.

Another big problem with programs like Mac Cleanup Pro and other suspicious tools is the relation with advertisers and sponsors. This association leads to data gathering and sharing the accumulated information with third-party companies. Your IP address, location, browsing history, most viewed sites, and other online preferences can be tracked. Later on, this information can be used to generate more commercial[2] content on your screen.

There are tons of similar programs that look legitimate and useful but provide no real value. Unfortunately, they can also affect the performance of your device, its speed, and even security. You need to remove Mac Cleanup Pro as soon as you notice any of these signs showing that you are affected by the PUP:

Mac Cleanup Pro removal can be performed by using your antivirus tool or manual removal method which is described below. Later on, use programs like Reimage Reimage Cleaner Intego to fix the damage caused by these silent infections. There is a possibility that, during the infiltration, additional threats got on your computer and affected significant parts of the system. If your Safari or other web browser keeps redirecting you to Bing, reset the affected browser

To uninstall Mac Cleanup Pro from the system, use the guide at the end of this post. However, the full system scan is still considered more reliable as the virus has been spreading together with “OperatorMac” and similar components. At the moment of writing, Malwarebytes is considered the easiest way to get rid of this virus. If you want to use your own tools, rely only on reputable ones to clean your system thoroughly. 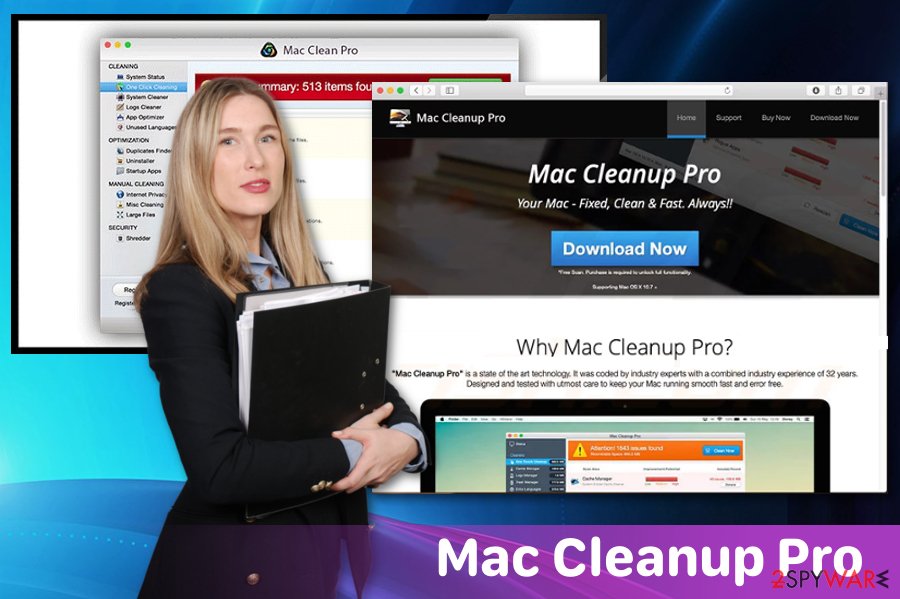 Mac Cleanup Pro is a virus that allegedly scans the system and delivers questionable results about malware activity on your PC.

Software bundling is a deceptive technique used to distribute PUPs

Various fake error messages promote or distribute rogue system optimization tools as capable to fix virus damage. Unfortunately, these tools cannot fix issues on your computer. Silent intruders that come to the computer without consent and permission give the opposite effect.

According to researchers[3], the most common method used to spread this fake Mac optimization program is fake ads offering Abobe Flash Player, Mojave, and similar updates.[4]. We can assure you that Apple has nothing in common with this virus. That's why it has always been recommended using official sources while looking for updates.

Additionally, this tool can come into the system together with other freeware bundles distributed during insecure installations. If you opt for Default or Quick method you may get additional tools and programs installed on the system. This is the silent method that affects the performance of your computer.

Choosing Advanced or Custom options everytime you install any program can beneficial because you can de-select unwanted applications and install the tools you need only. Also, getting your software and updates from reputable sources helps in avoiding these silent cyber infections.

You need to remove Mac Cleanup Pro from the system as soon as possible and since this is an aggressive program which can install other tools, lead its victims to financial damage and lead to other issues. It roots deep inside the system, so make sure you don't waste your time with this threat.

Having in mind that the PUP has been using different techniques to prevent its removal, you should use automatic anti-spyware software. Such programs will not only help you get rid of this virus but will also improve the performance of your device by eliminating browser helper objects and similar malware-related components.

Mac Cleanup Pro removal can also be performed manually. To uninstall the virus and fix issues related to it, carefully follow the guide given below. However, a thorough system scan is also recommended as a way to terminate this PUP completely.

To uninstall Mac Cleanup Pro from Mac, get rid of its entry. You should also delete the fake Flash Player and similar apps that seem suspicious. Finally, make sure you check Library/Application Support and similar locations:

If Chrome keeps redirecting you to Bing or a similar site, use this guide to reset your web browser:

Get rid of Mac Cleanup Pro from Safari completely by following these instructions:

Get rid of Mac Cleanup Pro from Internet Explorer (IE)

Reset IE to refresh your web browser and stop redirects to unwanted websites:

Once these steps are finished, Mac Cleanup Pro should be removed from your Microsoft Edge browser.

Fix Firefox with the help of this guide:

You can quickly scan the QR code with your mobile device and have Mac Cleanup Pro manual removal instructions right in your pocket.