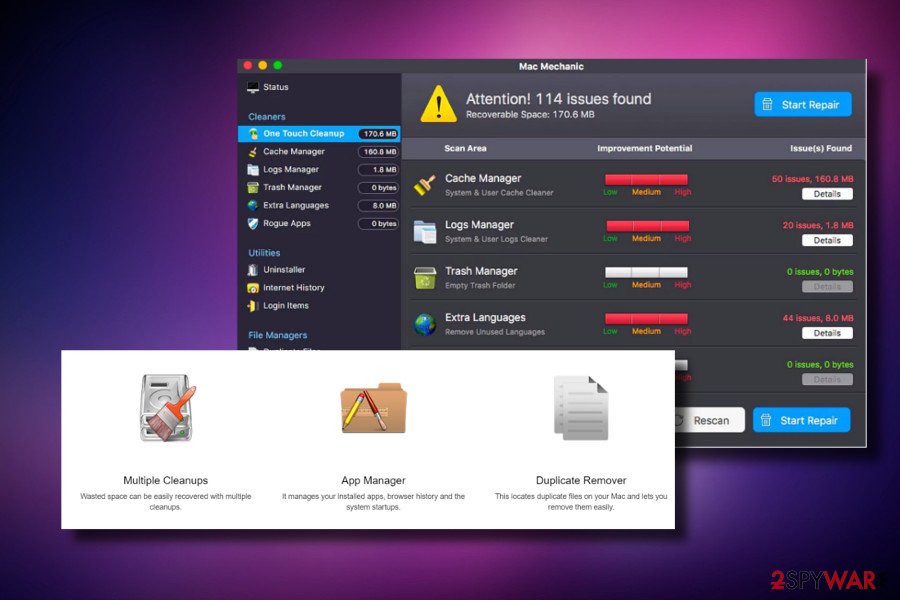 Mac Mechanic is a potentially unwanted program[1] that is advertised as a system optimizing tool for Mac OS X. The business model of such applications is relatively simple: several thousand users install it via software bundling and a full system scan is automatically performed. Victims are then caught in the panic moment when their screen starts flashing several warnings, as hundred of issues are detected by Mac Mechanic. Users are then prompted to buy its licensed version in order to fix the alleged system errors. However, this is merely a scam and there is nothing wrong with the device. Additionally, users complained[2] about unending amount of pop-up ads appearing out of no were and immensely reduce web browsing experience.

Just like many other similar tools (Advanced Mac Cleaner, Mac Tweaker, etc.) Mac Mechanic promises users that it can fix, clean, and improve the performance of the device. Developers also promise that users can enhance their Mac performance by using such tools as System Cleaner, App Manager, Duplicate Remover, and similar functions. However, Mac Mechanic is merely an adware application that is also actively trying to scam users and providing no actual benefit.

Mac Mechanic has an official website and can be either downloaded or purchased directly. However, to maximize the number of its users, the developers monetize freeware developers for the chance to spread it alongside popular free apps. Additionally, Mac Mechanic virus can also be downloaded and installed when redirected from dubious advertisement banners and pop-ups.

Free apps contain a free trial version of the Mac Mechanic, which once installed loads a fake scanner and initiates a long lasting system scanning. Not only it diminished system's performance, but also generates predetermined scan results, which reports a multitude of Mac problems regarding cache libraries, the excessive amount of junk or even existence of malware. 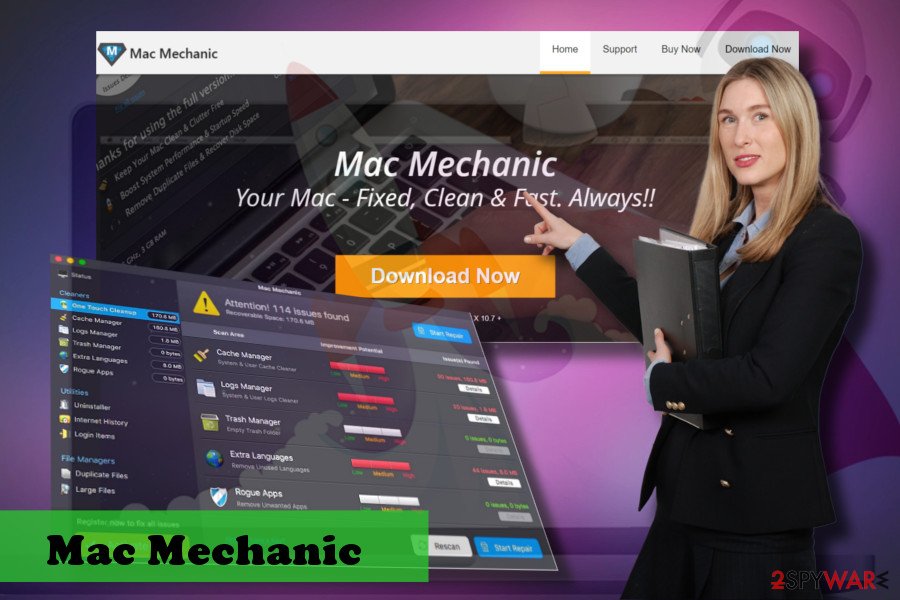 Mac Mechanic is a PUP that can also be dubbed as a rogue Mac optimization utility. It's purpose is to trick people into installing its free version and then foist a license key for a considerable amount of money

However, the scan results of the Mac Mechanic are bogus. The tool contains a pre-installed list of scan results,[3] meaning that most of the issues reported are either non-existent or random Mac system's file names.
No, Mac Mechanic is not going to speed up your Mac or otherwise influence its performance positively. In contrary, keeping this tool on your system can result in the following side-effects:

Users also complained that one of the most irritating traits of Mac Mechanic is that it creates an incredible amount of advertisement, which plagues Google Chrome, Mozilla Firefox or Safari browsers. According to victims, Mac Mechanic also initiated ads when browsers were not in operation at all. All the attempts to remove Mac Mechanic were also in fain, as ads merely returned after deleting its original folder. Nevertheless, please read on to find out how to delete Mac Mechanic ads.

Even though Mac Mechanic app does not feature malicious traits, it's a misleading software that deceives its users by empty and leads inexperienced PC users to money loss. Our partners from senzavirus.it[4] warn that removal of random system files or supposed duplicate files using this misleading app can cause serious outcomes.

The only way to stop this tool from displaying unrealistic and exaggerated scan results is to initiate a complete Mac Mechanic removal from Mac. Since it's considered to be a legitimate Mac assistant, it should have an automatic uninstaller. Therefore, you can try to remove Mac Mechanic virus in a primitive way, i.e., drag and drop it to the Trash bin and then eliminate related files from the libraries.

If, however, you cannot do that because uninstaller is not provided or because the tool keeps reinstalling itself, you should scan the system with a reputable security tool, such as Reimage Reimage Cleaner Intego or SpyHunter 5Combo Cleaner to eliminate Mac Mechanic malware along with its components. 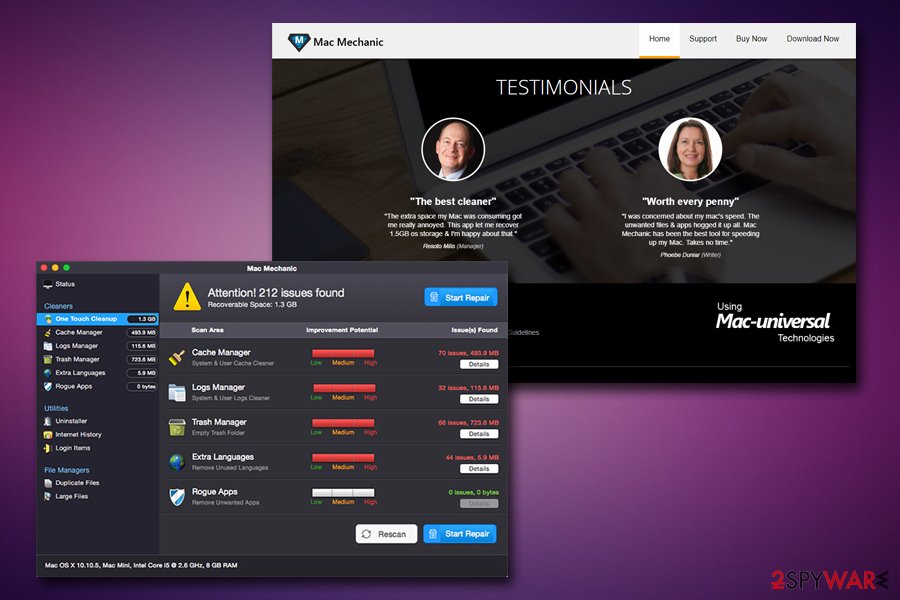 This rogue Mac optimization utility is distributed using two methods – officially and stealthy. It has an official website that provides a direct download of a free trial version and allows purchasing a full version a couple of limited time special offers, including Sticky Password.

However, direct downloads are very rare. This tool is already infamous and classified as a PUP by most of the security vendors. Nevertheless, it's developer practice a stealthy distribution strategy, which is incoherent from freeware and shareware.

The PUP is attached by various free apps and included into the free offer's list across multiple download sources. Consequently, it can easily enter the system's of home users is they select Quick or Recommended freeware download method.

To prevent stealthy infiltration of PUPs, you should opt for Advanced or Custom installation method and monitor each installation step. Opt out of propositions to install useful web browser's add-ons or extensions, as well as reject unknown optimization tool.

Mac Mechanic is oriented to Mac OS users. Therefore, it might be spreading along Mac-supported free apps, but not necessarily. Its developers seek to generate income by selling bogus service. 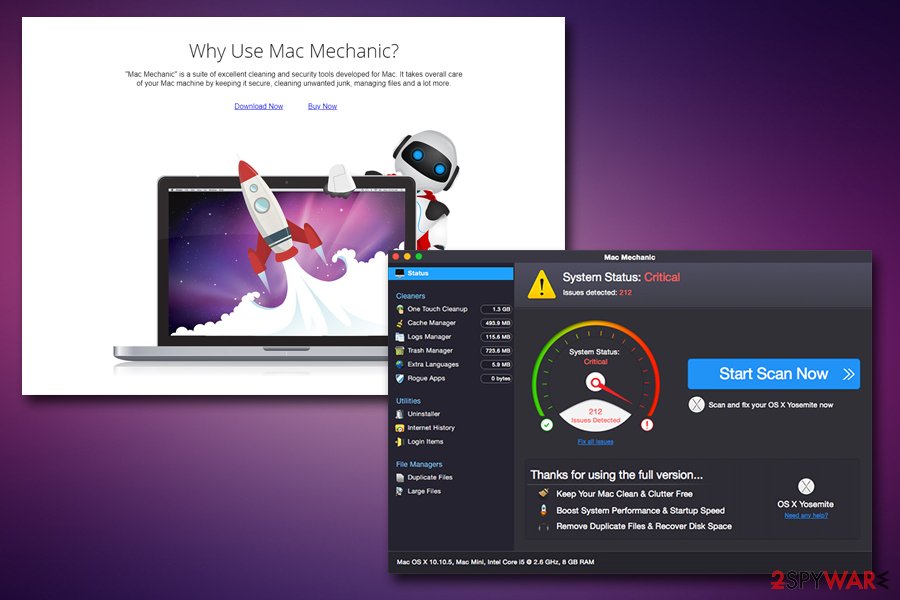 If you've been tricked to install this app, we would highly recommend you to set up Reimage Reimage Cleaner Intego or another reliable anti-malware tool and scan the system with it. To treat Mac Mechanic removal complete, you have to be sure that all its components that it might have been bundled with have also been removed. Therefore, a reputable anti-malware is a great option to clean PC from PUPs.

Nonetheless, you can remove Mac Mechanic app manually with the help of instructions provided down below this article. Make sure to perform each step carefully not to leave malware remnants.

This PUP might spread in one pack with browser hijackers. In case your web browser's settings have already been compromised and you are currently forced to use a bogus search engine, remove all PUPs from the system and reset the affected website.

Get rid of Mac Mechanic from Mac OS X system

To get rid of Mac Mechanic from Mac OS X, follow these instructions:

Once these steps are finished, Mac Mechanic should be removed from your Microsoft Edge browser.

You can quickly scan the QR code with your mobile device and have Mac Mechanic manual removal instructions right in your pocket.