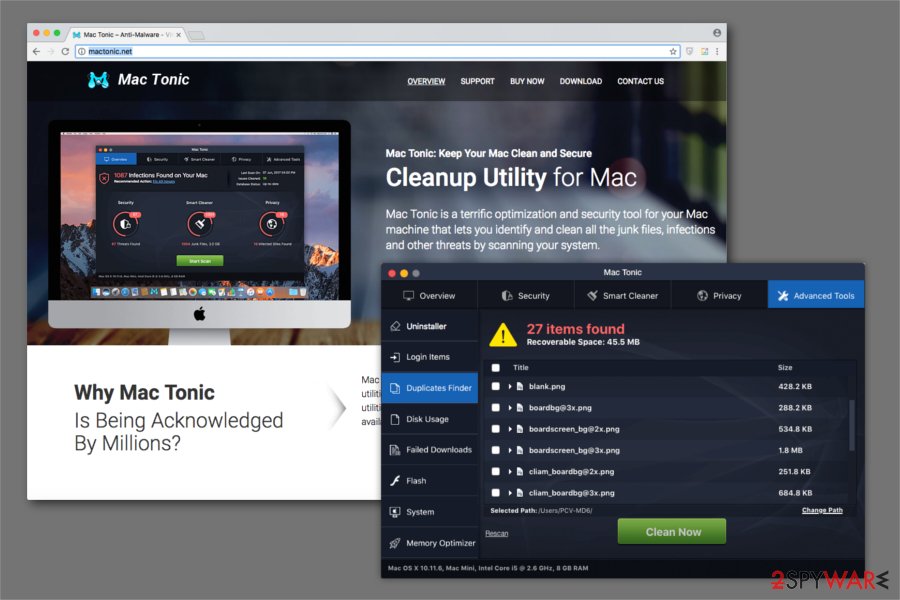 Mac Tonic virus is a fake system optimization tool designed for Mac operating systems. While thousands of such utility tools exist, most of them have one trait in common – they show fake scan results in order to make users purchase a full version of the program, which consequently leads to money loss, although benefits the Indian-based developer. The programs are useless, even though claims on promotional ads state the opposite.

While Mac Tonic can be downloaded on its official website – mactonic[.]net, most of the users noticed the application performing scans out of nowhere – they do not recall installing it. This is because the developers often use software bundles[1] to propagate the app worldwide.

Additionally, Mac Tonic virus is also distributed with the help of fake Adobe Flash Player and Adobe Shockwave updates – an activity which is typical to many dangerous adware programs (Advanced Mac Cleaner, for example), as well as malware.[2]

Finally, users also complained about problems after Mac Tonic removal attempts. They said that even after moving the app to Trash, they were still receiving pop-ups prompting them to install and buy the application, and, in some cases, it gets reinstalled automatically repeatedly. This is another malware-like behavior, and should never be tolerated.

To find out how to terminate Mac Tonic completely, please check the bottom section of our article. There are some tips and tricks, software suggestions that show what processes, files and programs you need to eliminate to get rid of this rogue utility.

Developers of Mac Tonic claim that it should help computer users identify and clean all the junk files, infections, and other threats by scanning your system. Unfortunately, these are merely empty promises as Mac Tonic cleaner cannot improve your computer performance in any way. If you for the full license, it stops displaying its fake scan reports and stays still until the next time you reboot your computer.

If you wonder is Mac Tonic safe, the answer to the question is more than simple: no. Despite many system cleaning utilities being at a state of “controversial,” this app moves down a level when it comes to cybersecurity. Installing itself without permission, using fake updates for the infiltration, detection avoidance, as well as removal problems all indicate that Mac Tonic not only should be avoided but also treated like a security threat the macOS.

Besides, it is designed to swindle money from inexperienced computer users by delivering fraudulent virus scan results. Because Mac Tonic does not provide any benefits to the computer whatsoever, spending money on it simply makes users waste their money on useless utility tools with malicious behavior.

In fact, Google Chrome is not flagging the official website, along with the installer of Mac Tonic as malicious. Thus, users who want to enter the site and are using Chrome will be met with a warning:

The site ahead contains harmful programs

Attackers on mactonic.net might attempt to trick you into installing programs that harm your browsing experience (for example, by changing your homepage or showing extra ads on sites you visit). Learn more

Even after taking extra steps to download the app, Chrome will simply block its installer altogether, stopping users from installing it. 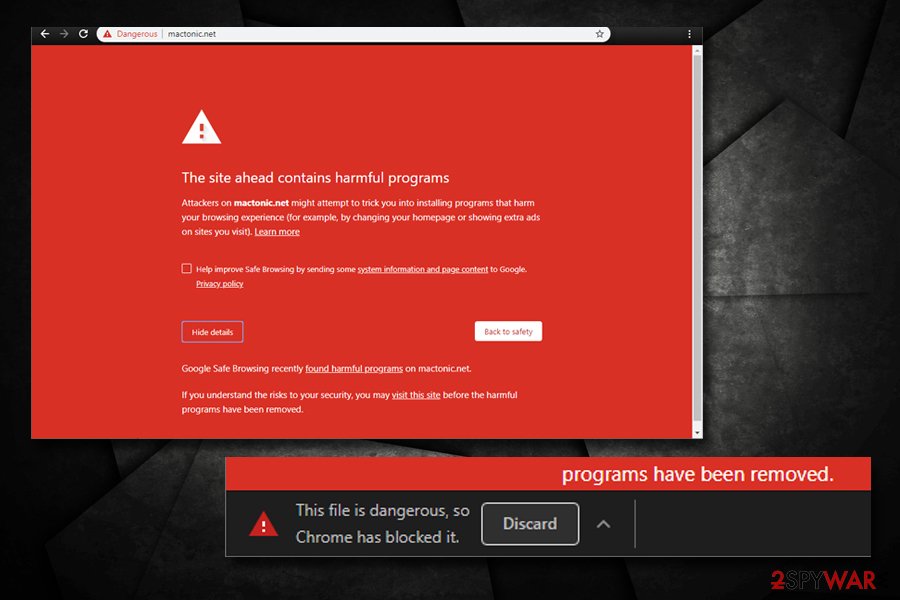 Therefore, if you noticed Mac Tonic on your machine, get rid of it as soon as possible. It will not optimize it or protect from viruses, as it a computer threat on itself.

Please note that the developers are working under the same name as a legitimate computer repair service located in Oregon. The company clearly states that they are not related to this Mac Tonic fake cleaner and suggests reporting it if you became one of its victims:

WARNING: There's a malicious “cleanup” app from India floating around called “Mac Tonic” (mactonic.net). This is NOT our product, and we are making every effort to resolve this identity confusion. If you're one of many innocent victims of this software, please report mactonic.net to GoDaddy and/or your preferred review site. Thanks.

Processes and files left behind in the system can significantly affect the process of Mac Tonic removal because anything still running on the machine makes the PUP active. Tonic Tasks is the process related to this deceptive application that, according to users, runs in CPU and other resources even after the program termination. It begins to activate itself in the background when the Mac Tonic gets installed, but it also can be launched separately via dubious websites and promotional advertisements.

Once the system is launched Tonic Tasks Mac Virus also starts running in the background, affecting the speed and performance significantly. It behaves as wanted without asking for any permission from the user. This application also uses those fake scan results to promote other programs and delivers more pop-ups with ads. When it generates additional redirects if can run in the background and collect important information about users. This program can:

You may need to check the Activity Monitor for this process or .pkg extension files and even spot-search there to find the associated background processes. Those need to be ended, to run a device smoothly again. The best solution is an automatic anti-malware scan because this way all suspicious processes should get indicated as dangerous and ended completely.

According to some users, Tonic Tasks virus removal involves terminating various programs like Adobe Flash update, try to uninstall that and then clean the machine with an anti-malware tool to fully delete Mac Tonic.

Our experts have encountered people asking is Mac Tonic a virus. This software is not categorized as Mac Tonic malware. However, users cannot trust it scans your computer files for potential cyber threats and show modified results. These actions are performed to ensure that people believe that they must clean their systems immediately. 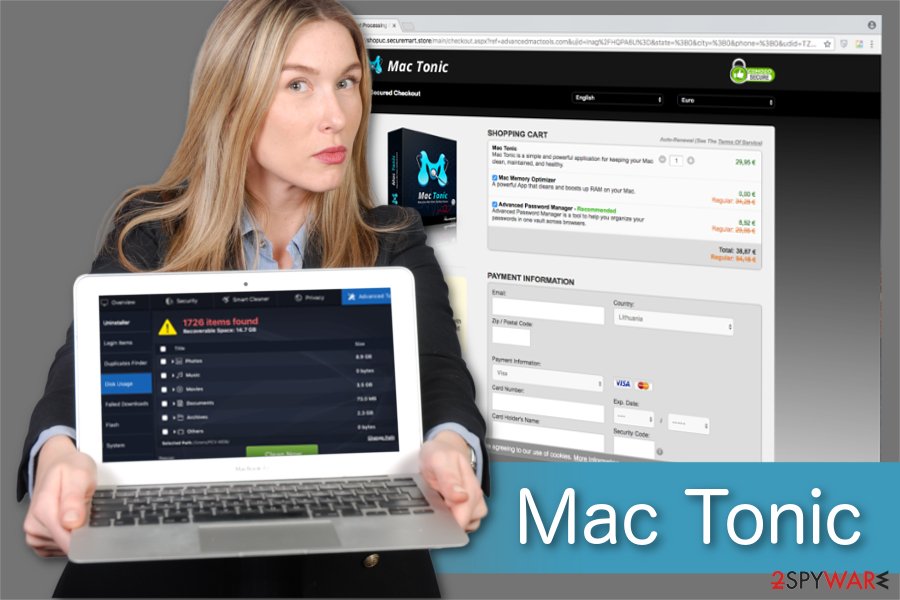 Mac Tonic is a questionable program which displays modified scan results to trick people into purchasing the full version of the tool.

Mac Tonic cleaner displays notifications that the computer is infected with numerous malicious programs and requires help right away. Although, it can only be done if you agree to purchase the full version of this fraudulent software. We want to warn you that your system is not infected (apart from Mac Tonic itself).

There might be some potentially unwanted programs (PUPs) present on your PC, but they can be eliminated without purchasing this expensive and ineffective Mac Tonic tool. Thus, be aware that virus scan results by this cleanup software are manipulated to trick you.

Instead of agreeing to pay for the questionable software, learn how to uninstall Mac Tonic and get a professional antivirus. If you run a full system scan with a reliable malware removal tool, you will see that you are being informed about non-existent infections. We encourage you to compare the results and start thinking about Mac Tonic removal.

You can find manual elimination guidelines if you wonder how to delete Mac Tonic. They are attached at the end of this article. However, our security experts suggest installing Reimage Reimage Cleaner for an automatic removal process. This way you will be sure that this potentially unwanted program (PUP) won't reappear in the future.

Even though the most common way how this potentially unwanted program appeared on your PC is through the manual download from the official mactonic.net site, there is a substantial risk that it could also sneak inside via software-bundles. If you have recently installed freeware without close inspection, the PUP might enter the system through optional components of the app.

Therefore, it is vital to reject Quick/Recommended settings during the installation of free programs. Instead, you should choose Custom/Advanced mode of the installer and attentively monitor the process. These settings reveal the pre-selected additional components which grant the permission to install PUPs together with the primary software.

You must de-select those checkmarks and double-check your system with a reliable antivirus. Note that before installing any programs, you should attentively read the Privacy Policy, EULA, Terms of Use and related reviews online[4]. This is the best way to avoid all suspicious and potentially dangerous applications. 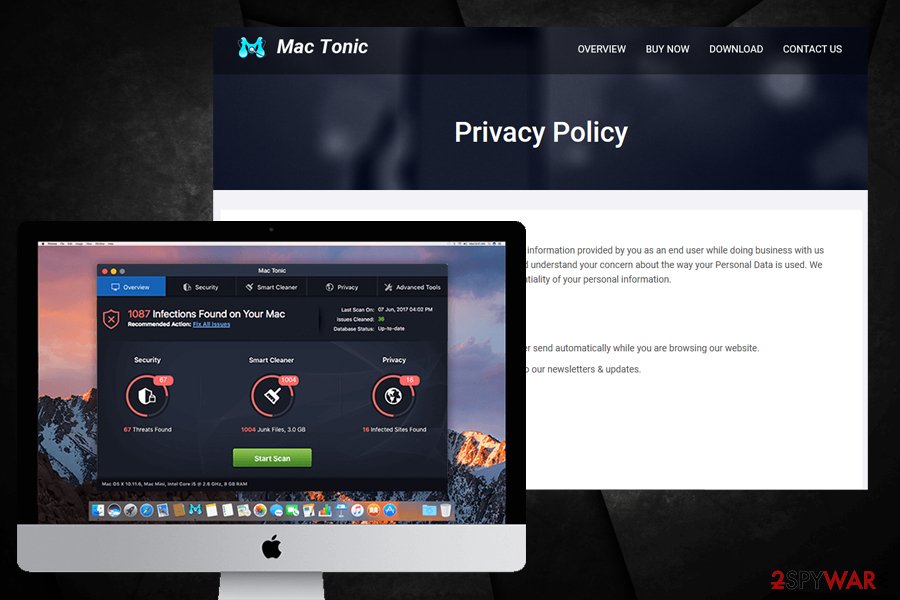 Despite the fact that Mac Tonic provides Privacy Policy and other documents, it does not make it a secure app.

Learn how to remove Mac Tonic from your computer

Researchers[5] say that those who wonder how to remove Mac Tonic should know that there are two options — manual and automatic elimination of the fake system optimization tool. Even though everyone can choose the most convenient method, we strongly recommend employing professional antivirus programs for help.

Automatic Mac Tonic removal would require you to merely download a robust malware elimination software and let it scan your entire system. In several minutes the security software would finish the procedure and show potential cyber threats. It takes only one click before your Mac is clean.

Otherwise, you can try to uninstall Mac Tonic manually. This is a slightly more complicated method that might require advanced IT knowledge. Although, follow the elimination guidelines presented at the end of this article. Before you start, however, you need to make sure that the process of the app is not running. For that, open Activity Monitor and shut down the task.

IMPORTANT NOTE: Even if Mac Tonic virus is removed, tonictasks might still hide inside your computer. To fix this problem, you need to access Mac Library. To make it visible follow these steps:

Next, perform the following actions:

Additionally, to make sure the dubious app is gone and Tonic Tasks are no longer appearing, we would recommend removing Adobe Flash items, as well as uninstalling it altogether.

Below you will find instructions showing how to uninstall Mac Tonic software from your Mac:

You can quickly scan the QR code with your mobile device and have Mac Tonic manual removal instructions right in your pocket.