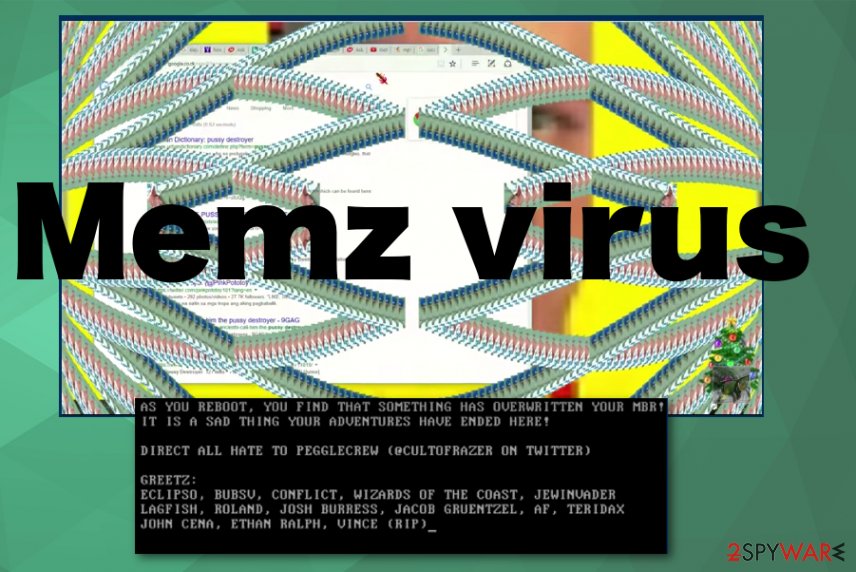 Memz virus is the trojan originally created by Leurak as viewer-made malware for the YouTuber Danooct1 that is distributed freely online.[1] Due to this spreading on the internet and destructive activity, it gained fame and popularity. This is a dangerous malware that runs many payloads and executes them one after the other. Although it shows internet memes this trojan is not a joke and can damage the machine because the more recent version of Memz trojan is especially destructive and once launched on a physical device it rewrites the operating system without the possibility to reverse these changes.[2] This is a trojan that can make significant changes in the infected machine and even access or steal data stored on the computer. Such malware can install additional programs on the PC after the initial infiltration.

There are at least two versions of MEMZ trojan: one harmless version, which people use for fun. This one delivers memes and doesn't run any malicious payloads. The second malware version is the one that affects the Master Boot Record by overwriting the first 64 KB of data of the hard drive and can cause serious damage to the operating system. If you have encountered Memz virus, you should take all the measures in order to delete the infection and restore the Windows system back to normal.

Memz virus was intended for fun, but malicious actors got a hold of the script and managed to distribute many more variants online. The initial malware had multiple warnings when the executable was about to be opened, but many users ignored them and allowed their machines to be infected anyways. Now trojan is distributed on the internet for various reasons and can be exceptionally malicious and damaging.

Memz trojan uses highly complex and unique payloads and activates them all one by one in a row. The first scripts are not that damaging, but the malware runs a few programs to make changes on the system and ensure the persistence. However, the final payload is the most harmful because it can lead to permanent damage and make the machine completely unusable.

Once installed, Memz virus has only a few symptoms that the infected users might notice:

Memz trojan manages to damage the computer or spread more malware on the already infected machine. It causes screen colors inverting every second, various web browser windows opening and closing, creating the tunnel effect and triggering reboots of the machine. In other words, if you are among the unlucky ones who are infected with it, you will not be able to operate your properly until you remove Memz virus from the system. 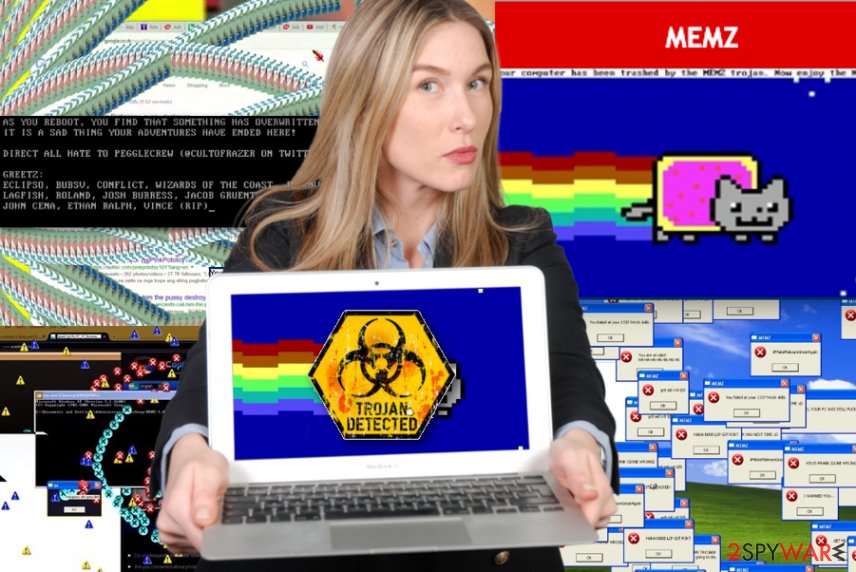 MEMZ virus is the trojan shows various internet memes and sometimes is considered a joke, not a virus. This is a destructive trojan that should be taken seriously.

Once the virus made needed changes and infected the machine, you can encounter countless pop-ups appearing on the screen with internet memes or random pictures. While Memz virus can take over your desktop with all flashing and popping content, the more harmful feature which allows the infection to overwrite the data on the hard disk. Your Master Boot Record can get affected by this trojan.

When the machine cannot run the operating system, Memz virus delivers this message:

Your computer has been trashed by the MEMZ Trojan. Now enjoy the Nyan cat…

Memz virus even shows animation and plays sounds of the meme. This trojan compromises the machine and disrupts the system, but it also can install ransomware or other cyber threats and run additional programs or scripts. For that reason, you should react as soon as possible to terminate the trojan before it is too late.

You should remove Memz virus from the machine once you encounter any malware infection indicating symptoms and clean the machine using anti-malware tools. This is the best solution for any of the trojan versions. However, the destructive trojan variant overwrites the first 64 KB of the boot drive, so you need to use bootable recovery media like Windows installation disk. This way, you may recover the system, as experts[3] may recommend.

In other instances, employ an automatic anti-malware tool, such as SpyHunter 5Combo Cleaner or Malwarebytes, and scan the device entirely for the proper Memz virus removal. Keep in mind that if you open the Task Manager for the process, your computer will immediately crash, causing even more issues. So you should reboot the PC into Safe Mode and then perform a full system scan from there – we explain how below. After you delete the malware, you should also employ ReimageIntego to fix any post-infection damage that Windows could have suffered in the process.

Memz virus is a known cyber threat that malicious actors can get online from one another. This virus loads multiple payloads one after the other.

In most cases, threats like this malware get on the system from emails via infected files or background scripts loaded from fake updates/malicious websites. Those emails can pose as messages from customer support or shipping services because such emails are frequent when people tend to shop online these days.

Unfortunately, the common type and names of well-known companies or services help to trick users into opening the email and the file attached that contains malicious macros or direct virus payload. The only thing the user needs to do to launch the trojan or ransomware is to open the downloaded file on the machine.

However, such malicious threats can be delivered by the malicious actors themselves because criminals managed to deliver it online for free on various platforms and dark web forums. So victims may become affected during more targeted attacks. Keep paying close attention to emails and content you visit, click on, and get exposed to online to avoid cyber infections in the future.

Terminate the Memz trojan and clean the damage, other programs, and files

Since the malware categorizes as a trojan, it shows up on the machine out of nowhere and can run various processes besides the typical system changes and features that can be noticed by the victim. No matter which version of this trojan you got the full Memz virus removal is crucial for the system.

Make sure to remove Memz virus as soon as possible so damage can be avoided and the computer becomes virus-free again. We would recommend using professional anti-malware tools and rely on trustworthy sources to get the programs. Rely on SpyHunter 5Combo Cleaner, or Malwarebytes for malware elimination, and later scan the computer with powerful recovery software, such as ReimageIntego – it would fix system lag, errors, or crashes due to damaged system files.

You may need some additional help to remove Memz trojan completely, so rely on Safe Mode with Networking and then try to scan the machine with anti-malware

Finally, you should always think about the protection of crypto-ransomwares. In order to protect your computer from Memz and other ransomwares, use a reputable anti-spyware, such as ReimageIntego, SpyHunter 5Combo Cleaner or Malwarebytes

You can quickly scan the QR code with your mobile device and have Memz virus manual removal instructions right in your pocket.