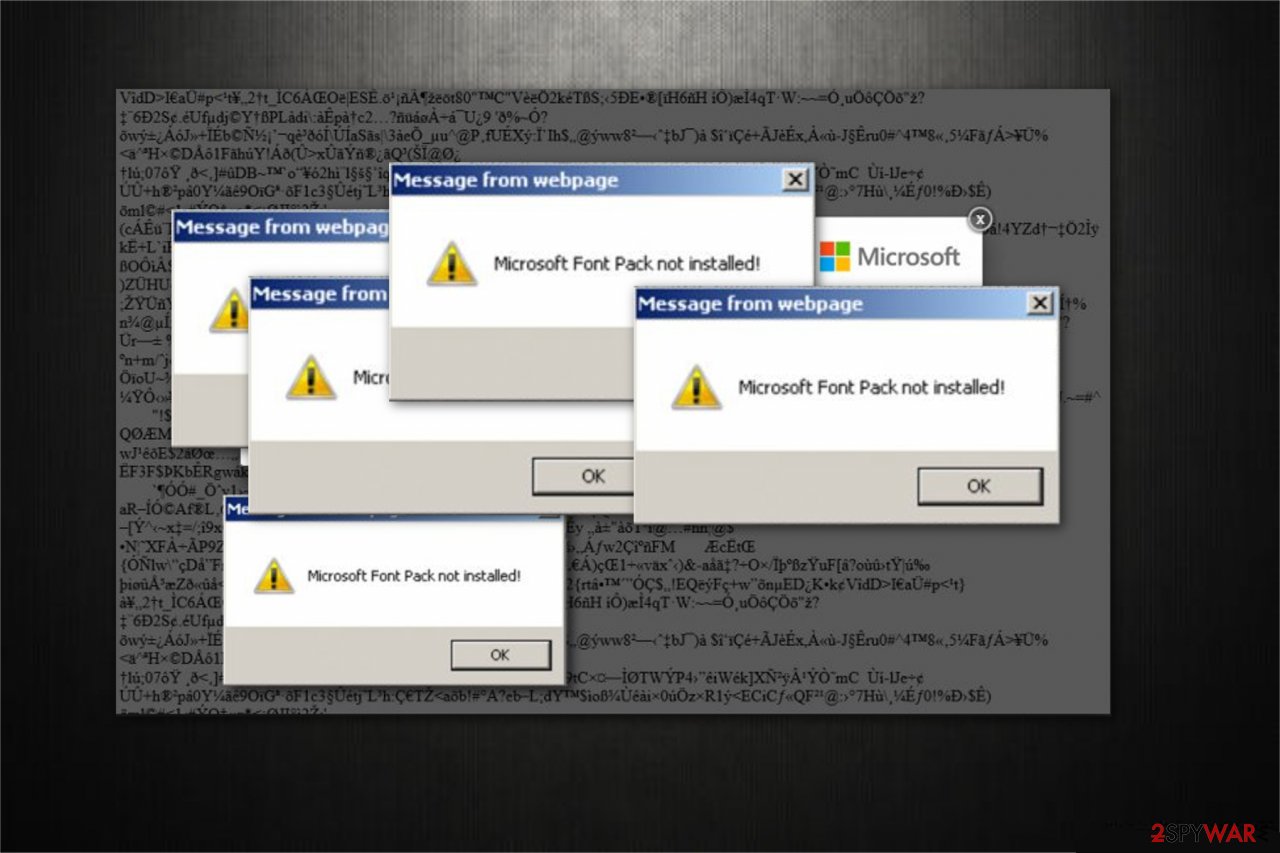 “Microsoft Font Pack Was Not Found” scam is a fraudulent error message which pops up on a malicious websites. Usually, people are redirected to such page by a potentially unwanted program (PUP). The fake pop-up claims that it cannot load the content since the system is missing specific fonts and offers to download an update.

Unfortunately, Microsoft Font Pack Was Not Found error is not linked to Microsoft in any way. In fact, it is designed to trick naive computer users into downloading various computer viruses, including malware, spyware or even ransomware[1]. Additionally, there is a similar malicious pop-up called “Adobe Flash Player Was Not Found” which also aims to infect victims' systems.

In case you have encountered “Microsoft Font Pack Was Not Found” scam, immediately leave the malicious website and head to the elimination instructions. You can find them at the end of this article. However, if you have downloaded the fake update, uninstalling the adware might not help. 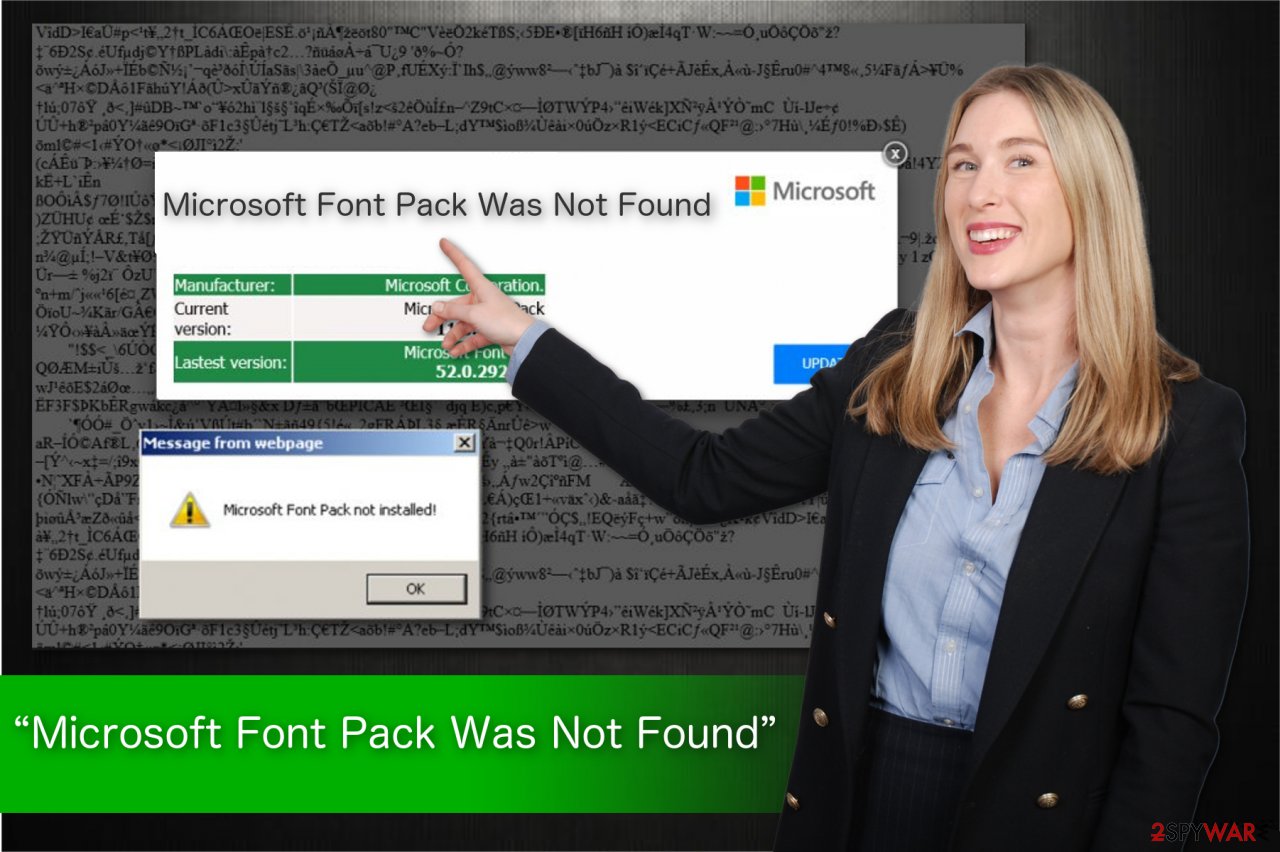 “Microsoft Font Pack Was Not Found” scam is a fake error message which claims that the system needs to update Microsoft fonts.

The fraudulent Microsoft font pack update may contain malware and cause privacy-related issues. Malicious programs might be designed to steal your personal details, such as credit card details, online banking logins, passwords and other valuable information. Thus, you should employ a professional malware removal tool to run a full system scan and get rid of “Microsoft Font Pack Was Not Found”.

You can remove “Microsoft Font Pack Was Not Found” virus with Reimage Reimage Cleaner Intego or another security software. However, remember that your computer is at risk if you have clicked on any content on the malicious website. Therefore, the best decision would be to use an antivirus software at all times and not try to get rid of the adware by yourself.

If you are not aware how to start “Microsoft Font Pack Was Not Found” removal, head straight to the elimination guidelines below. They are simple and easy to use for an inexperienced computer user. Thus, you will be able to protect and clean your system from malware and potentially unwanted programs with minimal effort.

Since people underestimate various computer threats, they do not take every possible precautionary measure to protect their computers. Likewise, the developers of less than reliable software employ a popular marketing technique, called bundling[2], to distribute their products.

Potentially unwanted programs are infused into the packages of free software and offered as one. Note that developers never disclose the information about software-bundles in Quick/Recommended setup of the installer. Therefore, you should avoid these parameters and pick Custom or Advanced instead.

“Microsoft Font Pack Was Not Found” virus might be temporarily stopped by closing the tab or window. However, this won't prevent the fake error from reappearing in the future. Therefore, you should take appropriate measures to get rid of this malicious program for good.

There are two options for “Microsoft Font Pack Was Not Found” removal — you can either follow the manual elimination instructions or employ a robust antivirus tool to help you. Note that you can only uninstall the adware manually if you haven't clicked on or downloaded the fake update. The termination guide is attached at the end of this article.

Otherwise, you should get a professional security software and let it scan your computer files thoroughly to remove “Microsoft Font Pack Was Not Found.” You can find our recommended malware removal tools below.

To remove “Microsoft Font Pack Was Not Found” scam, follow these steps:

Usually, adware programs do not come alone. Therefore, we advise you to carefully check your Windows system for hidden suspicious entries.

You can fix Microsoft Edge from redirecting you to the shady web page with “Microsoft Font Pack Was Not Found” scam by uninstalling adware-related components.

Once these steps are finished, “Microsoft Font Pack Was Not Found” scam should be removed from your Microsoft Edge browser.

The first thing you should do to stop Chrome redirects to “Microsoft Font Pack Was Not Found” scam is remove the adware program together with its elements. Later, reset your browser to complete the removal.

Erase “Microsoft Font Pack Was Not Found” scam from Safari

You can quickly scan the QR code with your mobile device and have “Microsoft Font Pack Was Not Found” scam manual removal instructions right in your pocket.