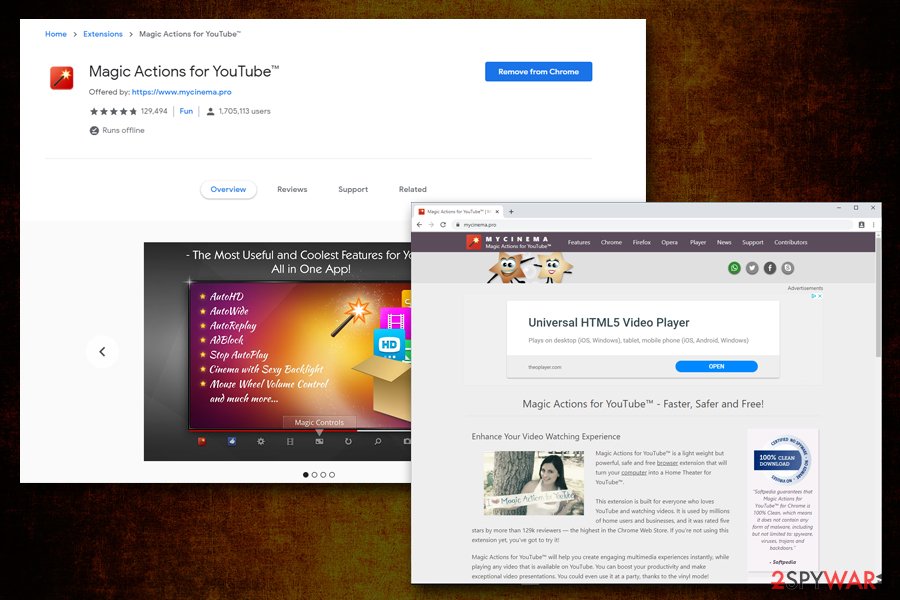 My Cinema Pro is a service that refers to a web browser extension Magic Actions for YouTube, which claims that it can drastically improve your time on spend on the video streaming site. The app can be downloaded from the official web stores like Google Play or might be delivered with the help of software bundles from third-party websites. As of currently, My Cinema Pro has over 1.7 million downloads on Chrome web store. Unfortunately, the download numbers do not represent the quality of the delivered service, as many complained about the app's deceptive features that have been added just recently.

The suspicious activity that My Cinema Pro service includes the appearance of unexpected pop-up ads, which sometimes promote fake updates – including ones for Google Chrome. Those who get tricked by the malvertising campaign might install more potentially unwanted programs or even malware on their machines. Multiple users on Reddit complained that My Cinema Pro has become increasingly intrusive over time, asking users to “check features” or preventing them from updating settings unless they allow ads to be shown.[1] All in all, My Cinema Pro removal is advised, as it seems like developers decided to start using malicious techniques in order to make users click on ads.

According to its developers, My Cinema Pro extension is capable of performing various tweaking on YouTube, customizing the experience of each individual. Here are the features that users can expect after downloading the extension:

In fact, many users were happy with the functionality of the My Cinema Pro extension and the features that it brings to YouTube. However, many were appalled by the developer who started using intrusive techniques, such as opening new tabs automatically, prompting users to update their browsers by wrongly claiming they are out of date and similar behavior. One of the users on Chrome store wrote:[2]

This extension has begun spamming me constantly by opening a new tab just to tell me to update my browser. <…> This is especially obnoxious when it happens 5 times a week on my 12 year old laptop that I use exclusively for YouTube and that can't handle having a ton of tabs open. <…> This is spam. This is hijacking our browsers. We didn't ask for it. We don't want it. Get rid of it or keep getting authentic negative USER reviews.

At any time during their web browsing, users might encounter a prompt that states the following:

You are using an old and insecure version of Chrome. This could compromise your YouTube account and put your private data at risk!
SCAN AND UPDATE
It's Time to Renew…

Regardless of which button users press, My Cinema Pro virus will bring them to the download page of other potentially unwanted programs that might be unsafe. This is a typical tactic that is used by scammers to make users download fake/dubious/malicious applications for profits. 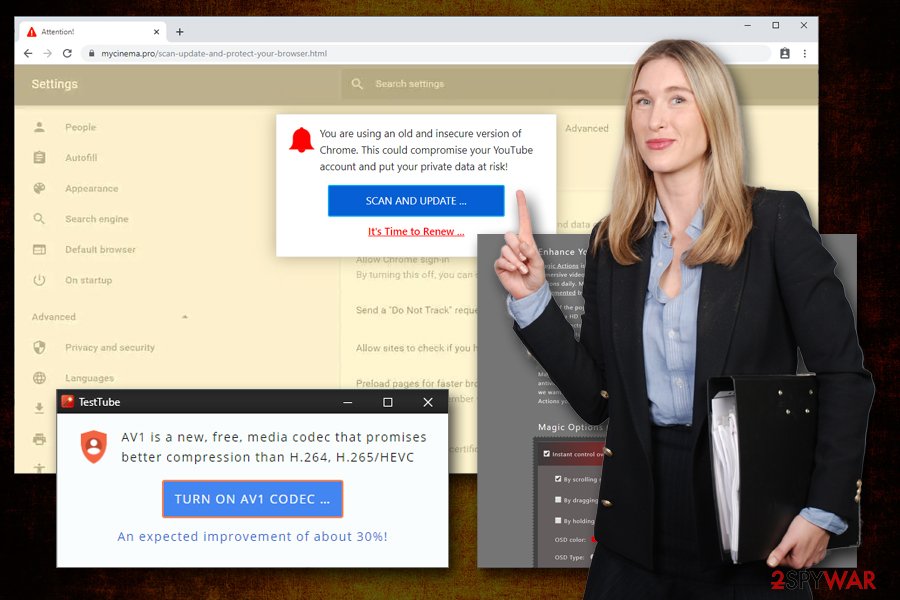 While initially, the My Cinema Pro app might have started as a decent addition to many users' browsers, it definitely managed to ruin its reputation by seeking more income – all by spoiling user experience with fake Chrome updates, pop-ups, new tabs and other behavior that is considered unwanted and even malicious by users.

If you want to get rid of annoying [fake] update prompts and other intrusive behavior, you should remove My Cinema Pro add-on from your browser, and then check for potentially unwanted programs. You can do it by checking our manual guide below or scanning your machine with anti-malware software. Additionally, we also recommend scanning your computer with Reimage Reimage Cleaner Intego for best results.

Ways to avoid unwanted programs on your computer

There are hundreds of thousands of browser extensions developed for all browsers. The main purpose of add-ons is to customize users' experience, add useful functions, and improve the time users have online. Without a doubt, many extensions were extremely successful and managed to earn a lot of money to its developers – maybe because of that, many shady add-ons appeared, aiming to earn a quick buck.

Unfortunately, some low-quality extensions are not there to serve as great additions to web browsing time, but rather there to gather information, show intrusive ads and perform many other unwanted activities that are not welcome. In such cases, these add-ons are considered potentially unwanted – and should be eliminated as soon as possible, as they might put users' online security at risk by directing them to malicious websites or prompting downloads of fake updates.

Installing apps from official sources is a good start, however, it is not an indicator that the extension will be trustworthy. There are hundreds of apps that are being removed from Chrome store regularly,[3] as, due to the number of incoming apps, some malicious ones might slip in as well. Additionally, checking user reviews is not always a good indicator as well, as many developers might engage in writing fake reviews or paying for those. 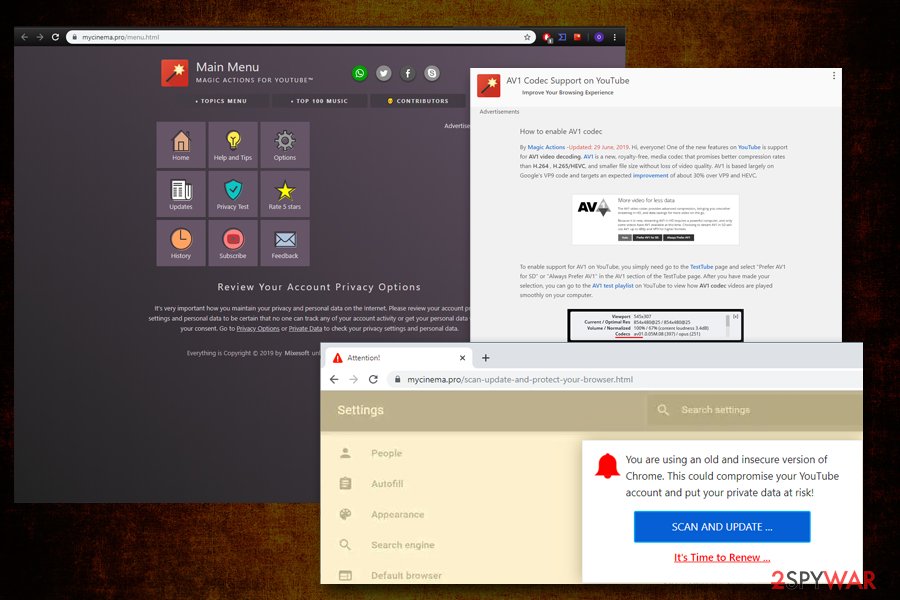 Thus, the best way to determine whether the app is trustworthy is by checking for its suspicious activity online. For example, Reddit reviews can be a good indicator, as well as articles around the net. Finally, you should also pay close attention to software installs – choose Advanced/Custom settings, never rush through steps, and get rid of markings in pre-ticked boxes.

Get rid of Magic Actions for YouTube from Mycinema.pro

Main problems with My Cinema Pro removal might arise when other browser extensions or potentially unwanted programs are installed on the system. Generally, you should be able to click on the add-on and get rid of it via the browser. However, in some cases, a full browser reset might be required – if that is the case, please check the instructions below. Additionally, if your anti-malware scan returns some results, you should reset browsers anyways just to ensure that no settings altered by PUPs remain.

If you are still in doubt whether you should remove My Cinema Pro virus from your computer, you should be aware that the unwanted pop-up ads and fake updates will keep bugging you until you terminate the application for good.

To remove My Cinema Pro, Magic Actions for YouTube and other PUPs from Windows, perform the following steps:

Get rid of My Cinema Pro from Mac OS X system

If you suspect that macOS is suffering from adware or another unwanted app, use the following guide:

Once these steps are finished, My Cinema Pro should be removed from your Microsoft Edge browser.

Make sure you reset Google Chrome if you found unwanted programs installed on your machine:

Uninstall My Cinema Pro from Safari

Your opinion regarding My Cinema Pro Cancel reply

You can quickly scan the QR code with your mobile device and have My Cinema Pro manual removal instructions right in your pocket.