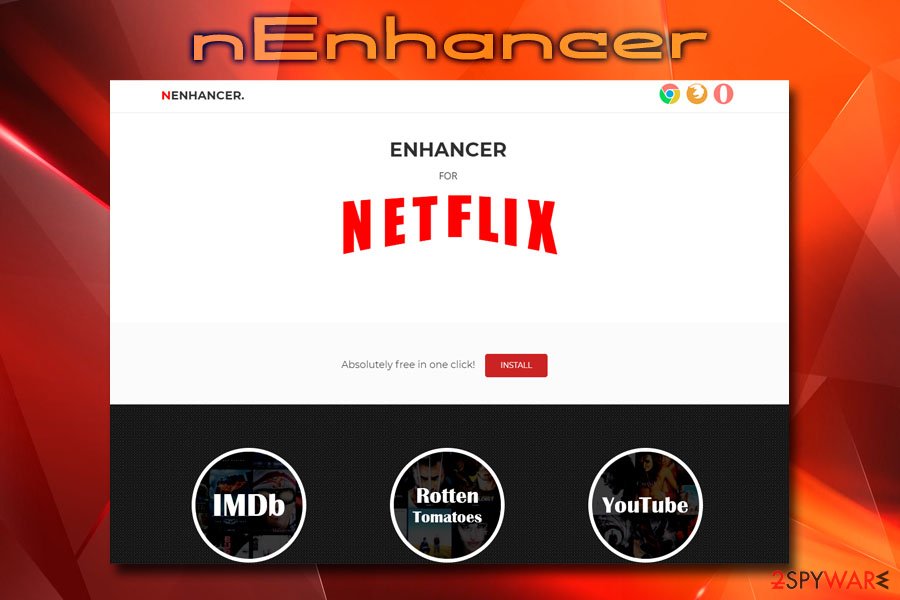 nEnhancer is a browser extension for Google Chrome, which allegedly helps users to enhance Netflix experience by adding IMDB ratings, YouTube trailers, and similar features. It is an ad-supported application, which means that it uses advertisement to generate revenue. However, this is not the worst part of this browser plugin, as multiple reports surfaced that the app is engaging in malicious behavior. According to the security analyst Collin Chaffin,[1] nEnhancer can hijack the user's identity and use it for the affiliated marketing revenue and trick them into granting the app elevated system control permissions. The malware also closely monitors users' behavior, which might expose them to identity fraud or money loss risks. Currently, the download links for nEnhancer virus are mostly terminated (such as Google web store, official site, etc.), but it does not mean that the app cannot be spread with the help of bundled software or installed via dodgy third-party sites.

Ad-supported programs like nEnhancer are generally not considered to be malicious, and you can find countless of such applications on legitimate sources like Google Play or Amazon. Ads is a very well-known source of income for many software and website developers. However, some authors might start playing dirty in order to increase the revenue from ads.

nEnhancer is known to spam users with pop-ups, in-text links, banners, blinking windows, deals, offers, and similar unwanted content, even if another browser, like Internet Explorer, Mozilla Firefox, or Safari is used. While this activity might be considered intrusive, it does sponsor the program's authors. However, when the ads become malicious, it can compromise users' safety and even result in malware infection.

According to the security researcher, nEnhancer initiates multiple malicious activities that resemble malware operation. Once installed, the program does not perform any system modifications for several weeks, and only begins such action after a few weeks of the installation.

nEnhancer malware will then download additional payload that helps cyber criminals to generate revenue on pre-determined domains. According to the analyst, it achieves the goal the following way:[1]

Upon the doomsday countdown, here comes the real reason the author has everyone granting that extra permission for hidden panels……opens up hidden panels in shadow session of you, the user, all while your browser is open an you're working on other things, and begins performing HTTP GETs for all of the tens of thousands of paid affiliate URLs – but appears to again do it in a very sophisticated manner throttling to avoid detection (it was successful on me for many months).

The fact that the app was found to perform multiple activities behind user's back should warrant nEnhancer removal from the system. Due to excessive system modification and heavy persistence techniques, experts recommend using professional security application.

As soon as you remove nEnhancer, you should scan your device with ReimageIntego – this application will ensure your computer is fully recovered from the virus and replace any missing or damaged system files. 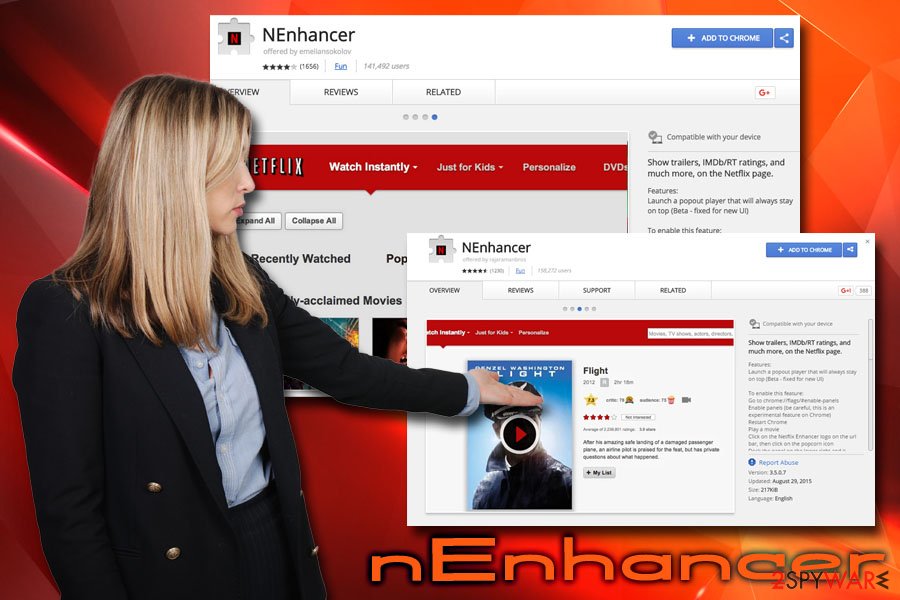 Google App store and similar legitimate sources do perform security checks before the application is approved and released to the public. However, as practice shows, multiple malicious apps managed to slip through Google's security.[2] Luckily, once detected, such programs are quickly eliminated from the official sources.[3]

In contrary, third-party sites that are not governed by any major company might indulge in the distribution of unsafe applications due to lack of security measures and extensive checks. Therefore, while there is no guarantee that all apps from legitimate sources are safe, more than 99% most likely are.

Thus, do not try to download programs from suspicious sites, as it can even result in malware infection. When downloading and installing freeware, make sure you picked Advanced/Custom installation settings instead of Recommended ones and terminated all the optional components before finalizing the process.

Additionally, you should always keep your system updated, employ a reputable anti-malware software, avoid clicking on suspicious links and use such tools like ad-block, Firewall, and similar.

Remove nEnhancer and all its components with automated software

As we already mentioned, due to the app engaging in malicious activity, the best way to remove nEnhancer virus is by employing a reputable security application. There are plenty on the market available, so choose the one that suits you the most. However, make sure you avoid rogue anti-spyware software, as it will not be able to complete nEnhancer removal, but instead, cause more trouble.

In case you are struggling with the process, we suggest you enter Safe Mode with Networking. This environment is dedicated to troubleshooting various issues, and it can prevent malware from interfering with security software operation.

You should enter Safe Mode with Networking to ensure prompt nEnhancer virus removal:

System Restore can also be used for full termination:

Finally, you should always think about the protection of crypto-ransomwares. In order to protect your computer from nEnhancer and other ransomwares, use a reputable anti-spyware, such as ReimageIntego, SpyHunter 5Combo Cleaner or Malwarebytes

Your opinion regarding nEnhancer Cancel reply

You can quickly scan the QR code with your mobile device and have nEnhancer manual removal instructions right in your pocket.