Ninja_gaiver@aol.com ransomware. How dangerous is it?

Ninja_gaiver@aol.com ransomware virus is just another member of a notorious group of ransomware viruses. According to IT experts, it could be related to .xtbl ransomware and other viruses of this family. If it is true, then you should be extremely careful while browsing the Internet because it is an extremely dangerous virus that can pose a serious danger to your files. Once it infiltrates the system, it attacks victim’s personal documents and files and encrypts them with the specific encryption algorithm. If you are infected, stay calm because you can still remove Ninja_gaiver@aol.com ransomware. For that, you need to disconnect your infected device from the Internet, run a full system scan with Reimage Reimage Cleaner Intego and get rid of malicious files that belong to this ransomware. Next, you should try to recover your files. For that, scroll down to find 2-spyware.com tips.

We should all agree that Ninja_gaiver@aol.com virus is one of the most complex computer viruses. With the help of an exquisite algorithm, it is able to affect almost every file which is kelp on the system. Moreover, it urges the victims to remit the payment and hurries them by setting a fixed time period. Certainly, if the locked files contain the work report you have been working for several months, you might rush to transfer several hundreds of dollars in the hope of returning the files. However, you need to come to terms with the fact that you are dealing with computer hackers. Thus, get acquainted with our ninja_gaiver@aol.com removal methods.

It seemed that the hackers behind @aol and .xtbl viruses decided to step down from ransomware as there haven‘t been similar viruses released for a while. However, this maneuver seems to have been only a diversion. They have returned with a blast and enjoy having a virtual community under their terror again. Lately, they struck with their another creation – grand_car@aol.com virus. It also possesses the same feature as this malware. Speaking of which, it has been granted such title since the threat attaches ninja_gaiver@aol.com.xtbl extension to the locked files. The virus is still being analyzed, so it is easy to present the findings. Nonetheless, virus researchers suspect that this time, the encryption technology is different. The virus deviated from employing AES and RSA to XOR mask. In addition, the threat appends .777 extension to the files. 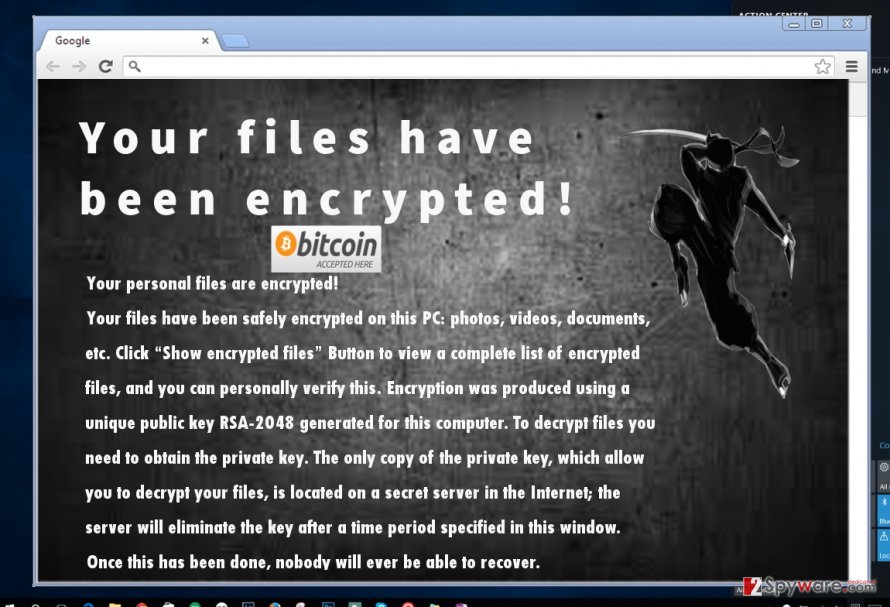 Like other types of this ransomware group, Ninja_gaiver@aol.com ransomware does not indicate the ransom note in each .txt message. It usually indicates the sum once a victim contacts the hacker using the given email address. It is suspected that the sum may vary from 200 dollars to 1600 USD. Since this year has granted a full bouquet of diverse ransomware threat, IT experts are not empty-handed as well. You might try one of the released free decrypters to recover the files. Nonetheless, do not get deceived into installing Ninja Gaiver decrypter promoted by the hackers. It might decrypt some of the files, but the probability of making the matters worse is high.

It is likely that it exploited existing system vulnerabilities and infected the computer when you opened a spam email. Currently, there is a trend to disperse Ninja Gaiver malware and similar threats via spam messages. Be vigilant when you are about to open the email received from a governmental institution. It is common bait. It would be best to verify the sender by contacting the company or the institution directly to avoid finding yourself infected with ninja_gaiver@aol.com ransomware. Alternatively, the threat might attempt to sneak into the computer in the disguise of a trojan or an exploit kit. This method is a lot more insidious and dangerous. While in the first case, your cautiousness might save from the ransomware, regarding trojans, only a proper security program will be of use. Install, for example, Reimage Reimage Cleaner Intego and update it regularly, so it could detect suspicious files and computer malware before they sneak into the system.

Regarding ninja_gaiver@aol.com removal options, unfortunately, there are not many of them. The only viable method is to use an anti-spyware application, e.g. Reimage Reimage Cleaner Intego or Malwarebytes, to get rid of the files. You can be sure that it will remove ninja_gaiver@aol.com ransomware virus completely. Unfortunately, the program does not unblock the files. You can use either one of this free decrypters. They might be of help since the ransomware belongs to .xtbl virus group. Additionally, when ninja_gaiver@aol.com virus is fully exterminated, perform regular back-ups and store the copies of your files in a trusted digital storage domain. Do not keep them all in the computer since current ransomware tend to delete shadow copies as well.

Guide which is presented above is supposed to help you remove Ninja_gaiver@aol.com from your computer. To recover your encrypted files, we recommend using a detailed guide prepared by 2-spyware.com security experts.

There are several methods to recover files encrypted by ninja_gaiver@aol.com virus. All of them are listed below. Please, do NOT pay the ransomware to support cyber criminals and encourage them to start designing a new ransomware virus.

If your files are encrypted by Ninja_gaiver@aol.com, you can use several methods to restore them:

Recover your files affected by ninja_gaiver@aol.com virus with the help of Data Recovery Pro

Data Recovery Pro is a highly effective tool to recover erased data. You can try it for recovering your encrypted files as well.

Use Windows Previous Versions feature to restore your most important files

If System Restore function was enabled on your computer before ninja_gaiver@aol.com virus showed up, you are free to try to option:

Decrypting files affected by ninja_gaiver@aol.com with the special decrypt software

You can rely on free ninja_gaiver@aol.com decrypters that have already been presented by security experts. They should help you recover your files affected by this ransomware.

Finally, you should always think about the protection of crypto-ransomwares. In order to protect your computer from Ninja_gaiver@aol.com and other ransomwares, use a reputable anti-spyware, such as Reimage Reimage Cleaner Intego, SpyHunter 5Combo Cleaner or Malwarebytes

You can quickly scan the QR code with your mobile device and have Ninja_gaiver@aol.com ransomware virus manual removal instructions right in your pocket.