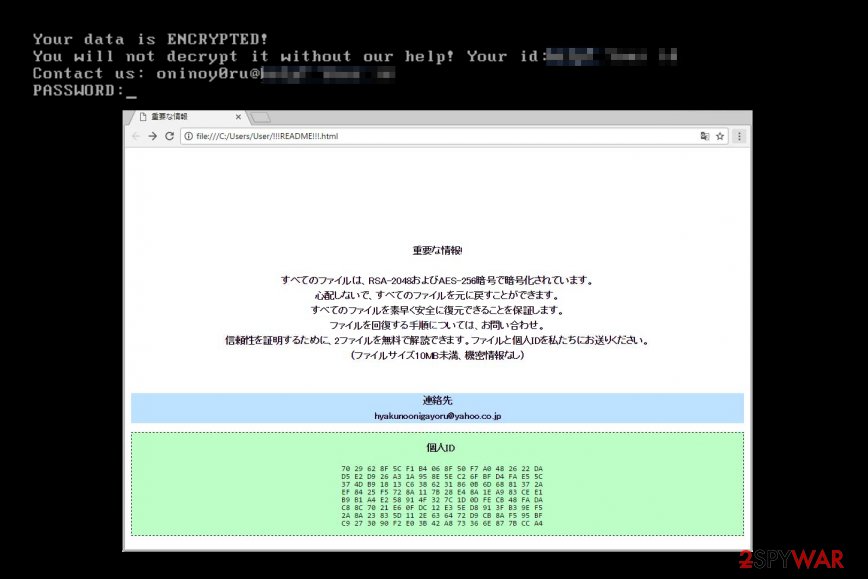 ONI ransomware is a malicious file-encoding virus that is mainly used in cyber attacks against Japanese companies. It shares similarities with the infamous Globe Imposter virus. Once installed, the malware also infects the system with a Remote Access Trojan (RAT) that is used to take full control of the victim’s computer system. Researchers suggest that the malware has been developed by the same threat actors who created MBR-ONI bootkit ransomware. Once there, the virus encrypts files and appends .ONI file extension. The ransom note used by ONI cryptovirus is RESTORE_ONI_FILES.txt.

As soon as cybercriminals get remote access to the target computer network, they start trying to hack domain administrator’s account and servers. Firstly, hackers steal valuable data, and then they upload the ransomware on the target computers. The initial ransomware variant encrypts files and adds .oni extensions to them[1].

It appears that there are two variants of the described ransomware – ONI ransomware and MBR-ONI ransomware. As the name of the second virus suggests, it meddles with compromised computer’s Master Boot Record (a technique used by NotPetya and Bad Rabbit ransomware viruses).

Once installed, ONI virus drops its malicious payload, restarts the computer and then displays the following message on the victim’s computer screen:

Your data is ENCRYPTED!
You will not decrypt it without our help! Your ID:
Contact us:
Password:

The ONI ransomware displays a slightly different ransom note called !!!README!!!.html. It addresses the victim in the Japanese language. The ransomware also asks to write to hyakunoonigayoru@yahoo.co.jp to get details regarding data recovery. It also claims that data was corrupted using RSA-2048 and AES-256 ciphers. Besides, this malware variant adds .oni file extensions to encrypted files.

Researchers from Cybereason say[2] that hackers used MBR-ONI virus as a wiper to hide their hacking operation. The hacking attacks lasted from three to nine months and ended with attempts to encode data on hundreds of compromised computers (fraudsters wanted to lock data on all machines at the same time).

No matter which version affected your computer, an immediate ONI ransomware removal is required, says Dieviren.de team[3]. We strongly recommend using instructions added at the end of this article and anti-malware software like Reimage Reimage Cleaner Intego to kill the ransomware as soon as possible.

Users who attempt to remove ONI virus manually often encounter problems and cause even more damage to the system, so we do not recommend making the same mistake. 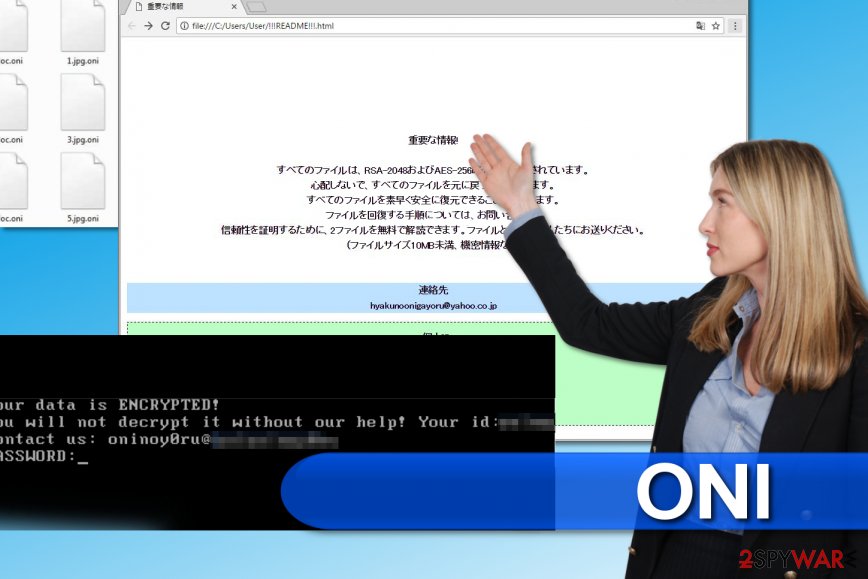 There are two variants of ONI ransomware: one operates as a traditional file-encrypting virus and the other replaces Master Boot Record the same way that Bad Rabbit ransomware did.

If your files were encrypted by the described ransomware variant, please do not think about manual ONI ransomware removal. The malware has to be wiped from your computer professionally, so we strongly suggest using anti-malware software recommended by our team.

You can find some suggestions in the article bellow. However, you will need to follow certain instructions to perform clean boot so that you could remove ONI ransomware from the system.

To remove ONI malware, use the guidelines on how to perform clean system boot first. Once the system is prepared, download and execute anti-malware software to delete the virus for you.

You can try to use the System Restore function to fix your computer.

Guide which is presented above is supposed to help you remove ONI from your computer. To recover your encrypted files, we recommend using a detailed guide prepared by 2-spyware.com security experts.

If your files are encrypted by ONI, you can use several methods to restore them:

This option can be used in case you created System Restore point before ransomware attack.

In case your computer was infected with the basic version of Oni, and your Master Boot Record wasn't altered, try to restore your files using ShadowExplorer.

No decryption tools available at the moment

Oni decryptor is not available yet.

Finally, you should always think about the protection of crypto-ransomwares. In order to protect your computer from ONI and other ransomwares, use a reputable anti-spyware, such as Reimage Reimage Cleaner Intego, SpyHunter 5Combo Cleaner or Malwarebytes

You can quickly scan the QR code with your mobile device and have ONI ransomware virus manual removal instructions right in your pocket.