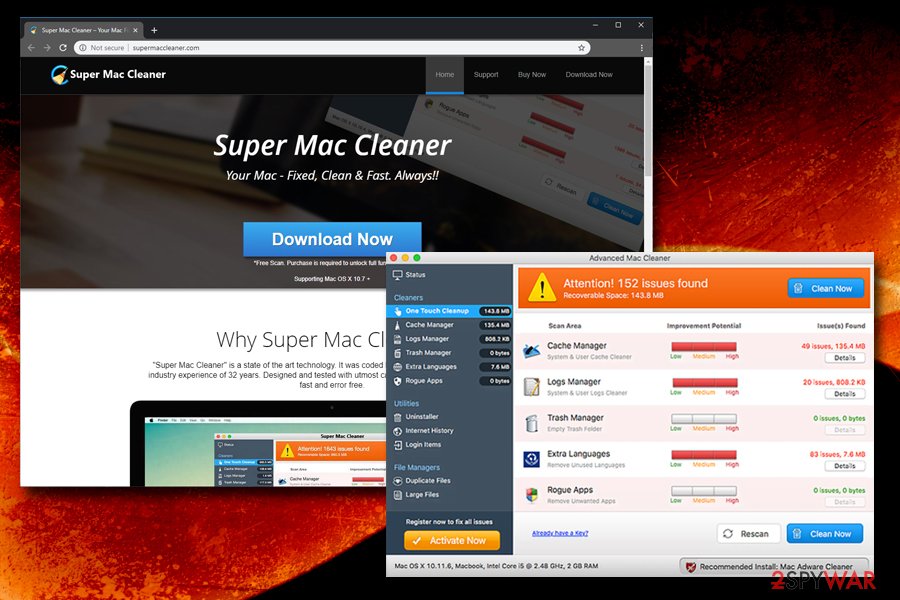 Super Mac Cleaner is another fake system optimizer and a potentially unwanted program created for Mac operating systems. “The state of the art technology,” as developers PCVARK refer to this tool, which promises to clean and fix various issues on Mac, is nothing but a scam that displays fake results in order to make users buy its full version. Users might find it performing scans even without them purposely installing it. This is because Super Mac Cleaner is usually circulated with the help of software bundling[1] – a deceptive distribution technique used by freeware and shareware developers. Additionally, the PUP might also be obtained on the official website supermaccleaner.com or can be extensively promoted by ad-supported software.

PCVARK is one of the best-known PUP developers with quite a low reputation,[2] responsible for such bloatware like Advanced Mac Cleaner, Malware Crusher, Similar Photo Cleaner, and many others. What differentiates these apps, along with Super Mac Cleaner form legitimate software is the pure chase for profit, without delivering any positive results to the end user. Therefore, such tools are often called a scam, although, due to various legal reasons, cannot be classified as malware.

For that reason, users should avoid or, if infected, remove Super Mac Cleaner virus as soon as they notice its presence on the device. By no means should such useless software be downloaded in the first place – the promises of faster and cleaner Mac are merely a lie.

Despite the flashy official web page, Super Mac Cleaner authors do not hurry to give any warranties:[3]

Although Super Mac Cleaner attempts to provide accurate content on the website, it makes no warranty that such contents are accurate or suitable for any particular purpose or will meet your requirements or will be available on an uninterrupted, timely, secure, or error-free basis.

To conclude, we suggest you proceed with Super Mac Cleaner removal, especially if the app appeared after freeware installation. Instead, you should use reputable tools like Reimage Reimage Cleaner Intego or SpyHunter 5Combo Cleaner (that would not tamper with your system and actually do some work that is needed) to take care of your device. 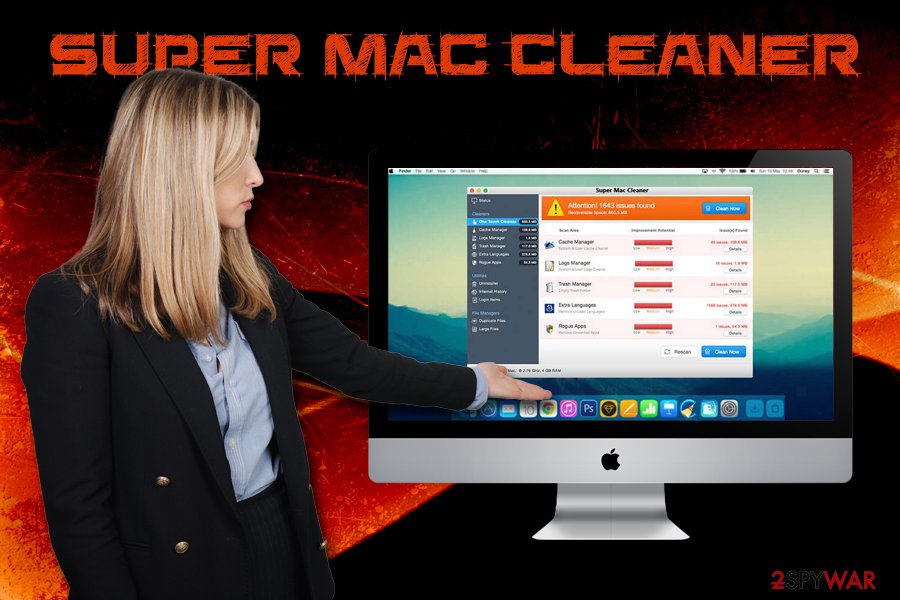 Software bundling is the source of the computing evil – here's why

Rogue applications like scareware and bloatware are regulars when it comes to bundled software. In most cases, the apps that are offered are useless or even harmful, but they do make some money for its developers – and that's the goal. Unfortunately, many of such programs cannot be officially classified as malicious, as they do not directly harm the system (in most cases). However, PUPs have the ability to expose users to online security hazards or simply scam them into paying money due to their lack of knowledge in the IT field, which is unfair.

Free software developers have to monetize to fund their production costs. Instead of selling their software, however, they rely on advertisement profits, consequently offering their products for free. Unfortunately, while this method works great for developers, it might and most likely will be harmful for the end user. Thus, every time you download a free application, you should be careful with additional components that are added to the original software.

All websites that offer freeware or shareware bundle software be it reputable or unknown one. Thus, when dealing with the installation wizard, do not rush through steps, read through installation instructions carefully, and opt for Custom/Advanced installation settings to remove unwanted applications before they get installed on your device.

Alternatively, you can use security software that specializes in PUP detection for Super Mac Cleaner removal. This method is much quicker – it will take you only a few minutes. Besides, rogue software tends to install additional applications without permission, there is a chance the system is infected with other threats.

You can quickly scan the QR code with your mobile device and have Super Mac Cleaner manual removal instructions right in your pocket.